Earlier today I broke down play in which Charlie Whitehurst demonstrated the ability to look off both linebackers and safeties and complete a pass down the seam. This was an encouraging play but taken alone doesn't really tell you much. To add a little bit to the idea that Whitehurst looks improved from his play last year, I wanted to break down another very impressive throw he made against the Chargers.

Remember how I wrote that I'd like to see Charlie show some brass balls a little more often? Well, he certainly did that later in the third quarter in a 1st and 10 situation. The Hawks were driving downfield, at the Chargers 38 yard line, with 5:02 left in the frame.

Whitehurst is in the shotgun and you'll see slot receiver Chris Carter run a seam route right up the middle. 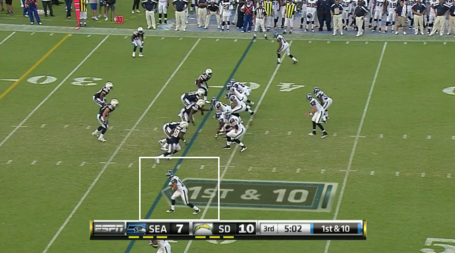 Hawks in a three receiver set here with Whitehurst in the shotgun. Leon Washington is to his right and it looks like Doug Baldwin out there on the right wing. The ball is snapped and the Chargers bring a delayed linebacker blitz that forces Whitehurst to make a quick throw. 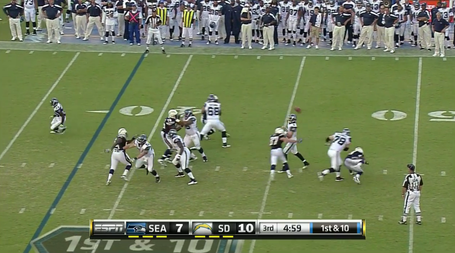 Here you can see LB Bront Bird (inexplicably #97 as a linebacker) just about to hit Charlie. For his part, Charlie sees the pressure but stands tall and delivers a tough pass down the seam knowing he's going to get internal injuries with the oncoming hit. Brass balls... good to see. (I don't want to see his balls, just show me that he has them.. yeah.) 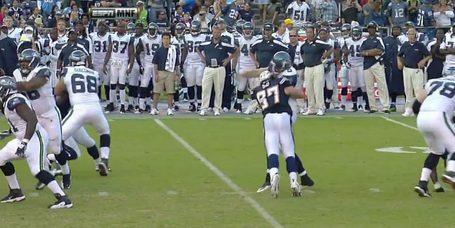 Charlie makes the throw and takes the hit.

Throw is on the money to Chris Carter, who, in my opinion, makes the catch. However, it's ruled incomplete because he bobbles it while taking a hit and falling to the ground, and the replay is inconclusive. Oh well, the point is that Charlie put it on the money in the face of an oncoming blitz and didn't panic.

Not too shabby, Charlie. Keep that up.

Again, just one play but it's encouraging. Charlie impressed me in training camp and has looked the part more than he did last season. Whether he's got a chance to challenge Tarvaris Jackson for the starting gig is to be determined but at worst you have a guy that can come in as a backup and make these types of throws.