Because Tarvaris Jackson didn't really have time to make many throws to Sidney Rice on Saturday I went back to the tape from last year and wanted to highlight this play, because well, Sidney Rice is awesome.

I broke down another play from this game a few weeks ago that demonstrated Rice's ability to adjust his body in the air to make the catch, and you can read that here. The following play is similar but ultimately cooler because it involves both diving and a touchdown. In short, Tarvaris Jackson hooks up with him for a score that should give you an idea of the type of playmaker Rice is.

This segment of the Seahawks Replay Booth will not require much of an introduction because it's a pretty simple play. The Vikings are driving and sit on the 6 yard line in 2nd and Goal. Sidney Rice is the split end out to the right, with Tarvaris Jackson under center. 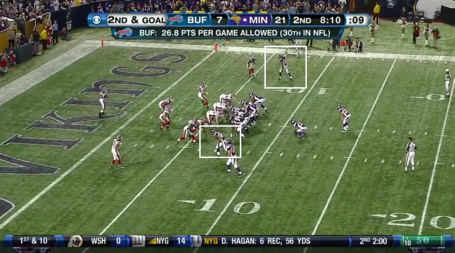 Below, ball is snapped, it's a play action fake to Toby Gerheart. Visanthe Shiancoe (I think) is going to run a seam route from the slot but he gets covered up nicely by the linebacker in his zone. That was Jackson's first read and he doesn't force it. Good job! 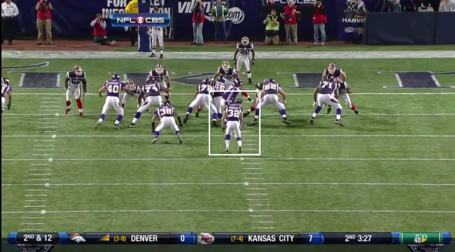 I suppose there was a split second where he could have threaded the needle here but when you watch it in real time the linebacker has Shiancoe pretty blanketed.

Jackson's second read here is a guy name Sidney Rice. He's got the corner in one-on-one coverage and runs an out route 5 yards into the endzone. Jackson moves out of the pocket to his right, whether it's by design or improvised, I don't know.

You can see Jackson drifting to his right and Rice has managed to gain just enough separation. It's still a pretty tough throw on the run with the coverage Rice is facing. Jackson puts the ball where no one but Rice can get it.

This is what they like to call "full extension."

Rotates his body mid-air after plucking the ball so the referees cannot rule he trapped it against the ground. Overall a pretty impressive throw and catch by Jackson and Rice. Let's see some of this on Saturday!!