For Pete Carroll's Seahawks, It's All About The Ball

Share All sharing options for: For Pete Carroll's Seahawks, It's All About The Ball

My high school junior varsity basketball coach was the most intense person I've ever met. Like, he broke his hand punching a wall playing pickup basketball against a bunch of high school kids kind of intense. He was the kind of guy that later, when I was on varsity my last couple of years, would come into the locker room during his own JV game, when we were getting dressed, sort of smile at us, say "I'm gonna go get tossed," walk back out the door to the court, and a few minutes later he'd come back in after getting ejected and just hang out with us until the JV game was over. He was a good motivator, but he was a little crazy.

But he was also smart. One thing I used to love about him was that he would randomly get up and yell "GET THE BALL!" when he wanted us to completely mug an opposing player. It didn't matter if you fouled him, "just get the damn ball." It was really a euphemism for "foul the dude" but more often than not, when he'd yell that we'd get so aggressive that we'd actually steal the ball and go the other way with it. It's all about attitude. When your main purpose is to steal the ball and you focus entirely on it, it's surprising how easy it is to actually succeed at it.

If you know Pete Carroll's defensive philosophy or just philosophy of football in general, you know that one of his catch phrases is "it's all about the ball." He stresses taking care of the football on offense above all else, and taking the ball away on defense above all else. During his days at USC, the Trojans would reportedly be seen trying to strip the ball 40 or 50 times a game (to a normal team's 20 or 30... it's not an exact science and I'm not sure if anyone keeps official stats on that, but from what I've read USC was notorious for this). To hell if they missed the tackle on the attempt, getting the ball away from the offense takes precedent.

The Hawks spend a significant amount of time at each practice in drills that enforce this philosophy on both sides of the ball --  strip drills and fumble recovery drills on defense, ball security drills on offense.

Now, he's with the Seahawks, and nothing has changed. "It's been our main theme and our approach in our football for as long as I can remember," Carroll said. "It's about taking care of the football and getting it. It's not just one side, it's not just giving up (the ball), it's getting the ball, too. The defense can balance out a mistake or two by an offense by taking the football away. So it's the No. 1 emphasis in the program."

This cornerstone of doctrine was such a point of emphasis at USC because winning the turnover battle (a positive or even ratio of forced turnovers to your own turnovers) often means winning the game. USC was 53-0 during Carroll's time there with an even or plus turnover ratio. They had the best turnover margin in the country during Carroll's time there by a LONG SHOT. As that ESPN article pointed out back in Sept '08, "USC hasn't merely been good in the turnover margin category since Pete Carroll became head coach. The Trojans have been more dominant than the rest of the country. Although some believe that turnover margin is partly a product of luck from the way the ball bounces, there is strong evidence that it also can be a product of coaching."

There's a correlation suggested there that a new coaching staff that narrows its focus and places an emphasis on the turnover margin can have real results. At USC, Carroll's teams usually met their goal of a positive or neutral margin and won a lot of games along the way, and it can be partly attributed to the fact they made it a focal point of practice.

TURNOVER THURSDAYS? That's not just an alliterative way to spice up the week's practice, it's a systematic method of instilling that 'get the ball' mentality. This mentality percolated into the minds of the USC players and in turn translated into their play.

That's why I'm not even remotely surprised that during Saturday's game against the Vikings, a couple of ex-Trojans forced fumbles on back to back plays.

The plays came with about 10:00 left in the 4th quarter, the Hawks down 13-7. The Vikings had strung together little drive and were threatening at the Hawks 26 yard line.

2nd and 5. The Vikings Joe Webb drops back to pass and the pocket collapses around him. He steps up and hits his outlet, running back Lorenzo Booker. Weakside linebacker Malcolm Smith takes a good angle on him and instinctively employs the wrapup-punch tackle (I don't really know what else to call it-- if there's a technical name let me know). 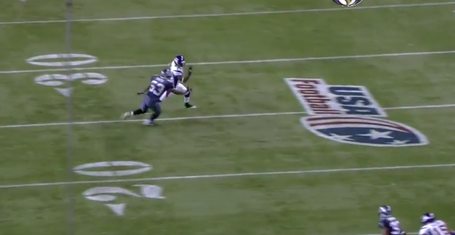 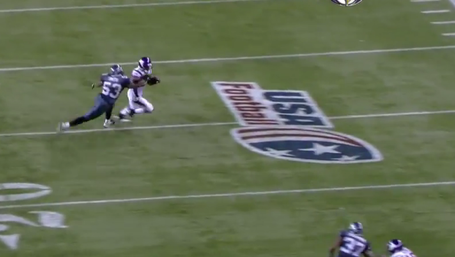 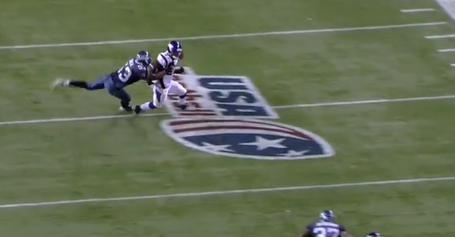 Kind of hard to see, but he BLOINKS the ball out of Booker's hands with his left fist as he's wrapping up -- a great play-- but the ball unfortunately flies out of bounds. Minnesota retains possession but are now faced with a 3rd and 4.

Vikings come out in a three receiver, two back set. Ball is snapped, Webb play action fakes the draw and rolls to his right. WR Emmanuel Arceneaux runs from the left on a deep drag and Webb hits him on the run beautifully. Arceneaux makes the catch and Seahawks safety Atari Bigby makes a facepalm-inducing play on the ball carrier. 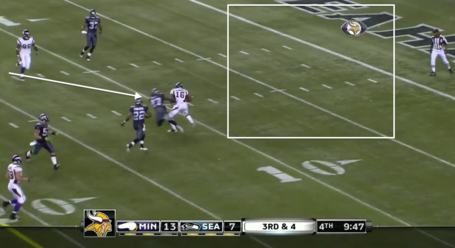 You can see the arrow, which indicates where Arceneaux has come from. You can also see Bigby completely whiff on the tackle, leaving nothing but green between the ex-CFL star and the promised land. Luckily for Bigby, Josh Pinkard is here to save the day.

BLOINK! (you can just make out the ball flying away and about to go into and out of the back of the endzone for a touchback). Touchdown saving play by the young safety.

Two plays in a row, two Trojans punching the ball out. It's not a coincidence, it's a byproduct. Every football player is taught this as a fundamental when they first start playing in Pop Warner but I would guess very few coaches emphasize it as much as Pete Carroll does, especially at this level. He hammers it into the collective conscious of every defensive player with rhetoric and repetition on a daily basis. (especially on Turnover Thursdays, I would guess).

This type of play is going to be of paramount importance to this young Seahawks defense in 2011. They're going to give up a LOT of yards, mark my words. Both on the ground and through the air. Don't freak out when they do.They're going to be frustrating at times. They're not going to get the type of pressure on the QB that you'd like. They're young, and they'll struggle at times.

Forcing turnovers will be the way to balance this. You can give up 99 yards as long as you make the turnover on the 1 yard line. That's the bend-but-don't -break philosophy. A key turnover here or there will be the difference between a win and a loss in a few games this year, I'd bet on it.

The Seahawks finished with a -9 turnover ratio in year one of Carroll's stewardship. 2nd worst in the NFC and near-last in the NFL. Not ... gonna... cut it.

While at USC, by my calculations, Pete Carroll finished with a +107 turnover margin from 2001-2009. Damn. Seriously, damn. The NFL is a whole new ballgame, but the turnover margin is just as important. Teams with a plus or even turnover margin won something like 85% of the time in 2010. It's not rocket surgery trying to figure out why Carroll is obsessed with it.

Every day is Turnover Thursday in Pete's world.