Share All sharing options for: Seahawks Playbook: Looking Back At Charlie Whitehurst's 3rd Quarter Scoring Drive Vs The Vikings

In the third quarter of last Saturday's Vikings game, Charlie Whitehurst moved the chains for the Seahawk's only touchdown. It stirred up some controversy about who the Seahawks starting QB should be, and there were arguments on both sides of the coin about it.

He looked a lot better than Tarvaris Jackson, but was playing against second string players and with a very different set of playcalls.

Regardless, I tried to look at a few things: How much was Charlie blitzed? How many reads did Charlie make? These are the questions I wanted to answer. Here is what I found.

8:34 to go 3Q. Seahawks First Possession of the 2nd Half. Richard Sherman fields the punt and is dumped at the 11 yard line.

Run right to Thomas Clayton for -3 yards. Defensive penetration kills this play. This drive is not off to a good start. Ball at the 8. 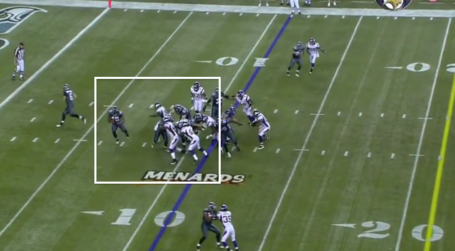 Charlie Whitehurst under center. 3 step drop. Golden Tate is the Z WR. Looks to be Whitehurst's first read. A linebacker collapses in coverage to assist the cornerback, but it's too late. The pass is on the money- designed to be low. Accurate with enough zip, but not the type of power that McNabb was displaying earlier in the game. Golden Tate catches it complete for 10 yards. 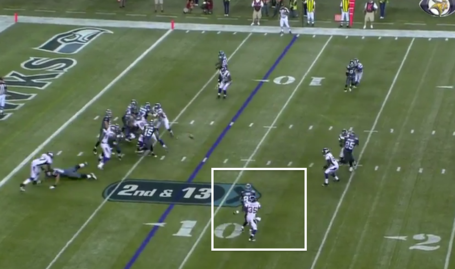 Whitehurst in shotgun. Steps up nicely as the edges of the pocket collapse. It's a good throw and appears again to be his first read. Complete to Durham for 6 yards. First down. Accurate. Velocity is fine. I do believe Durham is his first read, but he has to move in the pocket a bit before he delivers. 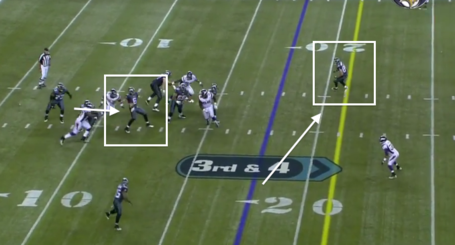 Run up the middle by Clayton for 3 yards.

Now it's an empty backfield. Shotgun. The LB at the LOS does indeed blitz leaving the TE open. Charlie sees the blitz and hits the TE McCoy for 9 yards. Throw is not on the money; it should be on the inside shoulder but he hits the outside shoulder. Decent velocity. Still McCoy hauls it in and its good enough for 9 yards and the first down. Appears to be his first read. 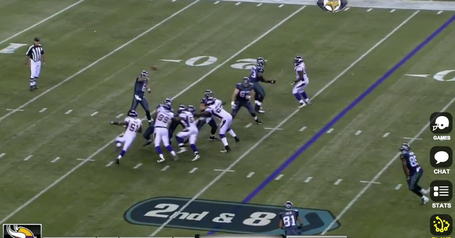 Run up the middle. Defense gets penetration but somehow Clayton spins his way to 2 yards.

Whitehurst under center. It's play action to the RB. First read is to the FB running in the left flat. #43 Dorson Boyce (Husky!) is open and the pass hits him in stride- not too high or too low. Complete for 6. Accurate. Velocity is where you want it for a very short throw.

SNAP 8
3-2. 2 RB, 2 TE, 1 WR. Both TE on the right side. RBs in the I formation. Only WR is in the left slot. Late motion TE #82 Byrd moves from right to left. Everything here is screaming run- from the down and distance to the heavy package and unbalanced look. Defense is crowding up with 9 in the box.

Whitehurst under center. Defense creates a sort of run blitz. Play Action to Clayton. Fullback Boyce fakes like he is hitting the hole then bounces outside right for the pass in the flat. Charlie hits Boyce for 3 yards on the right side. First read. Ball is on the correct shoulder and accurate. Velocity is fine. 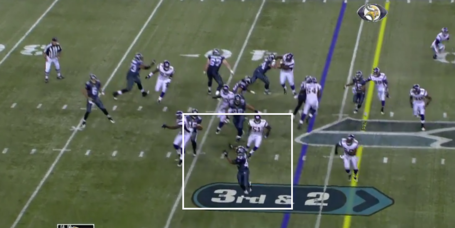 Whitehurst under center. Play-action to the right. Charlie bootlegs left and TE Byrd is wide open. This is his first read. Ball is on the money and has a "Catchable" velocity. Charlie is not trying to gun it in there. These throws are mostly layups so far but at least he is making his layups. Byrd runs for a few yards after the catch for an eventual 14.

Whitehurst is under center. Play-action again. This time its to the left but the backside LB does halt. Whitehurst is rolling right. He reads two possible targets in the middle but decides against it. Defense in a zone that may have collapsed. Charlie moves right and finds his mate- Kris Durham on the right sideline. This is the longest throw of the drive. 14 yards. It is very slightly under-thrown with enough velocity. It is not gunned in there. Good catch by Durham, but it's not a bad throw by any means. It looked slightly less impressive on replay than live. 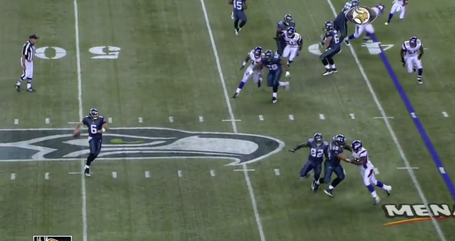 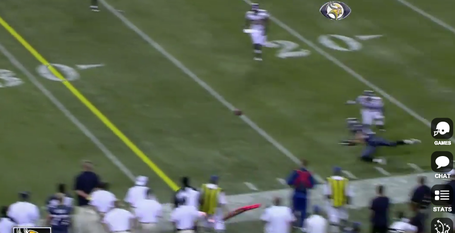 After grinding for 8 snaps to crawl from the 8 yard line to midfield- the offense rips off two semi-chunk plays back to back and now knock on the red zone door. Both plays are for 14 yards, both play action, same personnel package with 2 TE, with one to the left and the second to the right.

Whitehurst under center. Three step drop. Very similar play, probably the same play, as Snap 2. This time it's Pat Williams at the Z instead of Golden Tate. This may be a bad decision. Williams drops it but the ball is slightly behind Williams and the converging linebacker is much closer to pinch the play than in Snap 2. Also, the corner may have gotten his hand on the ball. Almost like a "You can't fool me twice play". Again, this is Charlie's first read and may have been a bad decision: he perhaps should have progressed through the play. Instead, it's an incomplete pass.

TE Anthony McCoy comes back to crash into the DE. Whitehurst under center. It's a toss to the left to RB Thomas Clayton and is good for 6 yards. Best run of the drive. The key block is the LT, I believe it is Will Robinson, who wipes his man off the map.

Shotgun. It is a blitz. Six defenders rush, one on a delay. Protection holds up, but it's one read to the man that was in motion, WR Baldwin running in the right flat. Ball is on the money and correctly thrown on the outside shoulder. Baldwin makes a nice hands catch and gets 11 yards. Velocity is perfect for what it is. 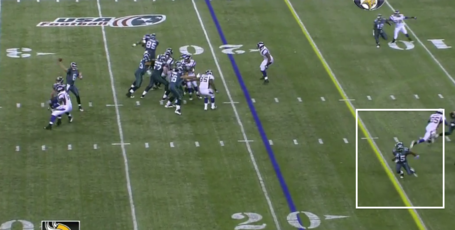 Under Center. Two step drop. Charlie throws behind Doug Baldwin in the slot. It's a form of bubble screen. Charlie does not lead him correctly and it is good for about 2.5 yards. Missed throw, but caught.

SNAP 15
2-G from the 5. 2 RB, 1 TE, 2 WR. RBs are in the I formation. TE is on the left side. The Z WR is actually in the right slot. Base defense. Corners are rolled up on the line of scrimmage as the field is condensed.

Under center. It looks like a run and it is a run to Clayton for 2 yards on the left side.

Shotgun. Snap is low. Charlie looks left while fielding the low ball, almost showing that the play is designed left if the snap was good. He secures the ball and begins to roll left to buy time. He fires a perfect ball in the corner of the end zone to TE Anthony Mccoy. Good velocity. Good placement. Touchdown. 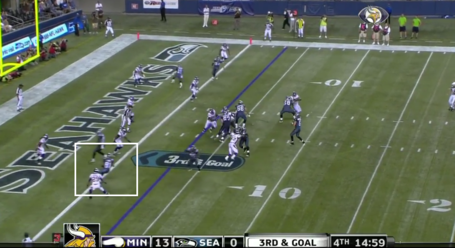 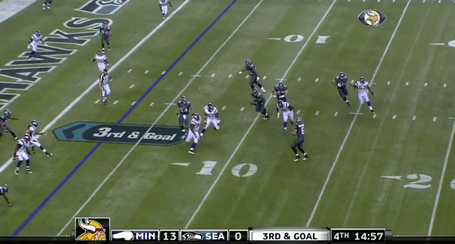 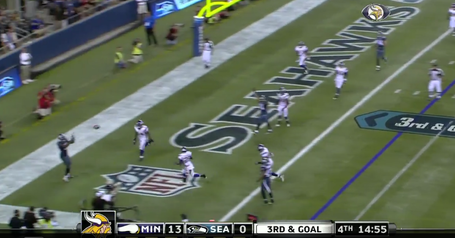 All in all- very few blitzes and very few reads. It was a "simplified" drive in the words of OC Darrell Bevell. Nevertheless, Charlie executed a simplified offense and throw short balls with accuracy. He didn't do anything wrong despite his naysayers. He does look like he is improved since his beginnings with the Seahawks in 2010. I am not saying he is better than Tarvaris, but he moved the ball down the field and took what the defense gave him against a very vanilla defense. That's a good thing.