The Key to the Seahawks Offense: Beating Pressure

Share All sharing options for: The Key to the Seahawks Offense: Beating Pressure

Football savant-in-chief Greg Cosell on the Seahawks, from back in August:

"Look, I gotta tell you, and I'm not defending Tarvaris Jackson, this is a really bad o-line. It is an incredibly slow offense, it's a bad match of quarterback and wide receivers. Mike Williams and Sidney Rice are big bodies that don't separate well, and Jackson is the type of quarterback that's not willing to make tight, contested throws.

So you've got a very bad mix of quarterback and wide receiver, you also have a very bad match of a rookie right side of the o-line, and a quarterback with little pocket command or timing who tends to hold the ball. So this is an offense that has a LOT of issues."

This was never more apparent than during the Seahawks first half of action on Sunday against the 49ers. The offensive line was bad. The offense set up slowly and plays failed to develop. Tarvaris Jackson refused to throw the ball into tight windows, mostly.

People rightly began to panic a little bit. 37 total yards of offense in the opening half. Danny O'Neil put together a piece yesterday talking about how Tom Cable has tried to warn us that things will look ugly to start with. Cable told us, back in the beginning of August:

"I keep saying, if you hear me, the system has to kind of start in infancy and grow just like we all do as humans."

We heard it. Some of us didn't really listen. This offensive line did not hit the ground running. The new names look good on paper but in reality haven't played together enough to be effective. Robert Gallery was out. James Carpenter started at a position he's never played. Breno Giacomini and John Moffitt were starting their first NFL games.

Exacerbating this problem with the offensive line is Tarvaris Jackson's style of play. We've talked about it a little bit here before but Sunday's first half was the rude awakening that Thomas and I have been trying to prepare you for. The first half confirmed what we'd been afraid of -- he tended to hold the ball too long, he refused to pass into tight windows. His pocket presence was poor. He failed to take off running when he probably should have, and took off running when he probably should have stuck in the pocket.

The first half was brutal. I took some notes on all of the 'pressures' that Tarvaris took. Some of them were on the offensive line, but some of them were on Jackson. Almost invariably, he throws jump-passes when faced with pressure. This is disconcerting for me. Here's a look.

Breno Giacomini blows a block through the B gap on Ray McDonald at his inside shoulder, John Moffitt picks up the linebacker coming through the A gap, and McDonald gets through the line easily. Tarvaris Jackson backpedals and throws a jump-pass to Ben Obomanu complete for 7 yards. This was bad protection on the line, but Jackson managed to get the pass off quickly to Obomanu. I wish he wouldn't jump-pass. 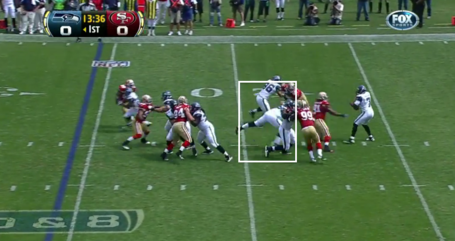 Tarvaris starts in the shotgun, ball is snapped. Justin Smith gets around James Carpenter to his left, Max Unger slides over to help out, and Smith collapses the pocket. Tarvaris Jackson tries to slide through the collapsed pocket but Ray McDonald grabs his jersey and pulls him down for a sack.

Two things, Tarvaris hung on to the ball too long here, and should have taken off running. That's not what Pete Carroll wants though.

"And as far as Tarvaris Jackson getting out of the pocket, scrambling and making plays with his feet, Carroll said he's asked his quarterback to remain patient in the pocket under the constant pressure he's under.

"We've had conversations about that, and we'd like to stay with it as long as he can," Carroll said. "The thing that can work at quarterback is, when you're getting a lot of pressure, your clock can speed up a bit. And we're trying to make sure that doesn't happen as we try and settle it all down here. And he's been poised and done a very nice job. He's really unflappable on the field. I feel like it's a very strong characteristic that we're going to need for awhile here as we're building, and getting these guys strong up front. He gives us a chance to really hang tough in there.""

Regardless, in this case, he probably should have taken off running here instead of trying to step up through the gap, as he had a lot of green in front of him. Announcer John Lynch rides Tarvaris for holding on to the ball too long, but as you can see, Zach Miller and Justin Forsett aren't looking for the ball. It's tough to decide who's to blame on this play. The pocket collapsed quickly but it looks like he could have made a play with his feet.

Seahawks in a two tight end, two receiver set here. Golden Tate goes in motion left prior to the snap and ends up on top of Anthony McCoy and Zach Miller in a diamond formation tight left. McCoy and Miller run into each other 5 yards downfield in what may have been a broken play, but regardless both are completely covered up.

Jackson doesn't see this quick enough, and by the time he looks left to find a wide open Golden Tate in the flats, Justin Smith has spin-moved his way home for a sack. The announcer - John Lynch, again talks about how this one's on Tarvaris, and how he needs to get rid of the football faster. I agree. 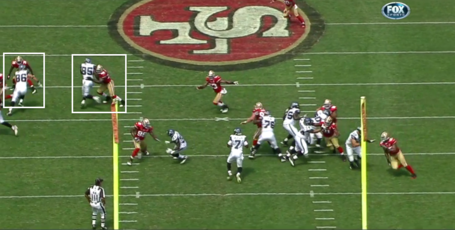 This isn't a pressure so much as it's just a conscious decision not to throw the ball to your receivers. Attached screenshots. 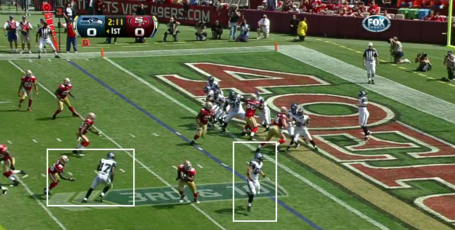 It's a play action fake to Lynch. On the left flank, Mike Williams has screened off Zach Miller's man quite well as he goes to the middle of the field on a comeback route, and as Miller runs an out-route.

Tarvaris pump fakes to Mike Williams, wisely deciding not to throw it to him, but inexplicably doesn't even look at Miller, who is open, being trailed by a linebacker, and has a lot of green in front of him.

Jackson then takes off running to the right and gains 5 yards on a 3rd and 10. Just throw the damn ball. 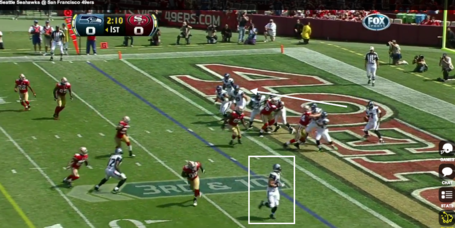 Hawks convert this but I include it because Jackson gets hit as he makes the throw. James Carpenter gets beat by Justin Smith and John Moffitt gets pushed back into the pocket by Ray McDonald.

This one is all on the offensive line and Tarvaris does a good enough job to get the ball to Doug Baldwin on another jump-pass, who makes a diving catch. Stop jump-passing.

This one is on Anthony McCoy (I assume, unless it was a miscommunication). McCoy misses a block, DE Harrelson comes in from the blindside and demolishes Jackson, who fumbles and the ball is recovered by the 49ers. This one is on the offensive line, definitively. 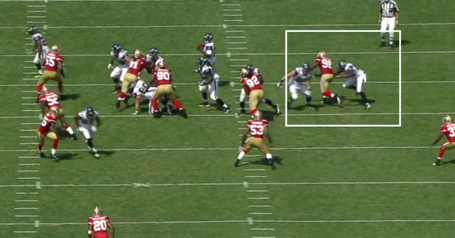 Jackson in the shotgun, ball snapped. Breno Giacomini gets walked back into the pocket with a hand in his face, practically pushing his helmet off. I'm not entirely sure if this is legal? Either way, it collapses the pocket enough.

Jackson steps up through the pocket and throws a jump-pass 15 yards downfield that falls incomplete. The protection on this play is definitely prohibitive, but enough with the jump passes please.

This pressure is on the line - it clearly didn't give Jackson enough time to let the play develop downfield. At least the Seahawks went for the first down.

So that was the first half. The good news? The second half got a LOT better. Why? Several reasons, but I'd say principle among them was that Jackson finally settled in and started to look more comfortable. He faced 3 or 4 real 'pressures' but none of them were as ugly as what we saw in the first half.

He also faced less pressure because he got the ball out quicker. He made some passes into tight windows. You saw him drop back, "one .. two.. three" pass. "One.. two" pass. This is good. I'm not expecting him to never take sacks, but what we saw in the first half cannot be attributed purely to the offensive line. We must understand that Jackson and his line are inextricably linked and their respective strengths and weaknesses play off of each other.

I'm not sure what adjustments were made at the half but once Jackson started making some quick throws and trusting his receivers the offense started moving the ball, ... hell - they opened up by throwing a few deep balls to Ben Obomanu and Golden Tate (overthrew Tate unfortunately, would have been six). Amazing how the run game then started getting some traction (9 defensive men in the box seems to hurt the run game). It was non-existent in the first half because Jackson was simply refusing to throw the ball.

Back to the Cosell quote:

"Mike Williams and Sidney Rice are big bodies that don't separate well, and Jackson is the type of quarterback that's not willing to make tight, contested throws."

This was very, very true in the first half (Rice was out, but Williams wasn't targeted enough, that's for sure). In the second half, Jackson improved. He made some tight throws. He targeted Williams on out-routes a few more times. I'm unsure how Jackson will look this week, but at least he improved on that in the 2nd half.

"So you've got a very bad mix of quarterback and wide receiver, you also have a very bad match of a rookie right side of the o-line, and a quarterback with little pocket command and timing who tends to hold the ball."

Make no mistake, I'm not telling you that this is a good o-line (yet... let me stress YET). What I'm saying is that the way Jackson plays, at times, severely exacerbates the offensive line's problems. In my view, Jackson needs to trust his receivers more, and get the ball out quicker. I'm not saying to force things, but find a happy medium where you take some chances and use your receivers to their strengths.

Bevell could help this by calling more plays that develop faster. Throw it downfield once in a while to keep the defense honest. If you're going to mix in a few slow-developing plays, the good news was that Jackson was actually pretty good on a few screens. He tossed a couple tear drops - first to Marshawn Lynch early in the first quarter (who dropped it) and Justin Forsett later in the game (who picked up 8).

I'm not trying to be morose. I do think this offense will get better as the year goes on. I think the Hawks will game-plan in some things to beat pressure more adequately. The line will take a while (a season? longer?) to really come together but there are some things the Seahawks can do to improve in the short run, and it all starts with Tarvaris Jackson.