Earl Thomas on the Blitz

Share All sharing options for: Earl Thomas on the Blitz

Earl Thomas is one of the Seahawks' best defensive players and is probably one that a lot of Seahawks fans are most excited about. One thing that we've seen with Thomas over the last year is his expanded role and versatility. Beekers is going to talk about ET's (and Kam Chancellor's) deep pass coverage a little later today but for now, I wanted to talk about how the Seahawks are getting Thomas involved in blitzing.

Safeties in this defense need to be good against the run but also very rangy and instinctual defending the pass. Earl has both of those abilities but he's also surprisingly adept at blitzing. He's a sneaky little bastard, this ET.

Thomas has 12 tackles and 2 tackles for a loss in two games this season, and that number should probably be higher. I'm not sure if it's at a higher clip than last year, but he's been finding himself in the backfield pretty often this season, so it's something to keep your eye on. It happened on one notable play against the Steelers on Sunday, where Earl snuck into the backfield through the tackle and guard and stuffed Rashard Mendenhall for no gain on a 4th and goal situation from the one yardline.

That play wasn't a blitz though, just a heads up play by Earl. I wanted to show you an example of how the Seahawks have been getting ET involved in rushing the passer and stopping the run behind the line of scrimmage. 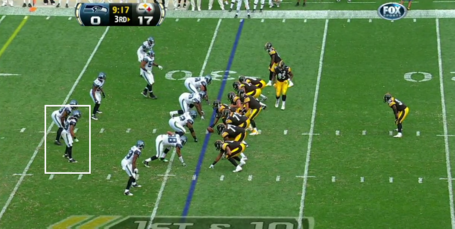 Third quarter, 9:17 on the clock. The Steelers are in 1st and 10 here from their own 29 yard line. You can see the Seahawks in a tight package to counter the Steelers three TE jumbo set.

Earl has creeped in on the weak side next to Aaron Curry and does a good job hiding the blitz. 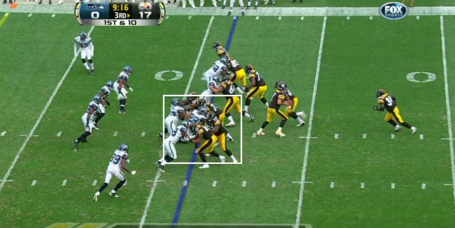 The ball is snapped and ET has timed this thing absolutely perfectly. He sneaks past the guard through the B-gap and I'm pretty sure, after watching it in real-time, that the guy didn't even see him go through there. In the picture above, you can see that Earl is already at the line of scrimmage and Ben Roethlisberger is about to hand off to Mendenhall. 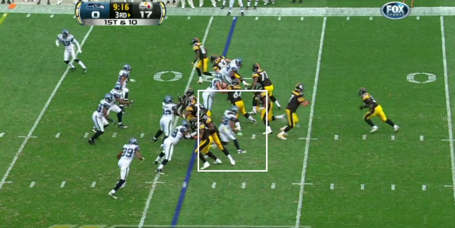 Again, above, you can see that Earl has snuck through the line untouched and is right on top of the play.

Mendenhall has just barely taken the handoff and Thomas hits him. Unfortunately in this case, Earl doesn't do a good enough job of wrapping up so he doesn't get the TFL. He does manage to slow Mendenhall up a lot though, and Clinton McDonald cleans up. 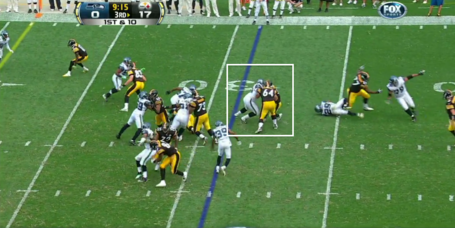 Keep an eye on Earl Thomas in this week's game. With the way the Seahawks play defense, the defensive line isn't going to get a lot of pressure on the quarterback. With that in mind, they'll hopefully dial up some blitzes involving Earl Thomas and possibly Walter Thurmond or another nickelback. These kinds of blitzes are hard to read because ET could come in or drop back at the snap, and Thomas has lightning speed to get through the line.

Good job by newcomer Clint McDonald on this play as well to get some push and clean up the tackle on Mendenhall.