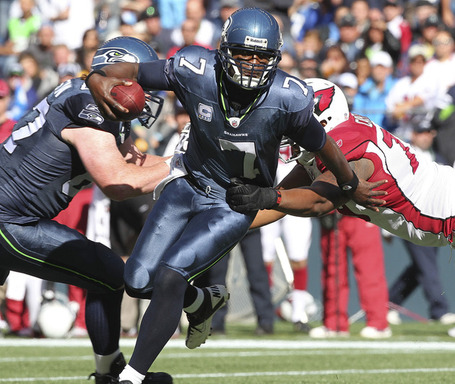 1st thought- I really like the way this defense has looked so far. Obviously it's young and has its flaws, and there is definite room for improvement. But the attitude that Derek talked about, combined the speed and youth of especially the secondary has me pretty excited for the future. Even this season, this defense will often keep the Hawks in games, except for perhaps against elite QBs--but then that's why they're elite. Coming from behind against this young D will be a chore as well.

As I've watched the last few games, a thought has inched itself more and more into my mind. Seattle's front four (and by extension, Gus Bradley and Pete Carroll) have been faulted for their inability to generate pressure on the QB. As most pigskin enthusiasts are aware, I'm sure, a 4-3 defense generally relies on its four down linemen to generate pressure in the pocket, and the linebackers are primarily responsible for run support and dropping into coverage.

They rarely blitz. In a 3-4, on the other hand, the three down lineman are responsible for holding their ground, occupying blockers, and freeing the backers (who are often bigger than 4-3 backers) to make plays. Actually getting to the QB is a bit of a luxury.

After seeing the way PC & JS have approached the construction of the defense, and watching it in action, I'm beginning to think more and more that this defense is more of a variation of a 3-4, rather than a variation of a 4-3. They clearly are still lacking a bit in personnel (Mebane is quite a bit smaller than a traditional 3-4 NT, and Branch and Bryant are a bit bigger and slower than traditional 3-4 DEs), but I still think that that is what they're building. I think this becomes even more apparent when you look at their approach with their linebackers, particularly KJ Wright. No 4-3 team would ever draft and start a 6'4", 250 lb linebacker.

Even the way they use Chris Clemons often reminds me of a 3-4 rush backer. If you pictured the Seahawks defense as a sort of unconventional 3-4 with Bryant-Branch-Mebane as the down linemen, and Wright/Curry-Heater-Hill-Clemons as the backers, then BBM wouldn't be nearly as responsible for generating pressure as they would be for standing up RBs--which they've actually been pretty good at.

2nd thought- In the aforementioned article by Derek, he stated, "Jackson again held the ball way too long on 3 of the 4 sacks, so I really only chalk up one surrendered sack to this line when considering missed assignments or just getting beat." I thought this was interesting, as I had almost the exact opposite phrase run through my mind as I watched the NFL.com highlight video of the game.

Three of the four sacks are shown in that video, though I'm not sure if they are the same three to which Derek was referring. So I went back and watched them again. I'm a bit of a noob when it comes to watching film, and it's 1:52am and I have class at 9, so I'm gonna make these analyses short and sweet.

1) First possession of the game, snap at the 11:10 mark on the game clock (0:12 mark on the video). From the shotgun, Tarvaris takes the snap with a 5 step drop. Using my incredibly accurate thumb and iPhone stopwatch, he is blindsided by Calais Campbell (who humiliated Paul McQ, leaving me to guess that this may be the sack that Derek blamed on McQ) at the 2.4 second mark. I'm pretty sure a QB should reasonably expect more than 2.4 seconds in the pocket, especially with a 5 step drop in the gun.

2) Second quarter, tied at 3, 11:20 on the game clock (01:11 on the video). Under center, 7 step drop, I think. Campbell blows by McQ on his second effort, and hits Tarvaris as he's stepping up (!) into the "pocket" at the 3.0 mark. I'd say 3.0 is starting to get into the "holding the ball too long" territory, but is still far from Joe Flacco "ordering a pizza in the collapsing pocket" territory.

3) Final sack on the video, second quarter, 1:07 mark on the game clock (01:48 on the video). This one is unquestionably (in my opinion) on the line, specifically Lil' Mr. Moffitt. Darnell Dockett made our hairy little booger-eater his afternoon snack. One quick swim move and he blew past Moffitt right into Jackson's face. Jackson saw him coming immediately and started to duck away to his left but it was far too late.

Despite that attempt at evading an inevitable sack, Dockett still actually made contact with him in 2.4 seconds. I cannot imagine how anyone would accuse Tarvaris of holding onto the ball too long in this situation.

This isn't meant at all as a dig at Derek. I loved that article, and I respect his opinion. This was just my take on those three specific situations. Yes, Tarvaris holds the ball too long. Yes, he's a bad quarterback. But I don't think those three sacks can really be pinned on him.

3rd (and final) thought- After an hour spent analyzing the respective schedules of the Colts, Dolphins, Bengals, Vikings, Browns, Broncos, Rams, Niners, and Seahawks, I have all but completely given up hope of the Seahawks drafting in the top 3, and possibly even the top 5. I think that if we're gonna see Luck or Barkley in blue and green next year, it will either be on a team that recently changed its colours, or on a team with several fewer picks in the next two drafts.

The Dolphins (@SD, NYJ, NYG, KC, DAL, BUF, NE, and vs DEN, WAS, BUF, OAK, PHI, and NYJ) have a ridiculously difficult schedule. They will be lucky (don't even think about a pun) to win three of those games, I think.

The Colts' schedule isn't quite as hard, but still is no cakewalk (@TB, NO, CIN, TEN, NE, BAL, JAC, and vs KC, ATL, JAC, CAR, TEN, and HOU). I could easily see them ending up with only three or four wins.

St. Louis has a schedule comparable to ours, but they already have one loss more than Seattle, and they have games like @GB and NO rather than @CHI and NYG. They could very well end up with only four or five wins.

If I'm completely honest with myself (and I'm in the camp hoping for as high of a draft pick as possible), I could reasonably see the Seahawks winning five or six games this year (ARI obviously, then @CLE and vs CIN, WAS, STL, and SF).

I think their offense will improve just because of regression to the mean. I don't think it is honestly only capable of scoring 10 points a game. As the O-line alone improves, the running game will get better, and I think Tarvaris will learn to trust his receivers more, if only marginally. And most of all, the defense will keep them in a lot of the games I mentioned, and will really be able to step on the throats of the Colt McCoy's, Andy Dalton's, and Rex Grossman's of the NFL.

Anyways, these are just what they were advertised to be: random assorted Seahawks thoughts. If you've made it to this point, I commend you.