Chris Myers with the call: "Leon Washington with the carry. He's quick! He's little! 5'8! First down!"

This eloquent mastery of the moment from Myers sort of encapsulates why I like Leon Washington so much. He's lightning quick. He's little, so that sort of makes you root for him in a large persons' league. He's 5'8, that's way shorter than me. He gets first downs! I like those!

Anyway, I chose Leon for my hero this week because I absolutely loved this play. It's an inside zone run, and though it looked to be sniffed out pretty well by the Arizona linebackers initially, Leon used his cunning and guile to get through the line and the backers into the secondary... and if there's anything I love in a Seahawk, it's cunning and guile.

Here's the setup: It's 2nd and 7 from the Seahawks 35 yard line. The Hawks are down a touchdown and driving with 5:36 left in the 2nd Quarter. Here's how it looked: 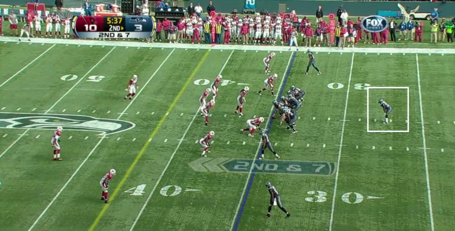 You can see Leon parked about 6 or 7 yards off the line of scrimmage. Plenty of room to build up speed for your 'one-cut-and-go' type of running. Mike Williams is lined up to the left flank and Sidney Rice is to the right. Doug Baldwin is in the slot and I just realized that this is possibly one of my favorite Seahawks' personnel groupings.

You can see Washington take the handoff and Max Unger has done a good job against the Cardinals nose tackle to get good leverage. John Moffitt looks to be doubling up on the NT but then at the last second he'll veer and occupy the middle linebacker, Paris Lenon (sick ass name, by the way), JUST enough for Leon to squirt by.

James Carpenter looks like he's going to try and take the MLB here but he's going to veer at the last second and seal off the strong side linebacker. Quite well, I'll add.

No sooner can you say "Blue Thunder" and he's planted his foot and made his cut down field. The hole opens up just enough for him to run through and although it doesn't really matter much in terms of Leon getting through the line, props to Doug Baldwin for laying a pretty good block on the nickel back there on the top left of your screen. This allows Washington to get more yards once he's past the linebackers.

You can see that Moffitt has held up the MLB Lenon just enough that an arm tackle of Washington proves futile. (Also, Moffitt got away with a bit of a facemask.. but who's keeping track?). Once Leon gets past Lenon, he's got some green in front of him.

Before it's all said and done, Washington has picked up 21 yards in a matter of a few seconds. This type of boom-boom play -- one cut and you're down the field in a flash -- is a great example of what Pete Carroll and Tom Cable are trying to bring to Seattle. This isn't a Marshawn Lynch type of run. He's more of a bruising, "Thunder-in-the-metaphor" type of guy. Get a few yards here and there kind of guy but then when you mix in a guy like Washington, your "lightning-in-the-metaphor" type of runner and stuff like this happens. Grind it out, grind it out, and crack! - you're up the field at the speed of light. I really like using the thunder and lighting motif in this story.

On the year, Leon is averaging 6.8 yards per carry. Well, that's on 4 carries. But that's my point. For the love of Clipboard Christ, get him the football more.