After last week's game and Mike Wallace torching Brandon Browner, Pete Carroll made some remarks that were interpreted (by rotoworld, amongst others) to mean that Browner would be "matched up" - as in follow - Larry Fitzgerald. Immediate lightheadedness ensued. Oh my! You mean we'll actually have our corners match up to their ideal guys rather than just line up left and right each snap? A dream come true!

But nope, it was not to be. Don't get me wrong, Larry Fitzgerald was usually matched up with Brandon Browner, but it was not because Browner was tracking Fitzgerald, it was because because Fitzgerald usually lines up on the offensive left as the split end, and Browner is our defensive right cornerback.

Who cares, right? Well, I'm making note of this specifically because I've seen a lot of praise heaped on Browner for his performance against Fitzgerald, particularly shutting him down in the second half. I don't want to negate that praise, I agree with it mostly, he did look good matching up against a bigger guy, but it's missing two important facts:

1) Compared to the Steelers game (as noted here), the deep and double coverage schemes were much better. Pretty much any shot we got of Fitzgerald deep saw him in double coverage, which isn't surprising, but it's what you'd hope to see, and Browner not being hung out to dry on his own is a big factor in the improvement.

2) While Fitzgerald usually lines up at the split end left, during key drives where the Cardinals were pushing downfield and in hurry up mode, Fitzgerald would line up on the offensive right side of the field over half the time. There's four drives where this is the case: the third drive ending in the Fitzgerald TD, the final Cardinals drive of the 1st half ending in a Marcus Trufant interception, and the final two drives of the second half (for instance, Trufant was on Fitzgerald on the Chancellor interception).

I'm partially noting this just to get the facts straight, but mostly because it is worth noting that the improved play against Fitzgerald was due to improved play by numerous defensive players, not just Browner. Hell, a lot of our gameplan seemed to have changed: we were in nickel much more than against the Steelers, and Trufant used a cushion since he's good at that while Browner would press almost all the time. It was particularly great to see Browner and Fitzgerald go at it on running plays, with Fitzgerald aggressively blocking Browner. I know it's a sin to say since he's a Cardinal, but dammit Fitzgerald is awesome. Hell, that awesome was on display on the TD pass, which I considered one of the least interesting plays to analyze since it's just one of those "what do you do about it, it's Larry Fitzgerald" type plays.

I want to note a few other plays against Fitzgerald. 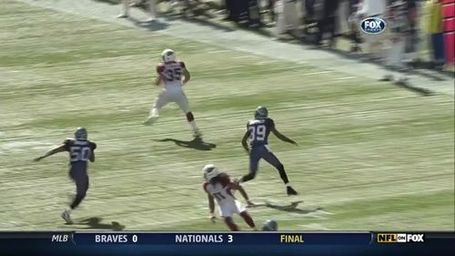 Here we have K.J. Wright and Brandon Browner both on the under on Larry Fitzgerald, with Earl Thomas over. Think you got enough guys on him? Kolb took the wide open Anthony Sherman (#35) for an easy pass on this play. 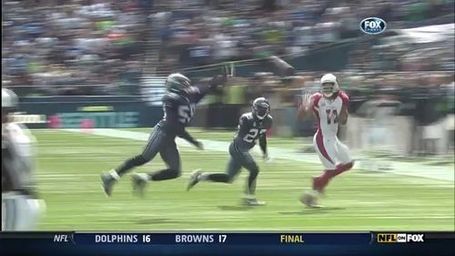 Here's one where it went wrong. Curry was in for one drive (and only for that drive, he did not play a snap otherwise), which would end up with a Fitzgerald touchdown. As mentioned, Fitzgerald would line up right more often than not on such drives. Trufant has a cushion here, and the over. Curry has the under, but loses track of the receiver and is easily beat for a first down. 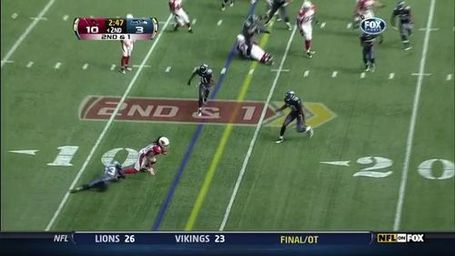 Prior to the snap, Trufant is about four or five yards off the line. He reads screen, and is running up before Kolb even looks to make the pass, ankle-tackling Fitzgerald behind the line of scrimmage. This is veteran savvy. 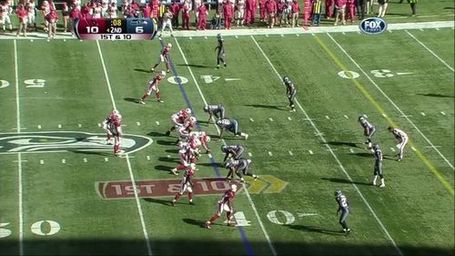 Speaking of veteran savvy, here the Seahawks are in nickel (as we usually were doing to hurry-up drives), Cardinals in four wide, defense in zone... 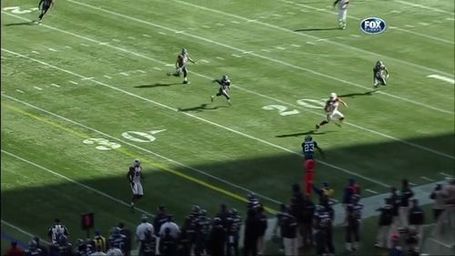 ... Fitzgerald is running a deep out. Earl Thomas is over him, but notice Trufant's positioning. This is kind of a poor throw by Kolb, but Trufant is positioning himself really well to cut into the route, which he does. Intercepted. 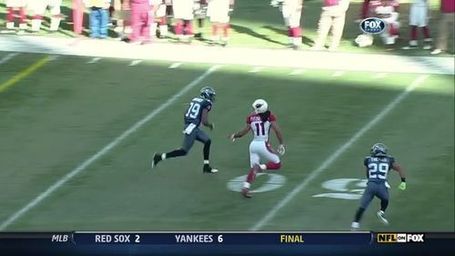 This is the most basic look that I can only assume we being utilized most of the time with Browner on Fitzgerald: him in the under, Earl Thomas (or Kam Chancellor) over. It works perfectly. Kolb stared at the matchup for a while, then ran it for six (short of the first).

So. In a nutshell. While I was happy to see Browner perform better, this one was at least as much about other players, particularly improved play by our two young safeties and the outstanding game Chris Clemons had.

To look forward a bit... If we're still going LCB/RCB with constant safety help for Roddy White this week, the Falcons have more options to shred us, unlike the Cardinals. But the Falcons are a team that needs to establish the run as Matt Ryan does not do well as a high-volume passer, and they have been struggling with protection. The former plays well to our strength, the latter well might if Chris Clemons keeps up his high level of performance.