I really miss Brian McIntyre's personnel reviews, where he would track offensive and defense formations and snap-counts for individual players. An invaluable tool, especially in certain cases. Like now, with 4th-round rookie K.J. Wright coming in to replace incumbent starter Aaron Curry. I won't have exact snap counts for you in his stead, but I did go back to take a closer look at the usage of our linebackers. Some key observations:

How did K.J. Wright do? Well, first I'd like to point out one play that a lot of people seemingly missed... 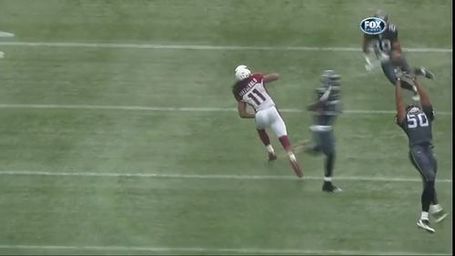 K.J. Wright tipped the pass that Earl Thomas intercepted. This was primarily how K.J. Wright was used, he'd play a little contain or watching gaps, but often he'd drop back into under coverage, to use his tall frame and long arms to bat away passes when possible. Even when right on the line of scrimmage, Wright would usually drop back and cover the flats. The play above would have been quite memorable for the rookie had it not been called back, but it's hard to say otherwise how well he did in this role. 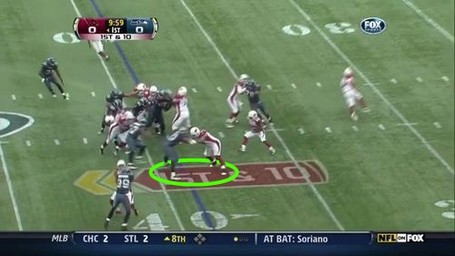 The problem with Wright's play lay mostly in his other tasks. It was a fresh reminder of how outstanding Aaron Curry's athleticism is. When asked to seal a gap or when chasing for a tackle, Wright looked much slower and weaker than Curry usually does. In the still above he engaged his blocker headon and was prevented from even getting a hand on the runner. This was the story of the game in runs and short passes. Wright would arrive late to uselessly jump on top of the pile or would run straight at and engage a blocker to then be walked out of the play.

Aaron Curry tallied more plays in his one drive than Wright did all game, beating his blocker to get a good tackle on a run over the middle, and getting good pressure on Kevin Kolb on the touchdown pass to Larry Fitzgerald. Of course, he mixed it up with a boneheaded mistake where he had under coverage on Fitzgerald and just completely lost him. The usual, for Curry. Curry's upside is still miles beyond that of Wright, but as a third-year player upside has become less relevant in evaluating him.

I'm not seeing an immediate upgrade in Wright but that's hardly surprising for a rookie fourth round pick. He reportedly has much better instincts, but they did not show up in this game. On the other hand, that kind of stuff can be hard to scout out in just one game, and we could see much more evidence of his instincts in future games. That said, I don't think he did anything to absolutely solidify his starting spot, and would hope Curry has a fair shot at regaining it this week, presuming he's not traded away. Of course, Curry has a lot of ground to make up following his bad performance against Pittsburgh.