Thoughts on the Seahawks' Ever-Evolving Defense

Share All sharing options for: Thoughts on the Seahawks' Ever-Evolving Defense

One of the things I love the most about the NFL is the complexity and intricacies of scheme and strategy. It's a constant chess match between teams, coordinators, and players. The Seahawks, rightly so, are pretty vague when talking about their schemes and one example of this lately has been the Aaron Curry/K.J. Wright demotion/promotion and subsequent press conferences and interviews. In most of those interviews, you hear Gus Bradley or Pete Carroll refer to Curry and Wright's position as the "strongside linebacker" or the "Sam" but in reality those players are more often playing the weakside spot.

When you hear Curry or Wright talk about it they generally use the vague term "outside linebacker" which is accurate, considering they have been playing a little bit of both, though from the eye test, it seems that Leroy Hill is the 'base' strongside linebacker and Curry/Wright are the weakside starters.

Thomas talked about that here while doing some player-charting, but the bottom line is that over the first few games, the Seahawks defense has been pretty variable and has looked different this year than it did last year. One thing of note is that they've starting using an "over" front more often, replacing the "under" front they used predominantly in 2010. This means you see our front four lined up heads up or to the strongside of the offense, switching the position of the '3-tech' and 'nose-tackle' and the three linebackers are dropped back to play more in space.

This scheme change has meant that Curry has been asked to run and drop back into pass coverage more and set the edge in run support on the strongside less. Curry's strength is on the latter - he's a beast at breaking off blocks and matching up against tight ends but has trouble with his feel and instincts in zone pass coverage. K.J. Wright's main strengths are just that -- he was heralded for his instincts and length in zone coverage coming out and that's most likely why we're seeing him get more snaps in the Seahawks changing defense. He's not the athlete that Curry is, but he has a feel for the game and is adequate in run support.

Per the Seahawks' press conference on Wednesday, Pete Carroll noted about Aaron Curry, "He's really stout at the line of scrimmage, he's really good on the tight end. He's a brute of a guy when we play him on blockers, at getting off of blockers. And that's the stuff that he's been the best at. He's big and fast and he hits you. He's got all that. He's got a lot of talents.

We've moved him a round a little bit. If you've noticed, we're not on the line of scrimmage as much as we've been in the past (with the Sam linebacker), and that doesn't give him the opportunity to do some of those special things. But he understands the scheme and knows what's going on and he's going to battle his way back."

This fundamental change in scheme is subtle to the naked eye but major when it comes to assignments and the Hawks presumably had hoped Curry would rise to the challenge in the new role. It appears that he hasn't impressed thus far, but the season is far from over. The Hawks are still touting this as an open competition so we'll see if Curry can win back some snaps.

Thomas noted that, last Sunday, the Seahawks "defense shift(ed) into over looks at times, which ...changes the Sam's responsibilities, but I'll note our base look is still 4-3 Under.

The shift can be most easily recognized by where Brandon Mebane lines up: normally the nose tackle lines up on the strongside A-Gap in Under and weakside A-Gap in Over."

Here is a look at the two base defenses, (pictures per the excellent Jene Bremel): 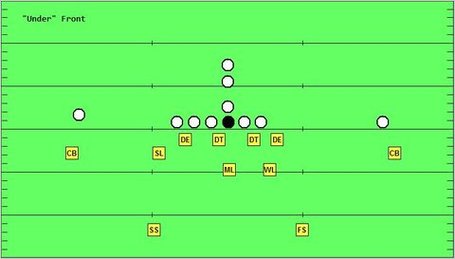 Above you see the base "under" front, characterized by a shift to the weakside of the offense. In this look, you'd see Red Bryant as the LDE, Brandon Mebane as the NT on the strongside, Alan Branch at the 3-tech on the weakside, and Chris Clemons on the weakside as the RDE. 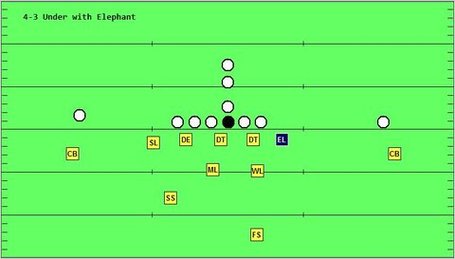 Above you see the 4-3 Under with Elephant, which is the variation of the 4-3 under that the Seahawks used a lot of last season, and still use some this year. You can see that the Sam linebacker (SL) - sometimes Curry, sometimes Hill, is up on the line on the strongside as a containment player against the tight end and the D-gap, and the elephant, (EL) Chris Clemons, is angled off a bit and can either be a stand-up end or rush from that side in a three point stance in the weakside C-gap. 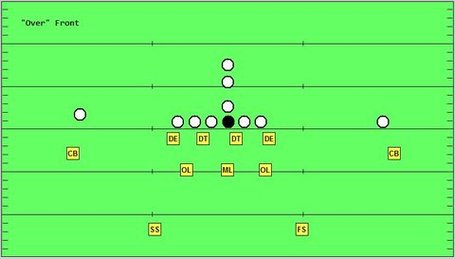 What you're seeing the Hawks employ at times this year is above, known as a 4-3 Over front. You'll see the nose tackle on the weak side, lined up in the A-gap between center and guard. The linebackers are backed up off the line and are designated here, aptly, as "OL" or "outside linebackers". The weakside/strongside designation is less key here as the front is a little more balanced and more variable. This is possibly part of the reason the Hawks are vague when talking about Sam vs Will when it comes to Aaron Curry and KJ Wright vs Leroy Hill.

Pete Carroll explained, "It's more of a scheme issue for us, just trying to put everyone in the right spot. We do both, we still do both, but a little more emphasis this year on our guys being backed off the ball."

Thomas continued, "To make a historical comparison: the Bucs classified Derrick Brooks as the Will linebacker, but he would often play behind Warren Sapp (on the Seahawks, 3-tech Alan Branch) to protect the gaps so the 3-tech could just shoot forward. When in under, that means Brooks is on the weakside, but when in over (and their Tampa-2 shifted to over a lot more than people believe), that makes Brooks the strongside linebacker. Similar confusion on designations is bound to follow shifting fronts with the Seahawks."

Regardless, the most visible difference in the Seahawks' defense this year is the placement and usage of their linebackers. You see more emphasis placed on playing in space and running in zone pass coverage than last year but the question remains as to whether this is a wholesale scheme change or just game-planning to counter the specific offenses the Seahawks have faced thus far.

I'll follow up on this with some screen caps of different packages the Seahawks are running so far and offer some thoughts. I think it's pretty early to draw any conclusions from these changes but the fact changes were made isn't super surprising considering the influx of new coaches and players -- Todd Wash as the new defensive line coach, the move that Brandon Mebane has made to NT, and the addition of Alan Branch, to name a few. It will be interesting to follow as the season goes on.