Pre-snap motions are pretty prevalent in NFL offenses these days, and Darrell Bevell's offense is no exception. Just off the top of my head while watching the Seahawks ' preseason games, it seems like the Hawks use a pre-snap motion on nearly every play, and sometimes several players motion before the ball is snapped.

It's not just wide receivers and tight ends though, the Hawks will regularly motion their running backs and fullbacks out of the backfield and onto the wing (or visa versa). Now, obviously, this isn't novel or unique to Bevell's offense, but I wanted to bring up the concept and highlight a situation where it was used well in the Seahawks matchup against the Vikings in PSW2.

But first as a refresher, why send a player in motion?

Coordinators like to put their tight ends, fullbacks, running backs, and wide receivers in motion because of a few reasons: first, it draws reactions from the defense and can mask the offensive formation or strategy you're going for. When a player goes in motion you can often see the defense reacting and communicating responsibilities to each other.

Second, depending on the defensive reaction, a quarterback can better discern whether it's a zone or man defense. If a corner follows a receiver all across the field you generally know he's in man coverage.

Past that, it can be used to create mismatches to your benefit. You can do this by motioning a running back to the wing to be matched up against a linebacker. You can put the tight end out in the slot against a much smaller safety. These types of things. You can potentially catch the defense in a vulnerable situation while motioning. As I said, splitting the TE out or motioning the FB out to the wing seems minor but changes a lot for the defensive call, and the idea is to see this and capitalize on it.

You can use it to break tendencies as well -- if you have a bread and butter play but want to disguise the look pre-snap you can come out in a different look but motion in to what you need.

Most importantly though, it causes the defense to think. This is big if you're facing an aggressive defense because when they're thinking they're not attacking. As Scott put it when I was chatting with him about it, "cluttered mind = slow reaction"

Anyway, I thought of it while re-watching the Hawks - Vikings game when the Hawks used a simple pre-snap motion to set up a first down catch from Charlie Whitehurst to Doug Baldwin.

You've got Charlie in the shotgun with Patrick Williams out left, Kris Durham in the slot (interesting, btw), and Doug Baldwin out on the right flank. You can see the Vikings are in press coverage with a single high free safety cover-1. They ran this quite a bit (and incidentally it's something the Hawks do a lot of too on defense).

You'll see Dougie Fresh go into motion left here in the next frame. 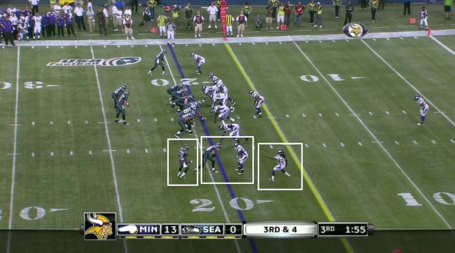 Baldwin motions left and stops in a stack formation with Durham in front of him. You can see the Vikings corner Cord Parks (hey, remember him!?) calling out responsibilities and now has backed off the line by a few yards. He's in man here so if Baldwin had kept going I'd assume he just would have followed him or passed him off to the safety on Durham. This formation and motion works well versus man coverage because the corner now has to account for Baldwin running to the inside and thus has to back off quite a ways.

You can see Durham beat the jam here and the nickleback on him is playing inside contain. Baldwin uses Durham well here and doesn't give up his route until the absolute last second. 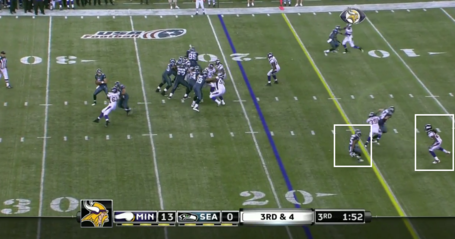 Now Baldwin has committed his route (a sideline out route) but the corner is almost five yards off him because of the stack formation. 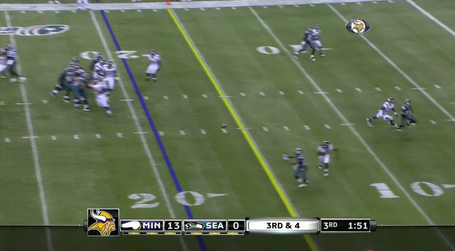 Makes for easy separation, something that would have been tougher if he'd been jammed at the line. In this case, the simple motion in has worked like a charm. Go Hawks.