Let's jump right in and get this first one over with. I'm not sure there's another game I'd rather see less than this one. Eww Niners.

Who, you might wonder, began this veritable spree of unruliness? Why the young Master Anthony McCoy, indeed. Yes, Mr. McCoy, you can't do this. 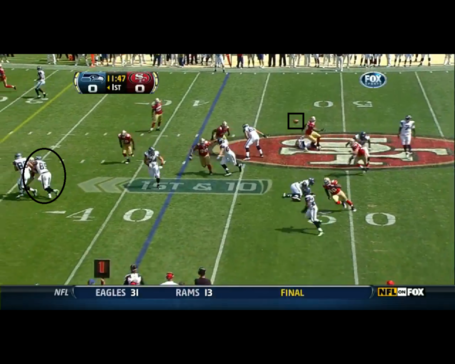 The NFL rulebook states, "Actions that constitute offensive pass interference include but are not limited to: (a) Blocking downfield by an offensive player prior to the ball being touched. (b) Initiating contact with a defender by shoving or pushing off thus creating a separation in an attempt to catch a pass. (c) Driving through a defender who has established a position on the field."

At first I thought to attribute this to a young kid getting excited about the first game of the season, but there's Zach Miller out there too, gettin' down and dirty too early.

Pretty simple here. Seattle is lined up in I-formation with Michael Robinson and Leon Washington in the backfield. Mike Williams is split out wide right, and Golden Tate and Zach Miller are out wide left. Miller motions in just before the snap, Brooks jumps offsides, and Unger snaps the ball. It's a designed run off left tackle, with Carlson blocking out Aldon Smith and Russell Okung tasked with eliminating Justin Smith. MikeRob lead blocks and chips at Aldon as he runs by. Leon speeds thru the gap created between Russell and Carlson and passes Robinson. If Mike had headed straight through the gap and hit the waiting Donte Whitner, who knows how this might have broken out.

But in the end, it doesn't matter, because as Russell steamrolls Justin Smith, he has two big handfuls of that spiteful red jersey. He keeps his hands between the pads and just runs Smith backwards, but as the big Niner begins to surrender ground as Washington whisks by, the sudden lack of resistance throws Big Russ off his groove and he stumbles forward/is thrown down and doesn't let go of the jersey before the grab is obvious. And of course, Smith throws a little tantrum to satisfy his inner diva.

Most of this happens off-screen, but it looks like Malcolm Smith just held on to Blake Costanzo as Costanzo ran him over, pulling him down on top of him. Perhaps I'm just biased and only notice this when teams I can't stand do it, but how ridiculous and immature does it look when a guy comes up wildly and incessantly aping the flag toss motion? Costanzo starts doing it before the play is even over, and he seriously walks at least five or six steps as he continues the petulant little motion. That's seriously a long time. Like, really, we get your point. You think you were held. Good grief, move on already. Ok, I'm getting sidetracked. This team is just so easy to hate!

Oh lookee here! We have our first BS penalty of the year, only less than 17 minutes into the first game. First, a quick trip back to the rulebook: "No player of offensive team may charge or move abruptly, after assuming set position, in such manner as to lead defense to believe snap has started. No player of the defensive team within one yard of the line of scrimmage may make an abrupt movement in an attempt to cause the offense to false start."

Aldon Smith is in the four-point sprinter's stance on the offensive left. Tarvaris barks out a couple calls, then waves to the offensive right to call Ben Obomanu into motion, and Smith jumps forward. He doesn't cross the line of scrimmage, but he lurches forward very noticeably, and Russell reacts directly to that action. This should not have been a false start, and there should never have even been a question.

Ahh yes, the now-infamous San Francisco Shift. Obviously 4th-and-1, nigh unto the red zone. Adam Snyder, a backup OL, reports in as eligible, and lines up right off of the right tackle. The entire offense comes set as Smith goes under center, and barks a loud "Hut hut!" Just as he does, Snyder steps back from the line, and as soon as Seahawks start pouring over the line, he motions out toward Vernon Davis to really sell the "shift."

The intent was obviously, clearly, definitely designed to draw the Seahawks offsides, and it works. It's typical Harbaugh tomfoolery, but whatever, it's legal in the most technical sense--that is, as long as it's clear to the official that they are not trying to simulate the snap. Psccchh, seems to me that stepping back right when the QB starts a hard count is about as close to "simulating the snap" as you can get.

A bit of research revealed that the Niners pulled this same crock against the Redskins, Giants, and Jets. Against the two New York teams, the defense was penalized. Against Washington, however, they tried it with a tight end, and jumped something fierce and sold it a little too well, and it was called a false start.

So there's BS penalty number two, and we're not even to halftime yet! Oh boy! :)

Just a blatant bit of encroachment. Bad Anthony. Don't suck at football, because I like your personality.

Browner mauls Edwards. It happened a lot in this game, sometimes more legal than others. This time was one of the "others."

This is the hail mary at the end of the half. Okung certainly holds Justin Smith as he beats him around the edge, though I've seen much worse not called. Still, a hold, and a legitimate one.

This was a bizarre and ugly play. Anthony McCoy is lined up inline off left tackle, and Miller is flanking him. Tarvaris calls for a shift and they both stand and shift back into a sort of H-back, wishbone type of a position, off to the QB's right--yes, both of them, standing right next to each other like good little boys. This would have been ok, if odd, but Tarvaris calls for the snap before they reset.

On the plus side, Justin Smith was a bonehead and jumped across the line when he saw people start running around, so this ended up not mattering in the long run, beyond the looking stupid and bad at football part.

Pretty tough to tell what's going on here, but I think I can see McCoy at the beginning of the play, just before the flag is thrown, and he definitely isn't blocking anyone in the back. He generates some decent pressure up the middle, gets good leverage and pops his man back a few steps, then sorta spins around him and awkwardly turns and hustles up the field. Perhaps the flag was thrown for someone else and his number was mistakenly called.

Forsett is nowhere to be seen, so he must be on the outside blocking one of the gunners. He never makes his way onto the broadcast.

Jeff Triplette calls this penalty on #21, who doesn't exist. The boxscore blames Atari Bigby, who does exist, and who did pointlessly shove a guy in the back. He boinks Bruce Miller right in the back and sends him sprawling forward right into the legs of Washington, almost tackling him on the spot. Maybe that would have been better, so we wouldn't be all let down and pissed off when a 73 yard run has to get called back.

This here, this is an interesting play. They went with an unbalanced line, essentially pulling Okung out and sticking him in between John Moffitt and Breno Giacomini (the RG and RT). James Carpenter started at LG in this game because Gallery was injured. So the line looked like this: A. McCoy - Carpenter - Unger - Moffitt - Okung - Giacomini. All well and good, and worked out decently--except apparently Giacomini didn't report as eligible, since he was now lined up in an eligible slot.

I found it interesting that they pulled Okung over and ran behind him. Coupled with the numbers Danny compiled the other day, I think they really trust Okung as a run-blocker.

Don't horse-collar tackle, Leroy. It's not allowed. Oh, and while you're at it--be better. Or younger. Or both.

This was the bogus-ish roughing penalty called on Browner to wrap up his rather ugly introduction to the NFL. As the broadcast mentioned, it was a pretty nifty acting job by Akers, as Browner never even touched him. The official who called the penalty had a front row seat to it and actually had probably the best angle to see that Browner never made contact with Akers' leg. But, good on him for sticking to the absolute letter of the law and not budging even when sense might dictate so.

This was a pretty big deal, as it took the Niners from fourth down and settling for a field goal to first and goal. But, the 49ers had the most inept red zone offense in years, so they just fooled around, gave us this, and contributed again to Akers' ignominious record.

This is the game-clinching punt return TD. Who cares. Illegal substitution, whatever. The broadcast was too busy fawning all over Justin Smith, and cut to the punt just before the snap, so I have no idea if it was a twelve men in the huddle thing, or what. But, this stood out to me: 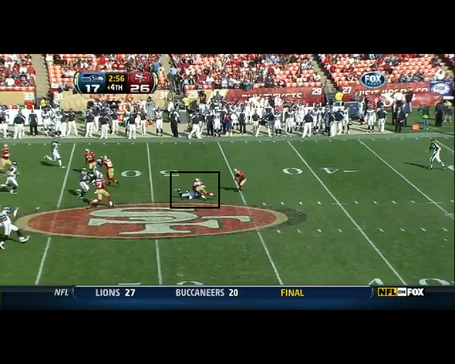 Yeah, that's the Seahawks' gunner, Richard Sherman. He's getting held, dragged, pulled, thrown down and sat on top of. Good blocking, that.

Anyways, by this point I'm sick and bloody tired of this game and that ratty old nasty stadium. I'm honestly looking forward to the next game, and that's really saying something.

In the next installment of the series, I'll include a running tally of cumulative total penalties, penalties accepted, players penalized, total penalty yards, and all that sort of good stuff.