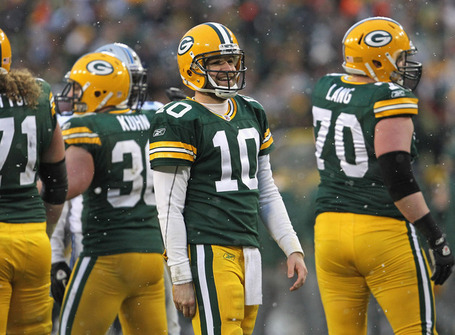 If you saw the game, this GB-DET matchup, saw the highlights, or heard the news that put Flynn's name in the QB prospect discussion for needy teams from, "Don't forget Matt Flynn," to, "If you're picking 3rd or lower, maybe you should first look at Matt Flynn" -- if you know about the game, you know it got markedly better.

By this point, we've pulled some positives out, but acknowledged unimpressive play despite the points & production. The positives seem applicable as factors in a successful career. The unimpressive play doesn't yet hold the same potential for long-term implications, it seems to me. It comes in large part from the obvious strength of all the pieces around him, and no discernible impact above "starting replacement level" (below average but somehow starting) quarterback play.

But on the other hand I think it's more difficult for me to identify harbingers of doom in QB play than it is to find harbingers of CandyMountainness. That holds form with Flynn, largely because we're not seeing him respond, adapt or transcend more formidable circumstances. We can see he's achieving as much production, in this single game here, as you could ever ask for, and we can temper that by pointing out the situation he's in is absolutely optimal, but we don't know how he deals with real, unrelenting pressure, because we didn't get to see it.

We don't know how he's able to balance gunslinging and prudence, whether confidence is a requisite component to his success, which could be completely undermined by some game-deciding mistakes, whether defensive tactical responses to his tendencies will be insurmountable.

That's the Dark Matter of the NFL. We've got a cosmic microwave background that indicates there is Dark Matter, but we don't have the mechanism to find & observe the WIMPs.

It's important for me to call this out, here, or you & I could get carried away in our excitement. The remainder of the game was pretty impressive.

Outlook on Flynn?
I like how Matt Flynn performed in an optimal situation. About a half-quarter in, and it became almost mundanely redundant to see chunks of yardage eaten up and TDs plucked like late season low-hanging fruit. He played the part well and he did little wrong once the interception brought the head check.

So he tore the Lions apart because the Packers, without Rodgers, without Greg Jennings, with Chad Clifton only in for a quarter & a half to see if he's physically ready to return for the playoffs, is still just that good. When Clifton went out they shifted the starters, brought in Evan Dietrich-Smith, and didn't miss a beat. It wasn't until later that the Lions somehow began to pressure better (but not nearly enough).

So we know all that, it's been well established. We can't speak to the dark matter except to point out that it exists. The translatability here is, he can perform well when given the tools. He's got the decision-making capability to respond to protection issues, or lesser weapons in better coverage.

Two common comparisons, while easy comparisons, truly seem to be the best comparisons. And yes, they are also Matts. And they make for good sign posts on the floor-to-ceiling continuum of Flynn's prospects.

Cassel, like Flynn, was not a starter in college, and was not a highly graded prospect. A competitive QB with the mental makeup, some accuracy, but only barely meeting the physical requisites of the NFL, Cassel appeared to have bloomed late in substitution on a great offense, was made a starter, and despite the Chiefs' 2010 playoff appearance, has struggled to be effective, largely on account of harmful mistakes. It's apparent he was not prepared for difficulties the Chiefs offense presented, coming from that optimal situation.

Replace "Cassel" with "Hasselbeck" in that paragraph, except he was a college starter, the blooming occurred in preseason, and the Packer offense then was good but not great.

To me Cassel is playing as though Jon Kitna's pinnacle is now his ceiling. Kitna took a long time to become an effective downfield passer, who was undone by his inability to solve his major ball control and pressure awareness issues. Calling that Flynn's floor, then, would be generous. Cassel, currently, is a decent descriptor of a floor. It all depends on how quality an offense he'd be inserted into.

Hasselbeck as a ceiling, how attainable is that? Well my main takeaway from this study is the difference the receivers make, and how an average tools guy with a decent but untested head on his shoulders can shred a professional defense. In limited action I'd go so far as to say with a great offense, Flynn has surpassed a Hasselbeck ceiling. With that kind of offense I think Tarvaris Jackson would attain a Hasselbeck ceiling. I think Matt Cassel did for a year. With just a decent offense, I believe Flynn would still at least approach a Hasselbeck ceiling, but I'm not confident in that assessment. Just too little information.

Fit for Seattle?
As far as we can tell, Seattle wants a mobile and strong-armed QB who's capable but prudent, to place inside a run-oriented offense. Flynn is mobile but not the kind of mobile a mobile-seeking team looks for. His arm strength is totally Hasselbeckian, a deal-breaker almost no where, but along the range of valuation of arm strength, I believe Seattle lies somewhere in the middle of the "more-valued" pack.

So he doesn't quite fit the bill. Still, I don't believe he's outside their range, he's demonstrated capability of what they want, and I believe the fringe benefit of not costing draft capital is of more value to them than to some of us fans. It would be a significant surprise if they didn't pursue him to some extent. I don't know what kind of contract they'd be comfortable with, or their interest in outbidding other determined suitors. But they'll at least make a play for him I'm sure.

Flynn is an upgrade to the position, no doubt. Which would also factor as a significant upgrade to the entire team. We have the makings of a very good team, and the offense could be very good, but he's sure to face more pressure and have lesser receiving options on a consistent basis in Seattle, and that is thoroughly untested.

That kind of makes him like an older rookie in the mold of Matt Leinart or Jimmie Clausen, aggressive, average tools guys who can tear a defense apart on a superior offense, highly-graded performance & talent-wise. Were you hoping for better comps? I'd toss out the attitude & commitment questions of those two, which may not be entirely how & why they failed, but certainly factored. I think they're good comps because Flynn still could fail in so many ways, and those two with different mental makeups could still have found professional success the way that Flynn's Detroit game here suggests he's capable of.

He's not the prospect that Robert Griffin III is. He's less risky, but not by much. Doesn't have the same ceiling or potential that Griffin does. He's ready now, and so is this team that they built. He's less costly, and Carroll apparently recognizes that great QBs yet nonetheless rise or fall as the talent of their offense does. I haven't studied anyone in the draft but I'm convinced that Flynn and a 1st round pick are a better option than a 1st round QB, which may well cost more than just a single 1st.

But that's just me, liking another less-risky, lower-ceiling QB prospect. I'm starting to recognize I'm a sucker for these guys.