I know I said I'd do three parts, but this one was getting to long. I moved a part of this game and the 1000-word conclusion to the next post, which will be published later today.

We've come to the Lions game. 31-44 for 480 yards, 6-1 TD-INT. Pretty amazing numbers from Flynn. Unlike the Patriots, the Lions did not blitz a lot, instead depending primarily on front four pressure. This isn't surprising, since the Lions front four is probably the most talented and well-coached/schemed front four in the NFL. Yet the situation when comparing both games was pretty similar for Flynn: dealing with a good pass rush, but a very suspect secondary. The Lions in particular depend very highly on getting great pressure on the quarterback, their secondary is very exploitable when they do not. That's kind of a twofer for Flynn there, and it makes him that much more of a risky proposition, because both performances offer very similar opportunities, so they display the same strengths and weaknesses.

Packers in three wide with a single back. Flynn sells the playfake well and two of the Lions linebackers seem to bite. Nelson is running a go on the sideline, and was jammed very effectively to the outside. Flynn's pass is very badly placed, too far to the inside. Where Nelson might be if he hadn't been jammed outside. 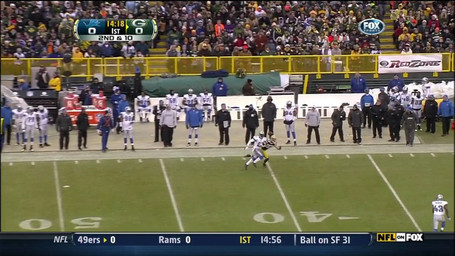 Five players release into routes here from a 3-wide formation. Flynn executes a three-step-drop while the Lions rush five. The pocket collapses very fast, mostly due to Kyle vanden Bosch and Sammy Hill. There are two open reads crossing the middle, and Flynn attempts to step up and throw, but the rush arrives too fast. Hill hits him from behind and knocks the ball loose. 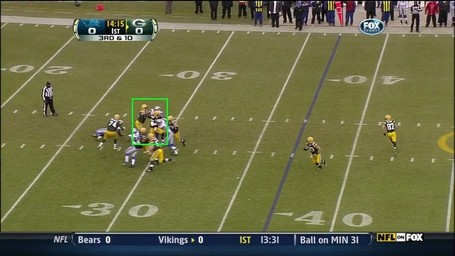 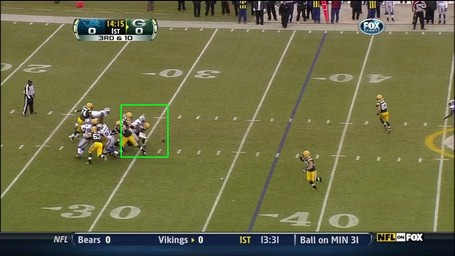 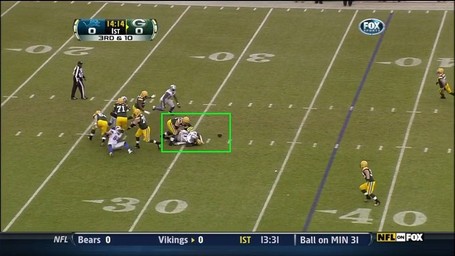 The second drive is very shotgun-heavy, and again features a bunch of 3rd down conversions by Flynn. The Packers are not an offense that fears 3rd-and-long.

This play was typical of the Packers early game plan. The Lions came out (and continued to play) a lot of zone and Tampa-2, and the Packers offense worked very hard to exploit its soft zones. The Lions are in a nickel zone look here, with Eric Wright as the nickelback. The middle and outside linebackers are pulled into deep zones as designed, but Donald Driver runs a short hook, while Finley runs the same. This makes it very easy for Eric Wright to squat in both their zones, and he helps break up Flynn's pass, though it appears to be primarily Finley alligator-arming it. Finley calls for a flag for some inexplicable reason.

And the Packers go right back to exactly the same offensive look: Finley inline to the right, Driver to his outside right shoulder. Flynn is talking to his players right before the snap, probably changing their routes. 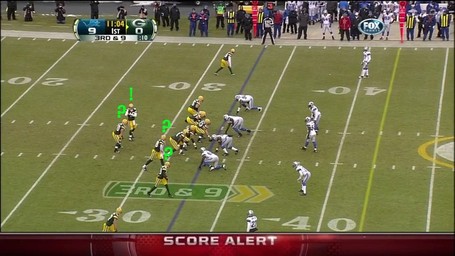 This time, Driver runs a little deeper, Finley squats a little short of the first down marker, and Wright is outside of Finley as he is hit on his numbers. I'm not sure this is a first down, but the refs say it is.

Packers go four wide with Kuhn as the single back. Packers are playing in nickel, with man coverage. Nelson and Driver cross. Nelson is zig-zagging his route trying to shake some very tight man coverage and manages to create separation. The pocket collapses to the Lions six-man blitz, overloading from the offensive right, but Clifton walked Lawrence Jackson past the pocket. 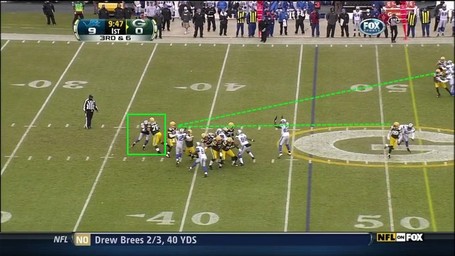 Clifton consistently times the snap better than anyone on either line, while on this play LoJax really gives up on this play much too easily, which allows Flynn to roll out to his left. He's chased down and Avril hits him as he throws to Nelson near the sideline. Exactly the kind of play our FO wants QBs to be able to make. 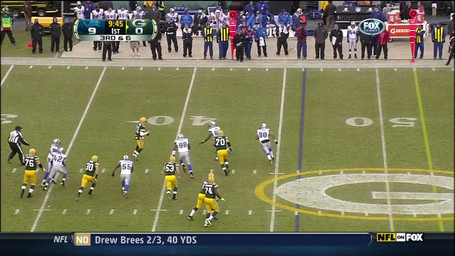 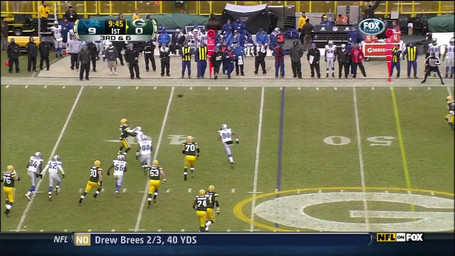 After an ugly, wobbly ball into the endzone from Flynn (hit as he threw), the Packers are in another three wide, single back formation. Four Packers release, Lions rush two on delayed blitzed, which means there is zero underneath coverage. Flynn picks the best option, Finley crossing near the hashmarks, and throws a nice ball his way. 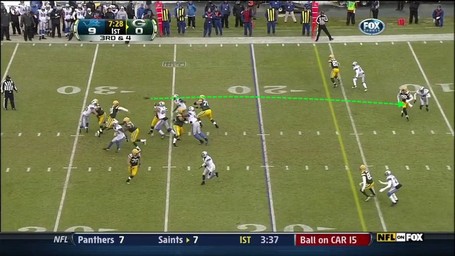 This really bugs me. Twice in this single drive, Flynn guns it to Grant with bodies around him, well behind the line of scrimmage. You can hope for a short gain, the worst case an unfortunate flip and pick (and Grant indeed tips up the ball twice), but the most realistic scenario is Grant to catch it and then be tackled for a loss. Why make this throw, especially when Driver is so clearly open at the 3? Call it early game jitters, but Flynn is reacting very badly to pass pressure at this point. 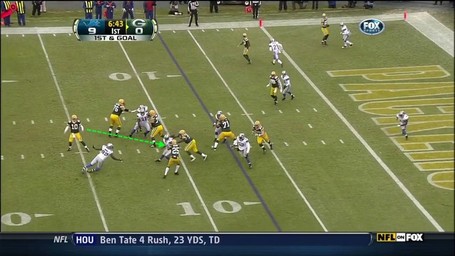 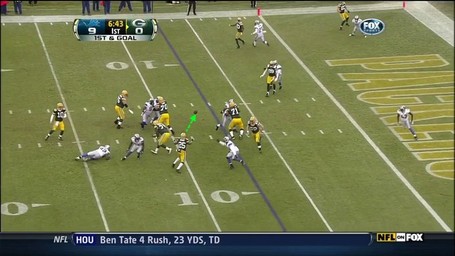 Packers line up to sell run, with the extra tight end Crabtree in a fullback position. Lions adjust and shift assignments as Crabtree motions. The Lions are playing with 4-5 yard cushions on both wide receivers. Snap. The three linebackers and the safety in the box are all stepping forward as Flynn shovel a low ball to Nelson behind the line of scrimmage. The cornerback attempts to tackle him there but Nelson stiff-arms him to the ground. He is slowed down, but safeties Chris Harris and Amari Spievey aren't in position to pick him up. Bad defense, good stiff-arm.

The Packers are in a three-wide formation, releasing four. LB DeAndre Levy rushes at the B-gap before the snap and hits it hard, while another linebacker follows on a delayed blitz. The Lions have tight man coverage on Flynn's reads right, and 8-10 yard cushions on Nelson and Driver left. Grant chips Levy just a little bit, enough to delay him a fraction of a second, and is then open for the catch. 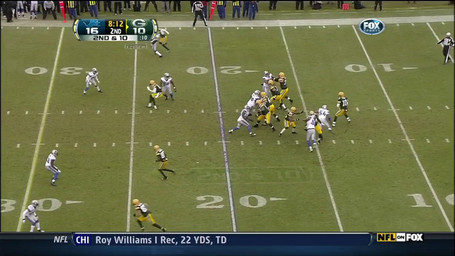 Flynn looked to his right momentarily, then dumps it off to Grant. 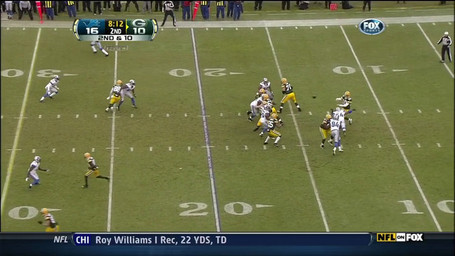 Driver has one important block, but otherwise it is mostly Grant outrunning defenders and defenders taking bad angles that does it.

One side-note: on this play, Avril drops back into man coverage on Finley, and releases to chase down Grant all the way to the 10. If the Lions can't pay him, he would fit our current defensive concepts pretty well, especially if we try to get more Elephant LB-esque play from the Leo End position, though he is not a great run defender.

Packers are in their 3-WR look, Lions answer with a nickel package, and their defensive ends in wide nine (they play a lot of wide nine). Driver is in the slot, with Eric Wright in tight man coverage. Nelson is to the outside with Alphonso Smith playing with a large cushion. Pressure is not a factor. Smith breaks to Nelson's inside right at the snap, but Flynn does not read the coverage correctly, and Smith cuts inside to intercept the ball. Flynn struggles consistently reading any kind of over coverage, particularly from safeties, and does not anticipate defenders cutting into routes well. 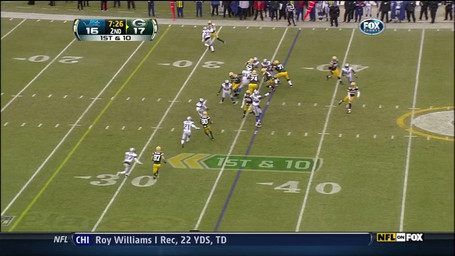 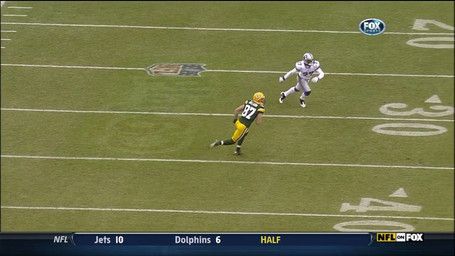 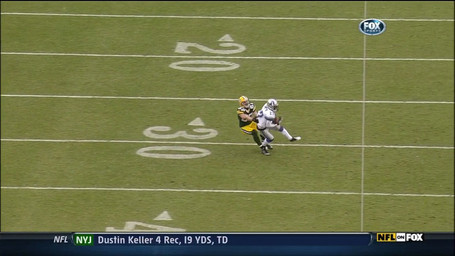 The Packers are in three wide. A Lions defender jumps, so it's a free play. All the primary reads are deep routes, with Nelson's the deepest, which is pretty typical of the Packers style of offense. Alphonso Smith is on Nelson, and he's playing with his usual 6-7 yard cushion. The Packers obviously like the matchup of a taller wide receiver on Smith, because they target it a lot. And for good reason, usually. Smith just Kelly Jenningses up this play, he's got tight coverage but doesn't even try to make a play on the ball. 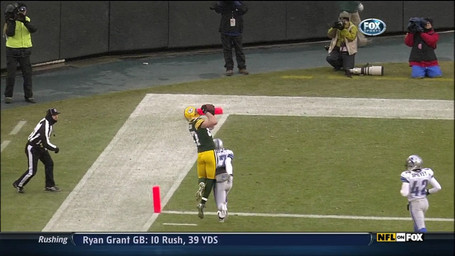 I rewatched this one in All-22, and it confirms the Lions safety put himself out of position sneaking too close inside, while both safeties simply look too slow to help out Smith. Safeties being too slow to help out on Flynn's rainbows is not something you will see often in the NFL.

This is such a typical Packers playcall: they are in 22 on 3rd and 1, everyone is reading run. The Lions have five guys on the line, 9 guys in the box, and a single corner in tight man coverage on Jones. Jones is jammed hard while Flynn playfakes. The Lions all bite, except for Levy who drops back into middle coverage. Flynn has to adjust his throw a bit to account for Levy, but the linebacker doesn't have his head around yet to make a play on the ball. Flynn leads Jones, who has a corner and safety over him. The ball is too low and leads Jones too far, and he only gets his fingertips on it. 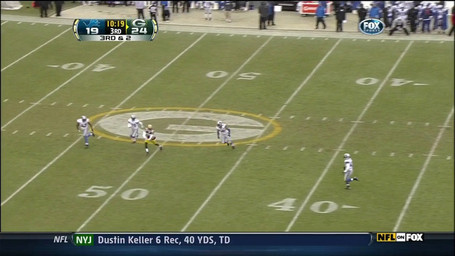 We're a small way into the second half now, and the writeup so far covers the worst parts of his play against the Lions, from early-game jitters to a few sloppy throws and bad decisions. Flynn settled down and only got better as the game went along, which is makes sense considering he is a player who is starting only the second game of his career.