So, including this part, I've now written about 8623 words on Flynn. That's a little much, and if you joined us not for analysis and musings but just for clear-cut conclusions, feel free to skip to the end. I won't mind.

As Jacob Stevens pointed out in his own excellent writeups, it's impossible to watch the Packers play and not be impressed by their scheming and wide receivers. Hark back to my week II writeup, where even rookie Randall Cobb (their version of Golden Tate) just jumped out at you on tape. This game was without the best Packers receiver, Greg Jennings, but even without him their receiving group (including all pass-catchers) looks better than ours ever has this season.

Doesn't that just set off some mental bells? You can never really separate quarterback and receiver play, especially not on such a small sample. Should we really see Flynn excelling as an indictment on Rodgers, as some have joked? Not really. Rodgers is so far beyond Flynn, and such a significantly more complete quarterback, the comparison just seems silly, but they do share certain skills, Flynn can match Rodgers' accuracy on short throws, and he is equally skilled in timing, isolating matchups and throwing wide receivers open. Sure, it helps both quarterbacks that the Packers receivers are so good at creating separation, but you still need a quarterback who can identify and exploit these matchups, or even create them with the right audible or correctly placed ball, which is something Flynn and Rodgers can do, but someone like Tarvaris Jackson can not.

The tight end motions in pre-snap, leaving the Packers with three extra blockers in a max protect scheme, two receivers on the outside. Flynn has a ton of time, checks both his reads, and gets a very easy completion to Nelson. As mentioned, this is an important part of analyzing this game: even without Jennings, the Packers wide receiver group is probably still better than ours, and are a joy to watch in their ability to create separation, physically dominate, and how well-coached they are in concentration as hands receivers. See below: Smith is tightly covering Nelson initially, but Nelson shakes, reverses and frees himself up. 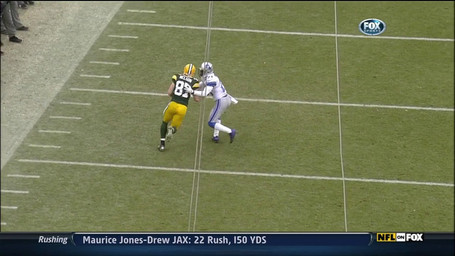 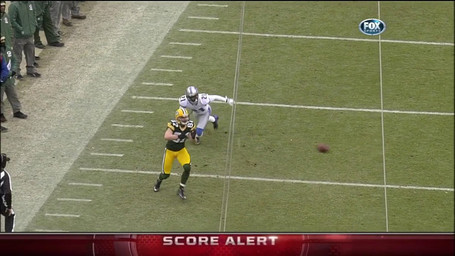 The preceding play, they ran out of the 12 set, and they go back to it here. Flynn motions out tight end Tom Crabtree to the right, and tight end DJ Williams in prior to the snap, to account for Cliff Avril in a wide 9 on the offensive right. The Lions shift slightly to the underside in response. Flynn fakes the handoff and the linebackers and safety bite pretty hard. The other safety drops back but does very slowly. 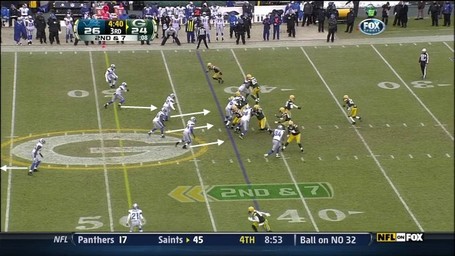 Flynn takes a lot of time to wind up on any deep throw, and you can tell he has to kind of put his entire weight behind the ball to push it out, but this one is as well-thrown a deep ball as I've ever seen from him. Houston has good initial coverage on Nelson but expects him to break outside, and the moment Nelson moves to the inside you can tell Houston panics and just tries to keep up with the wide receiver stride for stride. He still gets a hand on the ball, but Nelson secures the ball very well and runs it in from the 18, simply outmuscling the cornerback. 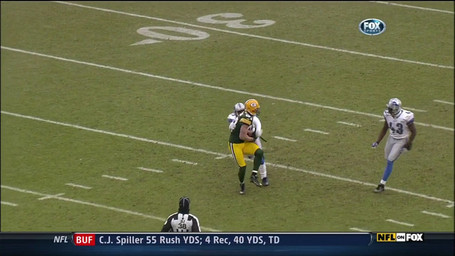 That's 40 yards of air, and from an arm strength standpoint the best throw I have seen Flynn make. Fairley hits Flynn right after the throw. Another display of poise from the young quarterback.

This one is not pretty (Suh sacks often aren't). The Lions blitz five while playing pretty tight man coverage on the four Packers receivers. Suh is singled up on the left guard (Evan Dietrich-Smith, the Packers had pulled a chunk of their starting offensive line by this point) and pretty much has him beat from the snap, powering through the B-gap. Flynn pats, pats, pats, and despite staring at Suh's side, does not attempt to roll out. Suh does the champion belt/discount double check to celebrate, Dietrich-Smith is flagged for holding

This drive looked dead earlier on a sack that was called back on a defensive holding penalty (a very Lions thing to occur), and now the Lions are playing it very close looking for a big stop. They sell-out the blitz, rushing six, while the safeties are playing it close to the first down marker, with no one in high coverage. Packers are in three wide, with Driver in the slot and no one in man coverage on him. This is a lack of adjustment from the Lions, who are overloading the blitz on the offensive left. The safety looks to pick up Driver, but he is giving him too much of a cushion, and Finley runs into the same zone to further confuse coverage. In fact, Finley seems to think he's being thrown the ball, and Driver cuts the ball's path, like a corner intercepting it. More likely a bit of confusion than clever play design, but it works. 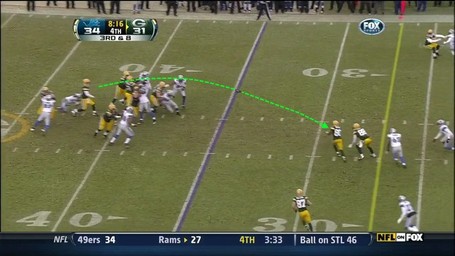 From there, it's Driver versus slow safeties (maybe I'm just too used to watching Earl Thomas). You can see another receiver signal touchdown as Driver cuts at the 25-yard line, it's just that obvious a done deal.

I think "situational awareness" (knowing what plays to make in which situation) is a very important aspect of quarterback play, and it's never more on display than in the two minute drive. Flynn has one of them at the end of each half, and in both he maintains his composure very well and gets the offense back on the line quick when needed. He is allowed to still work the middle as the Packers have enough time or timeouts, and the drives result in a 47-yard FG attempt (and miss) and this drive, which ends in a touchdown.

That said, he is bailed out by the Lions defense back-to-back on this second 2-minute drill: a Suh encroachment gives them a free first down on a 3rd and 3, and the throw following it should have been picked off. Packers in four wide, Flynn reads Driver and Nelson. Driver trips which frees up his man, but this is a really bad decision anyway, a throw into double coverage towards Nelson. McDonald almost has it, but ends up tipping towards Wright, who also gets a hand on it. Blame it on overconfidence, this is one of the worst decision I've seen from Flynn, and should have been a pick. 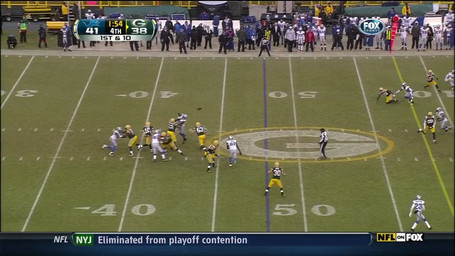 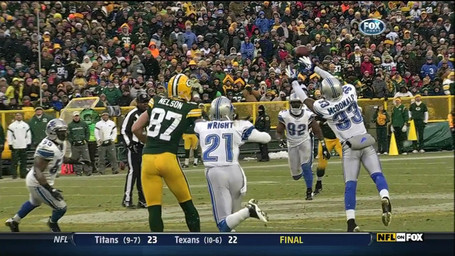 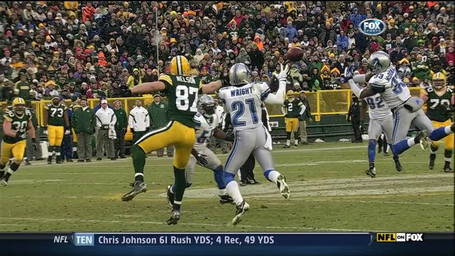 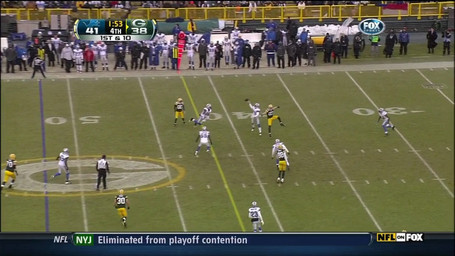 Packers are in four wide, the Lions in a Tampa-2. Thom Brennaman (and boy, did he and Billick have a good night of it) goes "uh-oh" as Flynn winds up to throw, and it's immediately clear why: the slot receivers locked the linebackers and safeties to the inside of the field, and neither safety is close to the isolated matchup of Houston on Jones running a go on the sideline. Flynn steps up, winds up and lofts it, hitting Jones in stride. This is another good deep ball. 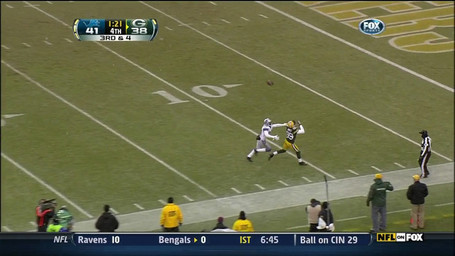 But just look at the way Flynn has to wind up.

That's a whole lot of wind up, and a lot of weight behind it. Thanks to BN's Sander, I just happened to be watching Josh Freeman yesterday. At times, Freeman will plant, and with absolutely no windup just shortarm the throw at his receiver. It looks ridiculous, but he actually throws it with great velocity. Flynn will never be able to do that. He needs a long windup and has to put all his weight behind the ball to push it this far. His mechanics are decent, but that does require perfect timing, and still his success depends on the isolation of the deep matchup.

When I look at quarterbacks, especially on the NFL level, I follow the Greg Cosell school of thinking when it comes to elements of play I focus on. These are pre/post-snap reading, arm strength/precision and pocket presence. These are broad, inclusive concepts (reading includes decision making, presence includes pocket movement), and not the only things I look at, but it does primarily determine how highly I regard a quarterback. My notes for Matt Flynn:

Matt Flynn is definitely worth a look for NFL front offices. He reminds me of a young Matt Hasselbeck in many ways, though not necessarily of Hasselbeck at his peak. But like Hasselbeck, he looks like a guy who can certainly excel, but he does need the right system (and talent around him) to do so. The obvious system to point to here is the classic West Coast Offense, and the most obvious team the Cleveland Browns. If not the Browns, then one of the teams raiding the Packers FO/coaching staff, possibly the Miami Dolphins.

What about the Seahawks? Well, I'm not great at trying to predict what this FO will do, so hopefully Scott Enyeart or Rob Staton will pick up some indications later. If I just had to analyze from the barebones, I kind of agree with Rob Staton's initial take: Our front office likes players with athletic upside at every position, including quarterback. And our system calls for a plus-strength arm and plus-speed legs, neither of which Flynn possesses. That said, by comparison Kolb was a very bad fit for our offense, whereas Flynn is a pretty good, but perhaps not ideal fit.

Personally, assuming he won't cost any picks and won't get a contract anywhere close to Kolb's, I could definitely live with our front office adding Flynn, especially since Schneider has much more familiarity with him than we'll ever have. Honestly, after scouting him out, I don't see how any NFL front office could give him a Kolb-level contract, and if the Packers franchise him I don't see them getting a first round pick for him - even the lower of the two Cleveland first rounders would be asking too much. That said, the reality is teams like the Browns are quite likely to outbid us either with money or picks as the situation will warrant, and I do not really think that is a bidding war our front office would be that interested in diving into. I don't think he fits that well with the kind of free agents we've seen our front office add, or with the model of quarterback we've seen in every addition they've made.