When I first told people that this was going to be my first offseason study, I was met with mixed reactions.

I am one of the more gregarious, sanguine people you'll meet, and details haven't always really been my thing. I am generally a very pleasant and charismatic soul. But... well, we'll put it this way: when I was younger my grandpa had two pet sayings for me- "If common sense was gold, you'd be about a plug nickel" and "If silence was golden, you'd be dirty copper." You would never have described me with words like "thorough", "detail-oriented", "hard-working", or "reliable." So most of my family raised a collective eyebrow when I happened upon an accounting major after a year and half spent in college trying to pin down what I "want to be when I grow up."

You see, despite my personality's prevailing inclinations, I have a deeply suspicious and analytical side, and I have spent/wasted many days in my life searching for the underlying thread linking various phenomena. I always want to know Why??", to find patterns or coincidences that might give deeper insight into any particular reality. This is what made advanced statistics -- in both the NFL and the MLB -- so incredibly appealing to me.

Well, I quickly learned that accounting is super interesting and a lot of fun- until you get about a year and a half into accounting classes. Then it starts really sucking. Consolidation of financial statements, translation of foreign currency financial statements, income taxation, and all that sort of lovely stuff. So I came to my senses and switched to international business, which is just a lot better (read: easier). However, I'm a glutton for punishment and I didn't want to let myself off easy. So I picked an insipid self-flagellation of a project to take up the next two months of my life, because, you know, apparently my life wasn't boring enough yet.

So what does this have to do with you guys? Well, pretty much, I understand that most of the nitty-gritty of each of these articles isn't going to be all that interesting. And the parts that do catch the eye are typically going to be of the ire-raising sort. It's never especially fulfilling to read in graphic detail all the myriad of ways your favorite team cocked up its own season.

But I'm not really going through this whole process purely for the process itself. If at any point I begin to derive pleasure from the process of wading through this tripe, please recommend me for institutionalization. No, my goal is to be able to truly and accurately analyze this "penalty problem" as it relates to this team going forward, and the only way to establish a basis for that discussion is to remove the noise from the equation. A number of factors cloud the picture right now- no offseason coupled with high turnover and a lot of rookies, veterans who won't be around next year, and referee bias, among other things.

So bear with me, despite the bland and aggravating nature of the project- in the end, our discussion will be more informed for having survived the journey.

This wasn't a pretty game for either team. I'm not even going to address the Seahawks here, other than to say that this year was really the tale of two seasons. The Seahawks' offense in this game was beyond putrid. It may have been the most pitiful offensive performance I've ever seen from this squad. The defense played a pretty inspired game, evidenced most emphatically by their goal-line stand on the Steelers' opening drive. But beyond that, nothing redeeming can be found in this game. Really. Nothing.

This is the play that came to epitomize Brandon Browner in the eyes of 90% of NFL fans.

The Steelers are in three wide "11" formation with Heath Miller as the inline TE off right tackle. Antonio Brown is out wide left, Mike Wallace is in the right slot, Hines Ward is in the right slot, and Isaac Redman is flanking between Miller and Ward. Browner is in slightly off man coverage on Brown, about 5 yards off. Just before the snap, Brown goes in motion behind the entire formation and Browner drops back into a zone coverage.

Ball is snapped, fake handoff to Redman coming across right behind the line. Miller is tasked with blocking Red Bryant alone, and he does a pretty good job considering. Wallace just runs a go route right up the seam. Browner isn't completely beat as he has the footspeed to nearly run with Wallace, though he lacks the pure acceleration. However, as the ball begins its decent and Wallace cranes around to make a play on it, Browner reaches out and grabs his left shoulder, pulls him, and swings an arm across his face and chest. If he'd adjusted to the ball, there's a chance he may have been able to make a play on it, at least to swat it away. But no.

The replay doesn't show enough, but I wonder where Earl was this whole time. He's behind the play, running to catch up, but far too late. The Steelers were blocking with six, Seahawks were rushing four, and Brown was just coming out from behind the formation off into the right flat. Only Ward and Wallace actually went out into routes, Ward on a corner across the defense and Wallace on his go. This is a pretty good example of why I kinda hate it when the Seahawks play zone. They kinda suck at it.

Honestly, I don't think this play is entirely on Browner's head, as he should reasonably have had help over the top. And given that he prevented a touchdown, and the defense eventually held them at the one yard line, I supposed this could be considered a win.

Nothing to see here. Couple of offsetting fouls. The McCoy foul is obvious. Can't see the Foote block in the back on the broadcast or the replay.

Other notes on this play: Moffitt narrowly avoids a chop block penalty as he dives at Casey Hampton's knees while Max Unger is blocking him; James Carpenter throws a nifty little cut block to quickly take down Aaron Smith; Russell Okung chips James Harrison then plows into Lawrence Timmons- this kid likes run-blocking; and finally, Anthony McCoy handles Harrison almost single-handedly, apart from Okung's little chip, and he stonewalls him pretty well, though Lynch wastes the good block by running up the tight end's back trying to cut back.

Russell slowly begins creeping his left foot about two seconds before the snap. Odd thing to do.

It's good that Keisel tipped this ball, because I'm pretty sure William Gay would have taken it back for six. I've circled Baldwin- notice where he's at as he breaks to the inside. 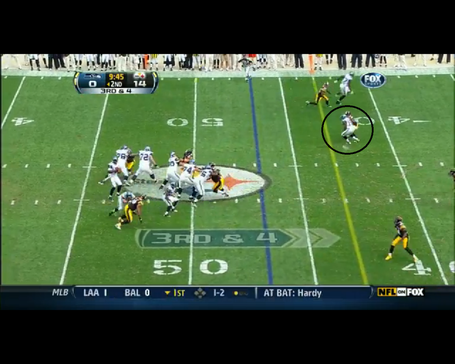 The ball should already be in the air.

The "Brock gets tripped into Big Ben" play. This is a pretty bad call. It's fairly obvious he gets tripped and isn't intentionally gunning for Ben's legs. Bill Leavy makes this call himself and he has a pretty clear view of it. Here's the all-22 angle, with a little helpful hint in case Mr. Leavy happens to be reading: 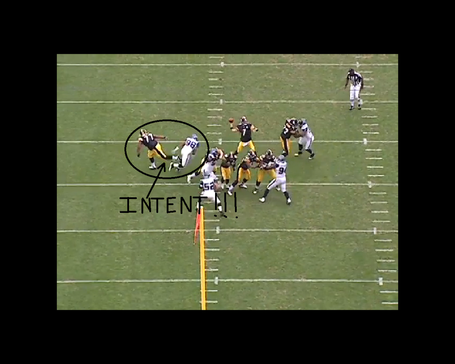 Jackson's hard count gets both Okung and Carpenter, but Russell's jump is more egregious.

Sanders covers the tight end in his formation, and Clemons jumps across.

This is inexcusable. The Seahawks break their huddle with 15 seconds on the game clock. They're set with between 4 and 5 seconds. Then Jackson calls Baldwin into motion at about 2 seconds, and they're not even close to getting the snap off when the clock hits 0.

This was the sort of incompetence that littered the Seahawks offensive performances early on. Thankfully, they built and grew from such mistakes, and we saw a lot fewer penalties like this by the end of the season.

I've created a spreadsheet to keep track of penalties by type and by player, and I'll link to it below so you can access it and fiddle with it at will. I'll continue to update it after each game. 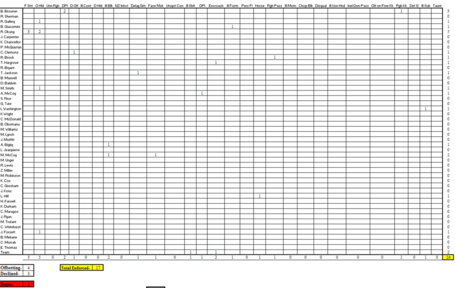 A small caveat regarding "bogus" penalties- these are plays where I can look back at replay and say explicitly that it was a bad call--that is, that the penalty called actually never happened, or was called on the wrong player. I'm not going to include rules where I disagree with the application, like the Brandon Browner roughing the punter in Week 1, or the Raheem Brock tripping call this week. While I may disagree with the ref's perspective, he's watching it in real time without the privilege of slow-motion replay from multiple angles, so I'll not quibble in those cases. But if a false start is called and no one moved, or a pass interference is called and the defender never made contact with a receiver, those will be considered bogus calls.