So I suppose the end of a season is as good of a time as any to do a little administrative house cleaning, and with that in mind I wanted to re-post the site rules and regulations and just give a quick "Welcome!" and "thanks!" to new members and readers. See more after the jump!

It's been a year or so since I assumed the stewardship of Field Gulls after John Morgan's departure, and have learned a lot along the way. I give most of the credit for that to you readers and commenters (and John, for establishing such an amazing blog). With John pursuing other endeavors, the site was bound to change a little in his absence and to those of you that dislike that I offer apologies (despite the fact that there's not a whole lot I can do about it). I felt a little bit like "your mom's new boyfriend" for a while and it was a bit awkward at first. Hopefully, you've found that I'm a nice guy that has something to offer and maybe after you're done reading this we can go out in the yard and play catch, pal.

I have striven to 'be myself' as much as possible and in an effort to provide a wide range of topics, voice, and perspective, I have reached out to many-a--new-writer and built up the staff here to it's current glorious ranks. If there's one thing I'm most proud of in my time at Field Gulls, it's the crew of talented writers that have been assembled here.

All you people, stand and be recognized: 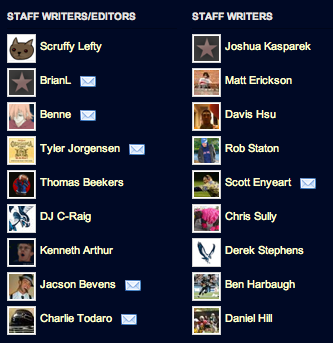 (Yes, I was too lazy to write out all their names)

My vision has always been a 'community' feel where anyone can come and read the latest news about the Seahawks, the most in-depth analysis about the Seahawks, and the most entertaining articles about the Seahawks. Also, with the thought in mind that most Seahawks fans like the game of football, I have written, and encouraged Field Gulls' writers to broach subjects, like the NFL Draft, college football, and just general football philosophy and history from time to time. If we get off the "Seahawks" track once in a while, it's because I like the idea of educating readers on more than just what is happening in Seattle and it makes us all more savvy football fans. Hopefully that's cool with you. Regardless, at our core, we're a Seahawks blog, and that will never change (unless they move to Oklahoma City).

Anyway - I wanted to sincerely thank all the writers, commenters, contributors, and fanposters at the site because I absolutely love coming to Field Gulls on the daily because of you. I don't hang around here all day to read my own shit, that's for sure.

The following is the final set of rules and regulations decided upon by the community of Field Gulls. I haven't personally added anything or taken anything away, but if I were to add emphasis or my own words to it I'd say this:

Have fun. Don't be an asshole (this might be an unspoken rule, but it's the most important one). Use the rec button liberally, it's a great way to encourage the writers (seriously, it's kind of sad how much I hope to get recs). Adhere to the commentary rules because it's really annoying correcting you all the time. Be nice to strangers, and that includes 49er fans.

Don't talk about religion, politics, and don't be a racist, sexist bigot moron (goes along with the eminently important "don't be an asshole" unspoken rule). Don't complain about us enforcing these rules because when you joined, you agreed to adhere to them. No one likes talking about this stuff and it's one of those things that I'd rather not bring up, but every now and then, it's essential. Ok, so please refresh yourself here.

Abuse of the following rules will lead to comments being hidden or deleted as well as immediate banning, possibly without chance of reinstatement.

Sexism, Racism or other Bigotry: MTV raised you right. You know better than to use "gay" in the pejorative. Cull the sexist, hate-filled slang from your vocabulary or expect an immediate ban.

No Politics or Religion: Just don't do it.

Name Calling: Except to call Scruffy "Lance". He likes that. This has never been a problem here, but for the sake of comprehensiveness, let it be known that name calling of any kind will not be tolerated.

Spam: One and you're done.

Hoaxes: False headlines used to capture attention will be rewarded with a deletion of the post and a banning. Misreported news of any kind is not allowed.

Trolling other blogs: Absolutely not. Do this and you will be banned here at FG.

Mods will enforce standards through a three strike system: correction, warning and finally banning. Mods will not punish innocent errors, but habitual abuse.

Links: A link must be provided for all news and quoted material.

Spelling and Grammar: The readers of Field Gulls are Field Gulls. Therefore you are held to basic editorial standards. Commenters must attempt proper spelling and grammar within the best of their ability. Many internet browsers have a spell check included.

Subject Line: The subject line is the small box above the body of a comment. SBN software requires this box be used. Use it.

Reply: The reply button is below and to the right of a posted comment. It's a wonderful organization and communication tool. Use it.

Site etiquette is to be enforced at the moderators discretion. It is a catch all for behavior not explicitly covered by the above rules that can be abusive to the site, those who contribute to the site and its readers.

Belligerence, Fault finding and Trollish behavior: Rudeness can be couched in the nicest words and divisive and destructive commenting can be framed as civil discussion. Persistent negative comments, thread-jacking, fault finding, petty correction, stubborn ignorance or illogic, meanness, calls to perfection, refusal to drop an argument, unfounded claims of prejudice and other acts of self-importance will be dealt with on a case by case basis. tl;dnr, don't be a jerk because you're behind the internet cloak of anonymity.

Judging the fandom of others: You don't get to decide how much of a fan someone is. If you do this, expect the community to be very angry with you.

Keep front page posts on-topic: Unless specifically designated, comment sections are not free-for-alls. Your comments should be about the post itself.

Use the Rec button!: It is there to be the virtual equivalent of a head nod/fist bump/Amen Brother. This keeps the comments sections clean, concise and content heavy while allowing people to express their agreement in a visible way.

Fantasy discussion is for the weekly fantasy post: Fantasy comments outside of the post may be met with sarcasm.

Chat Speak: No longer accepted. "+1", "LOL" and "roflcopter" are examples of this.