I did have a busy week. I won an iPad on Thursday, and I've been chronicling my dramatic loss of 150 pounds on my website (if you're interested in that sort of thing.)

But if I want to accomplish this goal of watching all 256 games, I'll have to step up the pace. Perhaps watching on the iPad will help? We'll see. I watched some good games this week, Kevin Walter makes perhaps the craziest play of the year, and a game of Boley-Bradford-Ball-Face. All below, so check it out!

DeSean Jackson drops a TD and Jeremy Maclin makes a TD catch two plays later. This is only part of the reason I prefer Maclin to Jackson. 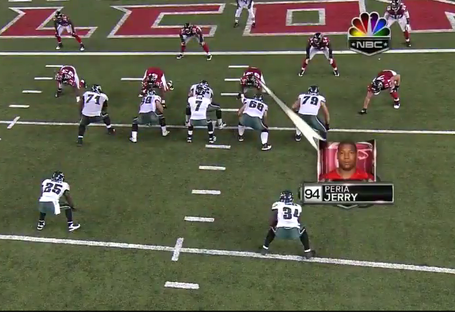 Peria Jerry (Not Jerry Peria) goes unblocked as the guard pulls and nobody at all picks up Jerry. This is how unguarded he is to Michael Vick: 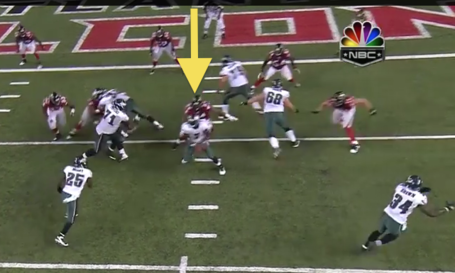 He forced the easy fumble and Ray Edwards returns it to the Philly 24. A few plays later, Tony Gonzalez scores (and looks very "classic" Tony) and its 14-10 ATL instead of 17-7 PHI.

Early 2nd half and Vick throws a pick. It is his third turnover of the game. 14 points off of turnovers for Atlanta.

Matt Ryan with HIS second interception. LeSean McCoy scores and its 24-21 Eagles. McCoy is just so very, very good and hard to stop.

Matt Bosher punts from his own end zone and gets it to the 20. The Atlanta 20.

So the Eagles shut down Michael Turner for 3 and a half quarters, and he just broke a 68-yard run with the Falcons down by three points. I can't say that the Eagles defense had a bad game, but just this one terrible mistake. Also, Michael Vick is out and Mike Kafka is in, which doesn't help the Eagles either.

For his NFL debut, Kafka didn't do too bad. I mean, he was only asked to drive the Eagles 90 yards in three minutes and he almost did. He had one really beautiful, accurate deep pass to Maclin, and then Maclin dropped a first down catch on 4th and 3. Game over.

Lofton: The middle linebacker can best be described as "active." It seems like there are two of him. The 2008 2nd round pick gets to the ball quickly, is good in coverage, and once he makes contact, the runner wouldn't get another half-yard. He makes me miss classic Lofa. A really solid player and I see no reason why Atlanta would ever let him go.

Manningham makes the first catch of the game on a low Eli pass. Then gets wide open, Eli Manning underthrows him and it's intercepted.

Sam Bradford completes his longest pass of the year, a 70-yarder to Danario Alexander. This is the Rams versus the Super Bowl Giants in case you forgot.

They settle for a FG from the 1. Then on the next punt, Greg Salas muffs it. Oh, this IS the Rams versus the Giants.

So Steven Jackson missed this game with injury, which meant Cadillac Williams got the start.

Sam Bradford passes it to Williams from here: 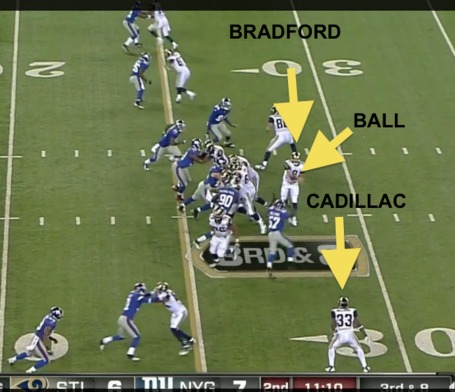 He clearly throws it behind the line of scrimmage. 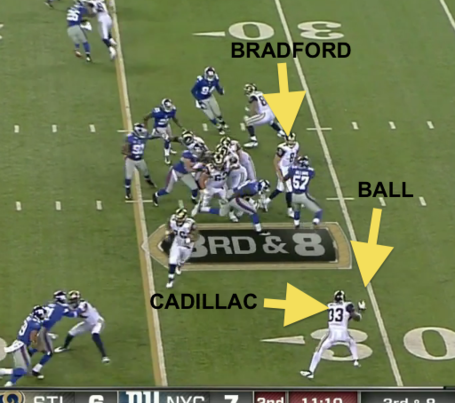 Cadillac muffs it and dejected, walks away. Now we add Michael Boley. This is "Bradford-Cadillac-Ball-Boley": 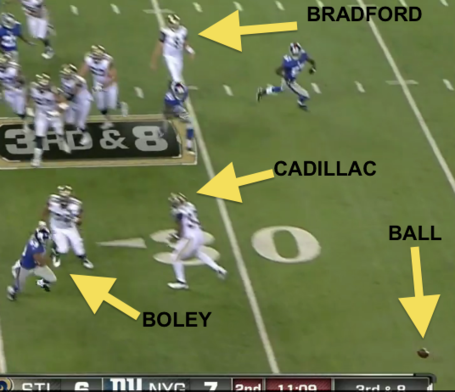 Cadillac still doesn't get it. 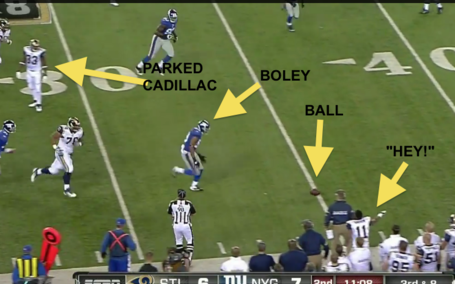 He's still standing absolutely still and even Sam Bradford tries to chase him down. Now this kid has to pay for it: 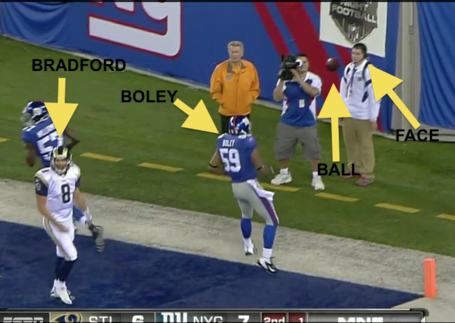 Instead of taking at least a 9-6 lead, the Rams go down 14-6 because Cadillac neither caught the ball nor recognized what everyone else did. And now that kid has no face. Good job!

Bradford still looks good to me. He has one receiver that looks decent, and that's Alexander. He made some really nice catches but they have 0 other threats. Rams should draft LT/WR at the top of their draft.

Manningham played well too. He led the Giants with 56 yards and made a couple of nice catches and he sort of reminded me of the Rams' Alexander. He was able to get wide open behind the defense several times, but is that the Rams fault or Manningham's speed? He's not nearly as good as Hakeem Nicks, but he could be a nice #2, something the Giants don't need anymore.

Orton throws an interception in the 2nd quarter. So far, it looks like he throws the ball with great velocity and has a quick release, but is consistently just missing his target. He overthrew Daniel Fells and it was an easy pick.

R.I.P. Kenny Britt. One of my favorite receivers. 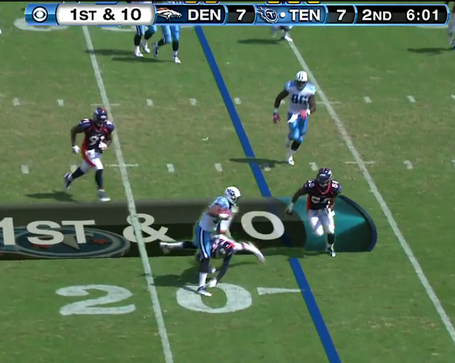 It looks like when he blows his knee he just chucks the ball away. Denver recovers. 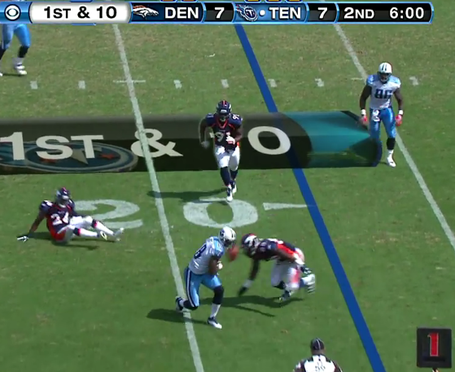 Tennessee punting and a bad snap causes the punter to take too much time and Denver will definitely block it, so he runs with it and gets 21 yards for a first down. Titans get a field goal to go up 10-7.

Broncos get either cocky or frustrated and go for it on 4th and goal from the 1. They don't get it and instead of up seven, still only up four.

Late fourth quarter, Matt Hasselbeck drives the Titans 95 yards for a touchdown and Orton throws one more interception to basically end it. John Fox tried to get cute by going for it on fourth and goal and the Broncos lost by three.

Orton? After three games, I still see a quarterback that is still worse than Tarvaris Jackson in many ways. He had a lot of balls tipped at the line of scrimmage, like his final interception that was the nail in the coffin. Is he strong? Sure. Can he throw a ball that looks pretty? Yeah. Does he know where it's going exactly? Doubtful. So even if the best case scenario is that he would "Challenge Tarvaris" I can't see what the benefit is of that. There's a slim chance he is a major improvement, so instead you risk poisoning the locker room. So again, where is the benefit? No thanks.

Yeah, too long of a break and need to knock some games out right now. Not sure how much writing I'll be doing while I'm watching. Let's find out.

It's almost halftime and these are the interesting things about this game: It's 5-3. Isn't that weird? Also, lots of rain. Apparently this was an interception. 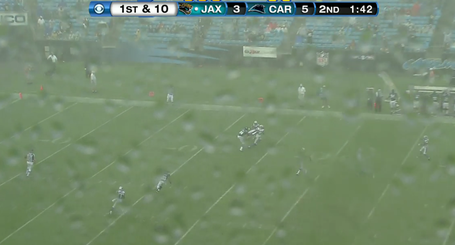 This is seriously ridiculous, kind of awesome, kind of scary. 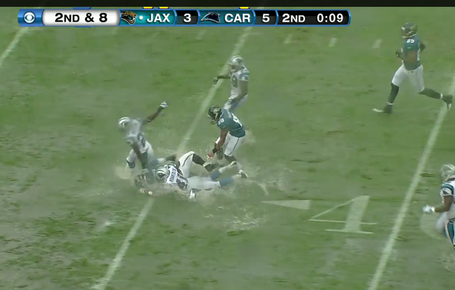 On the next play, Blaine Gabbert throws a 36-yard TD pass as time expires. Teerrrriibbblle defense by Carolina.

Panthers win 16-10. Maurice Jones-Drew is really good. Jaguars don't have any NFL wide receivers. They need to use their first round pick on one, I'd say.

I think Miami is better than Cleveland, but their red zone offense is terrible. Chad Henne looks okay. Colt McCoy does not.

Browns down six with time running down. They complete on one fourth down attempt. Then McCoy hits Muhammad Massaquoi for a TD with :43 left.

Dolphins have no excuse. They really blew this game.

Well, I know people would want me to say more about this game, but nothing has really happened. It's 3-0 Bengals at half. No turnovers, good defense, lots of punting.

Frank Gore loses a fumble on his own 16, but the Bengals settle for only a FG. It's 6-3 with nine minutes left.

For the first team all day, a team drives downfield and scores a TD. This time it's Kendall Hunter and the 49ers. Four minutes left and Andy Dalton throws an interception on the first play after the Niners went up 10-6.

Not much to really say here. The Bengals were a playoff team and the Niners went on the road and beat them. I'm just spitballing here, but if Trent Richardson falls to the Seahawks at 11 or 12, do the Bengals come calling as a trade partner? They need to replace Cedric Benson.

You'd be hard-pressed to find a Texans game this year where they weren't missing a key player. No Arian Foster in this one, but Houston marches down the field and Owen Daniels scores to make it 7-0.

If Matt Schaub and Jay Cutler don't get hurt, I honestly think the Super Bowl could have been Houston-Chicago.

James Casey on this diving 36-yard touchdown play. Casey had a better play than most players this season: 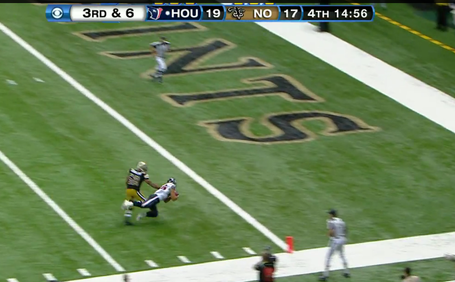 Well this is one of the most unbelievable plays ever.

Matt Schaub has led Houston down the field, down six: 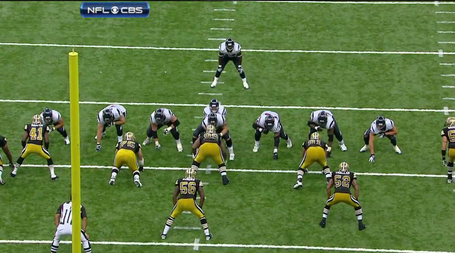 He throws it to Joel Dreessen, but Jonathan Casillas is there to break it up 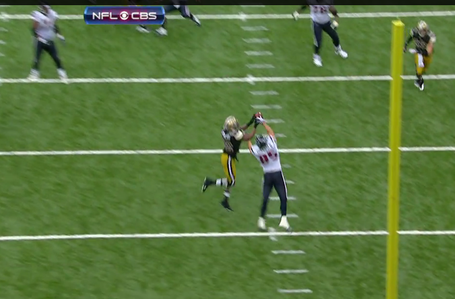 Casillas then bats the ball up in the air a little bit, where it deflects off of the arm of Patrick Robinson 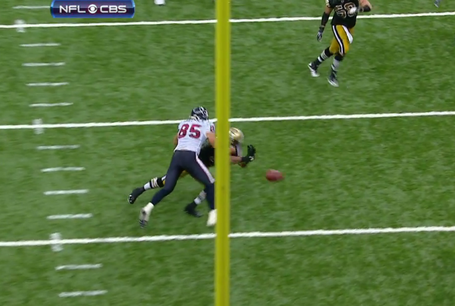 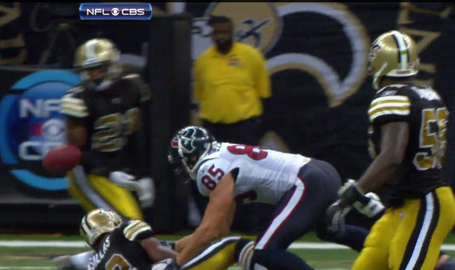 The ball finally finds itself in the hands of Kevin Walter, who runs it in for the go-ahead touchdown. 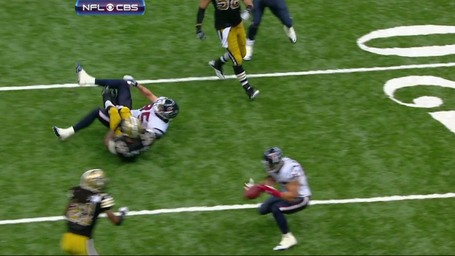 Now that, is one magic loogie.

Then the Saints just go down the field in a little over a minute to score another touchdown and another two-point conversion and another lead change.

Hell of a game and hell of an effort from Houston.

First quarter yardage: The Donovan McNabb Vikings 123, the Lions -7. But Minnesota only leads 6-0.

I really hate end-arounds, but Percy Harvin is an exception.

It's 20-0 at half time. Calvin Johnson doesn't have a catch. The deepest the Lions have been in Minnesota territory is the 49.

Avril gets around RT Phil Loadholt for a sack and a forced fumble on McNabb. Otherwise, Loadholt has done a good job containing Avril.

Calvin Johnson just caught his 2nd TD of the game. It's now 20-17. The Vikings then go for it on fourth and one deep in Detroit territory. They fail. Hey, don't take "Losers Kick Field Goals" so literally.

He was the last pick of the 2nd round out of Washington State (Spokane native) in 1992.

The first pick that year was Steve Emtman, also a native of Spokane. (Emtman went to Cheney High and Hanson went to Mead.) Emtman played in 50 career games. Hanson has played in 311 and counting. Other players in that draft included Heisman winner Desmond Howard, who went to his only Pro Bowl in 2000 with Detroit and the first QB taken was Dave Klingler at 6 to the Bengals.

Hanson has 18 seasons as a "starter" in the league. If you add up the full "starting seasons" for all of the top 6 picks (Emtman, Klingler, Howard, Quentin Coryatt, Sean Gilbert, and Terrell Buckley) you get 23 seasons. Buckley and Gilbert with six each. Howard as a primary special teamer in his career and Emtman destroyed by injuries.

Vikings kicker Ryan Longwell ties it at 23 to send to OT. Longwell, who is 37 and was born in Seattle, came into the league five years after Hanson.

At the end of the fourth Q, Lions LT Jeff Backus false starts twice in a row and then gets dominated by Jared Allen for a Matthew Stafford sack.

The Lions get the ball to start overtime, Calvin makes a big catch because he's the best, and old man Jason Hanson kicks the game-winner.