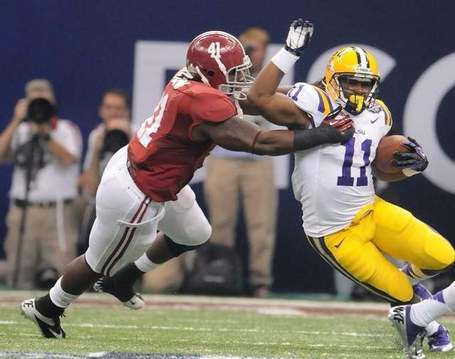 I hear it all the time, my fellow Hawk fans say "we should draft a stud pass rushing DE."

That's when I say "Okay. Who?" If they have an answer at all, it usually involves a certain Quinton Coples. That doesn't satisfy me much, because I don't see Coples as a very good option for Seattle. He can beast his way past OTs when he's so inclined to but even when he's motivated, he's still inconsistent rushing the passer and thus not a great fit at LEO. My instincts tell me we'll look elsewhere for our "stud pass rushing DE."

We already have a "stud pass rushing DE" in Chris Clemons but that doesn't mean we can't use another. Our pass rush dropped off significantly from last season mostly because we didn't get the same level of production from Raheem Brock on passing downs. Having Dexter Davis back will help but even so, grabbing another guy who could sub in at the opposite DE spot on passing downs would be a major plus.

The other factor to consider is that Clemons will be 31 next season and we have been heavily reliant on his pass rush abilities. If he had been injured this season then we would have been in serious trouble. Dexter Davis looked promising with limited snaps in 2010 but is maybe too undersized at 244 lbs to ever start at LEO. There are a number of LEO built prospects in this class so this might be a good time to invest in that area.

Courtney Upshaw has shot up the draft boards after an MVP performance in Alabama's rout of LSU in the BCS Championship. Upshaw is not a clean fit at LEO but now seems like a realistic option with the 11/12 pick. Upshaw is quick and strong. He jumps off the line, swims past blockers, and has enough speed to close. He's very stout against the run and surprisingly fluid in space.

I'm projecting him as a LEO because he will undoubtedly see time with his hand on the ground pinning his ears back. However, what really intrigues me is if he can prove capable enough in coverage to play WILL on early downs before moving to LEO on passing downs. Here is his scouting report and here is his 2010 TMBDraft analysis. Here he is against LSU and here he is against Auburn from earlier this year. Below you can see him in the National Championship.

Perry has a good build for the LEO position and an explosive first step off the line. He also has active hands and a nice repertoire of pass rush moves. He's maybe not quite the athlete that Clemons is but he's close. The USC connection is obvious but deserves to be noted. Here are Perry's 2009 highlights and 2010 highlights. Here he is against Utah and here he is against Stanford's probable top 15 pick Jonathan Martin this year.

Branch is a high-motor guy with long arms and quick hands who is relentless as a pass rusher. He has good flexibility and enough speed to turn the corner. His biggest issues are a limited pass rush repertoire and inconsistency off the snap, which is why I rank him behind Perry. Both issues could be remedied with some coaching.

Mercilus burst onto the scene this year with 14.5 sacks but surprisingly looks neither explosive, nor fast, nor strong. What Mercilus does have is length, lots and lots of length. He's also smooth and has great hand use. Put these together and it makes a DE who is very difficult to block.

Mercilus is not a very clean fit for the LEO position due to his lack of explosiveness but we might consider him anyway because of his consistency rushing the passer. Here are some highlights and you can see him against Northwestern here and against Penn State here. Below you can watch him against Arizona State.

Curry is not explosive, he lacks flexibility, and he's slow out of his stance. He seemingly wouldn't offer much at LEO but he plays with such anger and strength that he consistently fights through blocks and generates pressure. Simply put, Curry plays like a beast. He won't be able to dominate OTs at the next level the way he did in college but should still be a very dangerous pass rusher.

Curry has good closing speed but his consistency generating pressure is why he's an attractive option at LEO and his attitude will fit nicely as another physical presence on defense. Here is a nice scouting report. Here are some highlights and you can see him against West Virginia in 2010 here and below in 2011.

Irvin is one of my favorite prospects in this draft class. He is a completely unique player. You'd think that he's too skinny to rush the passer but his remarkable length and hand placement keeps OTs off his body. This allows him to put his speed and explosiveness on display. As a conditional pass rusher he posted 14.5 sacks in 2010. This year they tried to use him as more often on first and second down but it backfired. He uses leverage well which makes him seem strong in bursts but he lacked the bulk to be start every down.

You can see the evidence of this failed experiment here in the first game of the season against Marshall. They started to move him back to the conditional pass rusher role toward the end of the season. You can see him getting his swagger back below against Louisville. He finished 2011 with 7.5 sacks. Here is a scouting report and his 2010 highlights. Even if he needs to rotate a lot, the LEO position might represent Irvin's only possibility to start in the NFL.

I'm a big fan of Jake Bequette. His explosiveness, athleticism, and flexibility turning the corner make him a potentially perfect fit at LEO. Bequette will make plays if given space and a single blocker to rush against. He has a bit more size than Clemons so he might be a legitimate upgrade somewhere down the road. He needs to play with better leverage and develop a greater pass rush repertoire to really be effective.

Watch him here against Texas A&M last year. I also singled out one, two of his three sacks against South Carolina. Here is his first sack against Mississippi State and now watch him perfectly time the snap count on two consecutive snaps here, forcing a fumble on the second. Below you can watch him against Ole Miss this year.

Lindsey is a very good speed rusher. He's maybe not as tall as we'd like but if he can add some bulk then there's still a chance he could develop into a starter at LEO. If not then he'd still be valuable as a conditional pass rusher. Lindsey doesn't have enough strength to bull rush OTs but he has heavy hands and uses them well to separate and slide past an OTs base of power.

He's also explosive off the snap and has enough speed to turn the corner. One of my favorite abilities that Lindsey demonstrates is an aptitude for anticipating the snap count. Lindsey had 8.5 sacks in 2011. You can view his scouting report here and his 2010 TMBDraft analysis here.

McClellin has an excellent motor. He's not outstanding in any one respect but he's all around solid and has a nice build for the LEO spot. He doesn't impress me all that much rushing the edge but looks dangerous on inside moves and especially on stunts. He had 7.0 sacks this season. Here are his 2010 highlights. You can see a nice sack he had against Georgia in the first game of the year here and his sack against Arizona State in their bowl game here. Below you can watch him against New Mexico this year.

Smith has prototypical build, athleticism, explosiveness, and motor to play the LEO position. Unfortunately he explodes out of his stance straight up. This really limits his ability to work past an OT. Smith needs to play with a lower base, develop more active hands, and use his athleticism more to rush the edge. He could be a project pick for us toward the end of the draft.

Donte Moss is the type of athlete who makes Nick Reed go home and curl up with a box of tissues watching The Hot Chick. Moss could have been a borderline first round pick if he had had a good 2011 season. Instead, he had a horrendous season and tore his ACL in their bowl game against Missouri.

He surprised a lot of people when he decided to declare for the draft. He's betting he can play his way onto a roster in 2013. I doubt he'll be drafted but maybe the Seahawks will give him a look because in theory he's a LEO prospect. Below you can watch his 2010 TMBDraft analysis.

Big thanks as usual to DraftBreakdown for the excellent scouting videos they put together. If it wasn't for their hard, unheralded and humble work, we'd be forced to watch those godawful horrible highlight videos with terrible soundtracks all day. So, thanks to Aaron Aloysius, JMPasq, JPDraftJedi, TTN2810, MARI0clp and the whole DraftBreakdown crew.