The Seahawks commit penalties. Lots of them. This was a common narrative in game threads this year, and many articles were written questioning Pete Carroll's coaching style and ability to instill discipline in the troops, etc.

Around these here parts, we've gotten used to disciplined, soft, composed Mike Holmgren teams, so seeing this aggressive, tough and sometimes too intense squad of behemoths has been, in some cases, a breath of fresh air. Starting fullback Mike Robinson pointed out that the Seahawks have been overcoming the perception that they were "soft" and unwilling to "hit for 60 minutes."

However, their youthful mistakes have spawned an epidemic of baldness in the Pacific Northwest as the Twelfth Man has exasperatedly torn handfuls of hair from its collective head, wondering when the team will finally tone down on the penalties.

Our esteemed compatriot Hawkblogger did some good work researching Pete Carroll's past teams to discern a pattern -- are Pete Carroll's teams like Dennis Erickson's? Just notoriously sloppy and undisciplined? Or is something else in play? I would recommend reading both of the above linked pieces before continuing.

Now that we've arrived at the end of the season, we can go back and look at the happy totals. According to TeamRankings.com, the Seahawks ended up a (relative) distant second to the Raiders in total penalties, as the Raiders set the new single-season record with 163 total penalties for 1,358 total penalty yards -- that's an average of 10.2 penalties per game, 8.3 yards per penalty, and 84.9 yards per game. To compare, Seattle had 138 penalties for 1,046 yards -- an average of 8.6 per game (2nd most in the NFL), 7.6 per penalty (3rd least), and 65.4 per game (3rd most).

This season, Indianapolis and Jacksonville ranked in the top 5 most disciplined squads almost across the board, and San Francisco and Dallas ranked in the bottom 5 in most categories. New Orleans allowed the 4th most penalty first downs per game (2.4) -- right behind Seattle's 2.5 -- while Green Bay gave up the second-fewest penalty yards per game, at 37.4.

Most of the other top teams end up with average penalty numbers, so I think it's fairly safe to say that penalty stats are direct predictors of overall team success.

The best site I've found to break down penalties by type and by player is The Football Database. I'm finding a few possible minor discrepancies, so if any of you know of a better resource, feel free to let me know.

Here's how the Seahawks stack up against the rest of the NFL per type of penalty. 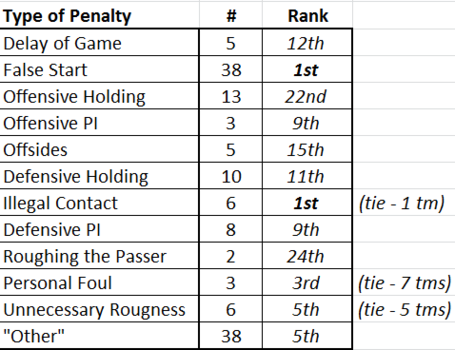 The biggest culprit on the team, as expected, was Brandon Browner, who was tied with Stanford Routt (Raiders CB) for most penalties this season. Both cornerbacks were flagged 17 times. Routt narrowly edged Browner in total penalty yardage, 167 to 165. Richard Sherman ranked 18th in the league with nine penalties for 69 yards (in ten starts), and Robert Gallery came in at 40th, rounding out the Seahawks' top 50 members with eight penalties for 55 yards.

All of this isn't enough for me, though. I want more details. There is obviously a decidedly flawed element in the system -- that is, humans are responsible for observing 22 large humans running around at top speed and determining conclusive results. How many of these penalties were accurately called?

And I'm not even referring to any sort of referee bias. I'm interested to see how much that had an effect, but to be most conclusive about that, I would need to watch every game by every team and determine officiating patterns for every official. And I have more of a life than that. So I don't plan on making many decisive statements on that front, though I may refer to it at times.

Over the next eight or nine weeks, I hope to provide a clearer, more in-depth look at the Seahawks penalty situation this year. I'll go game-by-game and break down each penalty. Hopefully I'll be able to incorporate screenshots and cool drawings and maybe even videos! I'll keep a running tally for each player, each category of penalty, and the legitimacy of the calls.

I have no idea where this study will take us, but I think it'll be enjoyable and eye-opening.

Next up- Week 1: Seattle Seahawks vs San Francisco 49ers