Analyzing players is an extremely context-sensitive occupation. It's much harder to analyze players on other teams because of that, as you have to establish the system and level of play around him prior to be able to isolate his performance to any meaningful extent. Obviously, you can never isolate it fully, no matter how well you understand the system, but it only becomes harder as your familiarity with the surrounding talent/system lessens. That's not just true for me as an amateur, it's true for the pros as well.

That's what makes players like Matt Flynn so hard to scout, and adds to them being risky propositions. Not just is he playing in a fairly high-powered if imperfect offense (weak run game, not very good pass-blocking), but he's playing against two defenses with very weak, exploitable secondaries. When you look at his starts, you can identify certain tendencies, strengths and weaknesses, but because you have so little to work with that it becomes very hard to precisely peg them. For instance, if a quarterback stands strong in the face of rush and delivers a ball, you talk about pocket poise. But then, a few plays later, he plants, keeps patting the ball like a dork, doesn't feel the rush and gets sacked, and then you talk about lack of awareness. It's not until you have watched a player start more games against very different teams that you can really identify which assessment is more accurate.

I don't like scouting out preseason tape. It makes it even more difficult to isolate performances as individuals play among or against second or third-stringers. In the case of Matt Flynn, it's just necessary to bring in this tape as his two starts don't provide enough. I could bring up some of his mop-up duty work, but that can be even more deceiving than preseason tape. So here we go. I glanced over the Seahawks tape (week 2 of 2010 preseason), but I'm primarily looking at week 1, 2 and 4 of this year's preseason (at Cleveland, hosting Arizona and hosting KC). In those games, he went 11-18 for 126 and 1 TD, 5-6 for 141 yards and 1 TD, and 2-10 for 12 yards and a pick. Statistically, a good, a great and an awful performance, albeit on very few attempts.

This is Flynn's first snap in the game. He looks downfield, sees Swain and guns it for 21 yards. And unlike his deep passes in the Patriots game, this one is gunned, which is good. What is less good is Flynn kind of hops around in the backfield while reading. That an his incessant habit to pat the ball are not good mechanical habits, but they are fairly typical for young quarterbacks, and not really worrisome.

Ah, the good times we had, Nick Reed.

Wilson has a huge cushion on Nelson, who turns at about the 10, and then has to come back to the 7 for the pass. Not the ideal pass, considering the opportunity. 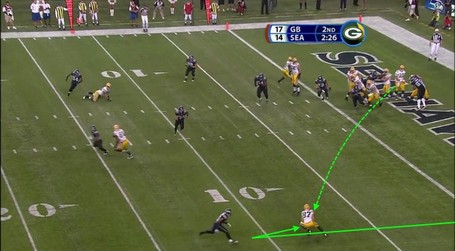 Flynn is playing one drive against the Browns defensive starters. He sees the safety moving into the box and audibles to his TEs and RB.

Flynn drops back with a good pocket, and throws deep for Jordy Nelson, but he overthrows it out of bounds. Such overthrows made by the "weak-armed" are usually followed by shouts of "haha, overthrown by (...)!" I remember this well from our Hasselbeck days. But a "strong arm" is not just about the ability to sling it far, it's about the ability to release a ball with velocity and accuracy deep downfield, preferably without needing to set your feet and wind up. This is an ability Flynn lacks, and this kind of overthrow just displays that erratic deep accuracy.

The Browns defense rush five, plus a linebacker on a delayed blitz.

Flynn maintains his poise and passes to Jones, who is coming back near the sideline. 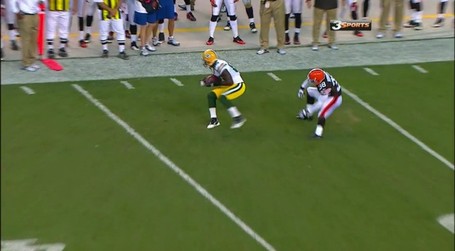 The ball is a little low, but Jones adjusts and still gets a good chunk for extra yardage out of it.

The play before, Flynn threw a risky ball down the middle into double coverage. The Browns throw the same look at the Packers, with a lot of bodies in the middle but the corners singled out in man outside and the linebackers drawn into the middle in man coverage on tight ends. This completely opens up perimeter runs, and that's what Flynn does, after narrowly escaping Browns DT Schaefering.

Flynn in the shotgun with splitbacks, with the Browns are again showing blitz. They rush six, but the Packers pick it up well. Cobb releases from the slot with DeAngelo Smith on very tight coverage. Flynn has enough time and throws a ball with nice zip just outside of Smith's reach and inside Cobb's. Not any easy reception, but a nice throw. 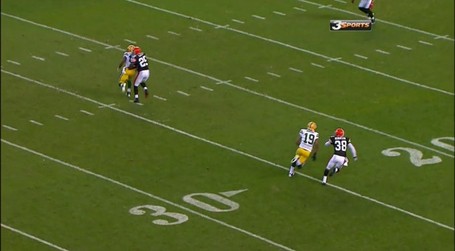 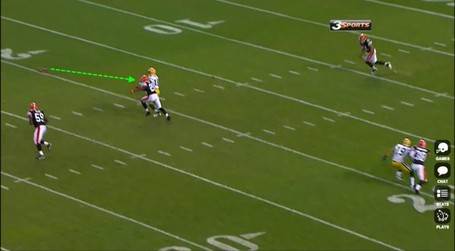 The pocket collapses twice, for a sack (for 0 yards) and an incomplete (which should've been intentional grounding). Browns again blitz, six this time. Flynn again shows excellent poise with a heavy blitz on the middle, and zips it down the middle to a crossing Cobb. Flynn is hit as he throws, and to be willing to stand like that after two instances of the pocket collapsing completely is pretty good.

Yip, a third one down the middle. I just want to highlight these things because it's always relevant to compare a player to the one he would replace. Matt Flynn absolutely uses all of the field. Tarvaris Jackson? Well, here's where we rank in attempts to different parts of the field: short left 27th, deep left 24th, short middle 30th, deep middle 15th, short right 6th, deep right 5th. That makes you so much easier to defend against.

Browns blitz again (5 this times). They're obviously just testing out schemes, since it's the preseason, but this game's a good case study for why blitzing is rarely an answer to defensive woes. Especially in this case, as Flynn is pretty damn good at dissecting one on ones. On this play, the Browns allowed a big cushion on Cobb while the man closely covering Cobb obviously shows blitz, cheating inside (and Cobb appears to point this out to Flynn prior to the snap, though I'm not sure Flynn picked up his signal). The throw goes for about 10, and Cobb does the rest.

Randall Cobb has all the makings of a beast. Stop accruing so much talent, Green Bay, it's unfair.

The Browns are making it a little easy on Flynn. Their pressure look is rather obvious, with one-on-one on the outside, though the Browns rush only four. The last play, Flynn went to Diondre Borel on the left, who dropped it. After identifying the defensive look, Flynn signals for the backfade near the line to Borel. Borel is in isolation on the right, Flynn immediately looks his way and completes. Excellent, if somewhat obvious, pre-snap adjustment.

Packers go four wide on 1st and goal at the 3. Flynn signals a route adjustment to his left and reads it there, but his man in the slot is moved into double coverage. 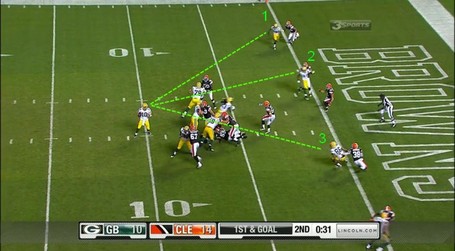 Flynn progresses as numbered above, and throws it to Gurley at about the one. The coverage is good and the pass is broken up. It arrives in Havner's arms by pure luck. 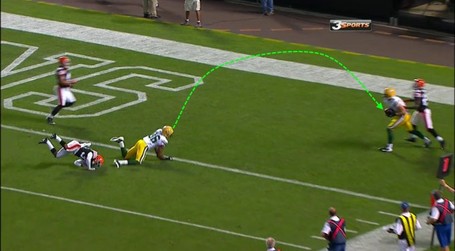 Arizona terrorized Green Bay offensive line all day, even more so than the Browns did the week before. That was pretty typical this preseason, and it means this game has less value to scout out, since so much of it is "offensive line flat-out beat, Flynn can't do anything about that", and I'm not scouting the Packers second-team offensive line. Still, this is a typical young quarterback play. Flynn drops back. Pats the ball. Pats the ball again. Doesn't step up, and the ball is swatted out of his hands by Schofeild. 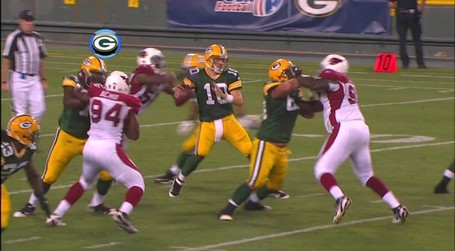 The Packers are backed up into their own endzone after a penalty on a punt return. They're in a two-wide scheme and the Cardinals are sniffing out a run, with both safeties playing very close to the box. West release in a go route, and Flynn puts it perfectly in stride at around the 15-yard line. Lead his receiver well, and West is free the rest of the way. Great playcall, bad defense, and good execution does the rest. 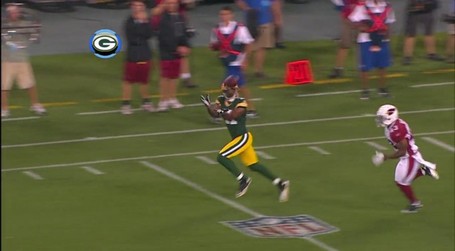 Packers in three wide, Flynn reads to his right and sees Gurley and Flowers in isolation. He throws it up there, utilizing Gurley's impressive reach to put it where the receiver can get to it but Flowers can not. The ball placement is pretty good on this long pass, especially for Flynn. 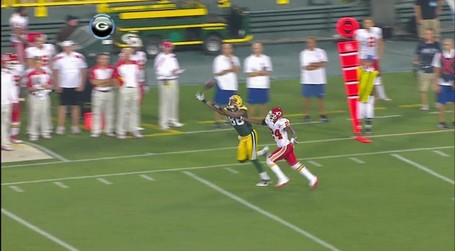 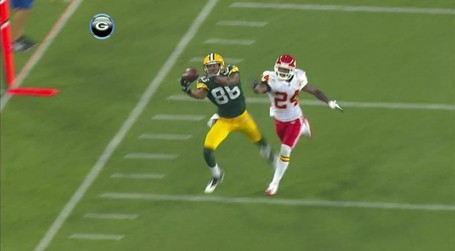 It's incomplete because Gurley doesn't maintain control before stepping out of bounds, partially due to the ball leading too far outside, but that doesn't negate that this is a good play.

Bad awareness by Flynn here, he's throwing it over the middle to Williams, who looks free underneath, but Berry has great positioning, and makes a clean play for the ball, nearly getting the interception. He's flagged for unnecessary roughness as he collides with Williams while trying to reach for the ball. 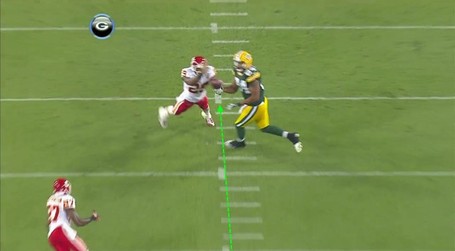 Packers in three wide, with the tight end releasing. Flowers is isolated on the outside of Gurney, who is crossing the middle, and Flynn reads it right, but the ball placement isn't good, leading the receiver too far. Not an easy interception, but Flowers gets it. This could be miscommunication on Gurley's route, but it looks more like he's leading the receiver too far. Not a mistake Flynn makes often on shorter throws. 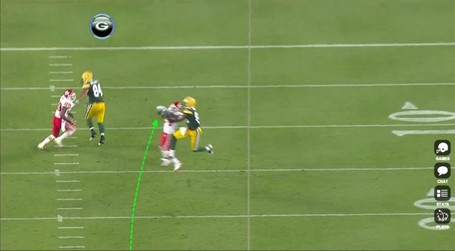 Chiefs rush five. Chastin West (#11) looks pretty open (he turns to block on the stills below) but Flynn doesn't have time to set and throw. Hali gets a hand on him as he runs into the wide-open space to his left. What impresses about Flynn as a scrambler is not his athleticism, which is middling, but his smarts in identifying when to try to run or when to slide and re-set for the pass. He tends to run when defenders have been drawn out of an area, and he has the speed to outrun linemen for good gains, like this one. 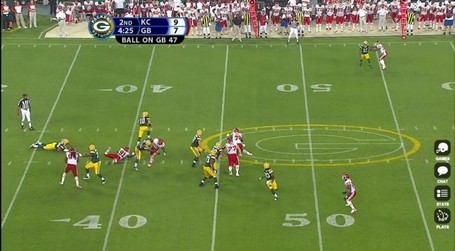 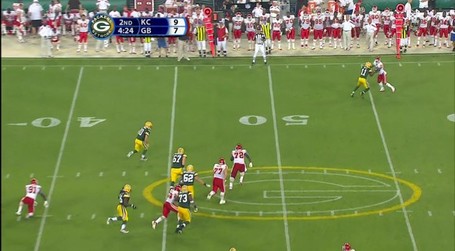