Bobby Wagner with that sideline-to-sideline speed

Sideline-to-sideline speed at linebacker makes up for compromised gaps.

Share All sharing options for: Bobby Wagner with that sideline-to-sideline speed

I wrote an article earlier, during the offseason, breaking down the importance of 'sideline to sideline speed' at the linebacker position for the Seahawks. The way Seattle plays with so much size on their defensive line - last year more than this year, maybe - it dictated that the big bodies in the middle were there to hold the point of attack, prevent penetration up the middle, and hopefully hold contain to keep the quarterback in the pocket.

Seattle was stout last year against the run early on, but as teams began gameplanning against Seattle's weaknesses, they started getting things out on the edges more, and opposing teams with some speed at running back were able to pick up chunks of yards by stretching the Seattle defense toward the sidelines. Red Bryant isn't going to track down many speedsters that manage to get the corner on him, so Seattle's linebackers were often left to clean up the mess -- often the middle linebacker that was assigned coverage duties on the QB scrambling or running back on a delayed draw play.

All too often though, we saw that once the pocket failed, plays broke down and gaps were compromised for the Seattle defenders, QBs and/or ball carriers out of the backfield were able to get yardage by attacking the lack of speed on the defensive front-seven. David Hawthorne is not a speedster, and with Leroy Hill or K.J. Wright out in zone coverage or blitzing to the wrong side, one small weakness for the Seahawks defense that began to show up was their inability to close on runners (either a scrambling QB or a cut-back running back) once they'd gotten past the wall of Red Bryant, Brandon Mebane, and Alan Branch.

One example that I broke down -- a simple end-around by the Ravens, exposed the lack of make-up speed from the middle linebacker position -- not something that can be exploited on every play, but something the Seahawks certainly had in mind as something to consider. This defense, generally, isn't exotic or wildly schemed -- it's about maintaining gaps and discipline, but when gaps are inevitably compromised, it's essential speed and power are there to compensate.

As a result, one of the main things that the Seahawks' front office talked about upgrading over this offseason was 'team speed,' particularly at the linebacker position. David Hawthorne, for all his savvy and leadership and veteranosity and all that, wasn't offered a big contract and ultimately left to take a better deal with the Saints. Before him, Lofa Tatupu was allowed to leave after he declined a large pay cut. The one main thing these two former Seahawk linebackers had in common was a lack of top-end speed (to put it kindly). Bobby Wagner was targeted for many reasons -- he's good at shedding blocks, he's instinctual in zones, he's a strong tackler -- but above the rest was his speed and acceleration. That's shown up a good amount already this season -- he had a few great tackles for a loss in the backfield against the Rams and Wagner collected 1.5 sacks on Sunday against the Panthers.

Oh, and by the way -- Bobby Wagner is now playing in all the defensive sub-packages -- nickel, dime, you name it. Wagner played 56% of Seattle's snaps against St. Louis in Week 4, then 100% of Seattle's 55 snaps against Carolina in Week 5, and much like K.J. Wright's quick ascension to garnering complete trust by this coaching staff, after four weeks, Wagner and Wright are playing nearly every snap together as the Seahawks' linebackers, and it only broadens what Gus Bradley and Pete Carroll can do with their schematics.

I wanted to break down one play from Sunday that exhibits what I've been talking about with regard to sideline-to-sideline speed and 'making up' for compromised gaps, because Wagner's closing speed saves what would have been, most likely, a huge gain against this defense last season. Let's take a look.

Carolina in 3rd and 7 here at their own 46 yard line, trying to string together some gains in their third drive of the game. The Seahawks are in their nickel package (5 defensive backs), and have some interesting line splits going on.

Going from left to right below, you'll see Chris Clemons in his wide-9 alignment, and a full ten feet over from him, you'll see Alan Branch at the 1-technique spot toward the weakside. Down the line even further you'll see Jason Jones and Bruce Irvin bunched closely together, both outside the right tackle. Off Irvin's shoulder is K.J. Wright. In a play that vaguely resembles the stunt-twist strip-sack by Bruce Irvin that Josh Kasparek broke down the other day, Alan Branch is going to barrell into the RG at the snap, allowing Jason Jones to stunt underneath him and try to find a lane to the QB. Bruce Irvin will rush to the outside, with K.J. Wright stunting underneath him through the B-gap (which Jonathan Stewart will pick up).

On the offensive left side, Bobby Wagner and Chris Clemons will attempt the same type of stunt.

So, six pass-rushers employing three stunts on 3rd down, with single-high safety, underneath man coverage. Maybe I spoke too soon about the Seahawks not using exotic schemes. 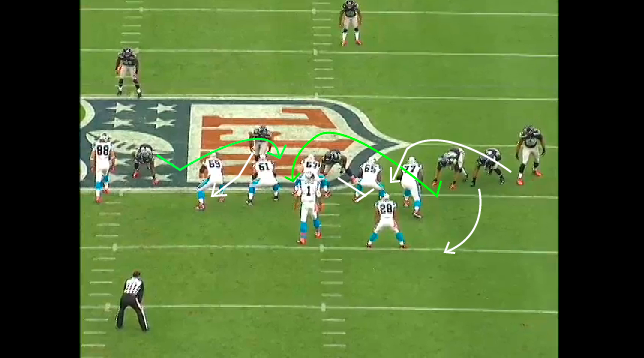 Ball is snapped, the plan goes into action. You see the three stunts start - Clemons to the left, Jones in the middle, and Wright on the right. 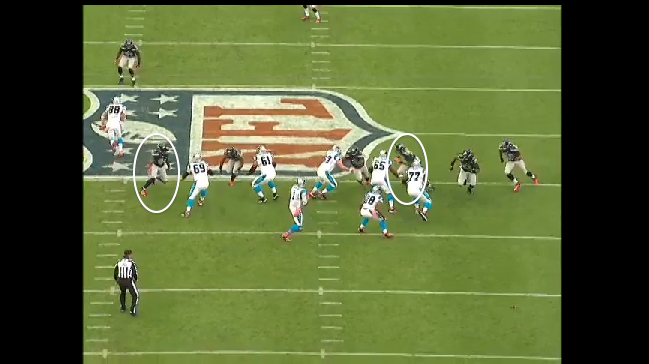 Over the top -- Brandon Browner, Marcus Trufant, Richard Sherman, and Kam Chancellor are in man-coverage, leaving Earl Thomas patrolling the deep middle of the field. 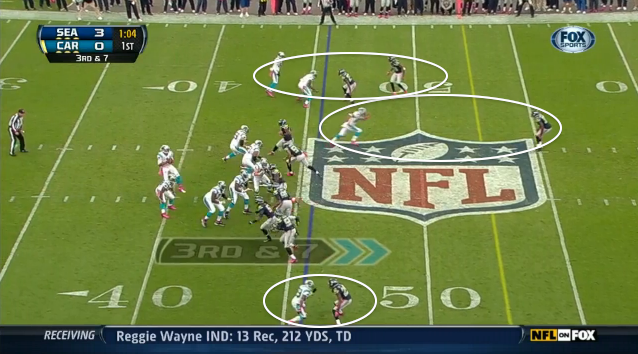 For Carolina's part, they do a decent job stemming the onslaught, but can only hold for so long. As Cam pulls down what would look to be his first read to the left, the pressure starts closing in. 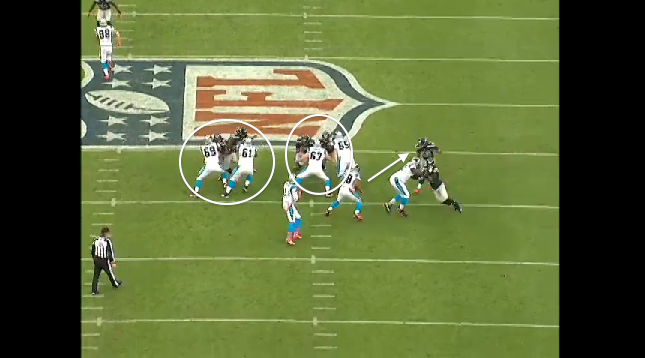 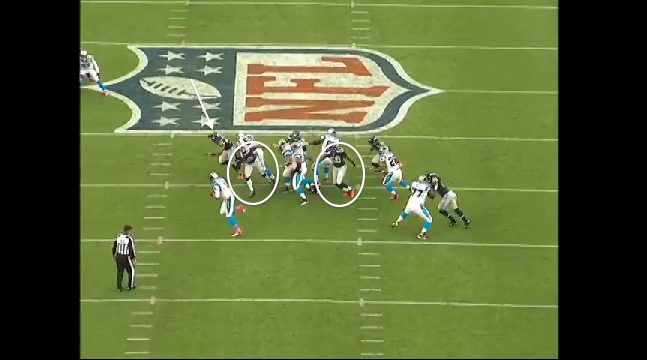 Jones and Wright break through (above), but Cam Newton is a gazelle -- he takes off running to the left, with plenty of green space downfield to that side.

You can see below that Chancellor and Trufant are in man and this leaves the underneath zone mostly vacated. Browner must stick with his man until Newton crosses the line of scrimmage for fear that a pass could be lofted on the run.

Essentially, this leaves Bobby Wagner, seen below getting off a block to his side, as the only Seahawk between Newton and probably 10-15, maybe more like 30, yards of open field. This is the type of play -- where original scheming has broken down and the quarterback gets out of the pocket, in which the Seahawks were gashed in at times last season. 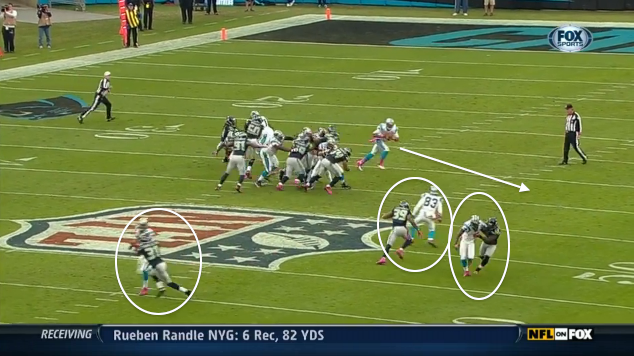 Not many players are going to catch Cam Newton in the open field like this, but Bobby Wagner does a brilliant job of cutting off Newton's angle and making a tough tackle. 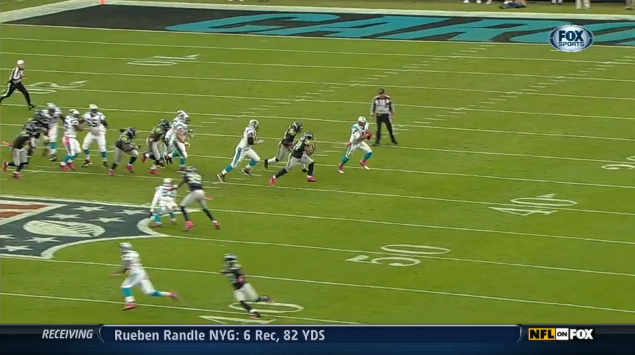 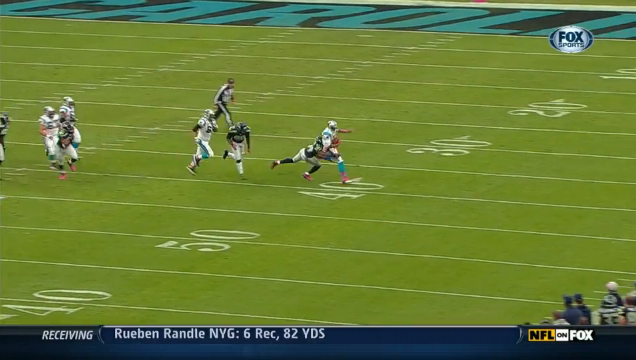 Quoting what I wrote back in July -

This sideline-to-sideline speed that you'll hear people talk about is what could make Bobby Wagner a special player. He's lauded for his ability to get off of blocks, run in coverage, and read plays, but his closing speed should allow him to make plays in space where you must break down and tackle or chase down an offensive ballcarrier.

Another factor at play here is that often you'll see a quarterback get flushed from the pocket against the Seahawks, and far too frequently, those quarterbacks were able to scramble for ten yards in front of the tightly-covered receivers in the secondary.

Not in this case. Love it.