Those of you that read this blog regularly know that both Thomas Beekers and I have a ton of respect for the analysis of NFL Films' senior producer, ESPN's NFL Matchup's executive producer, and The Games the Changed the Games' co-author, Greg Cosell. Now, let's be clear -- what Cosell opines is certainly not gospel, and he'd be the first to say that he's often wrong (and he is, sometimes, and that's fine). But, regardless of how much stock you put into his opinion on certain players, I believe he's laid out, better than anyone else analyzing the game, in simple terms -- the attributes necessary to play quarterback at a high level, consistently, in the NFL today.

So, if you're wondering why I constantly cite Greg Cosell, and why I'll continue to do so, it's not because I take his opinions as fact or spout them off when they confirm what I believe, it's because I believe his process is second to none.

Extensive, exhaustive tape study that identifies player traits and characteristics that exist in the physical world. Not 'he's a winner,' 'he just finds a way;' no talk of the 'clutch gene' or the 'it factor.' No bold, controversial pot-stirring statements or attention grabbing predictions, nor calls to bench players or fire coaches. Somehow, someway, he's still employed. Crazy, I know.

For quarterback play, the attributes that he will consistently check off are: quick progression reading, quick decision making, timing, anticipation and accuracy. Another attribute that separates high level quarterback play in big games and critical moments, he'll say, is the willingness to make stick throws into small windows.

Quoth Cosell, "All these traits are visible and discernible on film. They are some of the subtleties of quarterback play, the nuances demanded at the NFL level. It's a highly disciplined craft. Critical moments in big games are not defined by random and arbitrary play. It's tangible and quantifiable skills that most often produce the memorable plays."

Cosell hasn't yet weighed in on Russell Wilson's play from yesterday's game against the Patriots, and it's also worth noting that he hasn't exactly been high on Wilson's play thus far this season. "The Seahawks are clearly hiding their quarterback," he's said, or "At this point, Wilson is a very limited player."

In fact, in a podcast with Doug Farrar last week, Cosell was almost flippant in describing the bad things he's heard about Russell Wilson from his circle of acquaintances - which includes analysts, coaches, scouts and GMs. So, this post isn't about how much Greg Cosell loves Russell Wilson, because, really, at this point, I think he's been more critical of him than complimentary. What this post is about is trying to identify 'visible and discernible' traits on film that can tell us more about Russell Wilson's prospects as a pro quarterback.

One of the main things that stood out to me in this game was Russell Wilson's accuracy. He completed six passes of 20 or more yards - and the key to each and every one of those plays was that he placed the ball almost exactly where it needed to be.

A downfield strike to Doug Baldwin as Russell drifted left out of the pocket -- reminiscent of a great Tarvaris Jackson pass (actually, maybe his best pass as a Seahawk) to Doug Baldwin last season against the Ravens. After the play broke down, Wilson hit Balwin streaking up the middle, out of reach of the defensive player and perfectly in-stride for Doug to reel it in.

Another pass to Baldwin - a touchdown - was on the money -- up high for Doug Baldwin to catch in the endzone -- out of the reach of the DB and in the only place that Doug could have free rights to it.

Another - right into Golden Tate's breadbasket 40 something yards downfield, dropped in in front of the defensive back playing deep but deep enough to hit Tate in stride. He dropped the ball in exactly where it needed to be.

Another touchdown pass - on a dime, over 50 yards downfield to Sidney Rice after Rice had beaten deep coverage -- he hit Rice in stride perfectly, with enough loft and the perfect trajectory to hit his receiver as he stepped past the goal-line.

Wilson went 16 of 27 for 10.85 yards per attempt and - from what I remember - no terribly high passes, especially over the middle, which is an improvement. He had a few balls thrown a bit behind his receivers - Sidney Rice fell down going to get one, he had one ball tipped at the LOS that everyone was awesomely joking was a "bounce pass," he threw the ball away on an aborted screen play, he missed Braylon Edwards on an out-route, Sidney Rice had one go through his hands, and he had a couple over-throws out of bounds on deep fade routes to Golden Tate. But, no QB is going to be perfectly accurate on every throw, obviously - not even Drew Brees, who's been at this game for 12 years. He'd want some passes back I'm sure - but the key for me has been improvement, and on a rainy, blustery Pacific Northwest day, Russell Wilson impressed me in that regard.

Quoting Cosell again: "The most overlooked characteristic when discussing quarterbacks is accuracy. The better term is ball location. Think back to Ben Roethlisberger's throw against the Cardinals to win Super Bowl 43. The ball was placed in the only spot that could have produced a completion. It cleared the outstretched hand of Arizona's Ralph Brown by no more than 3 inches. It was not Big Ben "making a play," as many like to declare when discussing Roethlisberger's abilities. Rather, it was the product of a particular and identifiable trait - accuracy - that can be quantified and analyzed."

The play that I wanted to break down wasn't of as much importance as the Ben Roethlisberger completion to Santonio Holmes in the Super Bowl, but to me, it illustrated a 'particular and identifiable trait' for Russell Wilson that I believe improved in this game - accuracy.

Also, this article and play breakdown, complete with Greg Cosell's quarterback trait analysis, is a follow up to a article I wrote a couple months back, an article which broke down a very similar throw that Wilson in the preseason against Kansas City. It was a throw that Cosell was impressed with, and which he brought up to Doug Farrar on a preseason podcast: A seam route up the middle to Anthony McCoy, just over the outstretched arms of a Chief linebacker.

Cosell said at the time of Wilson's play, three preseason games in, "There are always specific things that I look for, and there were a couple of plays that really stood out to me [against Kansas City].

"He had a completion to [Anthony] McCoy, it was a great throw in the 2-minute offense [to end the first half], and it came against man-free, for 22 yards. I thought that was a terrific throw; he actually looked left because he had the X-iso on his left, and he didn't have it, and he came right back to McCoy in the middle of the field.

"It was a very tight throw, and that's an NFL throw. Overall, what really stands out to me about Wilson, which is essential if he's to be an NFL starter, he's very decisive with his reads and throws, so he does not hold the ball very long. The concern, when you're 5'10 and a half, is that the pass rush gets too close to you and then you can't see. He's been extremely decisive in the preseason, and that's all you can judge by. I don't think anyone can sit here and say 'this guy's going to be a great NFL quarterback.' No one knows that. I've watched the three games - that's what shows up on film."

Now, in the NFL regular season, things have changed significantly for Wilson and really, that was to be expected. The game speeds up, the players get bigger and better, and the pressure is magnified, the schemes more difficult and the reads more complex. The things that Wilson did to win the job outright in the preseason hadn't really shown up consistently over the first five games for the rookie: he's been more indecisive, more conservative, less accurate, and less dynamic than he was in the preseason. Is this a surprise? Not really - though the drop-off has been startling for many. This is likely a function of the offense's design via Pete Carroll and Wilson's deficiencies as a young, inexperienced player.

However, I thought that Wilson had his best game as a pro this week, and it was largely because he was decisive throwing from the pocket. As Mike Sando points out, Wilson went 12-20 for 206 yds, with 2 touchdowns and no picks from inside pocket against New England, while going 4-7 for 87 yards with a touchdown to Doug Baldwin outside of it.

Below, Seahawks driving after Russell Wilson hits Sidney Rice for 29 yards up the sideline. Darrell Bevell keeps the pedal down here and dials up an outside seam route look to Zach Miller. Russell threads the needle for a 22-yard completion.

Sidney Rice is going to run a 9-route up the sideline, and Golden Tate is going to slant underneath Zach Miller's route. Zach Miller will run a nice wheel route that gets #55 Brandon Spikes' head turned around, just long enough for Wilson to pull the trigger. 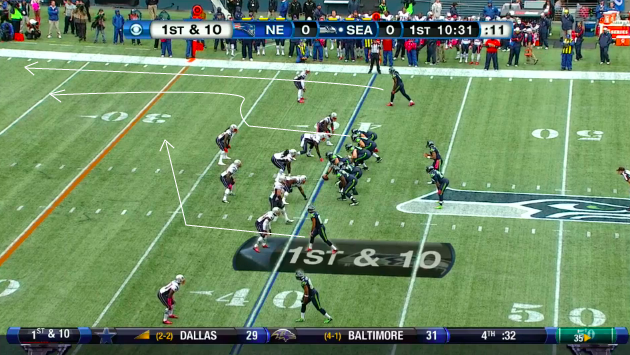 Ball is snapped - the protection holds up on the right, a nice job by Breno Giacomini to contain the rush to that side. You can see below that Miller has his head turned back toward the ball, selling the double move well. Right after the frame below, he turns his head and runs downfield. 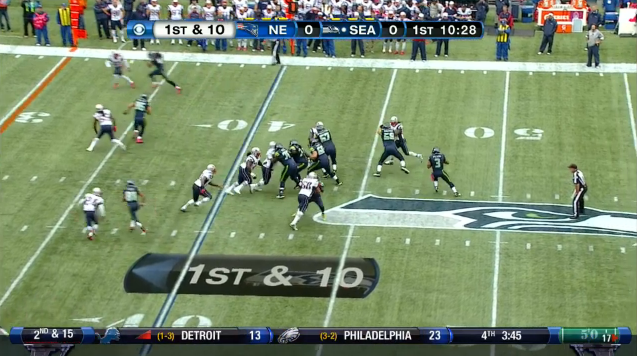 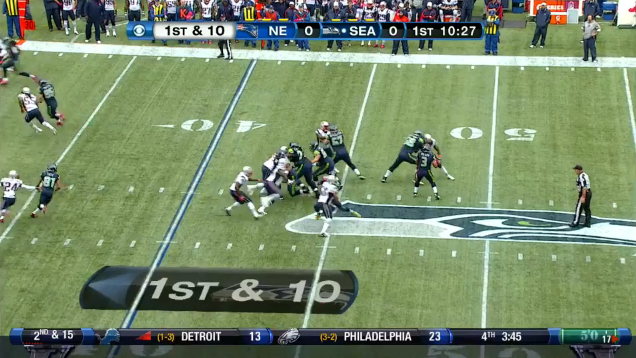 Above, you can see Spikes following Miller downfield and he's actually in Miller's hip pocket fairly well. The one advantage that Miller and Wilson have though is that he's not yet looking for the football. Seeing the back of Spikes' jersey is Wilson's cue to throw it and he pulls the trigger after hitching up once (removing that hitch is something to work on too). 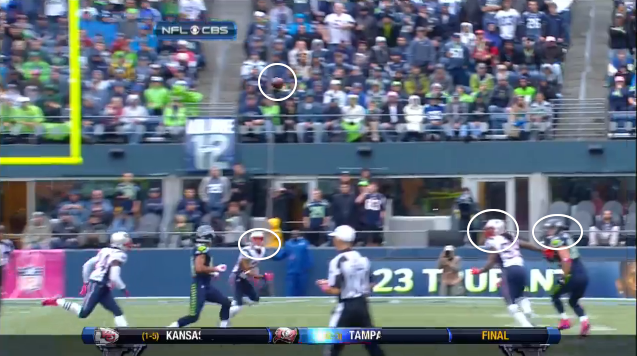 You can see the ball in the air above -- two New England defenders now have eyes on it and prepare to break up the play, but Wilson puts the ball where Zach Miller, and only Zach Miller, can get to it. 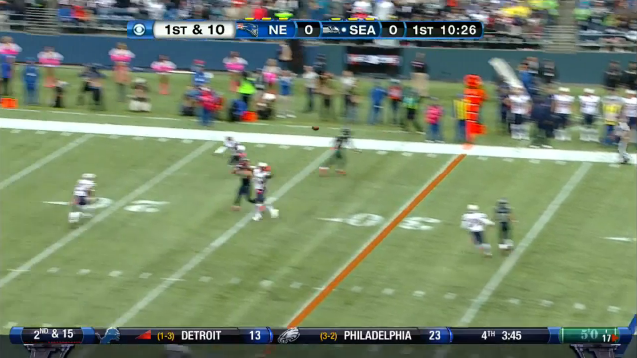 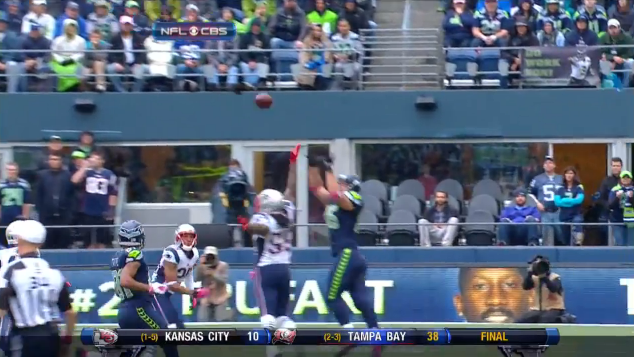 That is ball location. 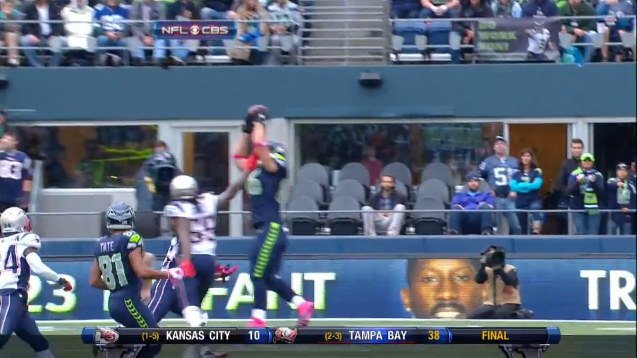 A hell of a throw, and a gutsy decision by Russell to pull the trigger into such a tight space. Some people will criticize the decision to throw into what looks likes great coverage, but this is the type of throw that top arm talents like Aaron Rodgers, Drew Brees, and Matthew Stafford make on a game-to-game basis. The willingness (and success after doing so) to make throws like this is what separates marginal QBs from the good ones.

Read the defense quickly. There's Spikes' backside. No room for error. Trust in your receiver. Pull the trigger. Put it where only Zach can get it.

That's just one small example and I'm certainly not anointing Wilson as anything. As we all know -- he misses some passes and the Seahawks' air attack is probably still at the bottom of the NFL. Also applicable in this analysis is that New England's pass defense is near the bottom of the NFL as well. So, obviously, let's not put the cart before the horse. He's a developing player.

This was just one play, used as an attempt to separate the play of the quarterback from all the related variables, and it shows an example of the type of accuracy (ball location) that Wilson will need to master to become a viable NFL starter.