"When you talk about finishing, you gotta believe, you got to have in your heart to do it right." - Pete Carroll

The strange thing about momentum is that it never really does anything. A team could have all the momentum they need, all the aura, all the energy and drive they could possibly generate and still end up with nothing. More often than not, momentum probably leads into something positive or beneficial, but it can swing just as easily for you as for the other team. How many times did we already see the Seahawks driving all the way down to the opponent's red zone this season only to end up with a field goal or worse, a turnover?

With 3:02 left to go for the fourth quarter on Sunday, momentum swung towards the Patriots. Just 54 seconds prior to that, their opponent, the Seahawks, came up empty handed in getting what would be a potential last drive on offense. Field position wise, they were only nine yards away from midfield. They were up by only six points, but everything seemed to be going their way: Tom Brady had 380 passing yards and was showing no signs of stopping, along with his trio of receivers in Wes Welker, Aaron Hernandez and Rob Gronkowski. The running game had started gashing the Seahawks' defense for large gains under rushes by Steven Ridley and Danny Woodhead. Seattle looked tired, frustrated, and New England was ready to have their heels to Seattle's throat, ready to find extinguish whatever hope 60,000 plus people had left in their hearts.

They wouldn't get that chance.

Brady snaps the ball on a quick count. The OL gets a quick initial push on the Seahawks, but Brandon Mebane is quicker, penetrating the LOS and coming in hard towards Ridley's right. Alan Branch also manages to fight off his blocker, stifling an arm towards him and pushing the guard back into the fullback Conolly.

Even further to the right is big Red Bryant, who manhandles Gronkowski and the LT Nate Solder, and even farther away is K.J. Wright with the outside contain. Ridley stretches the play as far left as he could before being tripped up by his own guys and Mebane from behind. Behind the frantic cheers of the crowd, Pete takes a timeout to stop the clock. 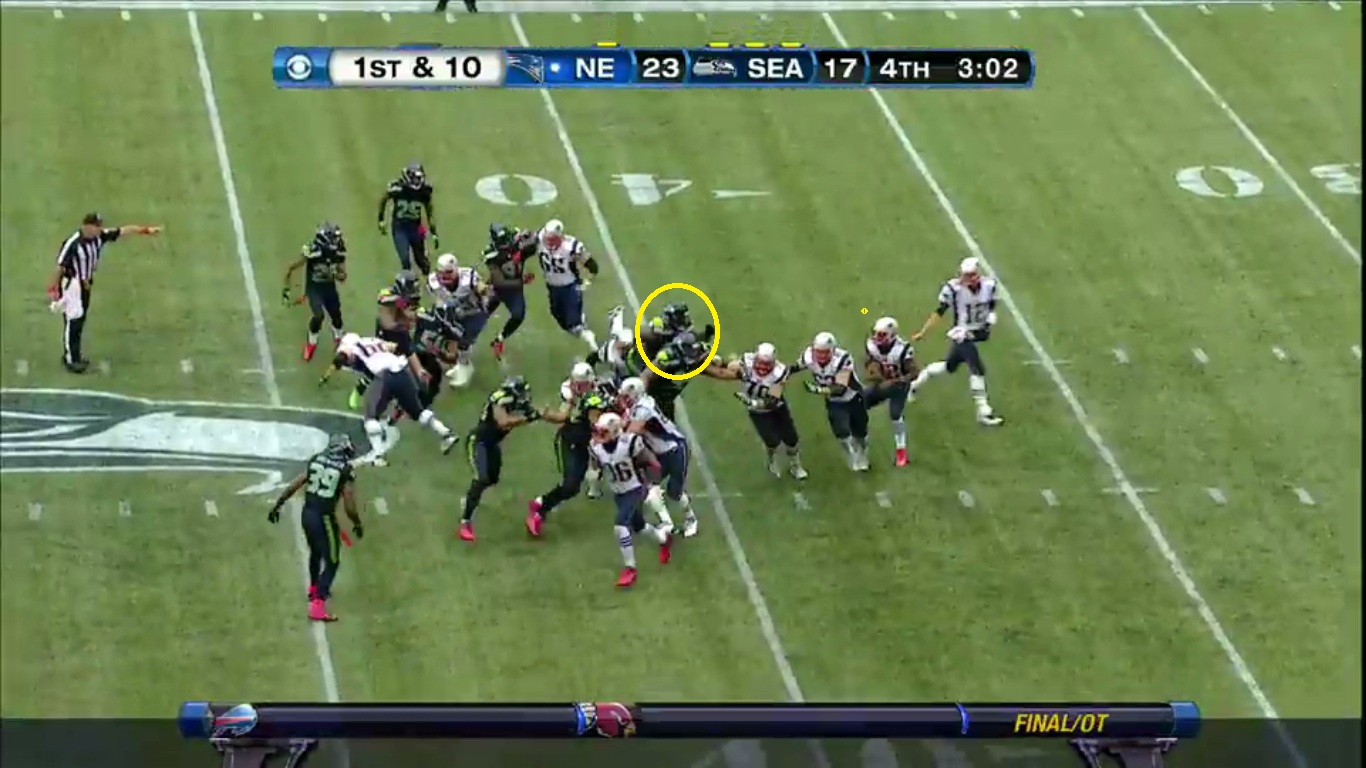 Common football logic dictates that in a situation like this, one should run the clock out and keep it running by rushing for first downs again and again. As mind-bewildering and curious Bill Belichick is, he's not so cutting edge as to stray far away from traditionalism in this case. Run the ball, get the first down, repeat, seal the game.

Brady kicks his leg and motions the TE Daniel Fells across the formation. It's a 23 (2RB, 3TE) Goal Line personnel group, and the Seahawks respond by stacking 9 men in the box.

Mebane again blocks ahead of the guard's block, forcing him to turn his shoulder and push Mebane towards the play. Behind him, Leroy Hill, Bobby Wagner, K.J. Wright and Earl Thomas all begin to stride towards the edge, just in time for Hill to meet the FB at the hole. Kam Chancellor, lined up on the TE, creates separation between him and Fells and again seals off the outside edge on the right.

Ridley sees a hole and begins to charge. Wagner sees Ridley, sheds the LG's block and dives, knocking him down for a one yard gain.

The Patriots may need to run the ball, but they also need to get the first down first. They need to keep possession, they need to keep going. For 11 years, Tom Brady has kept the Patriots going. A "magician" in the backfield, Brady has converted 20 first downs in the game alone. Could he come up with a crucial number 21?

The Patriots break out of the huddle just as the loud cries and cheers of the 12th man once again. Hands pointing. Banging. Shaking. Waving. Hoping.

The Defense rushes four. Scruggs, Jones, Clemons, Irvin. Wes Welker, the man who had converted so many third downs before, runs a hard slant right behind Wagner and in front of Marcus Turfant. Gronkowski, the man who had saved Tom Brady from bad throws and a mismatch towards everybody on the field, is nowhere to be seen.

Meanwhile, Jones and Scruggs run a stunt, faking the pinch and forcing the Patriots' center and right guard towards each other. On the ends, Irvin beats the right tackle Vollmer but ends up overpursuing, just an inch away from getting hand on Brady's shoulder. Clemons is tasked with a double team and effectifvely leashed from a mad rush towards the Brady. With plenty of time but the pocket shrinking, Brady throws.

The ball drifts low towards the ground in the direction of WR Deion Branch. He dives, hands outstretched. On top of him is Browner, who is just as close to the ball as Branch is. He slams into him, effectively ending the play as the ball skips away from both players. Incomplete. The fans roar in approval. 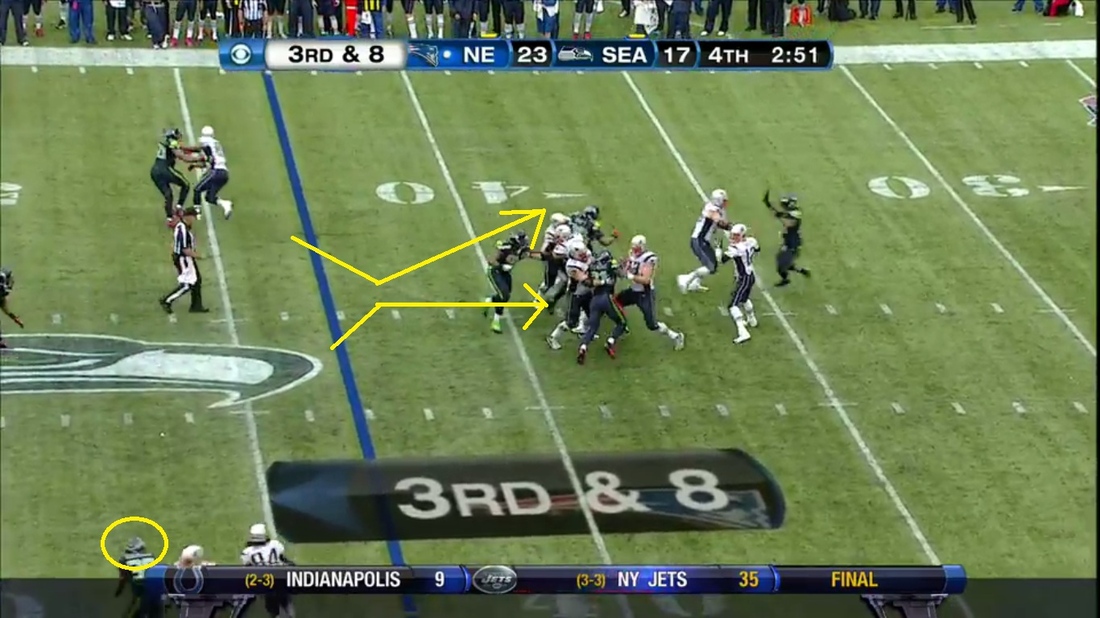 Punter Zoltan Mesko, who probably hasn't been working for a while, boots the ball up. Likewise, the Patriots punt team, who probably have seen the field just as much as Mesko himself, lines up in coverage. Returner Leon Washington, who has been returning punts for a while, catches, stomps his foot on the ground and runs towards the left sideline. A Patriots tackler dives for his legs. He misses. Two others come towards Leon's way but is forced to avoid their teammate down on the ground. Two Seahawks are in front of him paving the field green. It is only after 25 yards does Chris Maragos's push on a white jersey that forces him out of bounds.

Seattle gets the ball back with 2:38 left in the quarter, momentum at their backs. The stadium gradually quiets from cheers and waits in eager anticipation.

On their own 43 yard line, the Seahawks line up in a shotgun formation, 11 personnel. Zach Miller motions across the formation. Ball is snapped. Lynch immediately runs to takes the handoff, taking with him both the weakside and middle linebackers. Wilson draws his arms in a circular motion and tucks the ball in his arms. The fake has drawn half of the defense to motion away from him, and only one man, the strongside linebacker Brandon Spikes, is uncovered. One-on-one.

Wilson runs on a straight curve before his athleticism carries himself towards the sideline. Spikes, as athletic as he is, is beaten by this little nudge. This indicates that Wilson can safely turn upfield, which he does before sliding safely towards the first down marker. Russell Wilson may not be a running quarterback, but it doesn't mean he can't run. 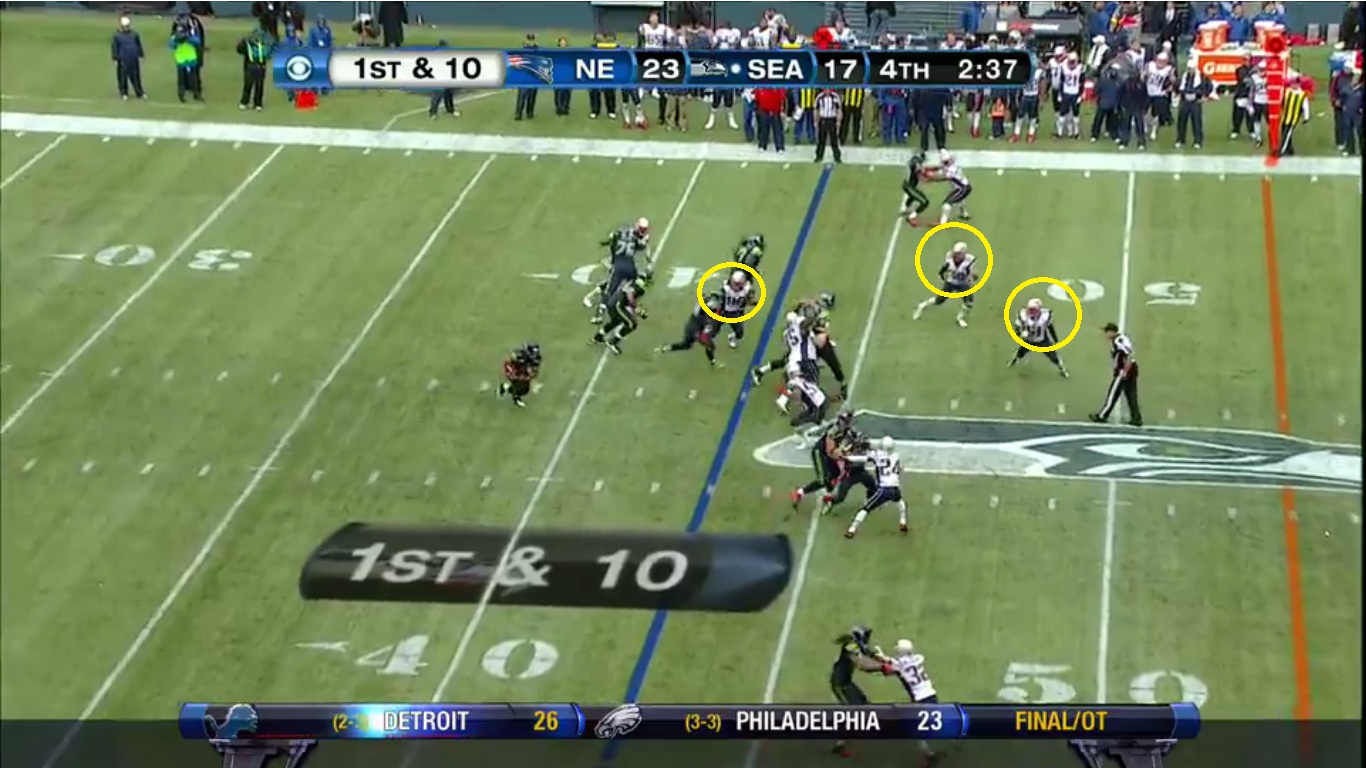 Singleback formation, strength right. Miller motions again. Wilson draws out to his left, right hand outstretched with the ball for Lynch. This fake is less convincing, but it still manages to force the Patriots to hesitate with their initial rush. The pocket is wide and clean, with all four of the Patriot's rushers negated and stopped. Wilson continues to his right even more, before stepping up and launching a dart towards Sidney Rice, in between no-man's land of New England's secondary.

Sidney readjusts his feet but the ground gives way under him. The ball bounces off of Sidney's hands and on to the turf. The crowd collectively groan. The voice of the play-by-play brasses within CenturyLink. The Seahawks straggles off towards the sideline in the short break, preparing to strike again.

On the Line, James Carpenter is pushed back by the big defensive tackle Vince Wilfork. at the same time the double team of Max Unger and Paul McQuistan drives the other DT, Kyle Love, away from the LOS. Lynch sees both blocks and immediately darts into the hole, Wilfork in tow. With his legs and knees wrapped up, Lynch lunges forward, half his body across the Patriot's 47 yard line. Both forces gradually gather around. Is it short? Is it enough? The referees casually walk towards the ball. Arms wave in opposite directions, signaling things beyond their control.

The head referee clocks his arm forward towards the south endzone. First down, Seahawks. The stadium rocks in approval.

Offense quickly moves back into the huddle. Doug Baldwin, who already has 2 catches for 74 yards and a TD, comes out for Michael Robinson. "Clock is rolling, a minute thirty-four left in the quarter," Ian Eagle mentions. No timeouts were taken, no sense of hurry. Just calm. An eerie sense of calm, of confidence, of momentum. Offense breaks out of the huddle, jogging to their respective placements. "Seattle down by six," Eagle retorts, as the cadence of Wilson echoes throughout the screen.

They would not be down anymore.

Wilson kicks his left leg. Miller motions from left to right in the I formation to just outside Breno Giacomini's right shoulder.

Anticipating the count, Wilfork gets the start and lunges forward towards Carpenter, forcing Unger to turn to his left and help with such a tenacious rush. Wilson strides towards his left again, following the runs of Michael Robinson and Marshawn Lynch. He fakes the handoff, drawing the fake of all three linebackers on the Patriots side. Lynch stuffs the forward movement of Wilfork while Robinson bounces off to block. The other DT has turned his shoulder and ends up rushing from the right, off of a stunt perhaps, leaving Miller to block one-on-one with the DE.

Rice gets off the ball and runs down the numbers. Anticipating. Waiting. In this drive alone Rice has missed one crucial throw and let things get the better of him. Not this time. 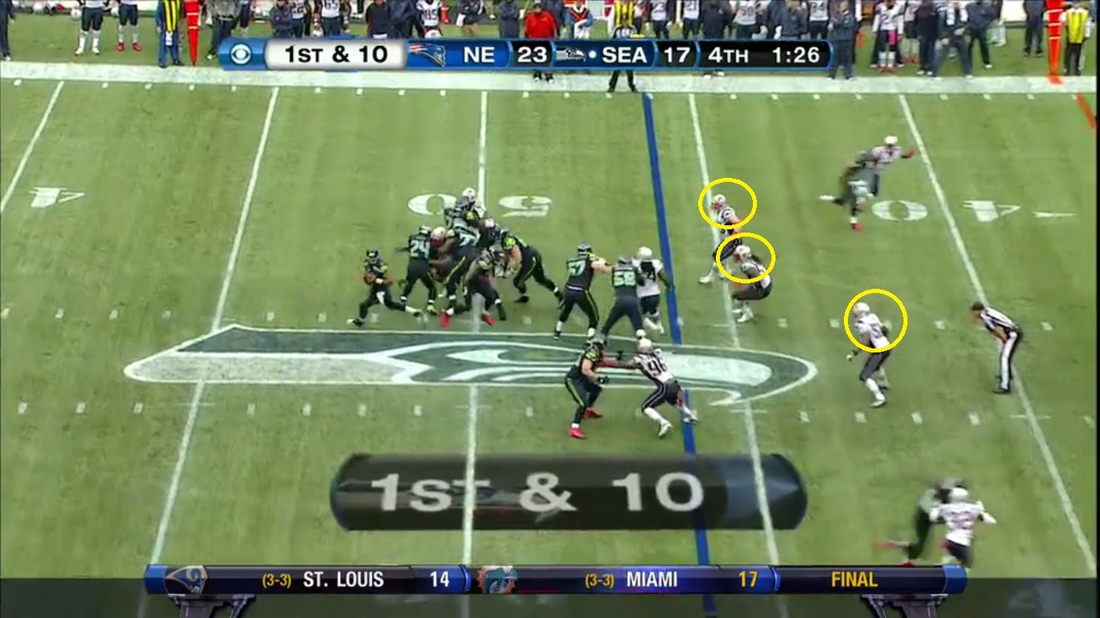 Wilson rolls out cleanly with a clear throwing lane. The offensive line holds their blocks again. Spikes begins to move in on a delayed blitz while Love retracts his rush and rebounds from the right side. Wilson has time and space, so now all he has to do is wait.

Rice beats the DB Devin McCourty and is in the middle of the field, past the first down. He sees the second DB Tavon Wilson in front of him, and throws a quick move to the outside before turning inside. Tavon Wilson bites.

Russell Wilson has to wait no longer. 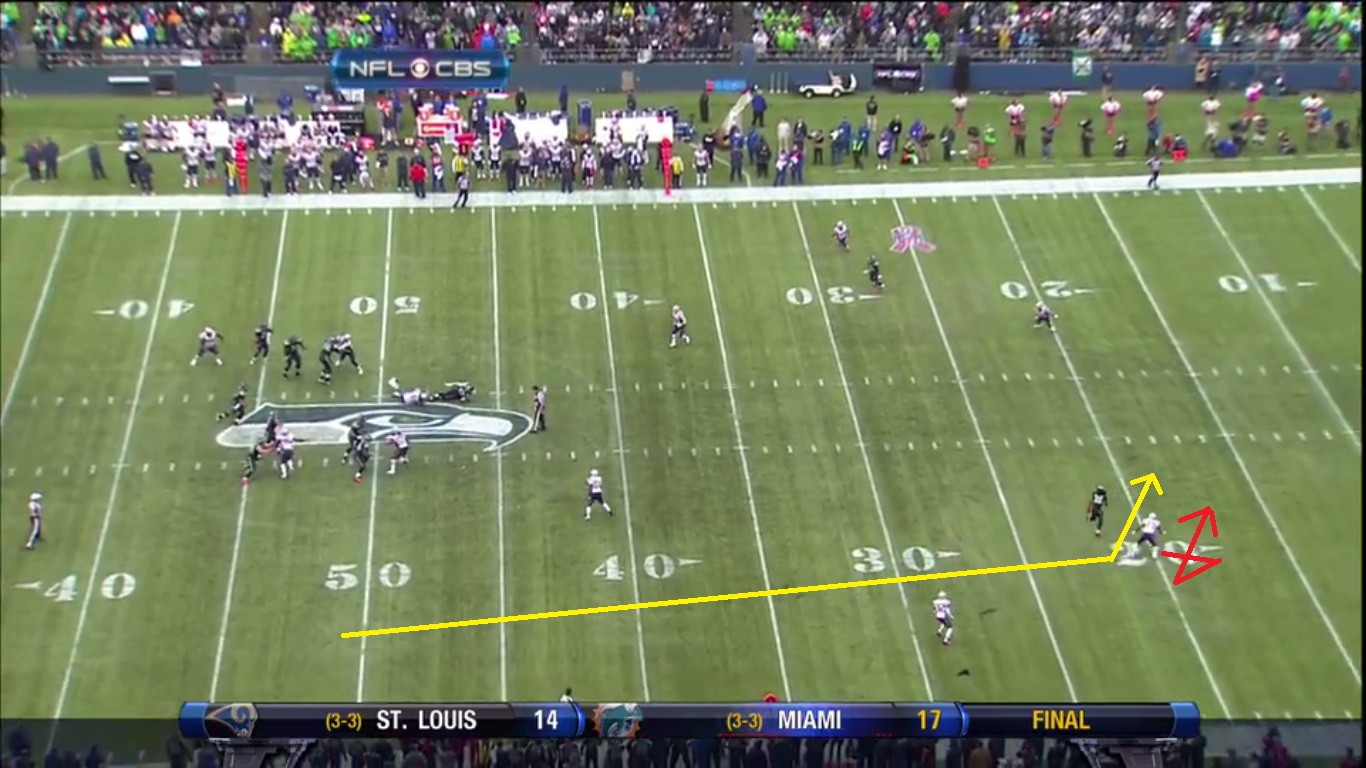 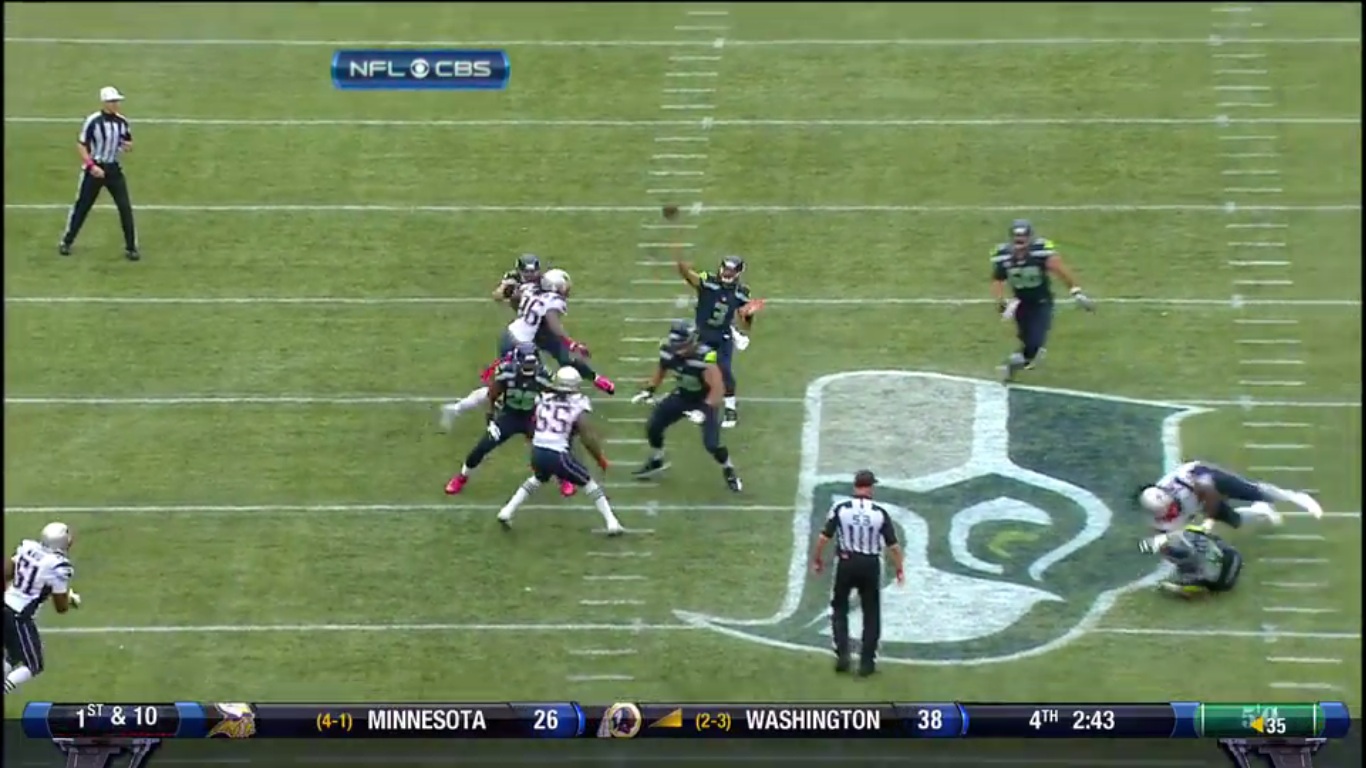 The ball glides in a rainbow arc, 55 yards into the air before settling into the outstretched arms of Rice. He falls, but he falls into the endzone, he falls with the football, and he falls with a touchdown. The referee stands with his arms outstretched upward, signaling the 60,000 plus people in the stadium to rise as well. Claps all around. Yells. Screams. Fist pumps. High fives. Smiles. Wilson simply points to the sky. Pete Carroll hugs his Running Backs coach Kippy Brown. Rice is mobbed by his fellow teammates Golden Tate and Michael Robinson. Others are more flamboyant, jumping up and down.

In just a span of one minute and thirty five seconds, momentum has swung the Seahawks to a one point lead, which is all they would need to pull off a miraculous win. With three minutes and two seconds left in the 4th quarter, advance stats listed the Patriots at a 87% win probability, and any realistic, rational person would've projected and believed in a Patriots victory.

For once, I'm glad that neither the Seahawks nor their fans were rational for just one moment.