On Sunday, Richard Sherman put Tom Brady (and the rest of the NFL) on notice: the Seahawks are young, brash and they aren't going anywhere.

Share All sharing options for: Richard Sherman and the Seahawks' New Personality

Up 23-10 and driving last Sunday, New England Patriots quarterback Tom Brady reportedly told Richard Sherman to get Earl Thomas and meet him after the game, after the Patriots won. They did, which was thoughtful of them, considering they had two of Brady's passes to return.

Later that night, Sherman tweeted THIS, which you've all probably seen by now, sparking an evening-long tete-e-tete with Pats fans that caught the eye of the national media. 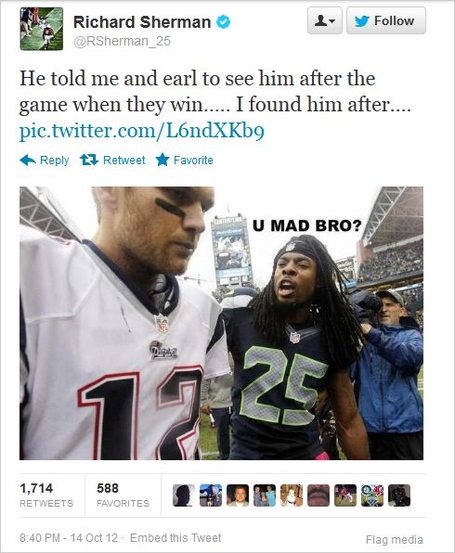 In the lockerroom, Sherman stood by his actions and, perhaps more importantly, included the entirety of the Seahawks with him:

People don't understand... We've got great players in the Pacific Northwest. The Seattle Seahawks have a lot of talent. People, they don't look at the film. They don't analyze anything. That's why these analysts and commentators need to shut their mouths.

It was everything short of Sherman telling Brady's wife that she needs a real man.

For Sherman, it seems, talking trash isn't just about establishing himself in the minds of his opponents, it's about serving notice that the Seahawks are to be taken seriously. We all heard about the story of him getting in AJ Green's ear during Sherman's first career start last year, calling Green "a lot of noise and bad routes", we saw him spend all game jawing with Steve Smith two weeks ago, and he's since developed a reputation around here as a commendable game-spitter despite claims that he never fires the first shot.

But this wasn't a little side story for the Seattle media to write about as a colorful accent to a postgame report, this was Sherman getting Giselle-close to Tom Brady, shouting his comeuppance into the face of the NFL. This was Sherman making sure that not just Brady knew who got the best of him, but the whole football world, putting his braggadocio on internet blast. This was a fifth-round draft pick in his second year telling national news outlets that his team is better than the Hall of Fame QB with five Super Bowl appearances, telling the country that the Seattle Seahawks aren't a fluke -- they're a contender. Now, a big mouth does not a great player make, anyone who was here for the Jerramy Stevens "era" knows that, but Sherman's talk is just the sizzle on the steak, not the steak itself.

Sherman's attention-grabbing quotes have gotten the majority of the press coverage, but it's Sherman's press coverage that should be grabbing the majority of the attention.* Despite playing wideout for most of his college career (and leading Stanford in receiving as a Freshman), Sherman switched to corner and did so in such an impressive fashion that Pete Carroll deemed him worthy of a draft pick. Less than half a season later, he was Seattle's #1 corner and finished in the top ten in each of Football Outsider's three most important CB categories.

And it's not like he's suffering a sophomore slump, either. Though most of the country is probably thinking Sherman is just a lap dog yapping at the ankles of a 90 lb Rottweiler, those who have been paying attention have seen something very different. Yahoo!'s Doug Farrar called Sherman "one of the best young defensive players in the league", Football Outsiders ranks him in the top ten in Success % Allowed (2nd), Yards After Catch Allowed (4th) and Adjusted Yards Per Attempt Allowed (7th), and according to metric-heavy Pro Football Focus, Sherman is the 3rd-highest rated CB in the NFL (just ahead of teammate Brandon Browner at #5). Furthermore, PFF says that Sherman "may have a claim as the best cornerback in football."

Don't think Sherman's been doing this on his own, either. No, the loud, fearless corner is but a microcosm of the new Seahawks identity: a bold young group of players undeterred by the meager expectations placed on them by most of the country; an eager swarm of hungry animals Hell-bent on making the league notice them, one marrow-liquifying thump at a time. Despite being one of the youngest teams in the league, the 'Hawks don't only want to show that they won't back down, they do so by showing up to your house, ringing the doorbell, slapping you in the face, and daring you to do something about it.

The audacious mentality is apparent on offense, too, as Seattle is running the ball more frequently (54.7%) than any team in the NFL. Their mindset, while not always successful (22nd in Offensive DVOA), is to raise up on hind legs, lower their collective head and ram into you, grinding their way forward in a testosterone-slaked battle for turf. While the rest of the NFL is opting for gazelle-like gameplans, Seattle chooses instead to fight like an Ibex. It's a personality that Carroll is proud of, despite being one that seems ill-fitting to his exuberant, sometimes giddy, sideline demeanor. And while it hasn't turned into a ton of yards, it controls the clock and, more and more frequently, opens up the passing game off of play-action, as Mike detailed earlier.

We've been anticipating that the pieces would begin fitting together this year and, while I admit this new Seahawks identity isn't quite what I imagined, I'll also admit that I like it way better. I came into this season looking for signs of congruence, of system compatibility; what we've gotten instead is a ferocious pride of lions that fight together not only by design, but by instinct.

Last year, Earl Thomas told me that this team was "young, but we hungry." Now, Richard Sherman is just letting everybody else know that it's time for them to eat.