Looking at why Richard Sherman is so good, and a few thoughts on other Seahawks players.

Share All sharing options for: I Love Richard Sherman's Hips, and Sundry Thoughts

Richard Sherman is good. Really, really good. This may be one of those memories I constructed for the sake of my own ego, but I seem to recall discussing Richard Sherman and Byron Maxwell on Field Gulls not too long after they were drafted, and arguing for Sherman over Maxwell based primarily on one thing: hips. Maxwell and Sherman are both big, physical guys, that "look the part" of the Seahawks-style giant corner. But what separated to two, in my mind, was the timing and fluidity of Sherman's hips.

That's a bit of scouting lingo, when they start talking about "opening the hips" and "fluidity of hips", so to make it a little more straightforward: a corner's stance pre-snap is usually with his hips horizontal to the line of scrimmage, and he will back-pedal with the receiver initially, before turning or "opening" his hips either left or right to follow the receiver's route. This is an absolutely crucial moment in coverage, and many matchups are lost or won at this moment. Open your hips too soon in response to a fake and the receiver will gain two steps on you in his route as you have to adjust. Open them too late, and the receiver will have passed you before you turn. Timing is paramount, but so is fluidity, the speed with which you turn, if you waste any steps while turning, and the fluidness of your adjustments. Sherman has this in spades. Brandon Browner and Byron Maxwell less so.

Now, don't get me wrong, I'm not saying Browner or Maxwell are bad. Browner has improved greatly in technique from last season and is making a lot less mistakes. Maxwell might be a good backup and big nickel guy if he wasn't injured so much. But neither has the upside that Sherman has, an upside that he has pretty much already arrived at. There's a lot of reasons for Sherman's excellence. He's a student of the game who benefits from his previous experience as a wide receiver and seems very aware of QB-WR tendencies every matchup.

He's an aggressive, physical jam corner that perfectly fits this scheme. He has the brash personality and short memory that tend to work well on cornerbacks. But those hips...I'm probably obsessing over those hips. But they're good! And it's a difference maker. Not saying it's unusual to see timing and fluidity on Sherman's level, I've seen it before, but generally only on smaller cornerbacks. It is the unique combination of fluidity and size that makes him so good.

A few moments from the Patriots game... Speaking of which, it was noticeable in this game that the Hawks played a ton of off-man and mixed in quite a lot of zone coverage. Both done purposely to disable any long passing game and force to Patriots to take the short stuff, then allowing the big physical defense to punish the receivers catching over the short middle. Excepting a few long passes to Welker and Fells, this plan mostly worked out great.

This is a good example of timing of hip movements. Sherman does not turn his hips to Welker's step inside, but gets a hand on him as he moves outside and opens his hips at exactly the right moment, allowing him to follow Welker stride for stride. His positioning is perfect and his timing to punch the ball away is perfect. If the throw had any less juice on it this would've been a pick. This is press-man corner play at its finest. 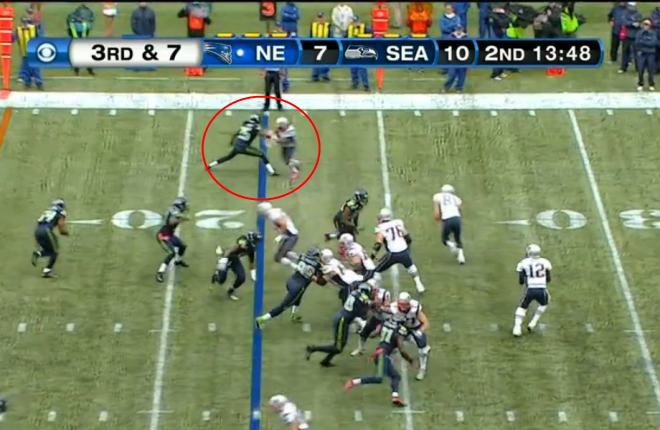 Note how far he strides to deliver it, but then he immediately steps back, opens the hip to the inside and moves to underneath the receiver's route. He doesn't significantly delay the route but he doesn't lose any positioning either, because of the fluidity of his hips.

Sherman is in the slot on Deion Branch. The Patriots lined up an RB (Stevan Ridley) to the outside, and the Seahawks respond by putting a linebacker in the corner spot to cover him, moving Sherman to the WR on the inside.

The play itself is actually not that noteworthy. Sherman has good inside positioning and plays it well but this is a really poorly thrown ball to a well-covered Branch. Poor decision and throw from Brady.

Here is another slot matchup with an LB on an RB (Woodhead on Wright) on the outside. Sherman jams, stumbles and Branch has a fairly clear road to the endzone, but Brady has already taken the underneath pass to Hernandez. Sherman seems to want to force Branch inside and has already opened up his hips this way when he has to adjust to Branch's route. This is how a simple mistake in hip timing can open up a receiver for big gains.

-- So, Sherman is really good. Is he the best player in the secondary? I don't think so. Earl Thomas quietly still does what he does best, and our secondary still pivots around his ability to cover single high so well. Thomas was getting a lot of criticism on twitter and elsewhere during the Patriots game due to his poor tackling form and dropped picks. Now, not saying that's not valid, but realize we didn't pick him up for his tackling prowess, and he will never be Troy Polamalu. He's a good but not great tackler, and he will miss shots at full speed sometimes.

The interception thing fascinates me, because over the past few weeks he's consistently been positioning himself to make plays and then just falling short. If this becomes a structural problem then yes, that's terrible, but my first thought would be that not many players could position themselves like Thomas could, and if he keeps doing it the picks will start coming. It feels to me like he's right on the precipice of becoming the ballhawk his skillset and positioning allows him to be, but that's just "a feeling".

-- Richard Sherman and Earl Thomas are both on pace for pro bowl seasons. Other players that I think should make it to the pro bowl or at least be first alternates if they keep up their pace of play are Brandon Mebane (who has been absolutely outstanding), Chris Clemons, Max Unger (it was worth rewatching the Patriots game just to see him single up against Vince Wilfork and win), Marshawn Lynch and Jon Ryan. Kam Chancellor probably needs to cause some turnovers for consideration. Russell Okung might make it, as his play has really gone up ever since James Carpenter was put in at LG (as my fellow writer Joshua Kasparek predicted would happen), and the dearth of LT talent in the NFC might get him in.

That's a lot of talent on a once-talent-poor team, and all but Ryan and Unger acquired by the current FO. Bobby Wagner and Bruce Irvin are both making cases for Defensive Rookie of the Year honors. Wagner/Wright could be argued as pro bowl candidates but the NFC is rather full of LB talent and it is a tall order to beat them out.

-- Russell Wilson has looked pretty good the past two weeks, but he's also played two of the worst passing defenses in the league. I spent too much time on twitter pounding the drum that he would look better these two weeks, and indeed he did, which is not a huge surprise but it is a big positive. The Panthers aren't that bad, really, but they were without Chris Gamble. The Lions are coming in two weeks and they're about as bad, and the Bills are quite bad too, but here is the top-10-ish passing Ds Wilson will have faced if he plays all 16 games: San Francisco twice, Arizona twice, St Louis twice, Green Bay Packers, New York Jets, Chicago Bears.

The Bears are currently the league's best overall and passing D, Jets are borderline top-10, but will probably not end top-10 without Revis. Still, that's 9 matchups against really good to great Ds, not even including the pretty good Cowboys and Vikings. If he struggles against the 49ers after a short week of prep, do pause before you start booing and calling for Flynn again. Wilson has been pretty good on average considering the matchups he's been facing, and what we should look for from him as a rookie playing in less-than-ideal circumstances against top-level Ds is not spectacular play, but just play that is good enough not to lose, and - more importantly - steady improvement. In my mind's eye, I'll be comparing this performance to his game at the Cardinals, and seeing if he looks less frenetic and more in control.

Note for regulars: I have not been around much at all since the season started. Too much going on in life to focus on football much, and I apologize for returning with such an uninspired article. I'm also still not that used to the new layout. But uh...hi! How 'bout them Seahawks?