Breaking down a few simple line protection calls that an offensive line must make.

So last week I went through and explained the basics of play design and execution. This week, in a short series of articles, I want to talk pass protection and pass rush schemes and help people understand how this execution can hurt or help you.

The first and biggest thing you need in pass protection is quality center play. These guys really give the line their marching orders and make sure everyone knows their assignments, and will also be the most active post snap in making sure the line is active and communicating -- most importantly on delay rushes or stunting.

1) Sliding protection -- this is actually the most common action and refers to a line moving to close gaps or rushing lanes against pressure looks. This is where guards and the center will block right or left together. This does not mean the lineman are doing the electric slide. It's not nearly that exaggerated. The tackles will not always move in a slide, but they can.

2) Chip block -- this is used when your tackles on either end have trouble getting off the ball on speed rushers. Usually a tight end will chip, but sometimes the speed actually requires a chip with a fullback. A chip block is basically where a blocker will quickly impede the progress of a speed rusher by delivering a shoulder to the side of the rusher, causing him to be slowed enough for the tackle to then block adequately. A famous example is Joe Gibbs' penchant for using an H-back to chip Lawrence Taylor. The back or tight end will then continue to run his route.

3) Double team -- this is mostly done inside to help clear the middle of the pocket; center and guards will double to move defensive tackles. Sometimes, if tackles show a real lack of ability to block speed or power rushes, they will get help from a tight end, and unlike the chip, the tight end will not release at all and essentially becomes an extra tackle on the edge.

Now on to the fun.

I'm keeping things pretty simple here in these diagrams. Most times during a game, more would be going on with a d-line, like stunts and twists and delay actions. If I tried to cover all the possibilities it would be a short novel. And while I will cover this in an article later this week, I decided for this article to leave the defenses vanilla, save for a single blitz look.

What I want to do is help people understand why Pete Carroll says, more times than not, when there's a free rusher at the QB that it was a "problem with communication." Crack your knuckles we're ready to go. 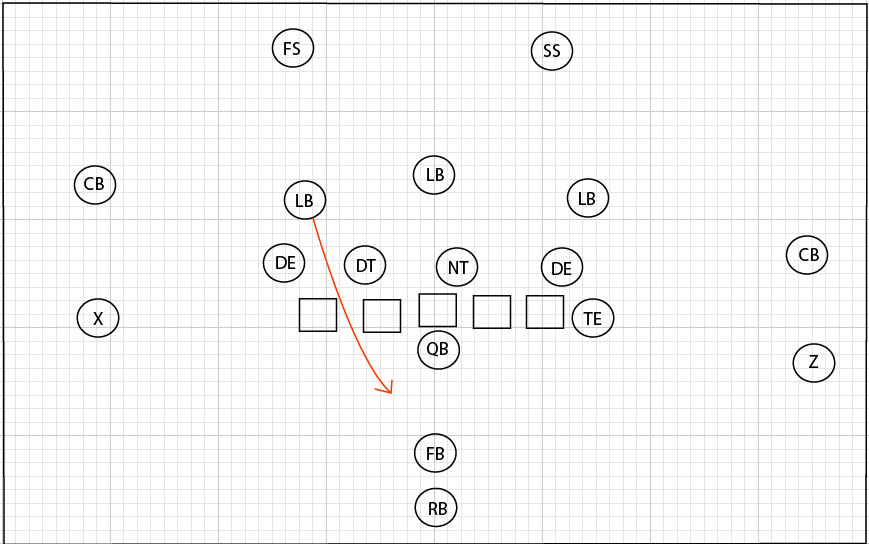 This here is a base 4-3, typical blitz into the G/T gap -- usually referred to as a 'B gap' in football terms. The linebacker comes straight in at the snap with no delay. There are two responses that the line can take if the defender shows his blitz pre-snap. The running back can pick it up, or the guard and tackle can pinch their gap.

Having the back pick up the pressure is typically harder to accomplish, because even if the QB, who is under center, alerts the back that he is now a blocker, the back has more ground to cover from his depth, and angle to the blitz is pretty difficult.

However, the guard and tackle would have a hard time too; the tackle, especially, would have a harder time if facing a speed rusher who he would normally swing out and wall off to make a sack difficult. In this case the tackle would take two steps straight back, lengthening the gap, and now a pinch is easier. But, a speed rusher on the edge has a good shot at running by the tackle. The guard can start the second part with a double team on the NT with the center and then pull off of the block and greet the linebacker. This all happens in the span of one or two seconds and communication ensures everyone knows what is being done down the line.

Imagine now that the guard gets too aggressive, or the tackle doesn't hear a pre-snap protection change. Now, the linebacker gets a lane and sacks the QB. Communication pre- and post-snap is the difference between a "picked up blitz" and a sack. 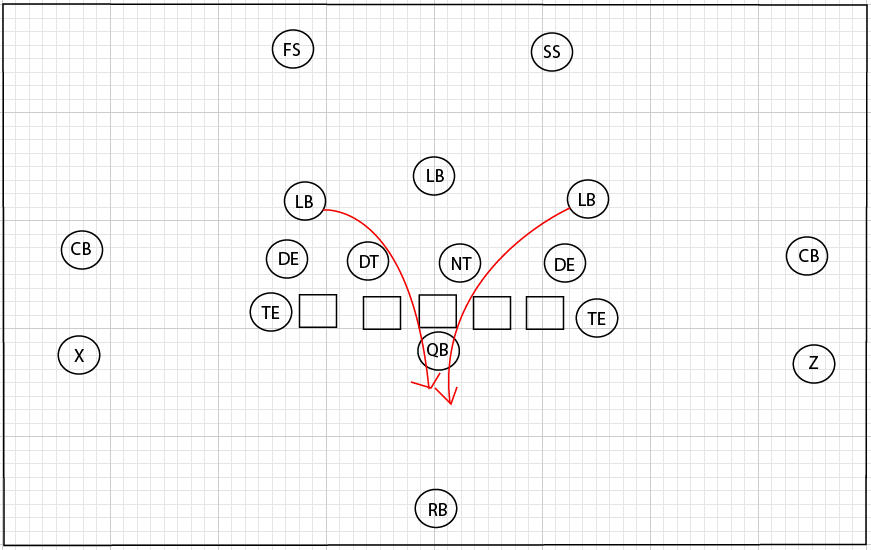 This one is a little more complicated. I picked it because 'Hawk fans that read this blog in 2008-2009 asked about this particular blitz play, and why we never seemed able to block it. This is called a "Double A-gap blitz," and every time (ok, not every time, but it seemed that way) that teams called this blitz during two those two seasons, Matt Hasselbeck broke a rib.

This play essentially stresses the center's ability to call protections and also react properly post-snap. A veteran center can pick up this pressure in his sleep, but must make sure that his guards know which guy he will pick up in this situation. Then a guard must pick up the other one. Your tackles then have to slam down on the DTs and the TE's must force the ends wide. This is easier than it looks and sounds, but it starts with the center being able to get his guards to help him out. If anyone panics or mistimes their actions? Free runner, QB funeral.