Share All sharing options for: The Jason Jones Effect

There are two important adages that I follow in life: one, you never know how much something is worth until you've lost it, and two, interior pass rush is the most important factor to a good pass defense.

It seems both of those sayings were quite applicable to the Hawks's loss against Detroit on Sunday, and it just goes to show why the defense "handed" the team an L for the first time this season. Particularly, the focus of the issue came against 3rd down conversion percentage and the quick slants inside that was very reminiscent of your Hasselbeck-Engram connection several years ago.

This West Coast Offense play has been a staple of many teams' playbooks and while it is not very hard to run, it is incredibly hard to master. WCO plays demands precise timing and execution - just look at the slant Russell Wilson ran on a 4th-and-2 earlier: 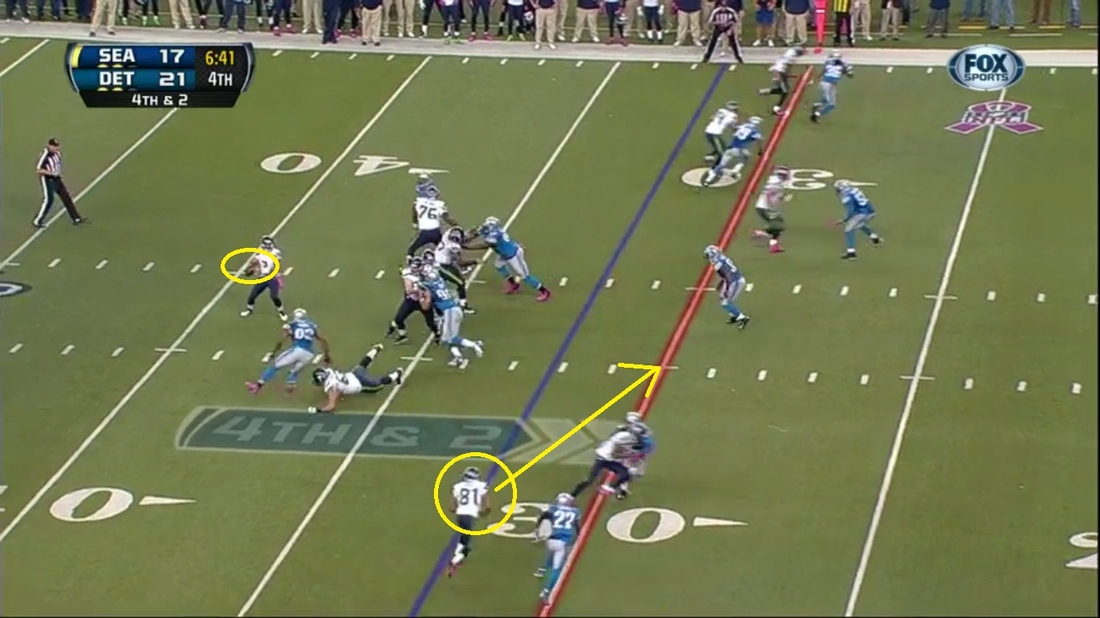 You can see here that Wilson already has his arm cocked and ready to throw even though Tate is a) not technically open and b) not where he needs to be for the conversion. But the ball Wilson throws is not aim directly at where Tate is at, but rather where he will be - at around the hashmark of the 30 yard line. Wilson also immediately throws the ball after one look - another typical no-no for good QB play.

It's a great balancing act of trust - for Wilson has to be ready to anticipate the position of where Tate will be and the fact that Tate will be there, ready at the right time. Tate, in turn, also has to trust in Wilson throwing a pass that's accurate (a catchable ball, if I might say) and also on time. If neither of the factors happen, then it's a likely incompletion or interception.

Trust. Timing. Correct Judgement. Quickness. These are the factors in running a good WCO. And it's not only for quick slant routes - outs, short curls, and other short routes all are based on the essential factors above. It's rare for a team to be perfect in this regard, and even the masters of these connections - the Hasselbeck-Engram, the Brady-Welker, the Montanta-Rice - takes consistent practice to time the steps and rhythm for the play to work. The point though, is that if practiced well enough, it will always work on medium-short yardage situations.

Having interior pressure and the form of Jason Jones is the key for Seattle's defense to disrupting this timing and rhythm, in my opinion.

The offensive line, which has continuously improved their pass protection since week 1, kept Wilson safe and clear from a disruptive inside duo of Ndamukong Suh and Nick Fairley on Sunday and the lack of an interior pass rush allowed Wilson to easily drop back with a clear throwing window.

For the defense, when you can collapse the pocket from the inside, many good things usually happen. Since it is the closest distance between the defense and QB, almost any form of interior pressure negates the QB's ability to step up in the pocket, and forces them to either make the throw to where they are or rollout - the latter option also being negated if the outside pass rushers are doing their job. We seen the wrecking ball of damage that one Rocky Bernard did on Alex Smith with a tremendous bull-rush: 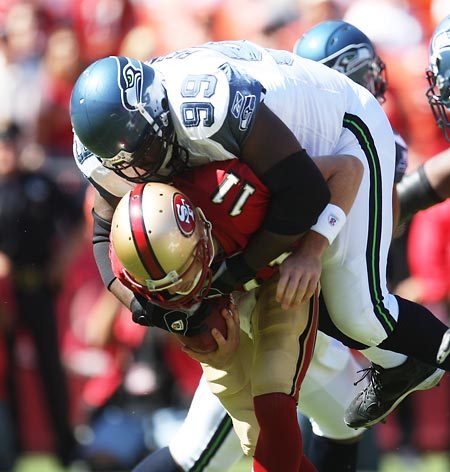 That's about as textbook as it can get.

In the same way like Rocky, he does bring a lot of interior pressure that helps break down the WCO quick game. From Week 7 against the 49ers:

Ted Ginn, on the bottom left corner, will run a quick inside slant towards the middle of the field - garnering about 5 yards at the catch and trusting his YAC ability to get the rest. Theoretically, the inside should be open. The play is drawn so that all three receivers lined up to the right (Moss, Crabtree, Davis) are all clearing deep, forcing the defense to draw back to defend them. 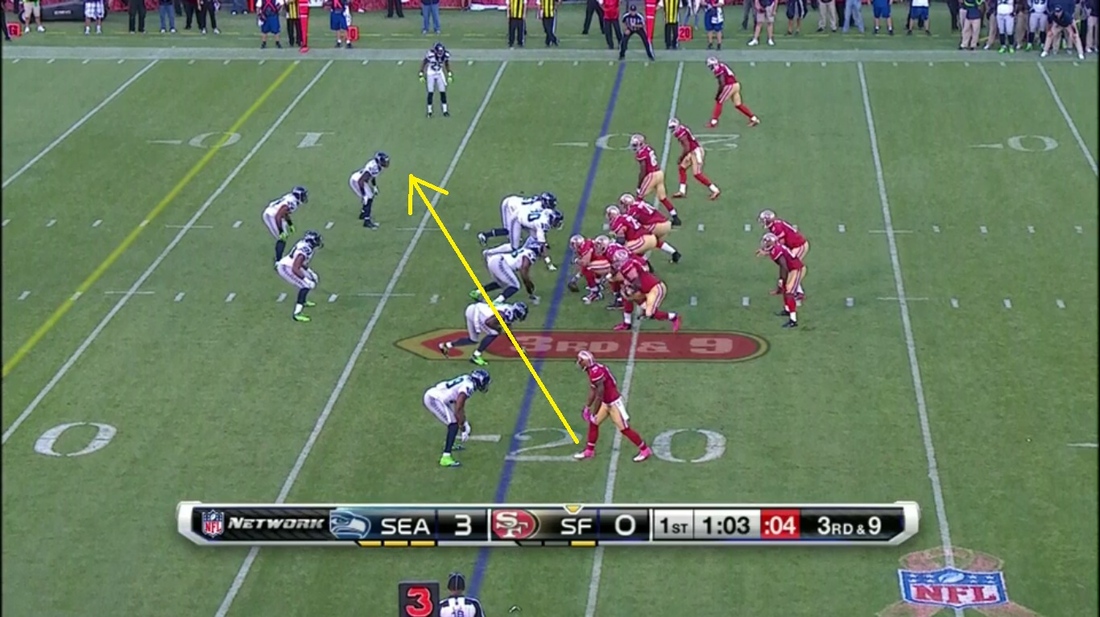 Ball is snapped and the play could not be outlined any better for the 49ers. The Seahawks' defenders are playing man on the left side, meaning that the three receivers SF lined up end up clearing the middle. What's more, Ginn gets a good jump off the ball and beats Browner inside. Ginn did his job, and now all he needs is his QB Alex Smith to do his. 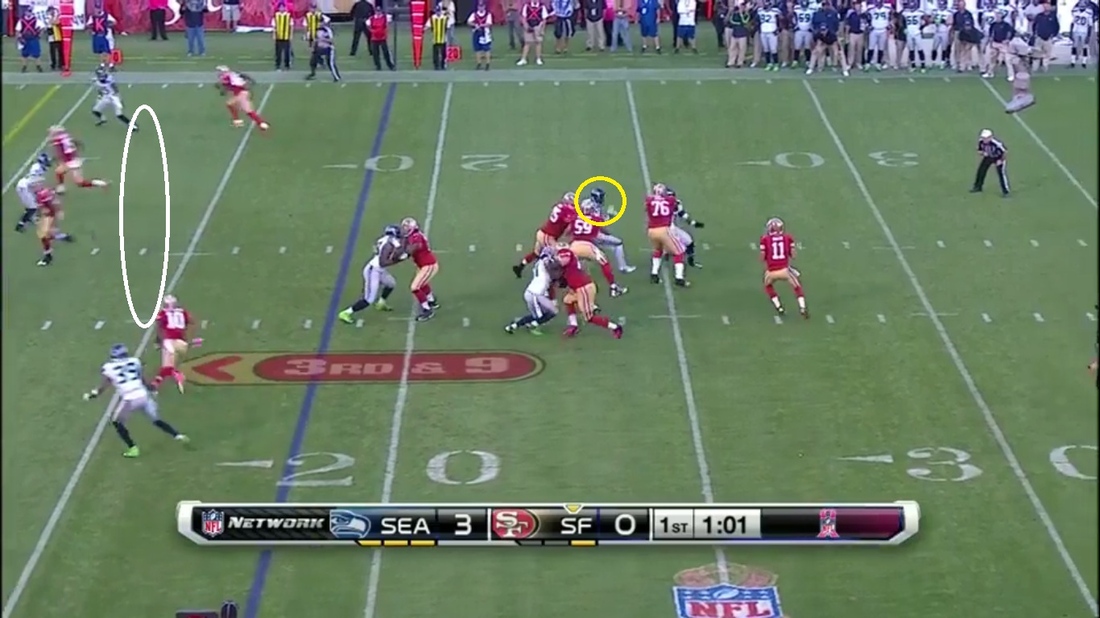 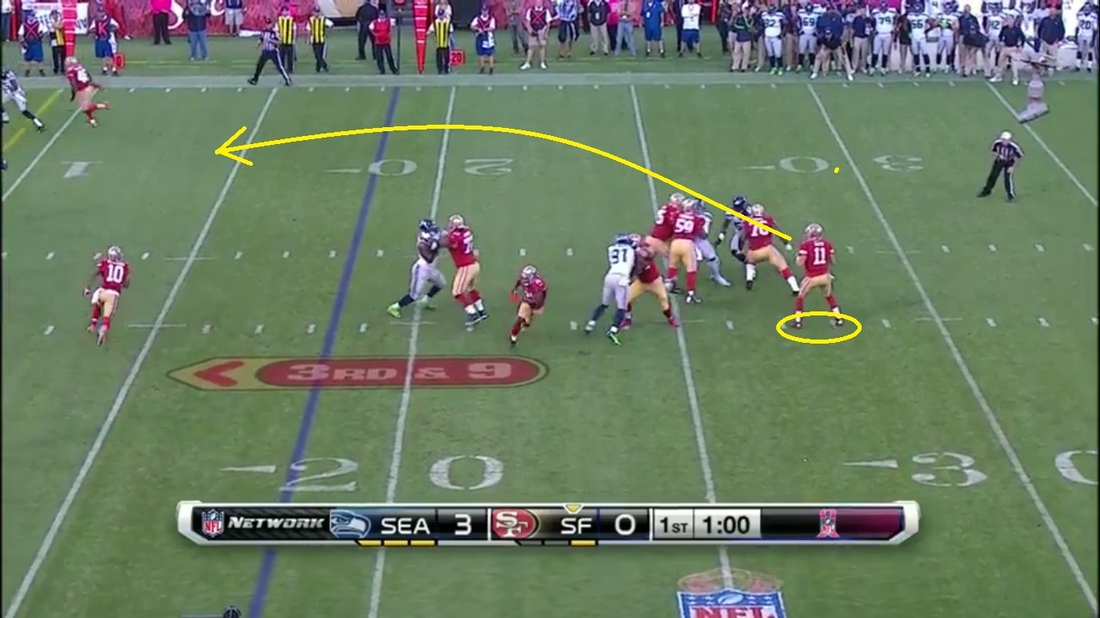 Smith sets his feet, ready to throw. He briefly looks left to shake off the defenders, but he's going to Ginn all the way. Everything should be perfect for the 49ers, except for Jason Jones.

Jones rushes inside and beats both the C and RG (as evidenced by the 180 degree turning in the 2nd pic). Whereas Rocky Bernard had strength, Jones has quickness. Forcing both OL to reposition their blocking, Jones already has an inside track on the pocket with his left shoulder free. Smith not only feels the pressure but he instinctively knows that any pass can be batted down. He's forced to re-adjust. 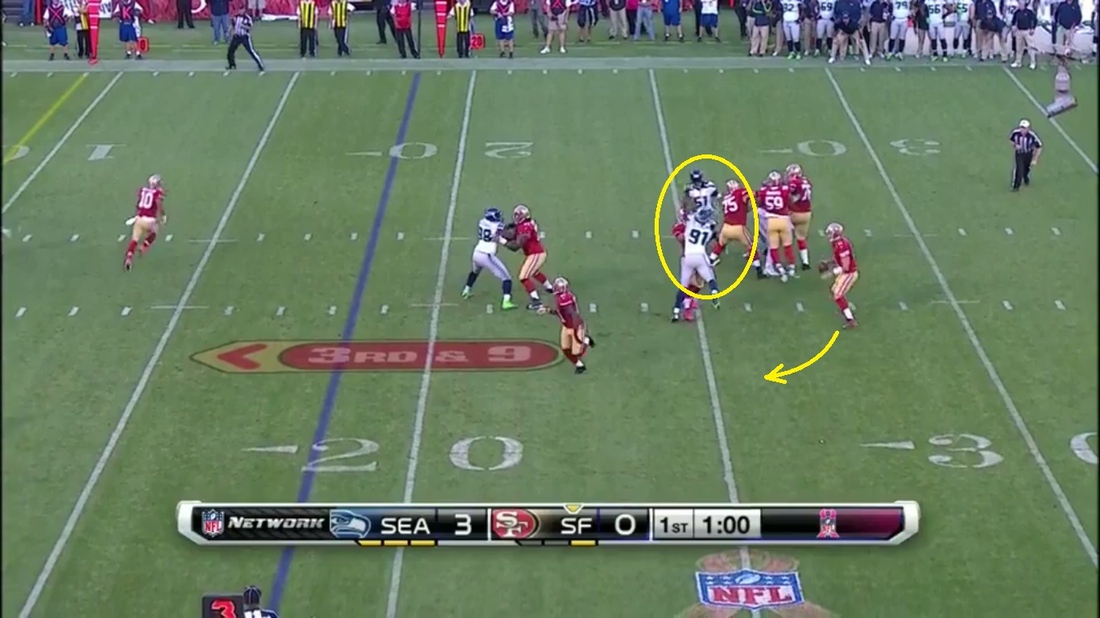 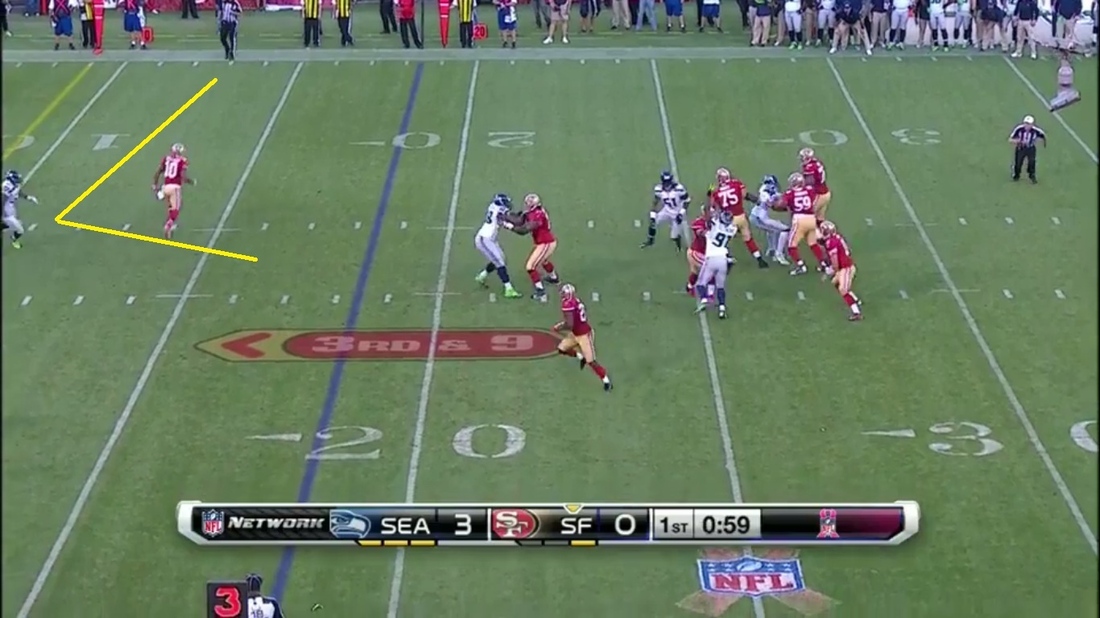 By the time Smith runs out, Ginn has already been re-covered by the defense. The designed play has been busted, and with this pressure Smith has two choices in either running for the first or checking it down to Gore. He does the former, but is fortunately tackled from behind. SF fails to convert and has to settle for a field goal.

We see another example here against one of the better quick gain masters in Tom Brady:

2nd and 10 - The Patriots are down by a FG and they need to move forward in any way possible. Two of the players run designed quick routes - Gronkowski runs a short curl while Woodhead, from the backfield, runs an out. 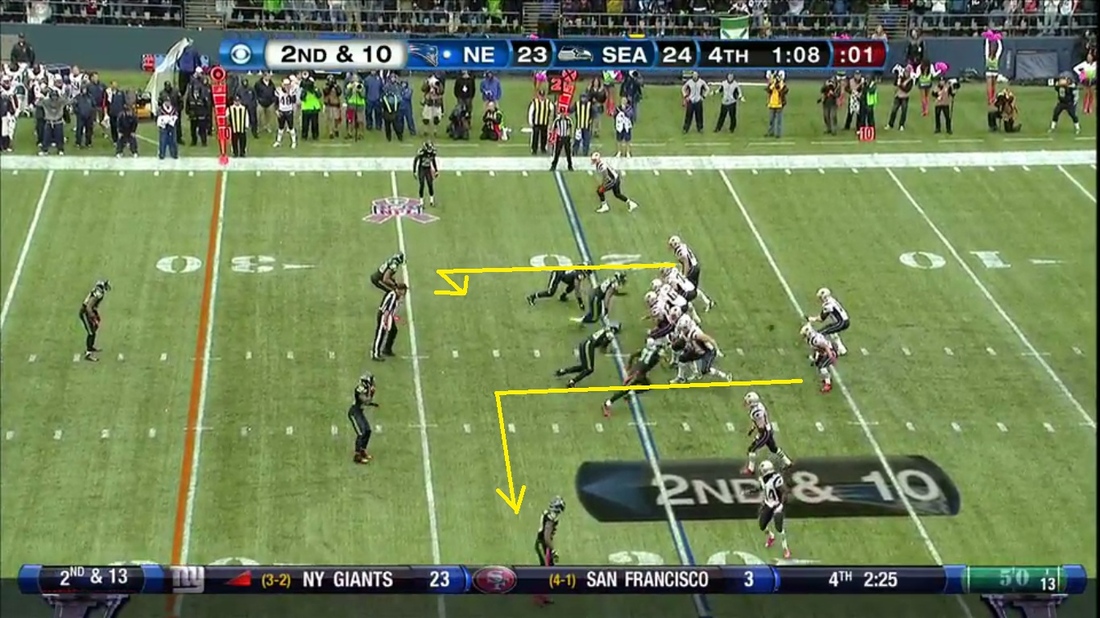 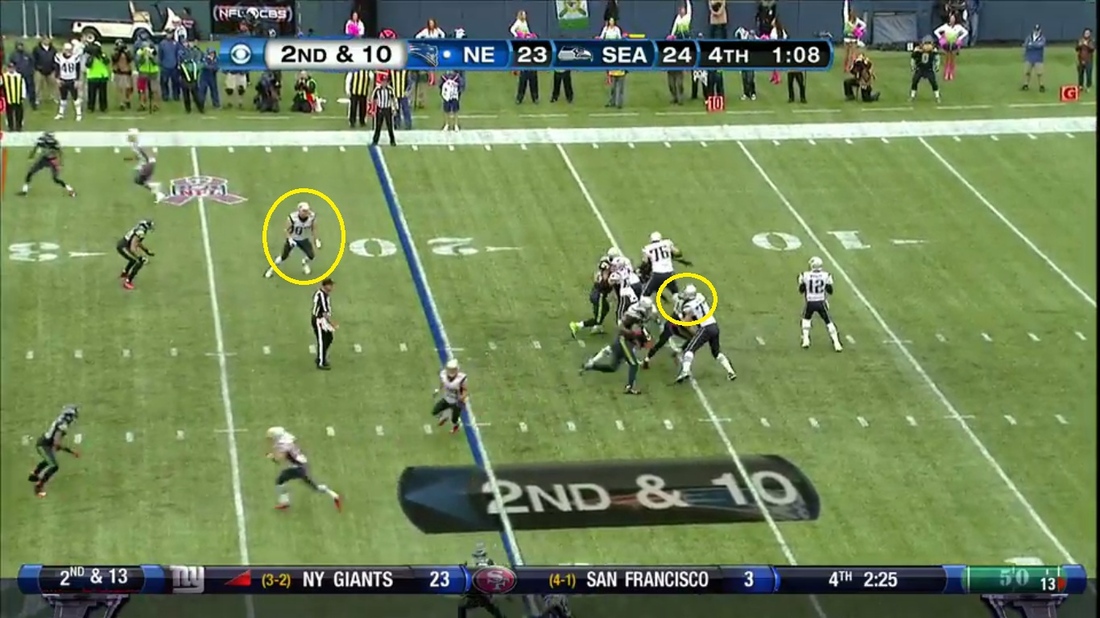 Again, Brady drops back three steps quickly from the snap and right away we see him look directly at Gronkowski without hesitation. And since the Defense is playing soft coverage, he also has a cushion to throw to. If he didn't feel safe on that throw, then Woodhead, who's running out towards the sideline uncleared, is a secondary option. He sets his feet to throw.

And again, Jason Jones is there to ruin everything. 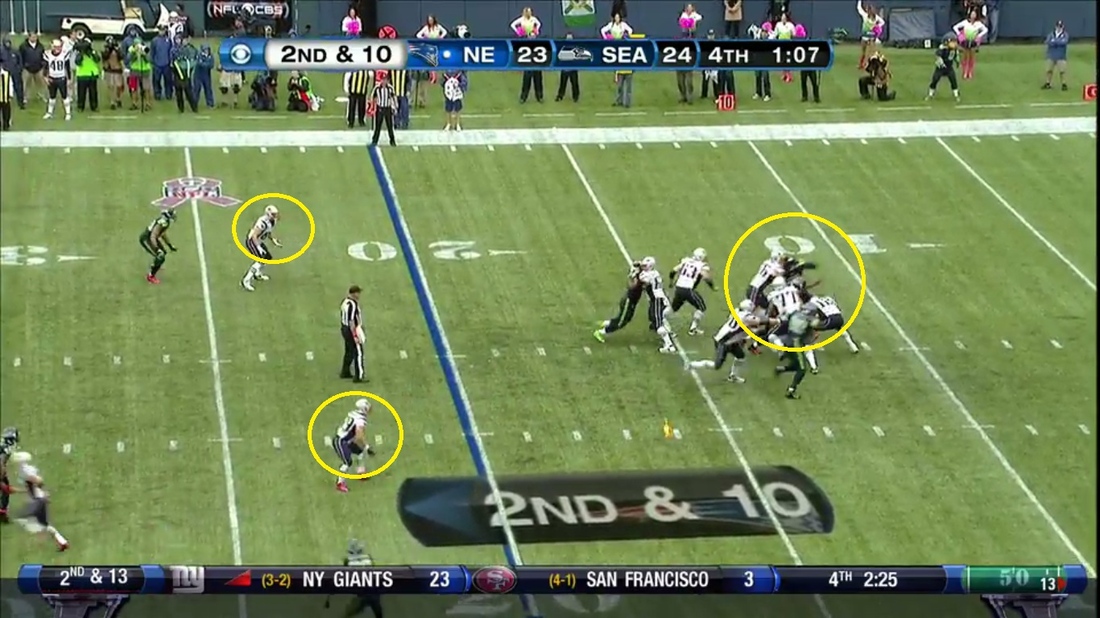 Now compared those two plays above to these two plays against Detroit, where Jones was absent the whole game.

Split out next to right, Titus Young lines up in the slot and prepares to run a quick slant inside. He has good speed, but, the other WR's also have to do their jobs in clearing out the middle of the field. 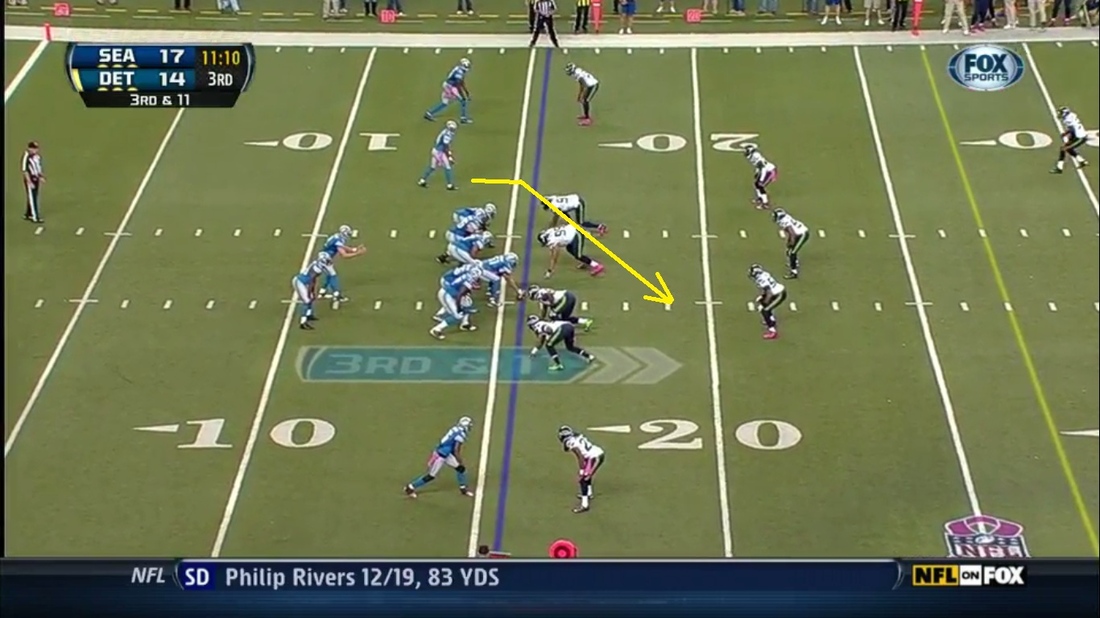 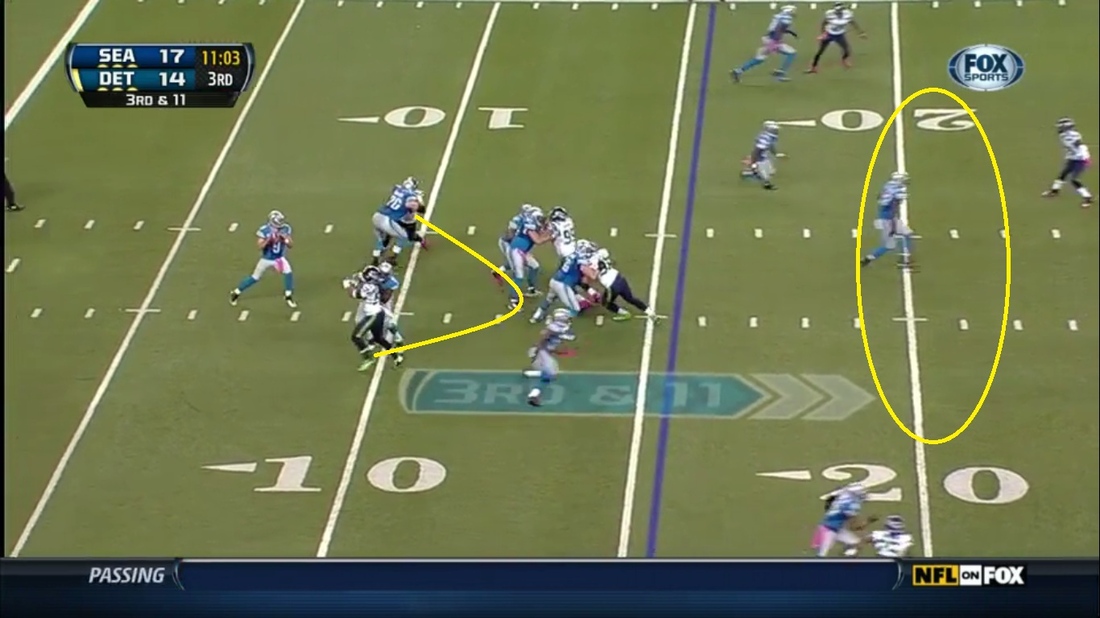 Ball is snapped and the defense is playing zone - a perfect scenario for a WCO play because all three LBs drop back without fail. The D-Line rushes, but the pocket is clean without any interior pressure. The OT's does a good job in letting the DE rush outside without letting in hamper inside. 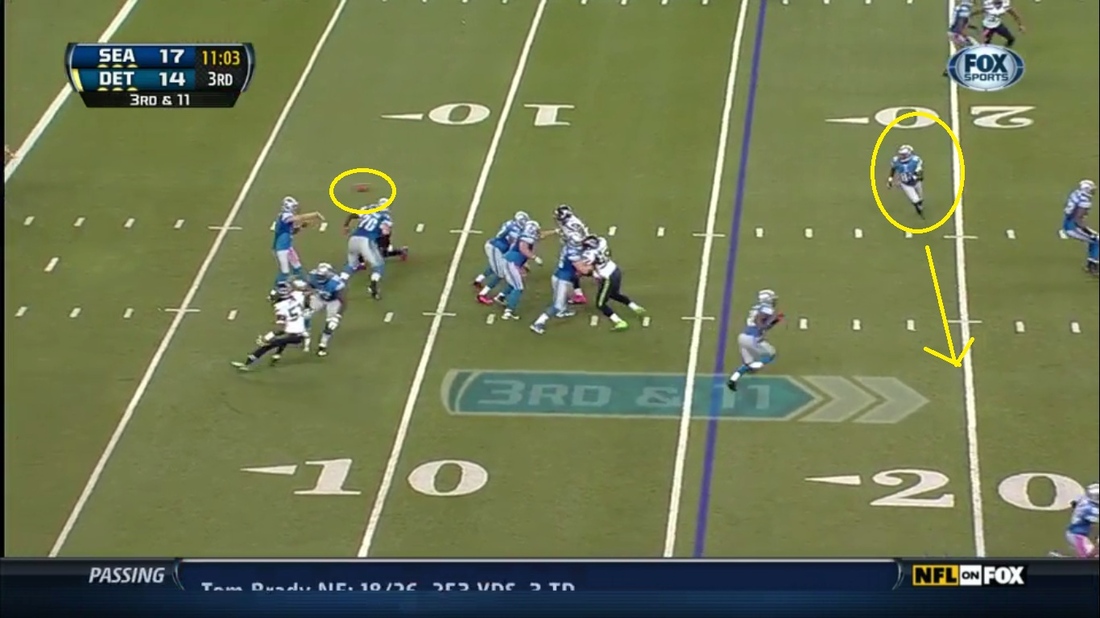 Stafford times his pass perfectly. Young catches within 5 yards and quickly turns up field for the other 6. First down, easy.

Later in the game, a similar situation happened. Only this time, the Seahawks rushed 6, instead of only 4. 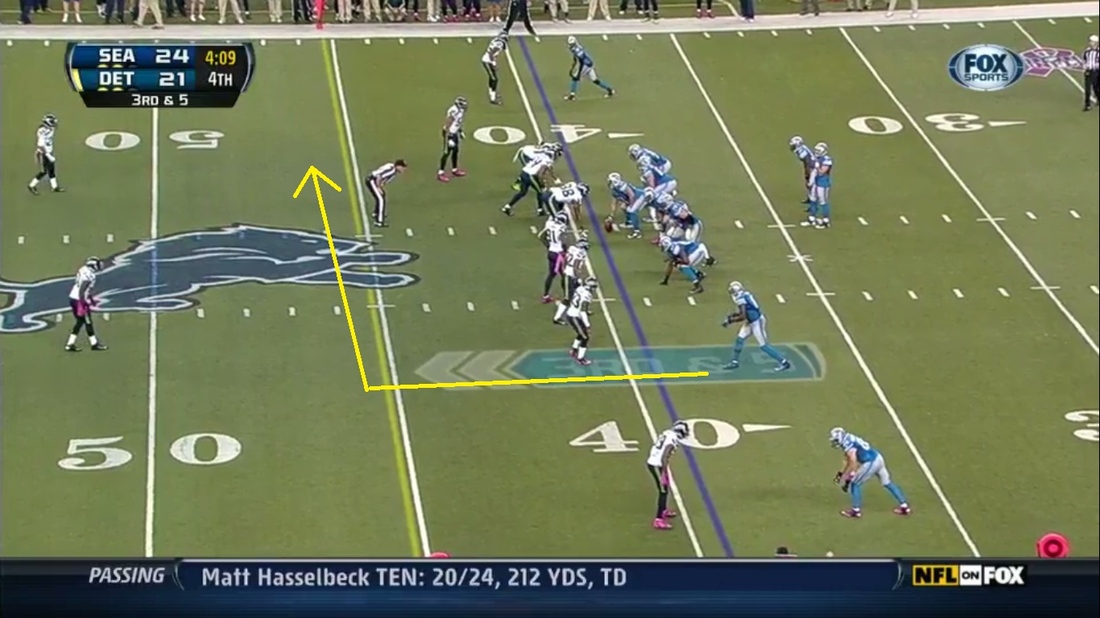 Calvin Johnson is lined up in the slot this time, running a quick in. The Seahawks does its best to compensate for a lack of a pass rush by blitzing both LB's. On the matchup scenario, it's Calvin Johnson against Marcus Trufant - fairly lopsided in the Lions' favor. 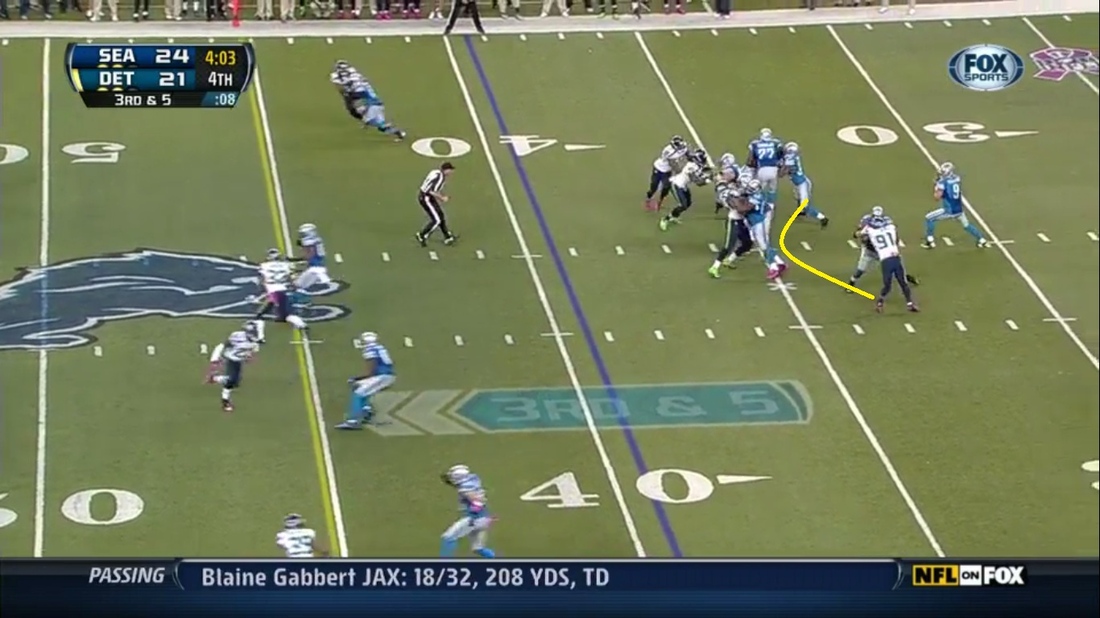 The Seahawks come after the Lions O-Line. The stunt here - with the DT Scruggs bouncing in before going out followed by the vice versa with both LBs - is way too slow. The pocket still stands within the "arc", and there is still no interior pressure. Johnson quickly breaks on the out before Trufant even has a chance to come in front of him. Another easy conversion.

To say that missing Jason Jones was the reason the Seahawks lost against Detroit would be a false assumption. But Jones carries a unique skillset that the Seahawks have been missing since 2008 - currently, backups in Jaye Howard and Greg Scruggs have not reached Jones' ability to disrupt the interior pocket so when Jones is hurt the drop-off is significant.