Share All sharing options for: Jermaine Kearse's possible role with the Seahawks

I count myself among those Husky fans that was a little surprised to see Jermaine Kearse catch on to the Seahawks' practice squad after final cuts, and still surprised today to see him elevated to the active roster in response to injuries to Doug Baldwin, Ben Obomanu, and Braylon Edwards. Now, to preface this piece - there's no real way to know how big of an impact, if any, Kearse will have on this offense or how big of a role he'll play, but what I wanted to do is explain a little bit why the Seahawks are seemingly so high on a guy with 'average' speed and size for an NFL receiver, that had a reputation for drops in college and was injured for much of the offseason and training camp.

I think the general reaction yesterday in the comment threads was confusion as to why/how Kearse has outlasted 'high-upside' guys like Kris Durham & Ricardo Lockette, and is now being added to the team's ever exclusive 53-man roster over veteran players like Deon Butler, Terrell Owens or Plaxico Burress or whoever.

There are likely a lot of factors at play here, but in talking to Davis Hsu and Scott Enyeart last night, we settled on a few key things, and actually have a little optimism about his possible role with the team.

First off - Kearse has a lot of experience in a balanced, pro-style offense under Steve Sarkisian (if you're living under a rock - Sark is a Pete Carroll protege who runs a program that is exceedingly similar to what Carroll has established here in Seattle in all ways). In this offense, Kearse was asked to block downfield for Chris Polk, play on the outside or in the slot (all three WR spots), and come back to the football or settle into open zones for 'mobile' quarterbacks in Jake Locker and Keith Price. Kearse is nice off play-action and attacks seams and can sit in zone holes, and had been the Huskies' most consistent receiver for 2 to 3 years.

Kearse was a security blanket and big-play touchdown maker for both Locker and Price (Price might be missing him quite a bit this year), and a good deal of his success came on the Sark (and Lane Kiffin) favorite go-to as OC's for Carroll and now with their respective teams:

Chris Brown broke down the "Sluggo" seam route over at Grantland during the offseason, and if you're unfamiliar, it's a staple of the West Coast Offense. In Brown's piece, he references a social media session by Matt Barkley in which the USC QB was asked to name his favorite play, to which Barkley easily replied:

From Brown: "To understand Barkley's answer, it's necessary to understand USC's offense. When Pete Carroll took the head-coaching job at USC, he hired longtime BYU assistant coach Norm Chow as his offensive coordinator. Carroll wanted the vaunted passing offense the Cougars had used for decades to topple superior foes and develop future NFL quarterbacks like Jim McMahon and Steve Young. To go along with that philosophy, Carroll also wanted to incorporate some of the latest NFL schemes, and his two young offensive assistants - former BYU quarterback Steve Sarkisian and a young Lane Kiffin - were assigned the job of bringing those ideas to USC.

"Kiffin in particular relished this task, spending long hours in the Tampa Bay Buccaneers film room with Bucs head coach Jon Gruden. Gruden was a student of the West Coast offense, the pass-first, timing-based offense designed by former 49ers head coach Bill Walsh. Kiffin absorbed everything he could about Gruden's brand of the West Coast offense, and quickly USC's coaches began meshing some of the latest NFL concepts with the core of their offense. After Chow left USC, Kiffin became co-offensive coordinator along with Sarkisian, before leaving to become head coach of the Oakland Raiders, Tennessee, and finally returning Southern Cal. During this time, Kiffin built a somewhat sordid reputation off the field, but on it, he continued to tinker with his offense.

"Among the plays Kiffin took from Gruden was one of the oldest, most reliable West Coast offense concepts: "sluggo seam," or, as Kiffin and Barkley refer to it, "82 stay sluggo Z win." Sluggo seam has long been one of the best home-run passes in the West Coast offense, so it is no surprise that Barkley would adopt the play as his own personal favorite."

"Sluggo," as Brown explains, is an old Bill Walsh term that's short for "slant and go" and as a staple 'home-run' pass in the WCO, you know it's somewhere at the top of the Seahawks' play sheet. This is a team that lives on play-action with deep shots downfield and relishes any opportunity to create the 'explosive play'. Furthermore, Russell Wilson's accuracy and touch downfield on seam routes has been very good, and it's something the Seahawks are using to their advantage more and more as the offense grows together.

But let's back up and talk about Kearse. Just go back to Preseason Week 2 for a perfect example of this Sluggo route that Kearse loved at UW:

Seahawks are in "21" personnel here, two running backs in I-formation and a tight end set right (in motion) . Kearse is out to the right at Z, and Ricardo Lockette is at the bottom of your screen at X. 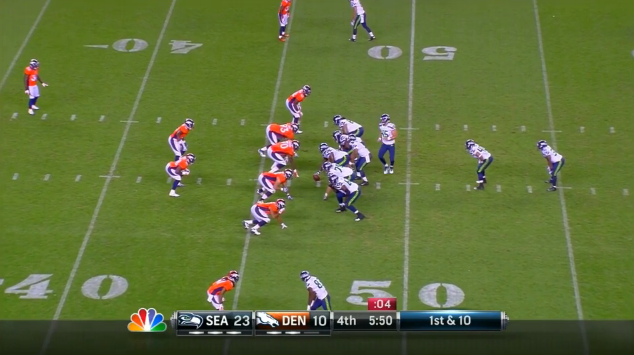 Russell Wilson fakes the play-action handoff. You can see this suck the linebackers up to the line of scrimmage. Kearse runs a slant - even selling his posture and body language to his defender as if he's going to the middle of the field to block for a run, but then puts his foot in the ground and heads downfield. 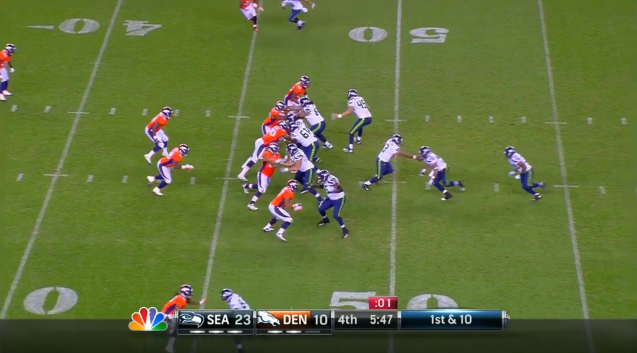 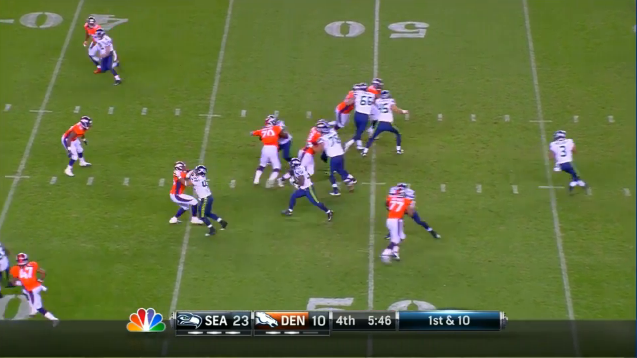 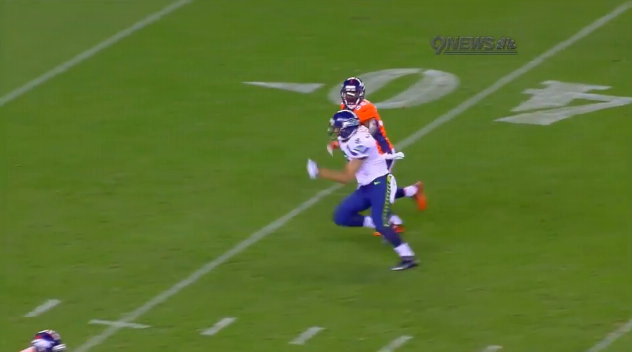 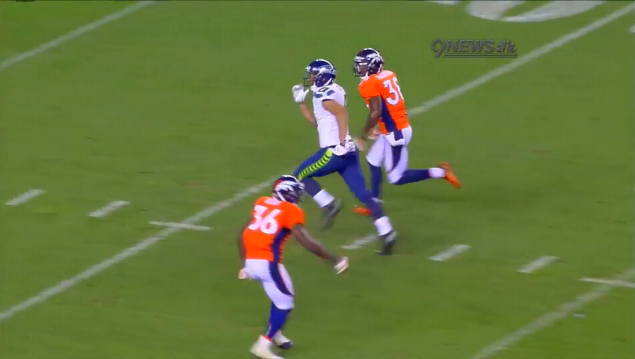 Wilson sees that the seam is open and Kearse has position on the cornerback. He throws it downfield from a clean pocket, putting the ball inside to Kearse where he can make a play on it and where he's sealed off his defender. 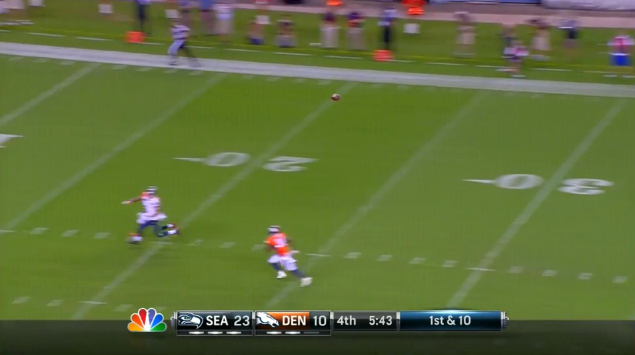 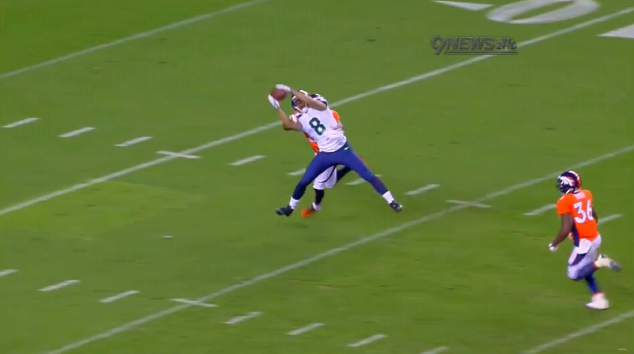 Now, it's not just the Sluggo. Kearse also excelled on adjusted routes in response to Locker or Price moving around out of the pocket off-script - and as Davis put it - Kearse became Price's 'stinger' by keeping the play alive. This should translate nicely to Seattle's offense if he can keep running into a 'second play' once Wilson is flushed from the pocket. (Examples HERE & HERE)

There's always the wild-card too that you could use Kearse as a 'joker-piece' of your offense, in the mold of Nate Burleson, Randall Cobb, or Percy Harvin (I'm not saying Kearse is any of these players, mind you), and move him around into the backfield and motion him around at will. Seattle curiously did this in the preseason too - putting Kearse in as a tailback 'when they ran out of running backs'.

Because we know that receivers can face a very steep learning curve upon coming into the NFL, experience in 'pro-style' offenses is of paramount importance. Kearse was schooled in the West-Coast terminology and should be relatively familiar with option routes and sight adjustments that Carroll and the Seahawks' offense use here, just from his experience in Sark's system. Brock Huard had noted on 710ESPN during the preseason that Kearse's experience in the pro-style system was noticeable when compared to his cohorts in Phil Bates and Lavasier Tuinei who both, incidentally, are now back on the Seahawks' practice squad (Tuinei hasn't been announced, but apparently he'll be back after playing in Canada these past few months), and both Danny O'Neil and Eric Williams made note that Kearse has looked good in their observation of Seahawks' practices.

Kearse, a University of Washington and Lakes High of Tacoma product, had been playing well against Seattle's No. 1 defense as a scout squad receiver during practices this season.

Don't get me wrong. I'm not suggesting that Kearse will be another Doug Baldwin or that he'll be a focal point of the offense (to be clear), but I imagine that the Seahawks hope to get from Kearse, this year, in 2013 and forward, something like what Ben Obomanu provides them as their 5th or 6th WR, for a fraction of the cost (making $500k vs $2M for the veteran), and with two more years of club control. He may not end up being that that guy or as good as Obo is, but with Obomanu voicing frustration that the Seahawks didn't wait for him to heal and instead elevated Kearse, its fairly clear that the staff is comfortable with the thought that Kearse can do similar things in their offense, not only in the upcoming two weeks where Kearse is badly needed, but for the rest of the season where Obo may have returned and contributed.

Now, naturally, Seattle could do the Seattle thing and release Kearse after a week or two and this writeup will be a distant memory and a waste of time, but when you consider all the pieces - this front office's knowledge of Kearse through their scouting of UW and relationship with Sark, Kearse's experience in similar systems and 'maturity' as a receiver, size, speed, etc - it seems plausible that this front office has a role for him in mind. This is backed up by the fact Kearse stuck around even after he hurt his foot very early in camp. I'm so used to seeing players moved around and others brought in willy-nilly because of injury that this alone surprised me.

Regardless, it's the first move Seattle has made in about a month or so, so I just spent 1500 words talking about the potential of the Seahawks' 6th WR. I did something similar with Kellen Winslow earlier this offseason too, so... yeah. Proactive like nonstop.