I watched this play about 15 times in a row last night. The thing that struck me initially was that it was one of the most impressive athletic plays I've seen anyone make in a long time. Watch it here -- Earl breaks in from the secondary, stops almost completely to mind a receiver quickly, and then as Sam Bradford pulls the ball down to start rolling out right, Earl hits the nitrus oxide and closes on him with absurd speed. I made note of the play on Twitter when it happened live - and I don't think it's an exaggeration to say that Earl is probably up there with the top 5 or 10 fastest guys in the league.

The more I watched the play though - particularly in the All-22 coaches tape, Earl's split-second decision and almost instant instinctual reaction to break on a route is what I came away most impressed with. Let's explore why.

It's worth noting that I'm surmising a bit and probably making too many assumptions in the following analysis -- there's no real way of knowing what Earl was thinking or reacting to unless you actually ask him or the defensive coordinator, but I'm just going off of what looks to be his decision making process. I'd be the first to point out that I could be off base, but this is how I read it. It's open for interpretation.

The play starts out with the Rams in a balanced '11' set in a 3rd and goal situation. St. Louis is leading 16-13 with 6:30 remaining. You know they are looking for more than a field goal right here - six and a half minutes is an eternity. Danny Amendola starts out to the left wing. Seahawks are in single high nickel defense, with Marcus Trufant in the slot to the offensive left and Mike Morgan the linebacker to the right. Amendola goes in motion right. 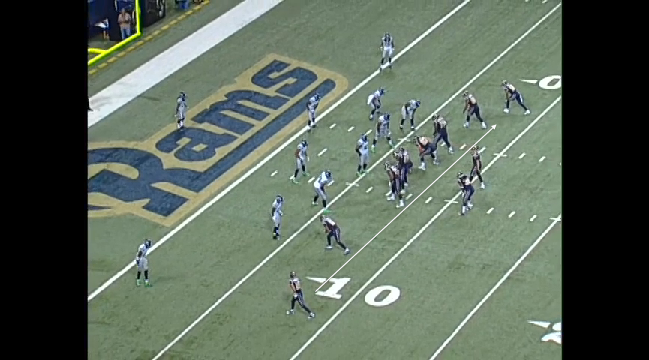 As Amendola motions to the right, the Seahawks' defense simply shifts slightly toward the bunch side, which is a pretty clear indication that at least some zone concepts are involved in their coverage scheme. This is what the Rams were looking for, one way or another -- and make no mistake, every single motion prior to the snap has a purpose. They're not just doing it for fun. They're looking for reactions from the defense, and in this case, with Browner staying out to his side, Bradford now knows that at least parts of the Hawks' coverage is a zone setup.

Kam Chancellor creeps up into the box and Mike Morgan shifts out on top of the bunch formation. 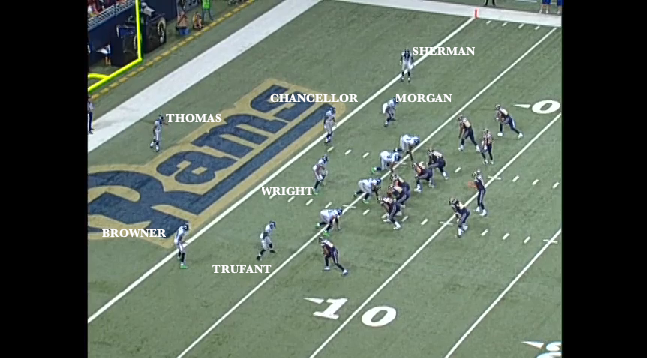 This leaves Brandon Gibson alone to the weak side of the field. In studying formations and trends of opposing teams, it's likely that Earl Thomas had seen this look before from the Rams and this knowledge was coupled with his understanding of what Greg Cosell loves calling 'receiver distribution and placement,' and along with known route combination patterns and trends, I can only deduce that extensive study has become key to this play.

Earl seems to recognize where the play is meant to go, and he stops the Rams from executing it.

Here's the routes as they'd be drawn up on the chalkboard. Essentially, Lance Kendricks and Danny Amendola will run routes to the corner of the endzone and right to the goalline, respectively, and will effectively gather the attention of Chancellor, Sherman, and Morgan to their side. That leaves Wright in the middle underneath, fairly alone.

Austin Pettis and Brandon Gibson will run crossing routes that are designed to make Wright decide between one of them -- they figure they'll see a zone coverage in that area and by running Pettis close over Gibson and underneath Wright that it should create enough hesitation and separation to give Gibson separation to make the catch. They don't count on safety Earl Thomas coming down so quickly. 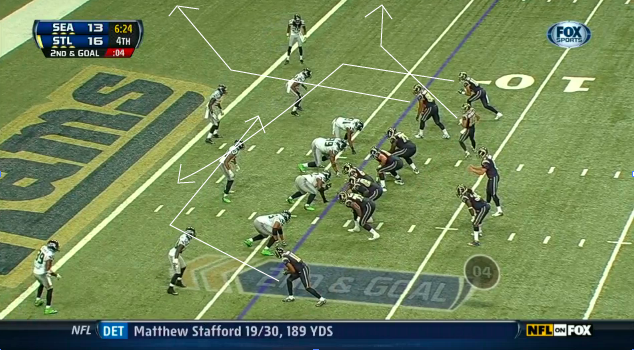 The primary read, I'd assume, based on Bradford's head/eyes and the double team of Brandon Mebane in the middle, would be Gibson running from left to right after Pettis has cleared K.J. Wright out of that zone enough or simply held him from following Gibson closely as he crossed the formation. "Freeze K.J." in other words.

Now, Earl is either a) blitzing late here, or b) remembering what he's seen in tape study, because at the snap, he reacts almost immediately. Shockingly quickly, actually. 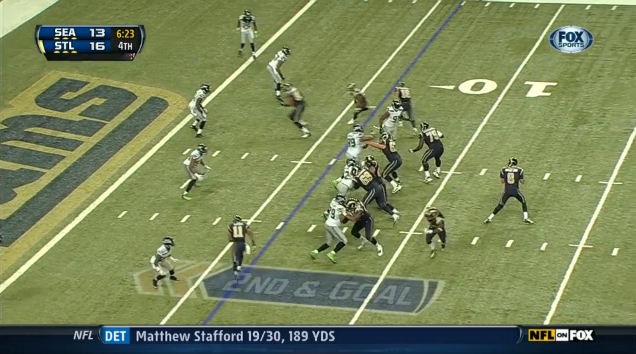 Two steps into Bradford's five-step drop-back, ET is already breaking downhill to exactly where Gibson's route is supposed to connect with the football - which I find either incredibly lucky or incredibly brilliant of Thomas.

You can see K.J. Wright occupying the middle of the field and to your bottom left, you can see Brandon Gibson making his way on a dragging route. This is the route that Earl is looking to cut off at the pass, so to speak. 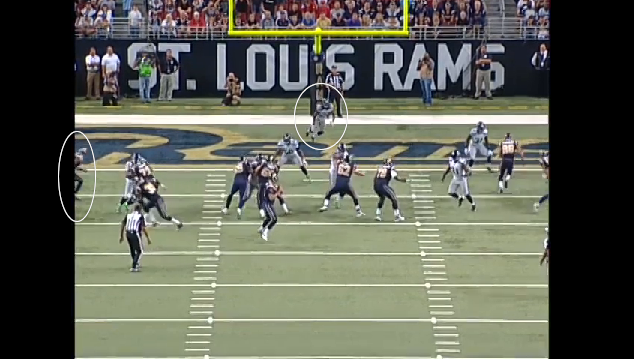 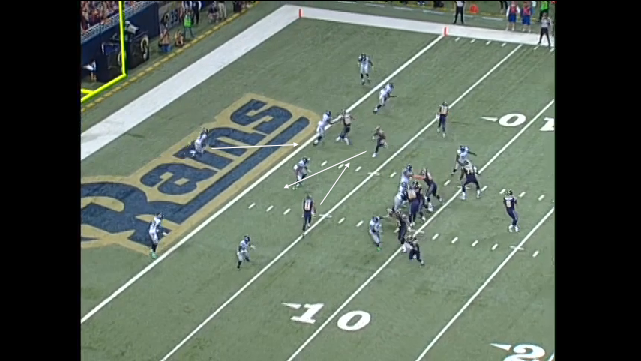 Note the throwing lane that the offensive line has created by doubling down on Mebane and leveraging on the DT and DE to the offensive right. For his part, by the snapshot below, Kam Chancellor has broken off his coverage of Kendricks to the corner of the endzone and feels the underneath pass coming on. Earl will beat him to the punch though, as he cuts Gibson off and forces him to stop his route in its tracks. 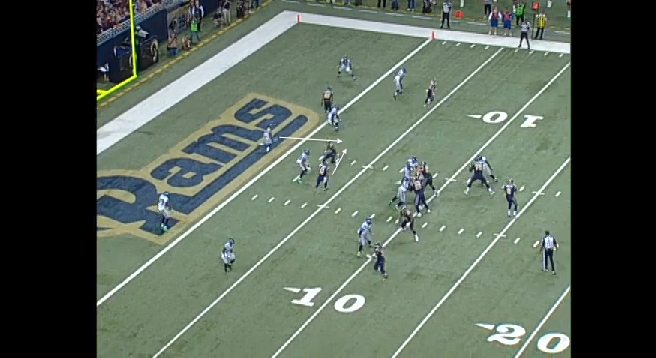 Below, you see Gibson and Pettis crossing underneath Wright and Wright will have a decision to make. This moment of indecision is what the Rams are looking to create. Bradford cocks and readies to throw to Gibson. 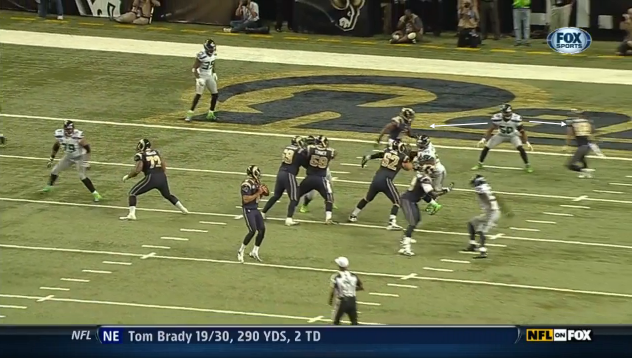 Earl Thomas has cut off Gibson's route though, coming down in from center field, and is now close enough to Bradford's intended target to cause a hesitation. Note that Pettis is now fairly open in the middle of the field but Bradford's line of sight to that option is severely obscured by the double team of Mebane. Bradford isn't looking in that direction anyway -- not sure he could have even seen Pettis at this point, regardless. 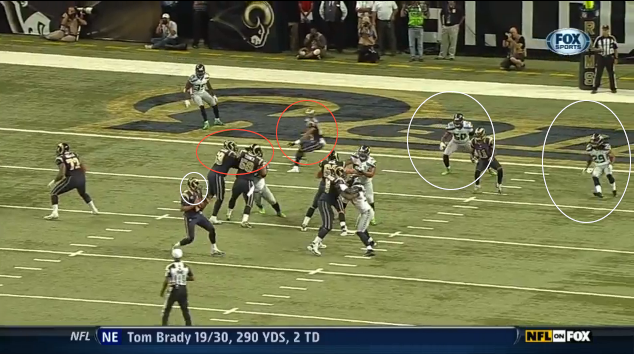 Bradford pulls the ball down after seeing Earl Thomas too close in vicinity to Gibson for comfort, and hey - he runs right and ignores the open guy in the middle of the field! He must be a 5'10 rookie! 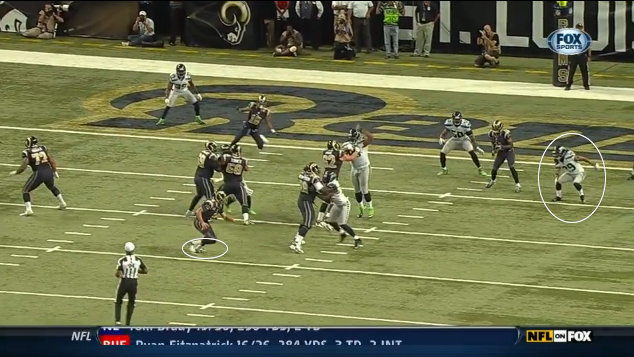 The next part is less tactically amazing and more just incredible as an athletic feat, as Earl goes from almost a dead stop to a near sack as Bradford scrambles to his right. I realize the angle is a bit weird here, but I've used the arrows to illustrate where the two will meet in less than two seconds. Earl covers about 15 yards in that time (taking into account he's moving diagonally downfield). 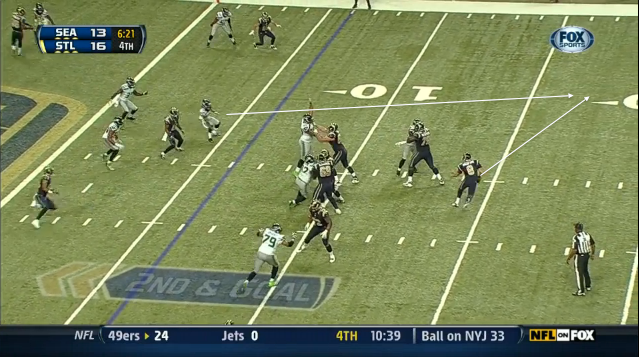 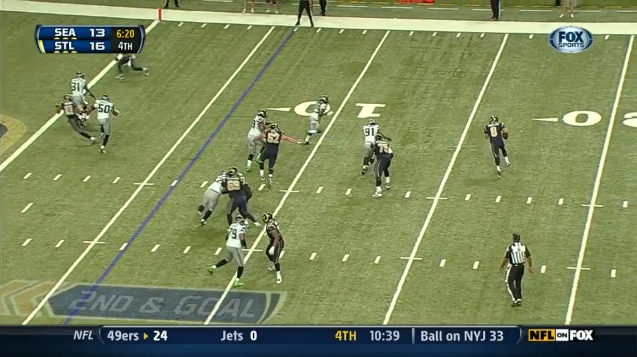 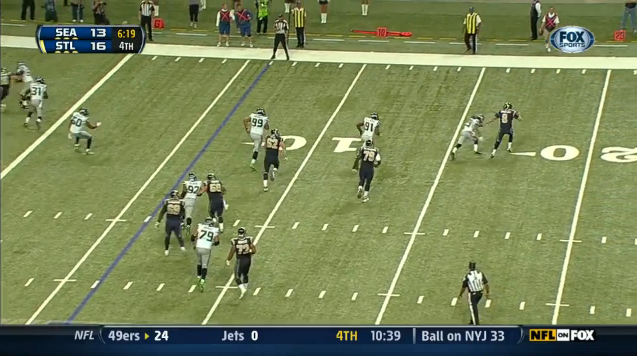 Earl's incredible start/stop speed and acceleration forces Bradford to throw the ball out of bounds and the Seahawks escape one play later by forcing St. Louis to three points. Seattle was still in the game - down six - with plenty of time to move down the field and score.

Earl is good. Watch it again.