A quick early look at the Seahawks 2013 Draft (offensive side)

Because it's always NFL Draft season in my world.

Share All sharing options for: A quick early look at the Seahawks 2013 Draft (offensive side)

To start off -- the Seahawks will likely draft nine or ten times in 2013. They currently have nine or ten draft picks -- depending on how the Barrett Ruud deal develops. They have drafted nine times (2010 and 2011) and ten times (2012) in John Schneider and Pete Carroll's administration. I think it is a good assumption that they draft nine or ten times in 2013. I personally believe that they will draft five times on offense and five times on defense, with the early rounds tilted more toward the offensive side of the ball. The offense as it stands is currently (1) worse than the defense, (2) more expensive than the defense, (3) has some players that are aging (Michael Robinson, Leon Washington, Paul McQuistan, Frank Omiyale, Braylon Edwards, Ben Obomanu).

Caveat before I start: The Seahawks could make a dramatic move up the board for a QB or a game-breaking wide receiver. I don't think this is impossible -- but I think if it does take place it would be because both Russell Wilson and Matt Flynn have left serious doubt in the minds of the coaches, front office, players and fanbase by season's end. Maybe they do shoot up the board for Matt Barkley, who looks like will not be the #1 pick in the Draft at this point. If they do that I think it would be more quarterback driven than wide receiver driven. Obviously, in that scenario, the Seahawks would perhaps be drafting only 6-7 times. Nonetheless, this quick analysis assumes 9 to 10 draft picks total.

If you take the QB position out for a second, I would rank, in order, the priority on offense to be:

If Russell Wilson establishes himself this year, you still would want a backup quarterback. Even if Matt Flynn either wins the starting job or is kept in 2013 as a backup (at a $7.5M salary cap hit) you still may want to invest in a #3 QB that could be your long-term #2 QB. Depending on the end of year verdict of the current QBs, a quarterback could be drafted anywhere in the Draft, from Round 1 to Round 7. I won't talk more about the quarterbacks available in 2013 -- the names are out there and you will be inundated with scouting reports on these signal callers from now until April 2013.

Wide receiver is pretty obvious, but I can see Seattle waiting until Round 2 before addressing it. Mid to Late Round 1 is not out of the question, but I don't see early Round 1, for a variety of reasons. Maybe guys like Justin Hunter, Cordarelle Patterson, Robert Woods, Darick Rogers, Keenan Allen and others could be in play. Bottom line, expect a WR anywhere from Round 1 to Round 3. Sidney Rice, Golden Tate and Doug Baldwin will likely all be Seahawks in 2013, but Braylon Edwards, Charly Martin and Ben Obomanu are all certainly upgradable. Golden is a contributor, but may not be a starting caliber player.

Offensive tackle may or may not be obvious to various fans, but the play of Breno Giacomini goes beyond the personal foul penalties. He isn't that good in pass protection and is getting paid above $2M per year in 2013. With James Carpenter seemingly the Left Guard of the Now and Future, Seattle needs a starting right tackle at best, or a nice young swing tackle at worst. I could see a tackle being drafted anywhere from Round 2 to Round 4 in 2013. They may or may not start in 2013, but should hopefully start in 2014 at right tackle.

Tight End. Zach Miller is a good player, but is becoming more and more expensive from a cap perspective. I still think he will be around in 2013, even at a $9M+ cap hit. Who knows the future of Evan Moore -- who has yet to catch a pass as a Seahawk and is only signed for one year at $1M. Anthony McCoy is far from horrible, but more talent and depth needs to be added to this group. I can see a tight end anywhere from Round 2 to Round 5 for the Seahawks in 2013. Gut says more Round 3 or Round 4. Perhaps bottom of Round 3 or early Round 4.

Running back or fullback. I like Leon Washington, and surely Leon has gas left in his tank. Plus, Leon only totes the rock as a RB twice per game. He isn't taking a lot of offensive hits. I also like Mike Robinson as a locker-room leader and special teams presence. These players don't break the bank, but they are both paid over $2M from a salary cap perspective. They are also in the 29 to 30 year old range -- which is a downright senior citizen on the Seahawks. As painful as it sounds, 2013 may be the time to replace one or the other as more of a budgetary procedure, not just for 2013, but also 2014 and 2015, because a younger defense will likely become more expensive as rookie contracts expire. If a running back or fullback is drafted -- I expect this to be a Round 5 to Round 7 type area move. 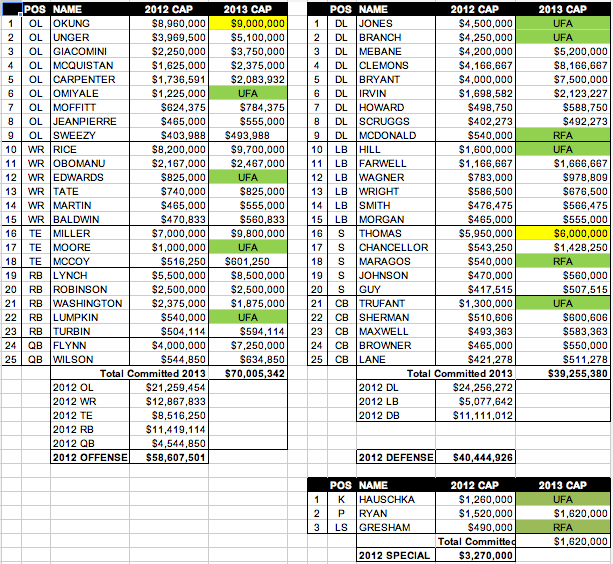 More on the defense later...