Last week, I talked about protection schemes and how they respond to blitz looks. In order to keep that simple I left the D-line out so that people could focus on the main idea of protection in a less complex setting. However, in football, pass rushes are hardly ever just straight up man-to-man attacks in true passing situations. An offensive line must be aggressive but also patient at the same time. It's a balance that comes from experience and good film study.

To the naked eye, rushes happen so fast that they look like a battle of chaos and luck, but if you get the chance to watch a particular rush over and over and see all the moving parts that make it work, it's really amazing. I think any football fan that wants to learn rush execution should take the time and watch plays several times; let the rewind button become your friend.

What I'd like to do here is run you through a couple basic plays and demonstrate execution with a pair of diagrams. After that, I will walk you through Bruce Irvin's game-clinching strip-sack from Sunday against Carolina, and show how execution allows Irvin to get to Cam Newton untouched.

Two terms you will hear a lot in talking about the defensive fronts are 'stunts' and 'twists.' Depending on who you ask, these terms can be somewhat broad or specific. And depending on the scheme, these can be complicated or simple, as well. Usually when you see a stunt or a twist, there is a blitz being shown or brought.

Twists are hard to define, depending on the scheme and who you ask, you can get many different answers on it. I've heard it described as a rush with tackles and ends exchanging positions to just the two defensive tackles exchanging rushes in the A gap. So for me, I'm probably going to avoid this term as I don't have enough understanding of Pete's schemes to know how this kind play would be utilized.

Stunts are really any time you see a lineman pull off of his man and head for another rushing lane. This is usually designed to hide the rusher and you'll see a great example in the Irvin sack. They also often call linebackers showing blitz but not coming a stunt as it "stunts the growth of the pocket."

The following diagrams will show what a beautiful science pass rush is. 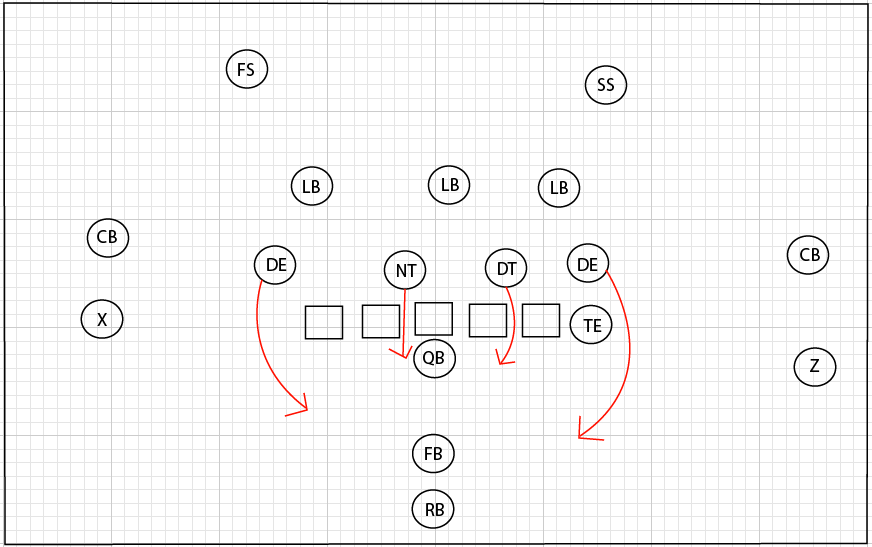 This is a vanilla 4-3 base rush. It's designed to control both the run and rush the passer in the most basic way. The nose tackle (NT) will play the gap between center and guard and control both the run and allow the defensive end a 1-on-1 to the outside of the tackle. He is your key player in a lineup like this because he must be able to force the double team by the center and guard. If he cannot do this well enough, your team will be run on a lot to the inside.

The second key is the defensive tackle on the strong side (DT) taking on the outside shoulder of the guard. If he's quick enough, he can force the tackle to try and help his guard, giving the strong side defensive end a better jump and rush lane to the QB. It's all about execution and timing. If the NT gets off the ball fine, but the other DT mistimes his burst or his angle is sloppy in the gap, everything gets gummed up and the line picks the rush up much easier. It really only takes one guy not doing his job to ruin a good rush, just like it takes one o-lineman missing the call for a protection change to let a defender come scott free. 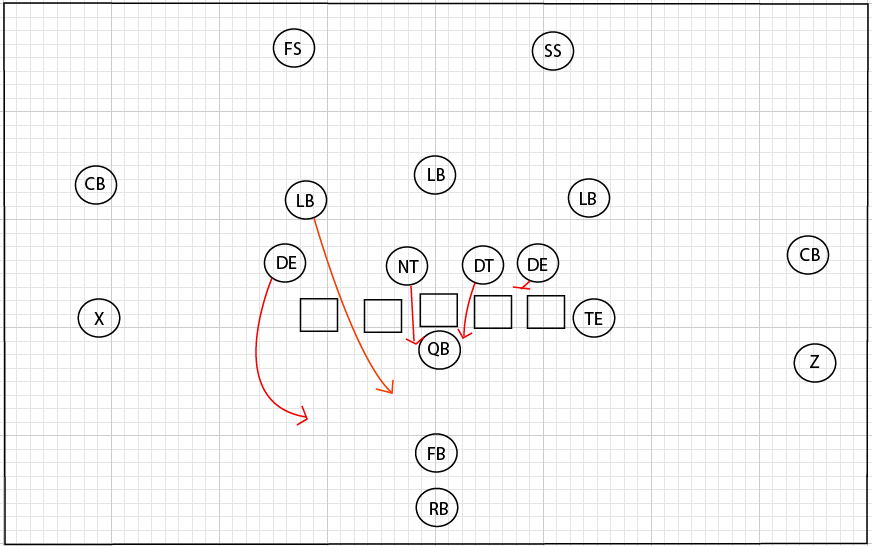 These are my favorite type of plays to watch, and examine intricacies of rush timing and execution. Pete Carroll and Gus Bradley are really good at designing rushes and, and one of my most favorite things to watch on replay of late has been just how things are done on the rush specifically. It's quite interesting.

This diagram here is a pretty simple design, for those of you that remember. This look above was what gave Leroy Hill 3.5 of his 7.5 sacks as a rookie -- a 4-3 OLB blitz. The key to this play is the NT playing his guard/center gap again. This time though, the defensive end to the weak side will try and move the tackle to make a lane for the OLB (in this case, Leroy Hill). The line can't respond easily because the defensive tackle has also attacked the A gap on the strong side -- this will prevent the line from being able to slide protect and pick up the blitz. The DE on the strong side will crash the guard tackle gap meaning that sliding to pick up the blitz will be near impossible, and the OLB (Hill) will now have to be left to a back.

Leroy Hill has to be both aggressive and patient at the same time, to make sure he gives himself the best angle of pursuit and can clear the back who is likely going to come pick him up. The defensive line must be disciplined and well-timed as well. If anything gives the blitz away, the opposing offense can basically pick this blitz up easily. This look on the D-line, without the blitz, also became popular when the Seahawks realized how well Rocky Bernard got off the ball -- and a good 2-3 sacks came on late pressures on the line just like this.

This is a four man rush, but the 'Hawks leave the center completely uncovered, so at the snap, the line features Chris Clemons vs the Carolina LT, Alan Branch vs the Panthers' LG, Jason Jones vs RG, and Bruce Irvin vs RT. 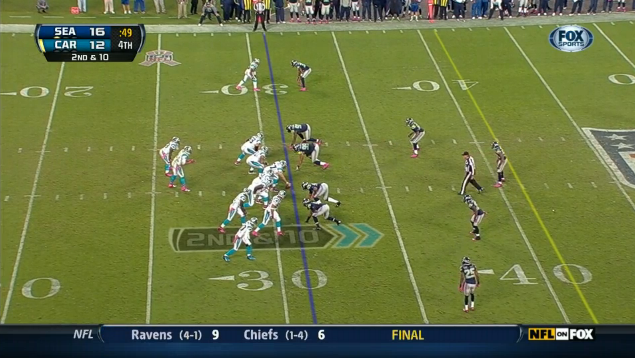 Below, you'll see the snap occur, and the process of execution begin. Jones slides under Irvin's stunt and squares up the RT, but the guy that makes this go is #99, Alan Branch.

Branch gets off the snap like a runaway beer truck and slams into the center. 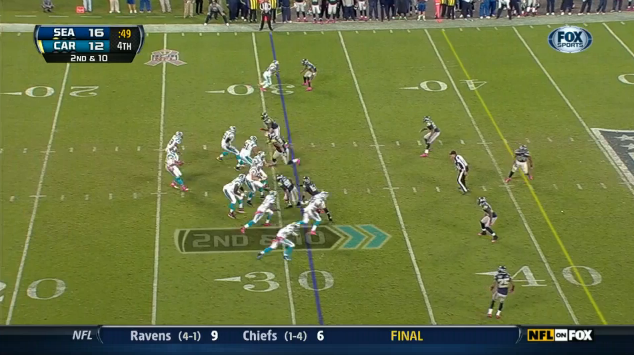 You see in this photo below that the LG has blocked down to repel Branch. Irvin is, in effect, completely hidden from that LG as he is fully engaged with Branch. Both Jones and Clemons are knocking back the tackles. This leaves a quality lane for Irvin to run through. Also note that the right guard's head is turned toward Jones so he seems to have completely missed Irvin as well. 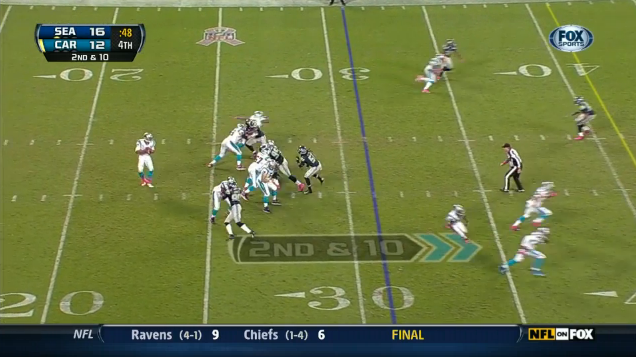 The LG, by this point, is completely had; by the time he realizes Irvin is there, it's far too late for him to get a good angle on a block. He attempts to go wide and Irvin shrugs him off for the sack. 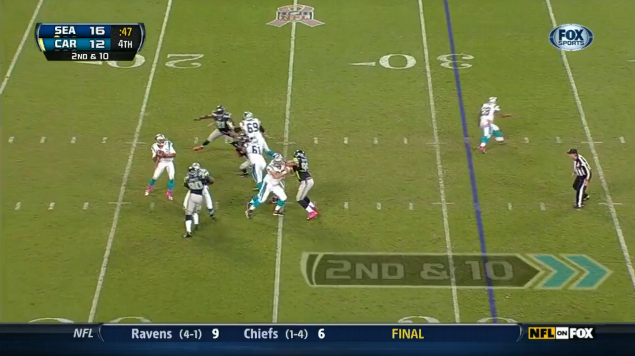 This entire process is pulled off without a blitz concept or anything super tricky. The panic of the line actually leaves Alan Branch engaged with three blockers simultaneously and unnecessarily, and that's where the pocket starts to collapse. Though in the process of the sack it looks like just two guys are with Branch, don't forget that the LG came to Irvin late in the play. Both Jones and Clemons collapse the tackles and it's a boat load of Cam Newton for lunch.

This whole play is made by Jones and Branch having great speed off the snap, which gives Seattle the ability to hide Irvin away; if either of them struggles or gets stood up, there's a slight chance this gets blocked enough to make a completion possible. But, timing and execution is perfect and the Panthers o-line shrivels up. I've watched this play 20 times, it's only gotten funnier and funnier to watch the line panic on such a simple look. 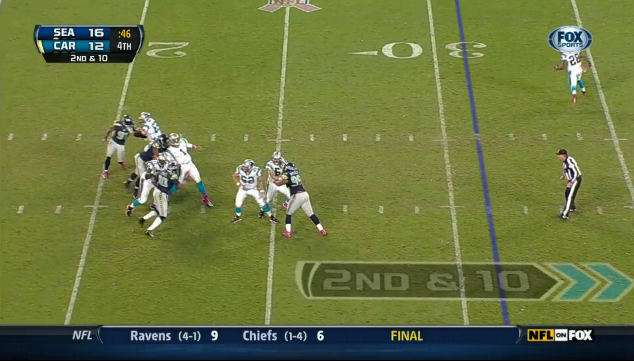 Here's a gif of the end of the play. Note Irvin's hand use and leverage. Game over.