The Seahawks and the screen-pass

Share All sharing options for: The Seahawks and the screen-pass

In a recent article published here by Davis Hsu in which he was exploring some of Pete Carroll's philosophies, Davis pointed out a presentation given by Seahawks' Defensive Passing Game Coordinator Rocky Seto while Seto was still on Pete Carroll's staff at USC. In that presentation, Seto spelled out the emphasis that the coaching staff puts on 'the explosive play.' Per Seto:

"A recent unpublished NFL Study conducted in recent years again concluded that giving up explosive plays (+16 in the passing game, and +12 in the running game) has a major effect on determining the outcome."

"Give up either an explosive run or pass play in any given drive and the opposition will score over 75% of the time for the period studied."

As Seto put it then -

"Sorry math and stat phobes, USC coaches both track and hang their hat on this notion, and it is the #1 base principle for secondary play. USC annually leads the Pac-10 in not allowing big plays on defense."

Conversely, naturally, the Seahawks also hang their hat on the explosive play on offense for the very same reasons, and this is something that Davis is going to break down in great detail soon. There are a lot of statistically based reasons for this philosophy, which I won't get into now and allow Davis to explore, and it's easy to see this emphasis on the 'exploive play' manifested on the field by this Seahawks' offense, but I also think Carroll and co. believe in the momentum and energy boost these plays provide for an offensive unit.

One great example of this notion came on Sunday, with 5:11 remaining in the first half, when a Marshawn Lynch screen-play catch-and-run netted the Seahawks 27 yards and some much needed juice.

The play itself meant a lot to the offense, which had stalled badly, looked downright bad for much of the first and second quarters, and frankly, was looking for answers. Let's take a look at the possessions which followed Seattle's opening drive, a three-play possession that ended in a Golden Tate touchdown.

Three and out with a net of -1 yards after a Jeremy Lane procedural penalty forced the Seahawks to punt from their own 39. Run, run, pass, punt.

Oy vey. Two sacks, and Wilson coughs it up on the 2nd one for a Jets recovery and return touchdown. The Jets, despite their shaky start to the game, are now in a groove defensively and are getting a lot of pressure on Russell Wilson. It's working. Score now tied at 7-7.

Seahawks get nice field position on their next drive. After picking up a first down, they have what looks like an encouraging drive going, but Marshawn Lynch fumbles and it's recovered by the Jets.

Richard Sherman bails out Lynch with a goal line pick but Seattle has to now fight out from behind their own 5-yard line. Darrell Bevell plays it safe and calls a couple of Lynch runs but those two set up a 3rd and 4. Wilson is again sacked and rather nearly calamitously fumbles again from inside the 5. Thankfully, Robert Turbin lands on the ball after it squirts out past the offensive line. Wilson is struggling badly at this point, and the Seahawks aren't getting any traction in the run game whatsoever.

On Seattle's next possession, after another fine defensive stop by the defense, Bevell and the Seahawks just completely abandon the passing game in order to attempt to get anything going on the ground. On 3rd and 2 though, Lynch is stuffed behind the line of scrimmage. Punt.

Seahawks do something here that I like, particularly after a whole shit-load of conservative dink and dunk plays and run calls from the offense has gotten them nowhere fast. On 1st down, they dial up a kill shot trick play. Unfortunately, on the flea-flicker, Wilson uncharacteristically under-throws Rice by a little bit and Rice can't hold on to it as he falls into the endzone.

After a penalty on the next play, the Hawks are pushed back to near midfield and in a 2nd and 15 look. The Jets likely assume a pass is coming here in 2nd and long, and frankly, after the previous few possessions (three sacks and a forced fumble), there is the metaphorical blood in the water for the sharks on their d-line. They'd spent the week prior giving boastful predictions of rattling the rookie QB, and so far, they'd done a good job of it.

Again, I like what Bevell does to combat this - similar to the how a 'trap play' is meant to function, well-executed screens can exploit an overly eager or aggressive defensive line, and the Seahawks just barely manage to get just such a play off.

However, Russell Wilson, after holding his gaze and pumpfake to the right side of the field possibly just a tad too long, flicks it out to Lynch before getting demolished by three oncoming Jets defenders. The Jets' intense pursuit of the quarterback, though, leaves the entire left flank of the defense wide open for Lynch, and a downfield block by Max Unger springs the Beast.

The one thing I didn't originally notice about this play though is the excellent head and pump fake that Russell Wilson managed to execute, moving the safety to the playside all the way over to the wrong side of the field. See below:

Wilson's head and feet are circled and his body positioning and eyes sell the fake toward the right side of the field extremely well. Rookie LB Demario Davis and S Yeremiah Bell are the key players to watch here. 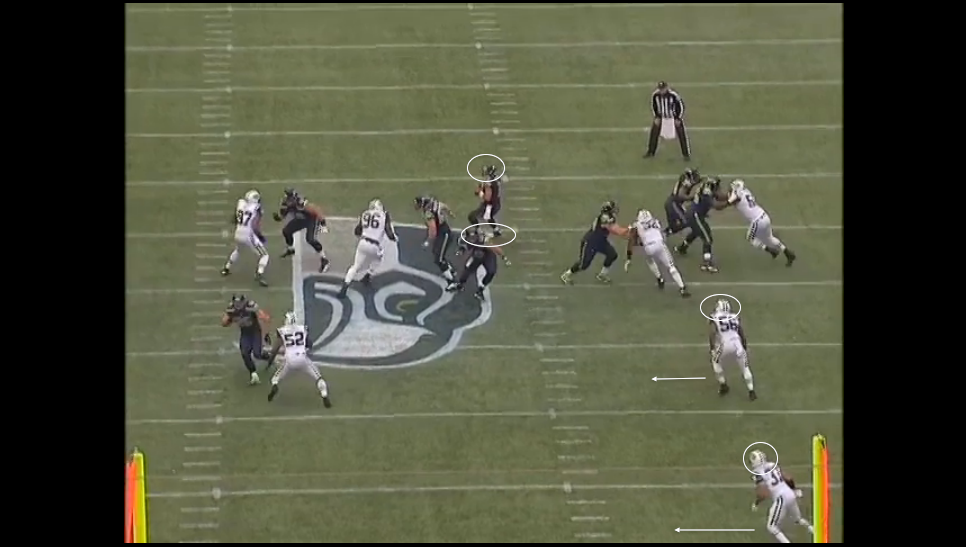 As Wilson sets up to throw to the right, where Sidney Rice, Doug Baldwin and Zach Miller are headed, both Davis and Bell bite hard in that direction. 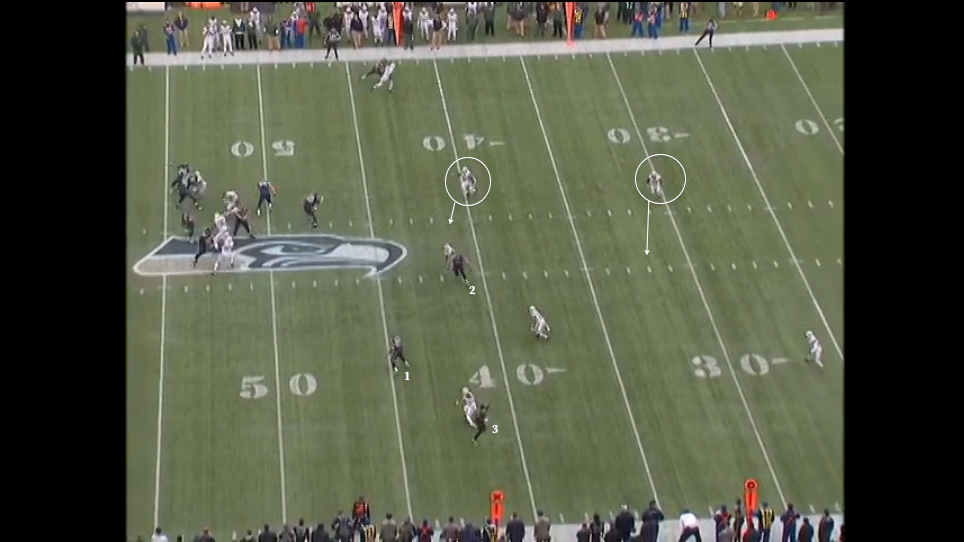 As Wilson turns to dump it off to Lynch, Coples is coming in hot, so he's forced to flick it out immediately. It's a close play, but Wilson does a good job of getting it off before getting hammered. #56, Davis, recovers fairly quickly when he sees Wilson turn and flick it, but Bell is caught looking to the receivers to the right side, and he drifts that direction even well after Wilson has turned his attention left and even after he's gotten rid of the ball. 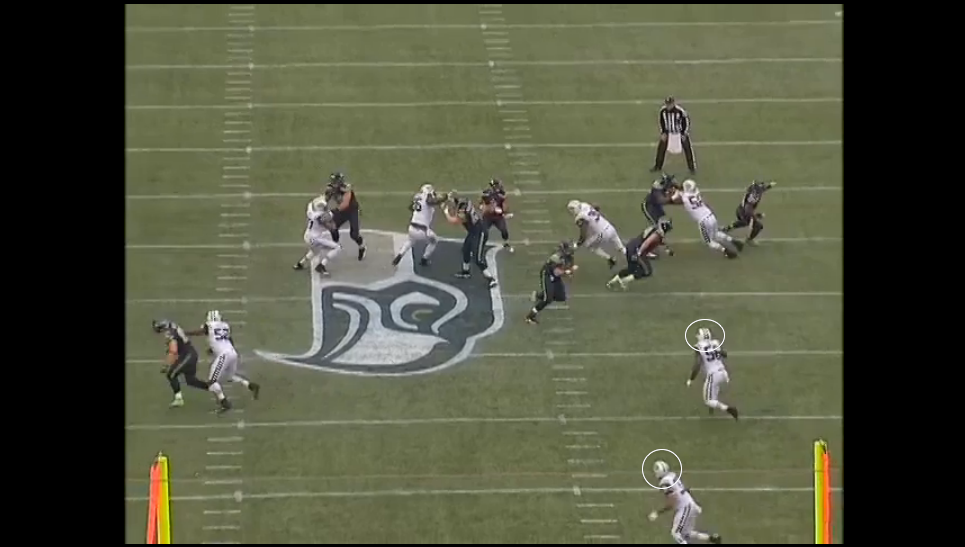 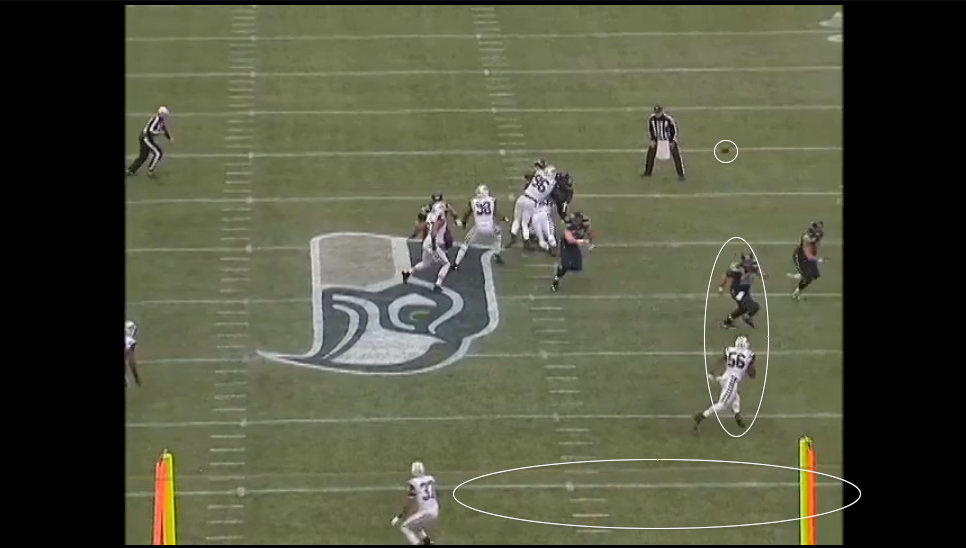 This simple head fake - Wilson moving the safety with his gaze - leaves the whole left side of the field wide open, which helps Lynch to a huge gain. 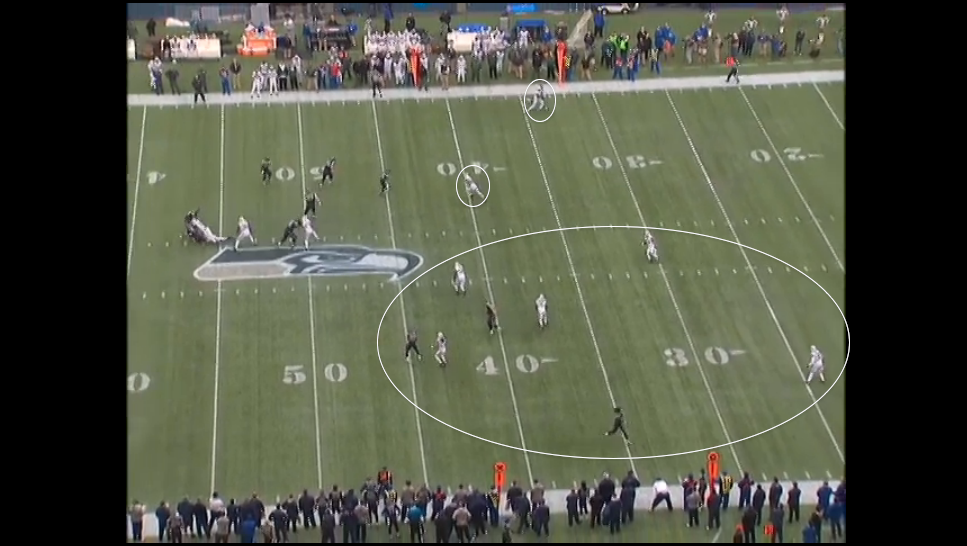 Watch it again in live speed:

Both gifs courtesy of the always excellent BigTrain21!!

The Hawks would go on to score and this explosive play helped give them the much-needed kick in the pants they were needing on offense.

In general, I'll be looking for the screen pass to possibly become more of an option as the Seahawks face teams that mean to get a lot of pressure on Russell Wilson, much like the bubble screens we've seen increase in frequency. The 'screen' hasn't really been that big of a part of the playbook in the past for Seattle, but then again, neither has the read-option. As teams gear up to 'rattle' Wilson, plays like this one above become more viable and more effective.

This is a sponsored post for the release of Call of Duty - and we were asked to provide strategies that the Seahawks may use in the coming weeks to combat issues they've been having. I think plays like this will be important in this.

Check out the trailer for Call of Duty Duty, which is available now at Best Buy