Welcome back, again. If you missed the previous two posts on this topic, please give Part 1 and Part 2 a read first.

Last time we were here, we covered a little bit on how the overall run blocking scheme works, while also touching up on some of the scheme's aspects in play-action and inclusion of a second TE. Particularly, I highlighted two plays that showcased the dominance of the ZBS when successful, and most importantly, why it works in the way it is structured.

With the bye week coming up, I wanted to revisit a lot of what Cable brought in with with not only his philosophy, but his coaching. I felt that my past two articles only put up the 'tip of the iceberg' in terms of explaining everything Cable runs, and after looking at a lot more Seahawks film, I definitely feel more comfortable in explaining the general rules. To recap what we have said:

- The Zone Blocking Scheme is designed to create no-loss running plays. What this means is that while a play the RB runs may not net a large gain, it is still a positive gain. The routes, the blocking scheme - these are all factors in creating situations that limit carries for loss of yards. This is particularly important in defining the success of the playbook, because the offensive line (OL) has to be effective in working together and the RB has to be smart and confident.

- There are two different distinctions of ZBS - Inside/Tight Zone, or Outside/Wide Zone. While both may be different in play selection and design, their philosophy remains the same. Namely: The RB must take one-cut and go, the OL must work together as in making the correct blocks, based on formation, and the QB must finish their rollouts on EVERY play.

- As suggested by its name, Inside/Tight Zone is a formation designed for plays run between the tackles. These plays are also designated cutback runs - it is also the RB's responsibility to understand where the cutback lane is, based on a pre-snap view. Tight Zone is also unusual in that the FB usually lines up in the opposite direction of where the RB will run. Backside guys on a Tight Zone plays has to be crucial in blocking for the anticipated cutback.

- Outside/Wide Zone, in contrast, is a series of outside, one-cut sweeps. Note in particular that these are not runs designed to go towards the sidelines, but rather runs designed to move towards the sidelines before cutting into a up field lane. Whereas inside zone can be categorized as a misdirection, outside zone is one direction of the play either way. Backside guys on a Wide Zone play cutblock their players to take away backside (opposite of play-side) pursuit of the run.

- The offense must be good in disguising both their Wide Zone and Tight Zone, intermixing different personnel and formations within the playbook.

- It is crucial for the RB to be coached - not only does he has to commit to the rules of of the scheme, but he has to be taught how to make the correct read.

- It is even more crucial for the OL to function together as a unit. Since they will usually be tasked with performing double-teams or quick blocks, athleticism and tall, lean players are favored over pure, plodding maulers. The interior three lineman must also be intelligent in communicating the correct formation and blocking scheme. As Gibbs once said "It's like you're married to him."

- Motions and the inclusions of two TE sets keeps the playbook open and flexible. Part of the reason why we see a lot of motioning is to overload the formation to one side right before the snap-count and to get more double teams into the fold. This also a great setup for wide zone runs and screens.

Now that we have most of the basics covered, let's dive into more serious and the general rules that this offense is meant to abide to.

The OL: The Three Commandments 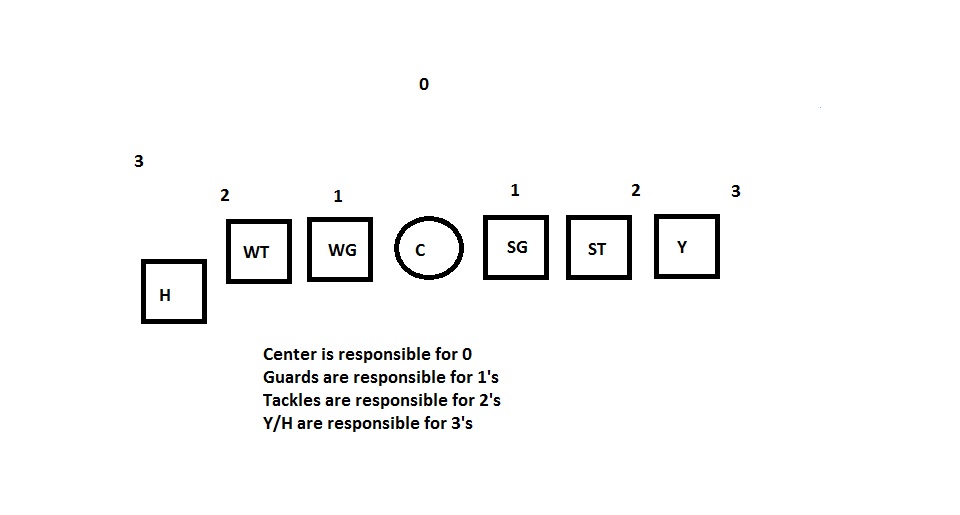 Now you may ask yourself, what happens when there is no one on a particular lineman? After all, it would be quite rare for the defense to always come out with 7 men in the box with only a single linebacker in the middle. Well, Cable and Gibbs also have some rules for that:

"If you are UNCOVERED, zone with your teammate to the playside. If you are COVERED, look at your backside (away from playside) teammate. If he is COVERED, you will block your defender man-on-man. If he is UNCOVERED, he will double team/combo block with you towards the LB.

As a visual learner myself, I understand that these rules may be too complex in abstract. Let's look at it from a real-life example: 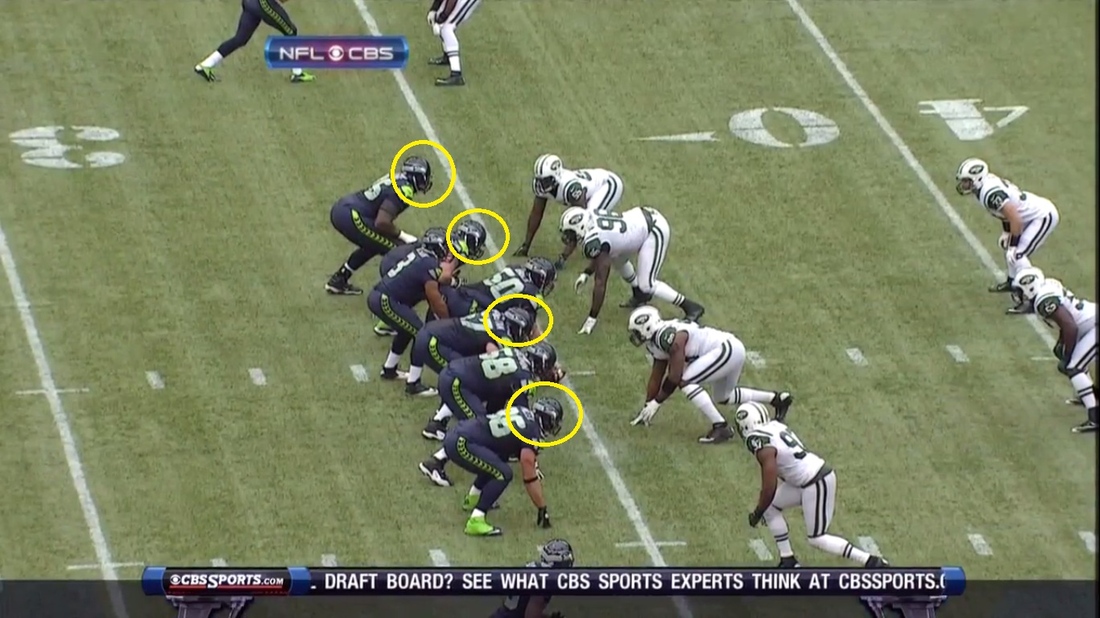 You can see here that Okung, McQuistan, Moffit and Miller are covered with the 2, 1, 1, and 3 defenders respectively. This means that, if the play was called correctly, the four players above will man block, while Unger and Giacomini will help block in the next level. The result of the play should then, following the rules, look like this: 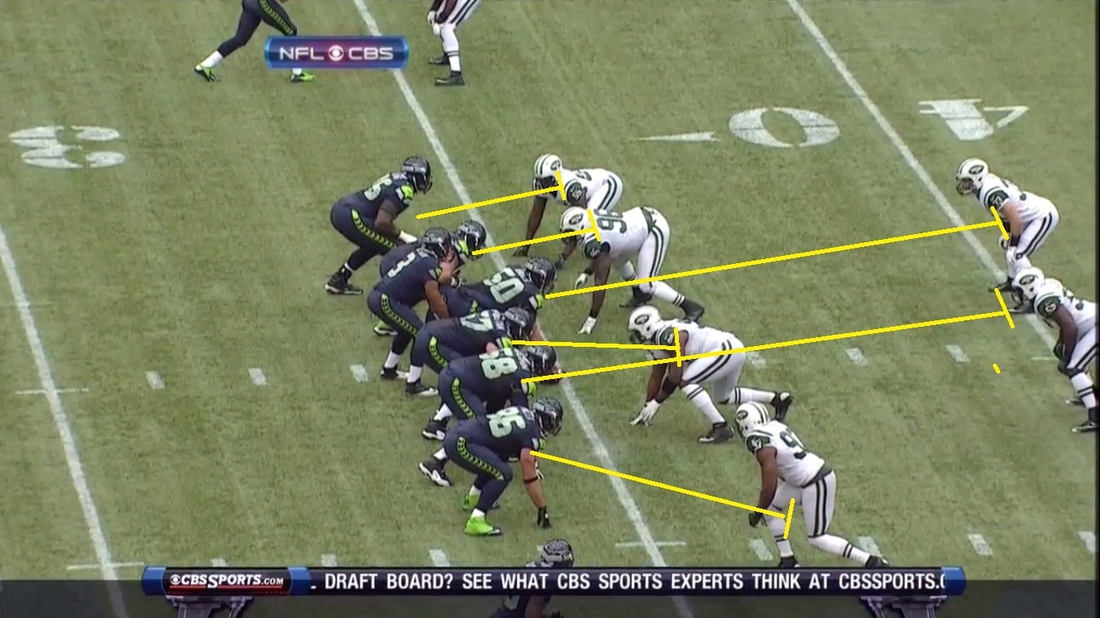 (It is important to note that Giacomini still has the #2 responsibility. Since he is uncovered, he will technically zone with McQuistan on the right side. However, the OLB is still playing the #2 gap - just 5 yards deeper than he should be. So McQusitan will double team the DT before going up against the LB.

The film shows Giacomini seemingly just busting out of the gate and blocking the LB, so it would be easy to call this a mistake by Breno. But McQ does a good pancake impression here and the defender was already beaten before Giacomini can get a hand on him - so he didn't really need to help in the double team block.) 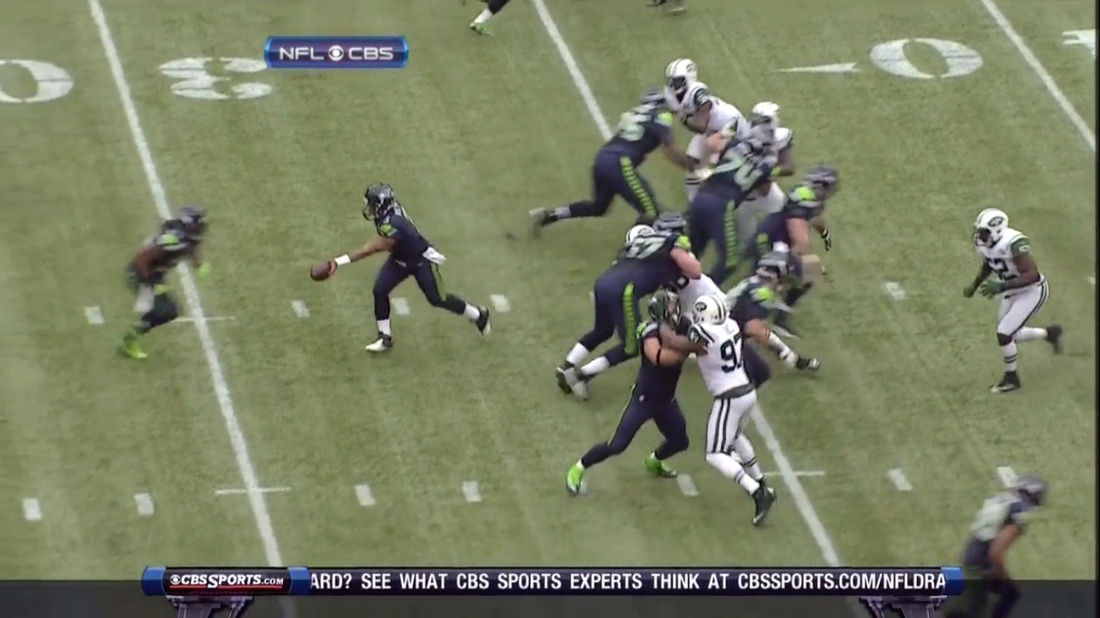 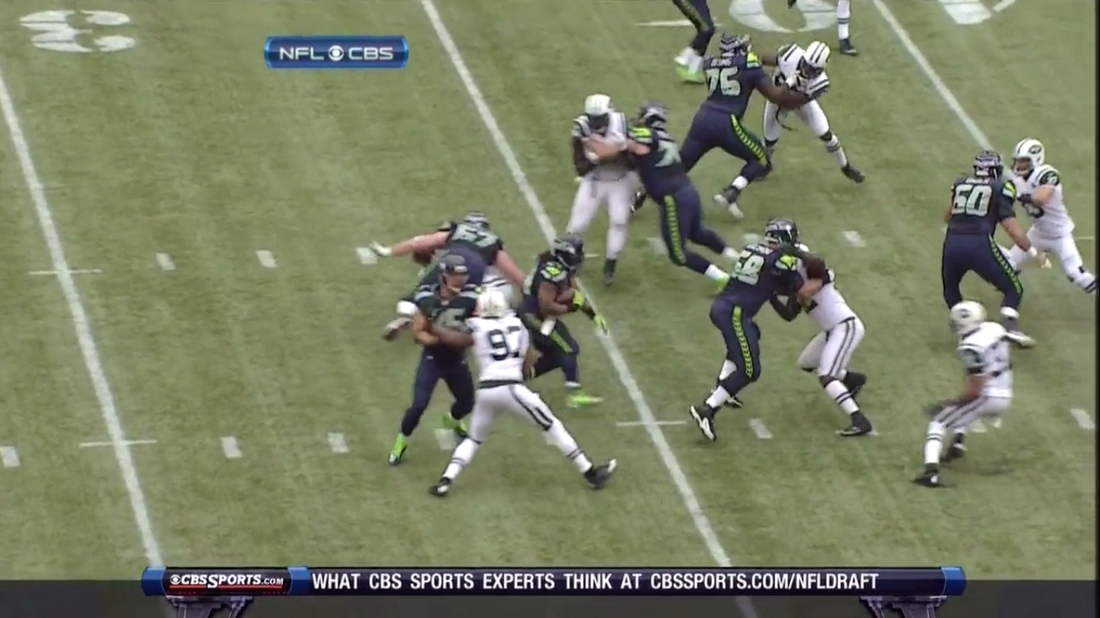 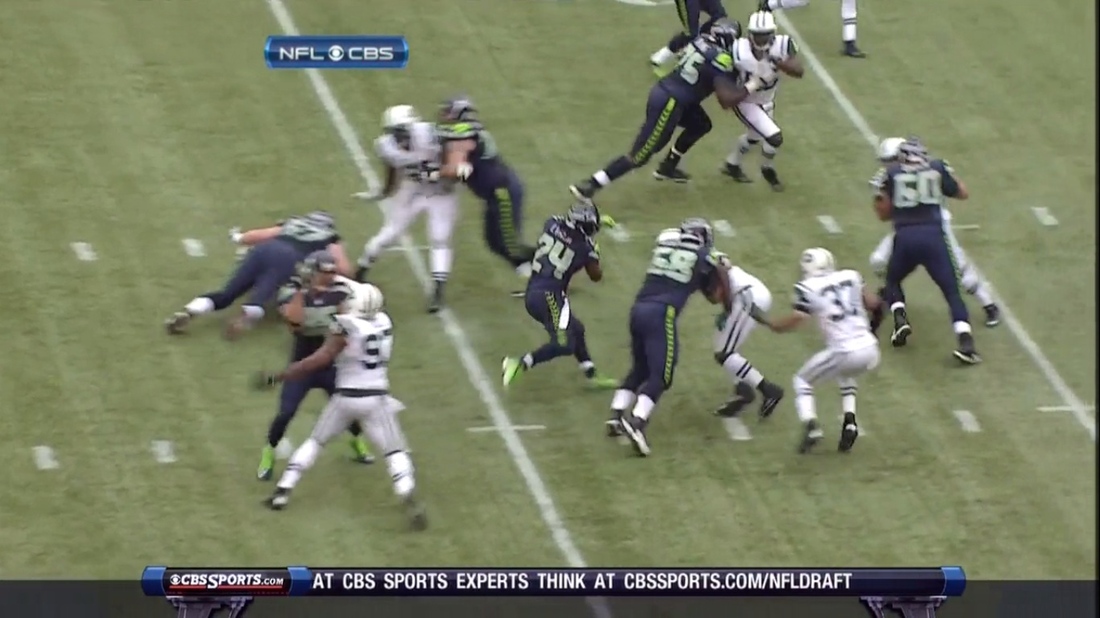 Yowza. (Bonus question: Is the play above a Wide Zone or a Tight Zone?)

I mentioned in the last article that Cable prefers running Wide Zone plays versus Tight Zone plays, but then again my last article was in the offseason and there's no doubt that with another year of experience, the playbook opened up.

Right off the bat one of the biggest changes in play-calling from 2011 to this year was the inclusion of more tight zone plays. They're aren't easy to run, as it necessitates the RB to be fundamentally sound in the paths they run (and at times, the hole they cut back to). Tight Zone is also difficult because good teams will cheat the safety into the box - which makes it difficult for the RB to get past the second level.

A tight zone play has to begin with the RB's eyes. Lynch must first analyze the position of the last weakside defender on the LOS. In most cases, this would be the DE. Take a look at this play against the Vikings, initially designed to run towards the left side... 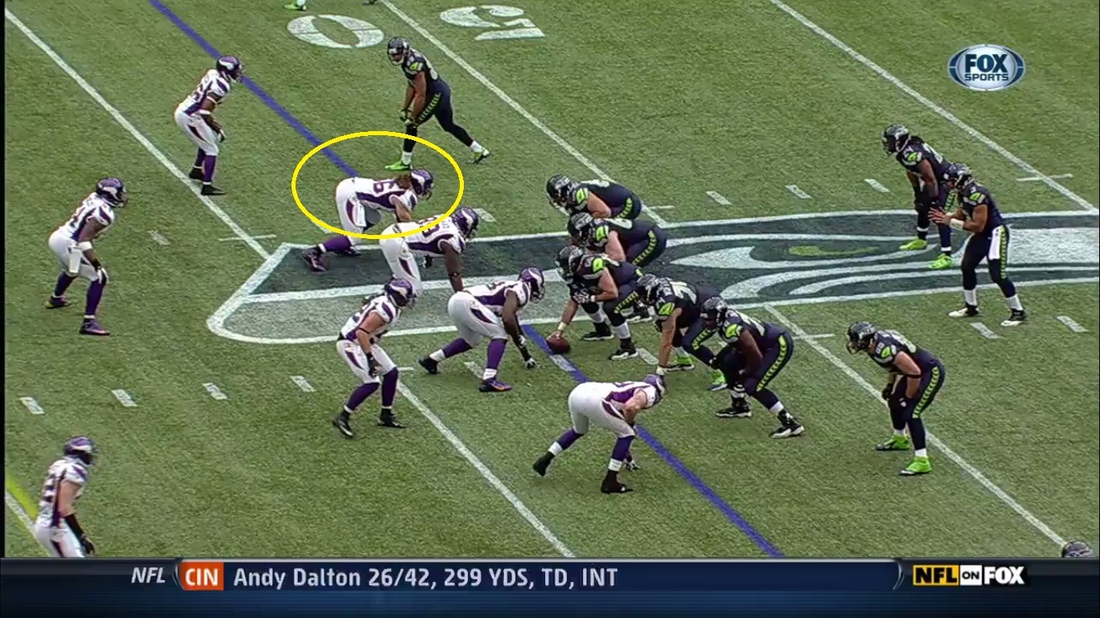 You may ask yourself "but Mike, there is no TE to the right side!" and I would say, you're right - except for the fact that Zach Miller motions in on a crack block. Also, did you notice that there actually is a TE to the right? Anthony McCoy is lined up as the Y, only motioned out; Miller is the H. 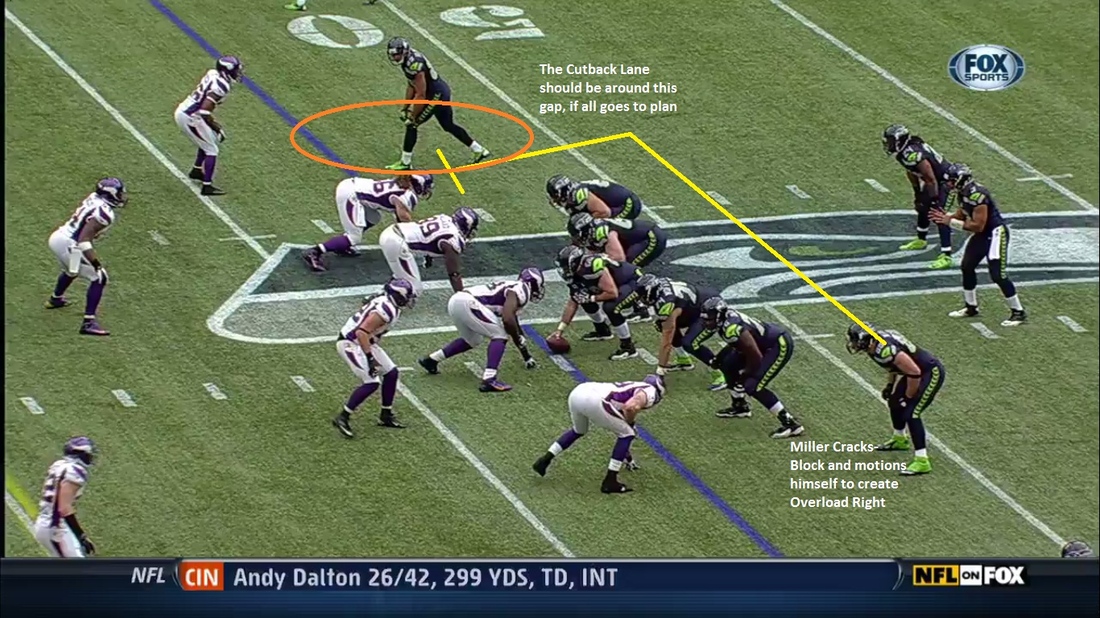 Lynch's second read is the B gap on the strength of the play, or the gap between the guard and tackle. This is the key route and opening for a Tight Zone play, because it is primarily a bubble gap in most defenses. If there is even a tight crack of daylight in the B gap, then Lynch will immediately push through it - because more than likely, the RB will get a good chunk of yardage based on the blocking and forward movement alone.

Here's a picture if y'all didn't get all that: 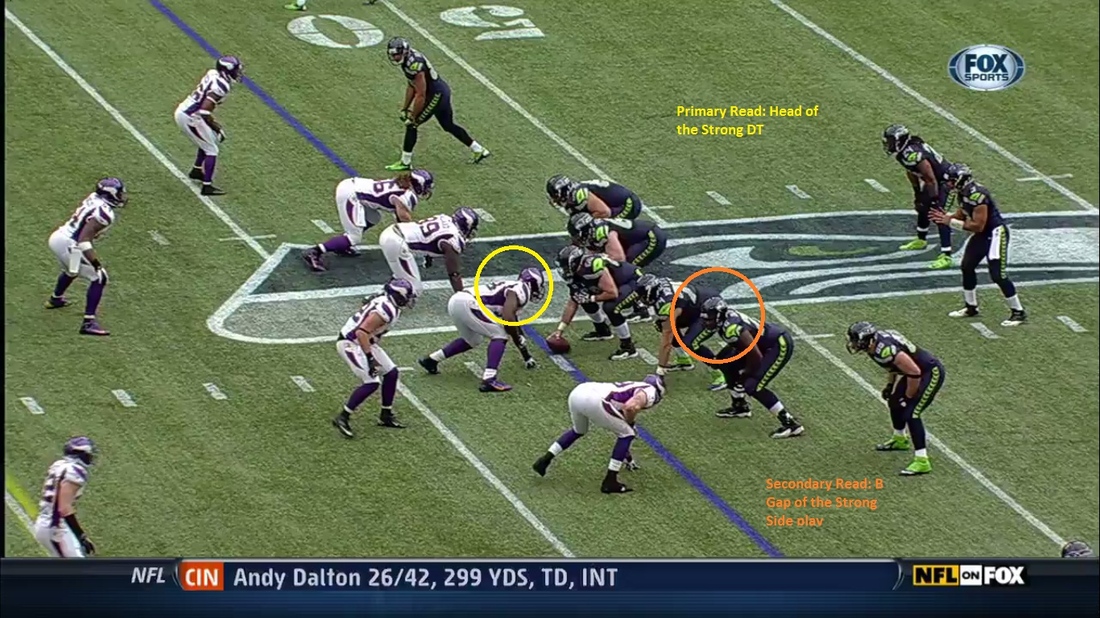 Once the ball is snapped, Lynch has about three steps in order to make both reads correctly. The first three steps are then important in setting up the read, and thus arguably the most important steps a RB has to make in terms of succeeding. The first step must always be flat and lateral with his playside foot. (I also included the OL's blocking as review) 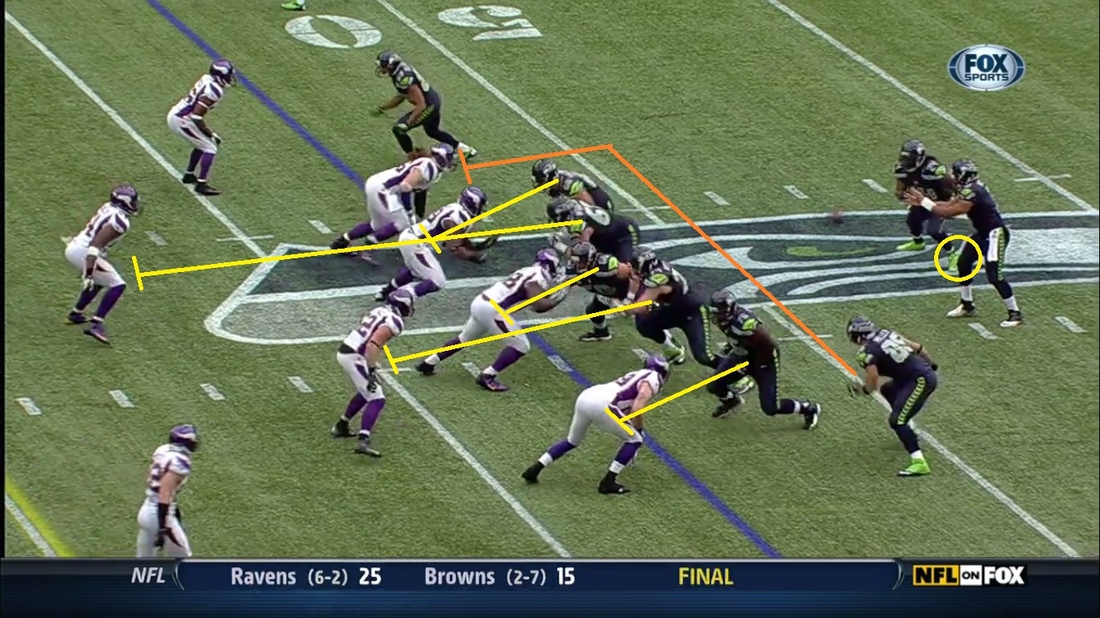 The second step must be crossover and slightly gain ground. 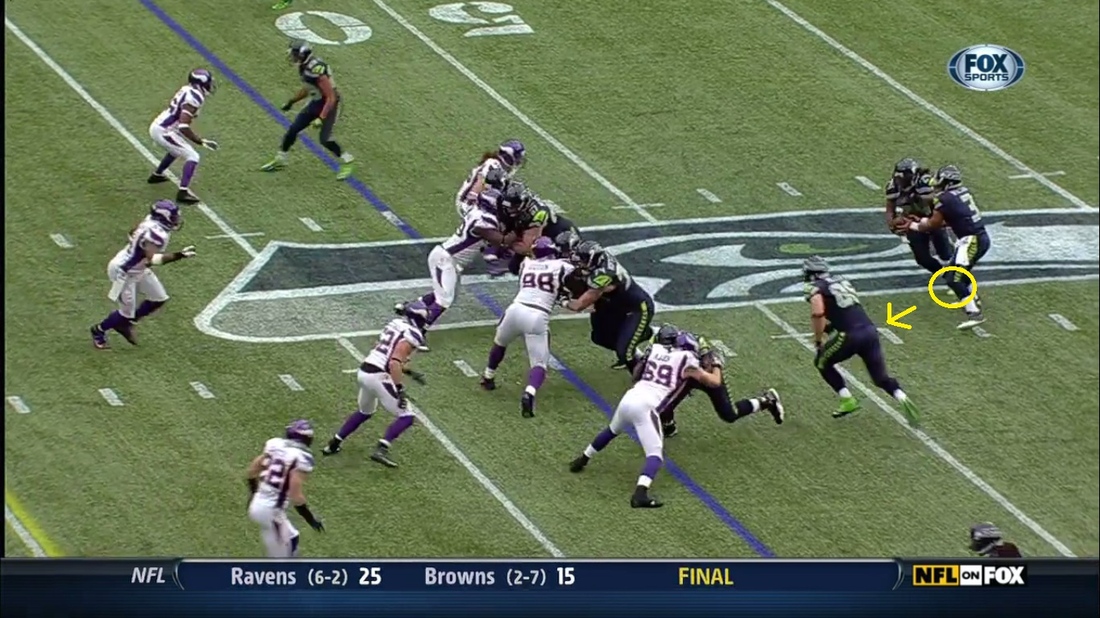 And finally, the third step squares the back and lets him get upfield. 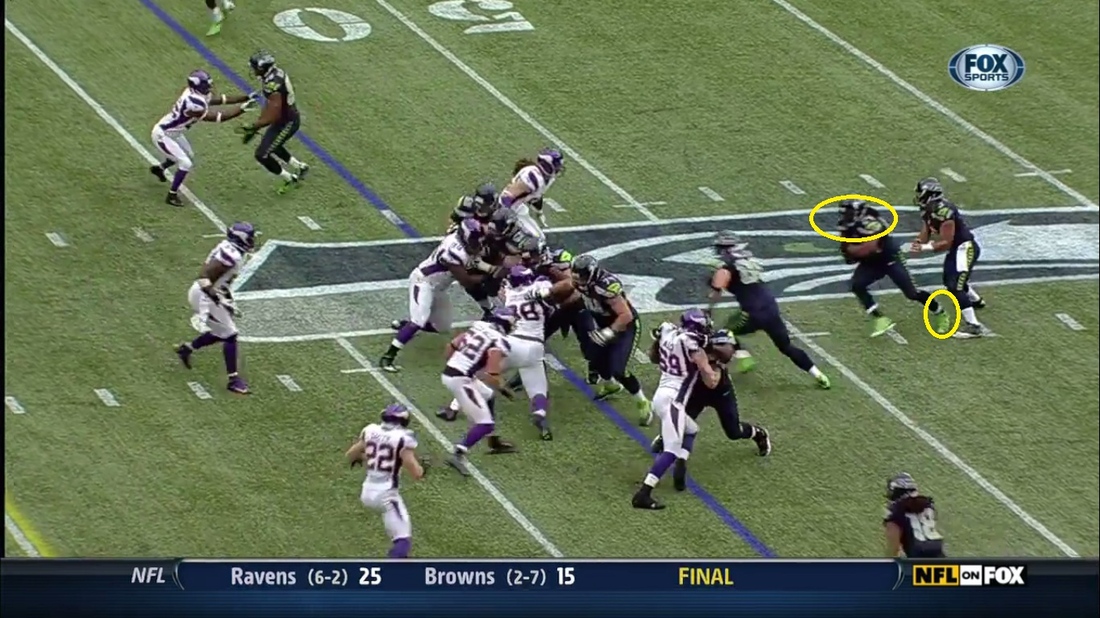 By the time Lynch takes his fourth step, his reads are already fundamentally clear. The DT is heading inside, so Lynch will end up cutting outside. The Strong Side B gap is covered, so there only leaves one other option: cutback to the outside. 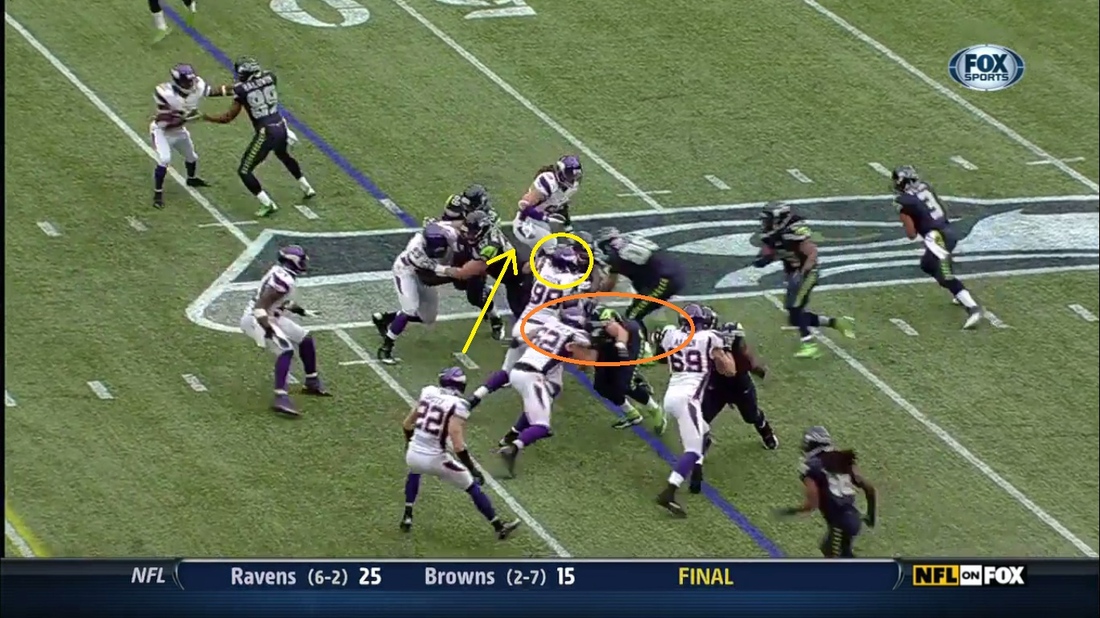 And all it takes is just one step. 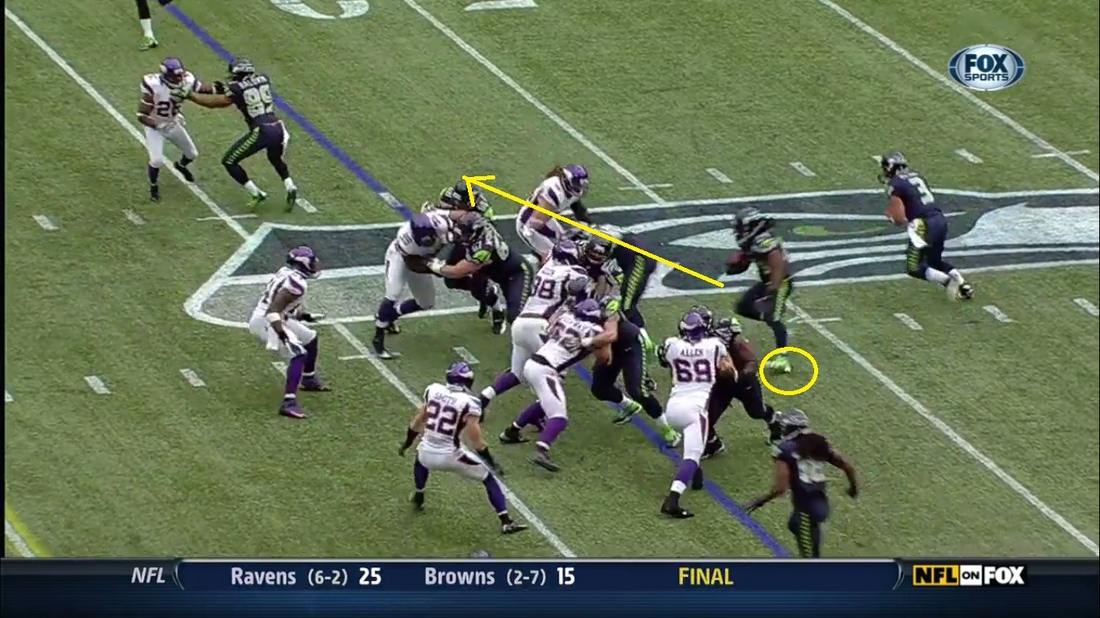 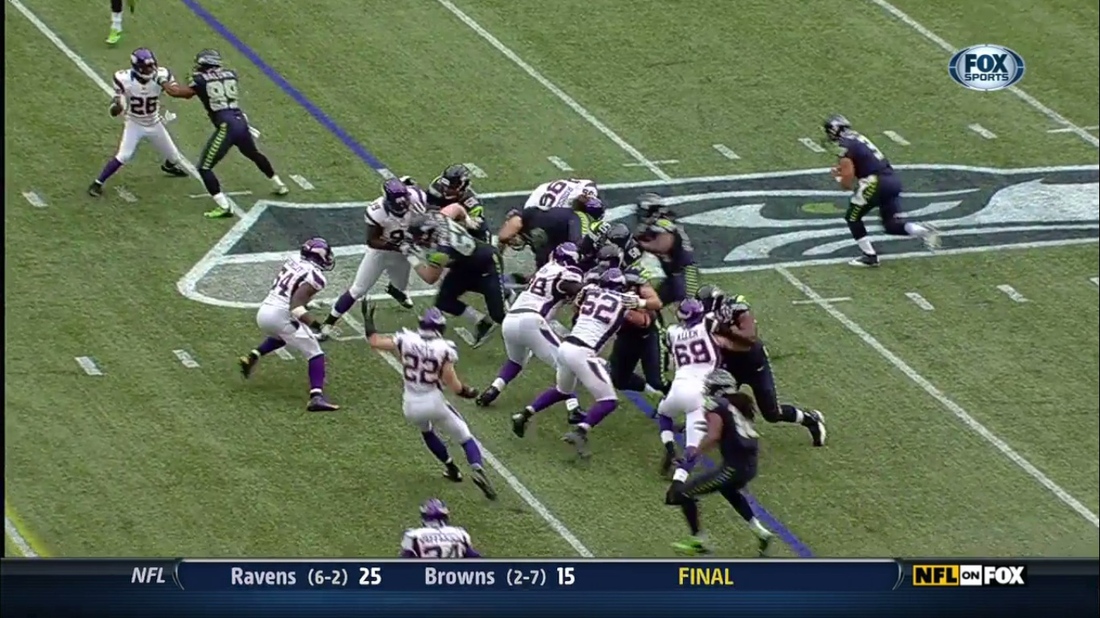 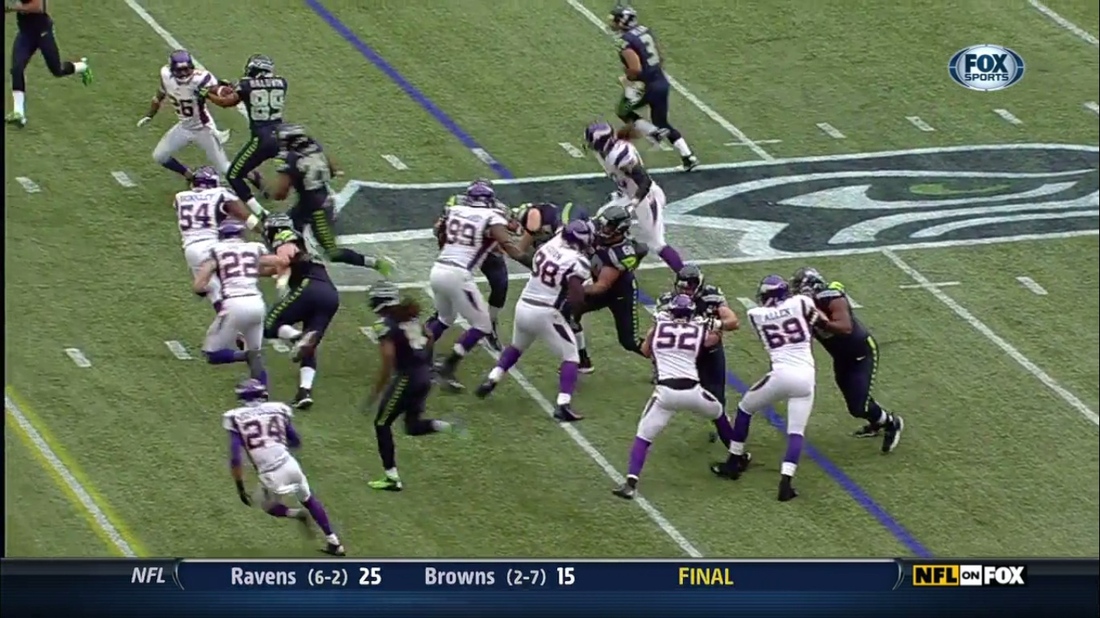 The Wide Zone: Reaching and Cutting.

As I've said previously, Wide Zone is the easiest and most versatile of the two ZBS formations. Wide Zone is also considered the "perfection" formation by Gibbs mainly because it is designed to be 50-50 in terms of running and passing, something that Pete Carroll constantly aspires to in his offense.

With Wide Zone, most of the rules for the OL and RB stay the same as it was with Tight Zone. The only major differences are that the backside OL will usually cutblock (cut) their players instead of standard blocking to protect backside pursuit, and that the RB's cutback will be much closer and shorter than it was in Tight.

Since the plays designed are a big part of play action and passes as well as runs, OL are also taught to "reach" their defenders more often. This is how you usually tell if a running play will be Tight Zone or Wide Zone. With Wide Zone, the OL can often look like a wall of opposing color jerseys with no holes on sight.

The RB also does his usual reads, but instead of three steps, he only needs to take one step backward before running upfield. Likewise, instead of reading the first down lineman outside the center, it's now the second down lineman. The cutback now will be coming across the defender's face (should he go outside with the play of course). He will be attacking and running right of the TE's butt. 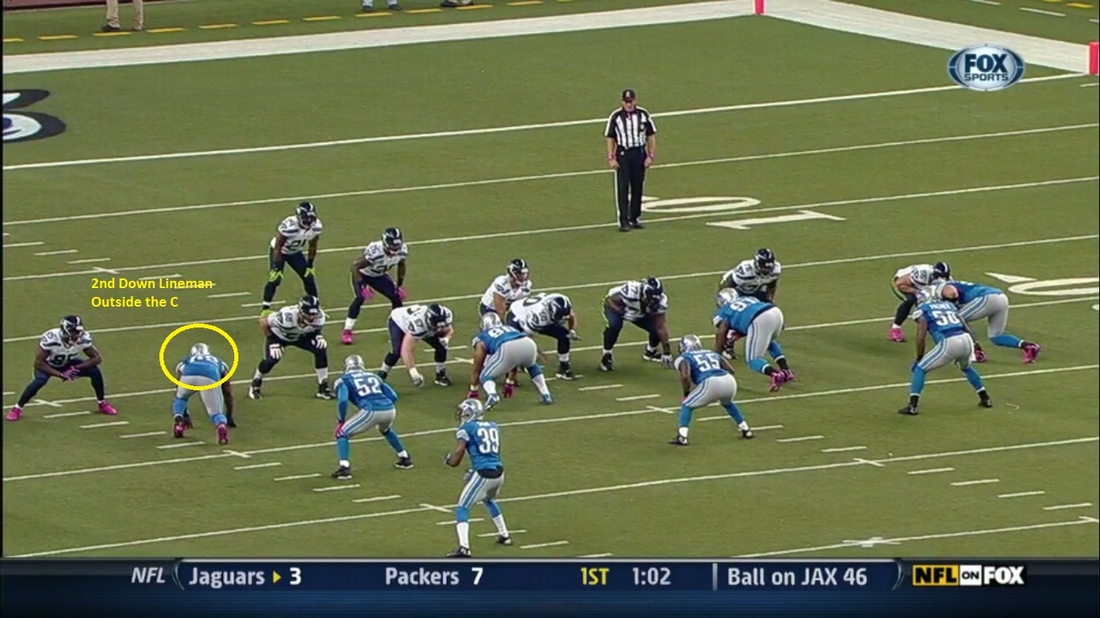 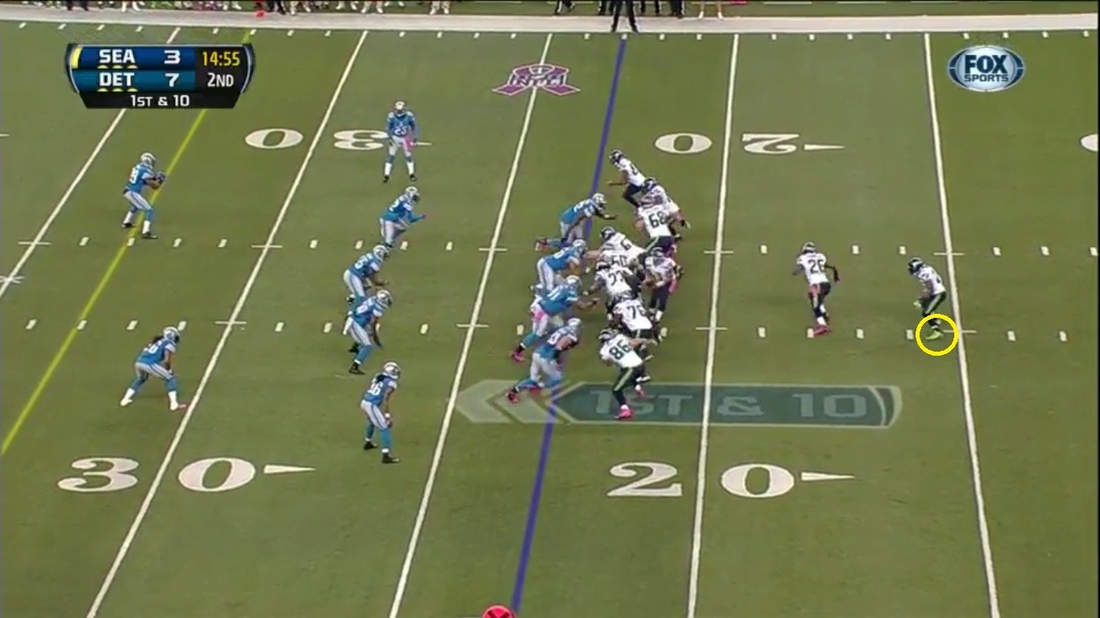 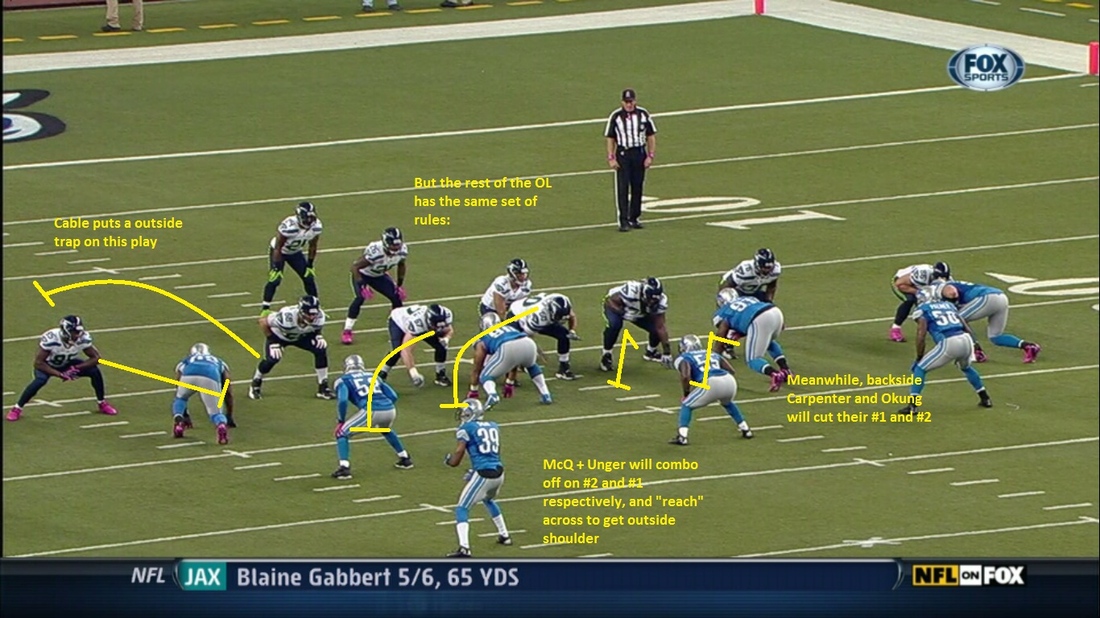 The ball is snapped. Lynch takes the step and looks at the outside DE. What does he do? 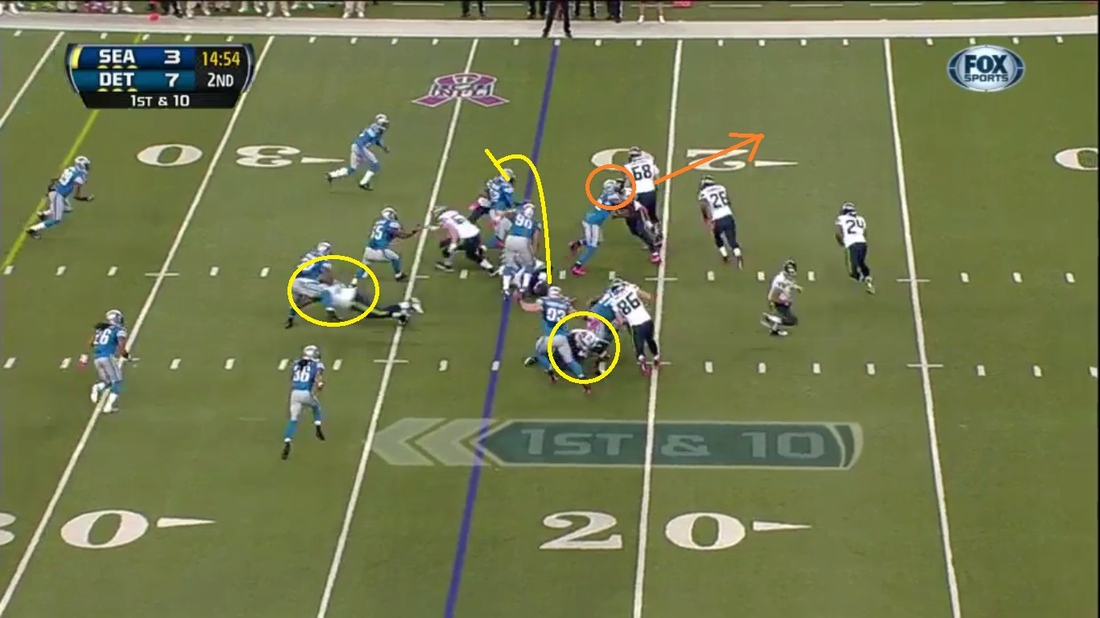 He runs up field and inside, so Lynch will bounce the play to the outside. Eventually, he finds a gap and turns upfield: 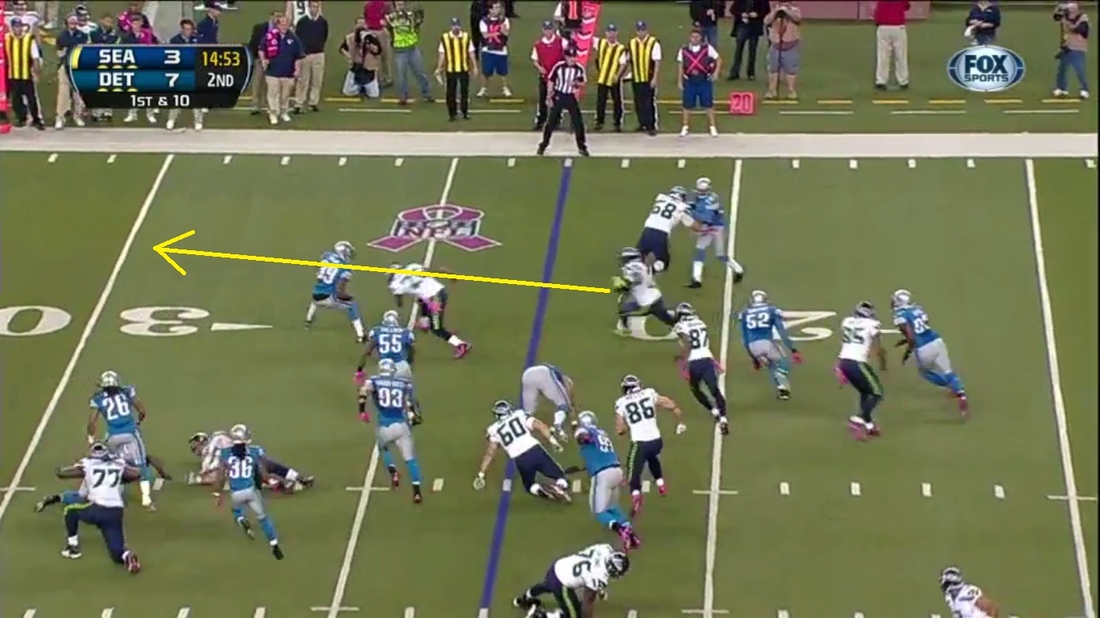 In a matter of essence, the ZBS doesn't look very difficult, and the fact of the matter is - it's quite true. What's difficult is the perfection of it. There has to be enough chemistry as a unit. Consistency is important and demanded throughout the season. I don't have to tell you how things went poorly for the run game earlier in the franchise - we've been through one and a half season's worth of hell already. But again, let me stress that the beauty of this ZBS is that if the offense as a whole unit can master it, then the Seahawks can run pretty damn well against anybody.

Tune in next time as I take a look at the motion man, pass protection, and play action instilled by the ZBS.