Share All sharing options for: The X's & O's behind Richard Sherman's huge game

At this point, effusively praising the play of Richard Sherman almost feels cliche & tired, or at least, unoriginal. Sherman has finally been getting the attention he deserves on a national stage, celebrating his title of NFC Defensive Player of the Week with an appearance on NFL AM (videos HERE and HERE), a name-drop from Ron Jaworski on PTI in which Jaws proclaimed Sherman was the "best shutdown cornerback in the NFL right now"; all this to go along with a great, in-depth feature on Pro Football Focus in which Sam Monson broke down three of Sherm's biggest plays from Sunday's game vs. the Jets.

Of course, we here at Field Gulls have known for some time of Sherman's exploits on the field (we're football hipsters like that), and have broken down his excellent play numerous times over the past year or so:

Still, at the risk of overkill on Richard Sherman analysis, I wanted to give my take on a couple of Sherman's plays - his endzone interception of Mark Sanchez and his blitz sack-strip of Sanchez later in the game - with a focus in on the X's and O's of why they both worked so well and why they make Sherman's play that much more impressive.

First of all, it's worth taking a look at Seattle's pre-snap movement and shifts. The Jets come out with a tight bunch look to the right out of '11' personnel. The Seahawks are in their nickel personnel to counter the 3WR set for the Jets and the 3rd and 6 situation. Jaye Howard puts his hand in the dirt as the nose tackle, and Jason Jones moves around, getting direction from MLB Bobby Wagner. In the secondary, Kam Chancellor communicates the coverage to both Marcus Trufant (slot) and Richard Sherman (corner). You can see Kam and Richard confirming coverage with each other and getting set.

As Sam Monson points out in his PFF piece, "bunches usually force teams that use a lot of man coverage out of that and into some form of zone because of the threat of crossing receivers setting pick plays for the defenders, so Seattle counters with a simple Cover 2 look."

So, prior to the snap, with a bunch look coming out of the huddle, Kam switches things up to a cover-2 look to make sure the crossing routes don't set picks for Sherman and Trufant (called "rub routes") and lead to easy touchdowns. The Hawks don't play a ton of zone in the secondary, but in this case, it's the prudent choice.

The ball is snapped, and the Seahawks rush three, dropping eight into coverage. Jason Jones drops into short middle coverage - something he's certainly capable of doing with his quickness and long arms. Leroy Hill joins him in patrolling the short middle, and Bobby Wagner drops into the deeper middle in zone coverage.

On the wing, Sherman mans the flats - his responsibility - allowing Kam Chancellor the deep half of the field in which Jeremy Kerley runs a sort of corner-post into. The route is meant to suck Sherman deeper and further away from the sideline and goalline, allowing a dragging Keller to sneak underneath for easy money. Sherman's not buying it though.

"At the snap I recognized they were attempting to run a condensed version of double post with a flat route," Sherman noted to Monson, referring to Hill's steep post route and Kerley's corner-post. The flat route is by Keller, which Sherman sees coming. He baits Sanchez, in fact, hoping to give enough of a cushion that Sanchez will actually throw the ball.

On the KING5 postgame show, Sherman described to Paul Silvi what went down:

"There was great coverage on the inside to begin with. Kam, and the linebackers had great drops, and that's where [Sanchez] was looking first. You know, that's the play they've run many times, but usually it's a little further out. So, I had a flat-route, kind of a check down, come up a little bit later, and every time I get on of those, I kind of try to bait it, you know, sit back and see if the quarterback will throw it, and (laughs), it never works. They always see me out there so they never loft it, but he kind of thought he could get it out in there, so he lofted it out there and I got a chance to get my hands on it."

As Monson put it in his piece at PFF, "This is some extremely sophisticated stuff from Sherman, and shows an awareness and feel for coverage that a player of his years shouldn't yet have. He wasn't just sitting in a zone and then trying to beat the receiver to the ball, he was playing with angles knowing that by sitting off but gaining depth on the route, he would be in perfect position to break on it and intercept it while also actively encouraging the throw to be made."

Important in all this though was the linebacker and safety drops that Sherman gives credit to, because if Sanchez hadn't pulled off of his first couple of reads, the throw wouldn't have happened. The overhead view gives a great angle of this, and sure enough, Bobby Wagner's coverage over the middle, though it really does leave a little to be desired, does enough to force Sanchez to look elsewhere.

Steven Hill (84) looks to be the primary, and though I'm sure you'll get a thousand Jets' fans bemoaning how incredibly open Hill is at the end of the play, it's important to note where Wagner is at the moment when Sanchez is looking for his primary.

Now, there are some QBs that will make the first-read throw illustrated above and below, regardless - put it up to a place where only the receiver can get it and hope your guy can make a play. Hill is big, but Wagner has some long arms, is extremely athletic, and is looking in right at the football, as opposed to trailing the receiver, so it would be a tough, tough throw to complete. So, probably for that reason, Sanchez doesn't pull the trigger. 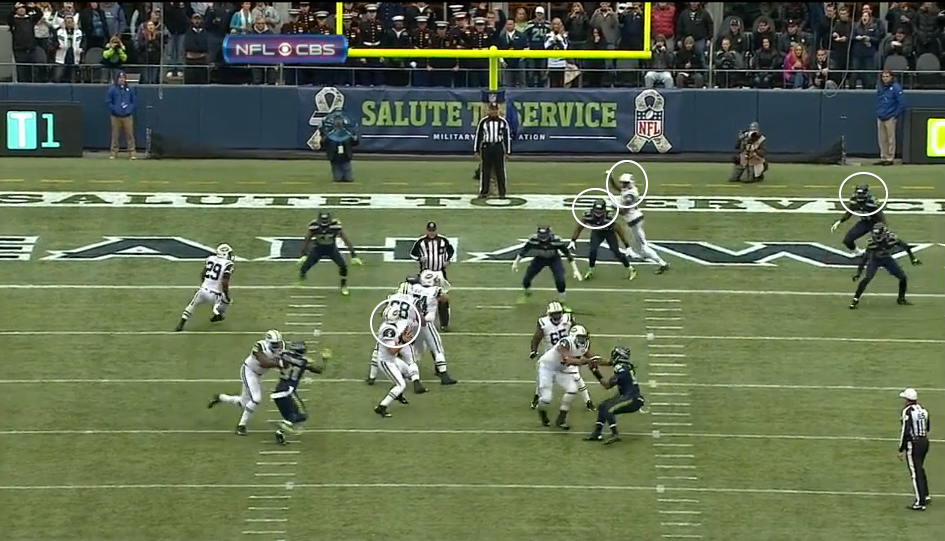 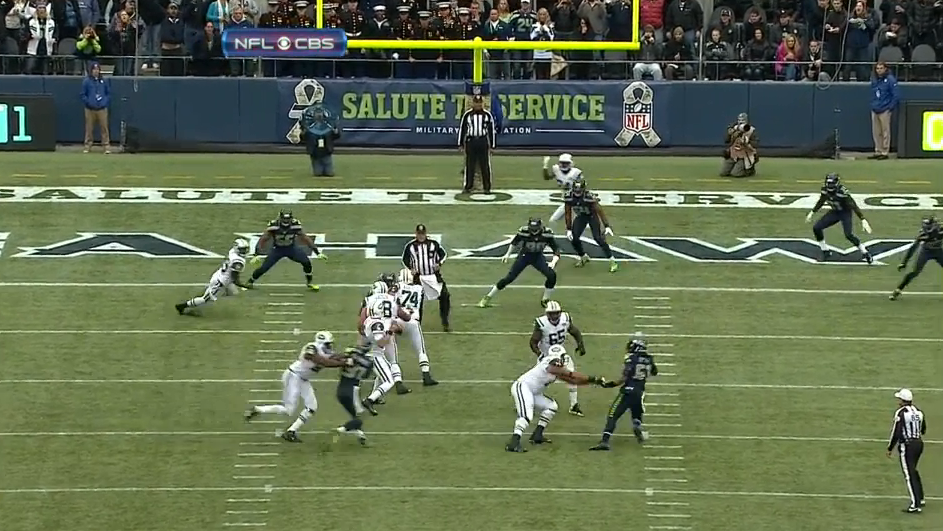 Instead, he looks to his secondary options and by that time, he's moved on from a wide-open Hill. This is why "he was so open" is a tenuous argument when one doesn't consider the route progression-read progression relationship. 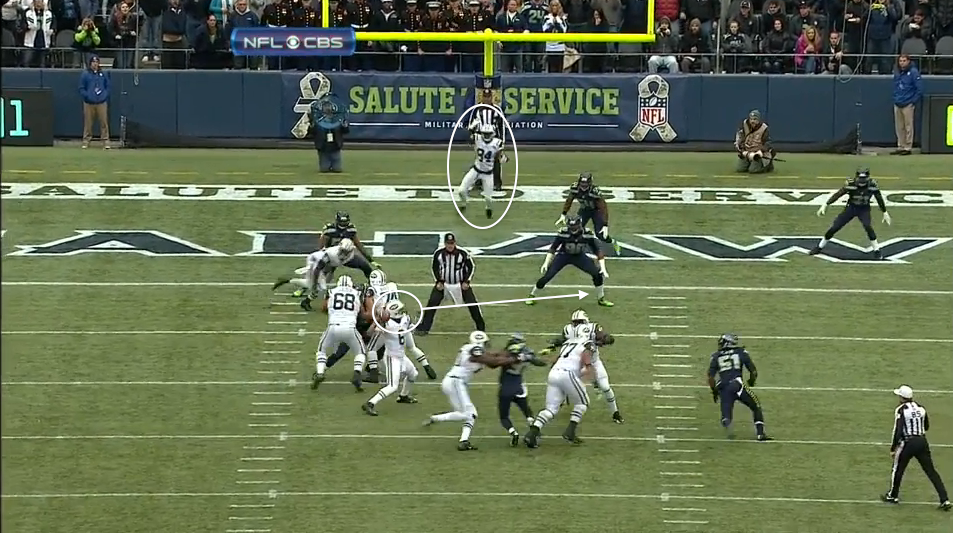 Sanchez pump fakes, ostensibly to Kerley, in a vain hope it will get Sherman going elsewhere, (Kerley is being covered by Chancellor), and then tries to force it into Keller. Sherman jumps all over it.

The other play that I thought was noteworthy was Sherman's blitz sack-strip of Mark Sanchez. The play came at a great time for Seattle -- they'd just scored on a deep seam pass from Russell Wilson to Sidney Rice, led 21-7, and were looking to avoid letting the Jets back into it with 13 minutes to go. The Jets were driving, though, and were now past the Seahawks 35-yard line with a fresh set of downs.

That's when this happened.

Again going back to the KING5 postgame show with Paul Silvi, Silvi started talking to Sherman about the sack and prefaced his question with, "When they called your number on that blitz...", but was quickly interrupted by the Seahawks' CB.

"It wasn't a called blitz."

"It wasn't a called blitz or anything. It's a coverage we have [when facing that grouping of personnel]. I'm in locked coverage on whoever is on the backside, - you know, whichever tight end is on the back side, I'm locked up with. But if he motions -- there are two tight ends - it was a two tight-end set - but, in that particular instance, they brought an extra tackle instead." 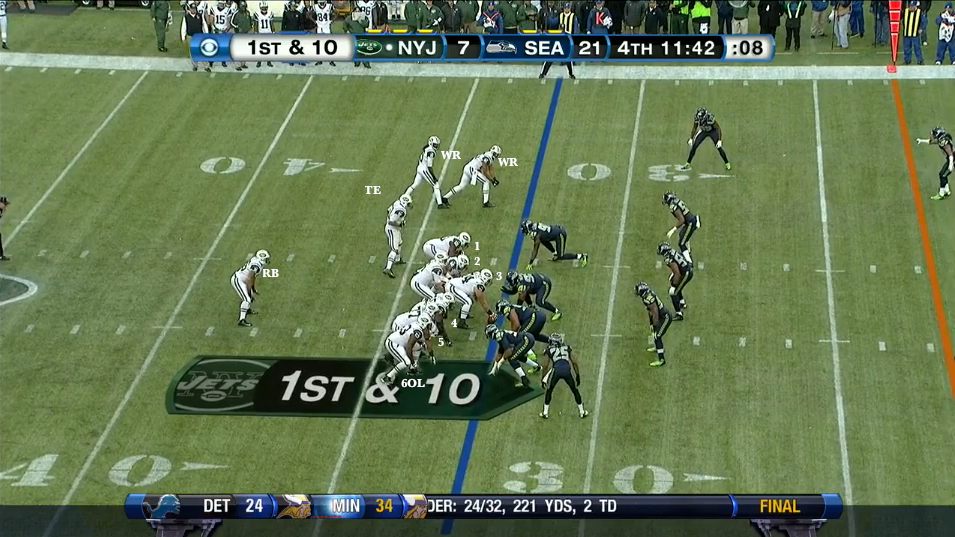 The Jets did this on the play prior as well - a 6OL look - on a short run for a first down. When you hear the referee announcing over the loud speaker that 'so-and-so number has declared as eligible,' that usually means the opposing offense is bringing in an extra tackle for a 6OL look and they must declare which tackle is an eligible receiver. Now, on goal-line looks, it behooves you to stick with that tackle-eligible in case he's running a delayed route like Tom Cable and the Raiders used to do with Khalif Barnes, but in this case, Sherman didn't have much (or any) reason to fear it, considering the Jets were still outside the 30-yard line.

Sherman: "The tight end [to my side] motioned, but the tackle there, he's not going out for a route. You know, I haven't seen this look since camp. They showed it to me one time in camp, and you know, expect me to play it when I see it. So, I saw it."

And more importantly, Sherman reacted to it. With a gusto, and not a shred of indecision.

"There's a lot of things, a lot of adjustments that you see on the line. Movements, you have to know when they're in a straight I-back set, an I-near set, an I-far set, motion the Y-tight end over the line, everyone has to know it, so it's a lot more cerebral than people think."

Big thanks to BigTrain 21 as usual, not only for the gifs this week, but for hooking me up with the video of Sherman on the King5 post-game show.

If you're looking for Seattle Seahawks Tickets to the upcoming game at the CLink (or on the road), make sure you check out Field Gulls' tickets page, brought to you by our partners at TiqIQ.