One thing that's kind of fun in breaking down Seahawks' X's and O's is that I've begun to be able to recognize one particular play/scheme and then notice Seattle run it, or variations/evolutions of it, throughout the game and/or later in the season. Sometimes it's useful, sometimes it's not. Regardless, like co-writer Thomas Beekers, I like to keep an eye on trends and innovations, or simply changes in the Seahawks' schemes. One thing this has done is that it has helped me to appreciate how much the gameplan and offensive design changes from week to week and how much the Hawks have begun to open up their playbook in terms of multiplicity and variety.

Example - the Seahawks used 3TE sets to their advantage against Dallas - Evan Moore saw 22 snaps that game, a vast majority in '13' personnel - and I wrote about that possible emerging trend for the offense back in mid-September. After I had written that piece, Pete Carroll noted on the air that 'oh that was just something that we wanted to try this week - we thought we saw a weakness and wanted to exploit it' or something along those lines. Sure enough, Seattle has pretty much ignored that '13' set since, and Moore has seen his snap count taper off drastically, only seeing the field twice against Detroit on Sunday. That said, I bet we'll see it re-emerge sometime randomly, in like Week 15 or something, when teams aren't game-planning against it.

Another example of an interesting scheme change has been that the past two to three weeks, Seattle has begun incorporating lead draws and read options into their offense more and more frequently, it seems. We saw a few against Carolina, and I believe there were a couple sprinkled in there against San Francisco. Then, on Sunday, Seattle found it to be very effective against Detroit's attacking d-line, and it came in handy on several integral snaps late in the game.

Another integral snap and interesting scheme outlier came on the first play of the 2nd quarter though, when Seattle used a crack toss to spring Marshawn Lynch for a 77-yard touchdown run.

When I started looking at the play more closely though, this play seemed familiar, for some reason. Then it struck me. It felt awfully similar to a play I broke down in the preseason which I had then dubbed a 'power sweep' - a play which Robert Turbin took a toss downfield for a gain of ten against the Titans - and it was a play that was a little different than most of Seattle's zone concepts, which had caught my attention. The most apparent difference to Seattle's normal zone running schemes was that in the crack-toss power sweep, a pulling tackle is a key piece of the puzzle.

As I wrote back in September, the Seahawks run a lot of 'zone-stretch" plays where linemen move laterally on the snap, and the goal for each man is to either a) seal their defender away from the play side, or b) if they're unable to do reach the defender to do so, they must push that defender forcefully and powerfully toward the sideline playside to create a crease for the running back to run through. Linemen with no man in front of them either double team the defender that the man to their right or left is taking, or move into the second level to engage a linebacker or defensive back. This is a basic tenet of the zone-running offensive game plan and you see it many times per game for Seattle.

That said, the Seahawks still run elements of the Power-O run game from time to time, as all teams do, and the most obvious indicator of a 'power' run is a pulling guard or tackle.

Typically, in Power-O, the backside guard will pull (release from his stance and run) playside over the downblocking (toward the center) tackle and guard on the playside. This pulling guard acts as a leadblocker in tandem with a fullback or H-back.

In this particular Seahawks run play though - a run in which Marshawn Lynch took 77-yards to the house - the Seahawks do what they did back in preseason week one with Robert Turbin, but execute it to absolute perfection this time.

In essence, it's a fun variation of this "Power-O" basic idea. Back when I wrote the piece in September, Eric Stoner, Scott Enyeart, and Keith Myers all pointed out that this run has some similarities to the Buck Sweep, a Wing-T family offensive package that has some elements in use here, with the difference being -- in those formations you see the FB run misdirection, not lead blocking. So, in this case, "Power Sweep" is accurate enough of a description, without knowing what Tom Cable calls it.

There are five key players to watch closely in this play:

1: At the snap, RT Breno Giacomini pulls right to seal the cornerback out of the play.
2. Anthony McCoy seals the playside defensive end with a crackback.
3. Ben Obomanu seals the playside outside linebacker with a crackback.
4. Paul McQuistan pulls downfield and cut blocks the middle linebacker.
5. Of course, Michael Robinson takes out the last line of Detroit's defense, safety Ricardo Silva.

God, it's fun to watch Marshawn Lynch run in a straight line. 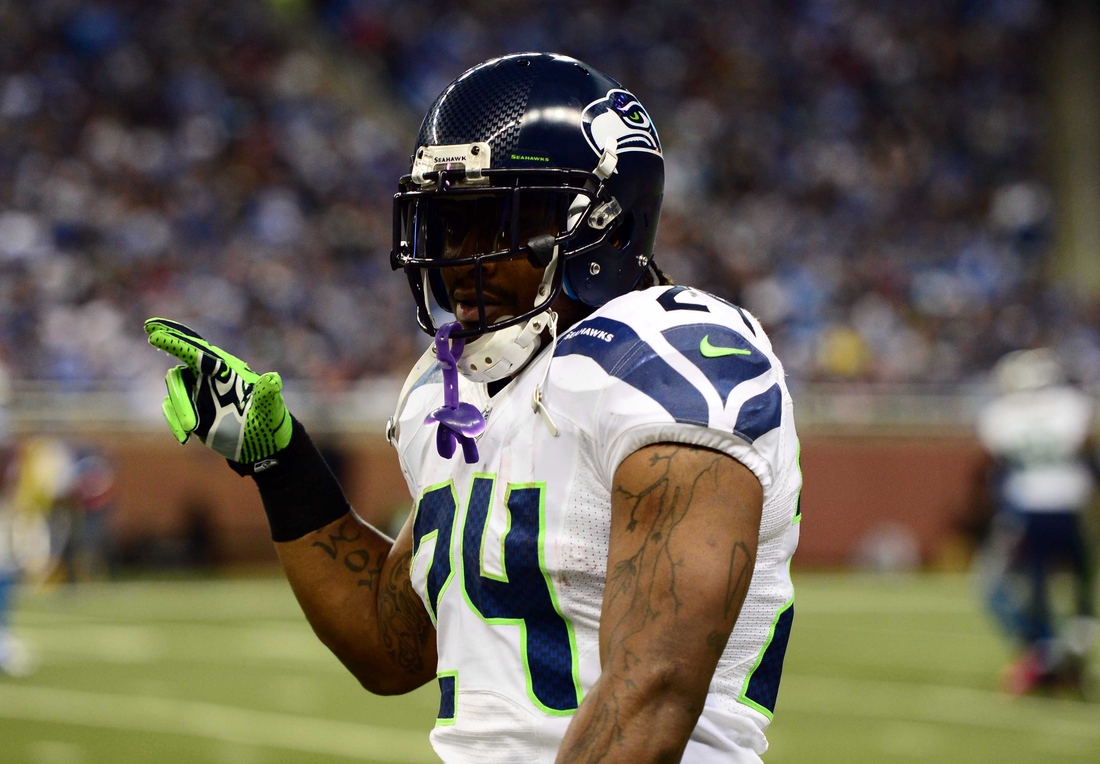 On any 77-yard touchdown run, either the defense totally f*cks up, or the offense just happens to click on all cylinders for a coordinated, concerted and harmonious moment of glory.

This was one of those plays.

The reason this was a 77-yard jailbreak run and not a 10-12 yard gain was that on the left side, Max Unger, James Carpenter and Russell Okung took away any semblance of effective backside pursuit.

There were four key blocks that I broke down above, and those were point of attack things that had to come together for any 'success' on this play.

But, there were another three key blocks on the backside, and the result we saw was that the closest defender to Lynch in the 2nd level, after his foot-in-the-ground cut downhill, was the backside defensive end, Kyle Vanden Bosch.

The confluence of these events = 77-yards untouched.

Huge, huge thanks to BigTrain21 for the badass gifage above. His work adds so much to our analysis, so I can't thank him enough.

This post is sponsored by Jack in the Box.