Short yardage defense & Mike Morgan, 'The Next Guy Up'

Share All sharing options for: Short yardage defense & Mike Morgan, 'The Next Guy Up'

In retrospect, it's easy to forget about the Seahawks' 4th down stop of the Jets on New York's first possession. Seattle ended up winning the game handily, holding the Jets' offense scoreless and limiting them to 185 net yards in the entire game.

However, as with anything in sports, the timing of the big defensive stop changed the momentum quickly, which, at the time, was swinging in New York's direction. The 4th and 1 play from the Seattle 40 yard line was the 11th in the Jets' drive, and would have been the 4th first down of the possession for the visiting team. We know that it's fairly important for this Seahawks team to start quickly -- they're not ideally built, at this time, to mount significant comebacks -- so a first-possession, clock eating and energy sapping score for the Jets on their first possession wouldn't have exactly helped keep the Seahawks' crowd amped up and into the game.

Interestingly enough, when New York brought in their 6OL Jumbo personnel grouping to smash-mouth pickup that much-needed extra yard, Mike Morgan, making his first NFL start, was the man that brought the double-digit-play drive to a screeching halt.

You can see the Seahawks' counter -- Kam Chancellor creeps in off the strong-side edge as contain (there is no WR to his side). Mike Morgan, the Sam linebacker, is up on the line covering up TE Dustin Keller, with Jason Jones in at DE over the top of Jets' swing tackle and former #2 overall pick Jason Smith.

Inside, you've got Red Bryant, Brandon Mebane, and Alan Branch, about a gross ton (ok, not really that much) of angry linemen ready to crash the party. On the outside, Chris Clemons is lined up outside the left tackle. Bobby Wagner and Leroy Hill are the linebackers in this grouping, with Earl Thomas and Brandon Browner the last defenses (Earl in the secondary, Browner playing press to the defensive right). 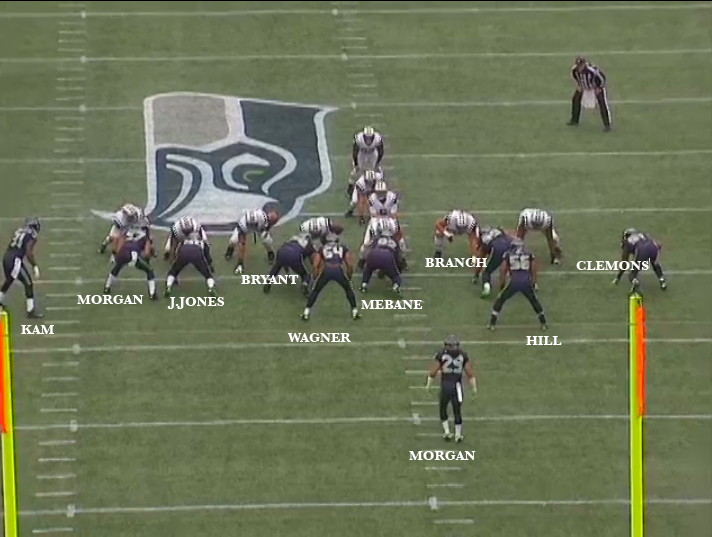 At the snap, Bryant and Jones are going to crash down to their right quickly and forcefully, hoping to break up and forward surge and to create a logjam of gigantic bodies in the middle. Branch and Mebane will look to create a vice there, with Bobby Wagner and Leroy Hill buttressing the action.

Chris Clemons and Kam Chancellor are hoping to keep contain in this situation and avoid any cutbacks or bounce-outs by Shonn Green. 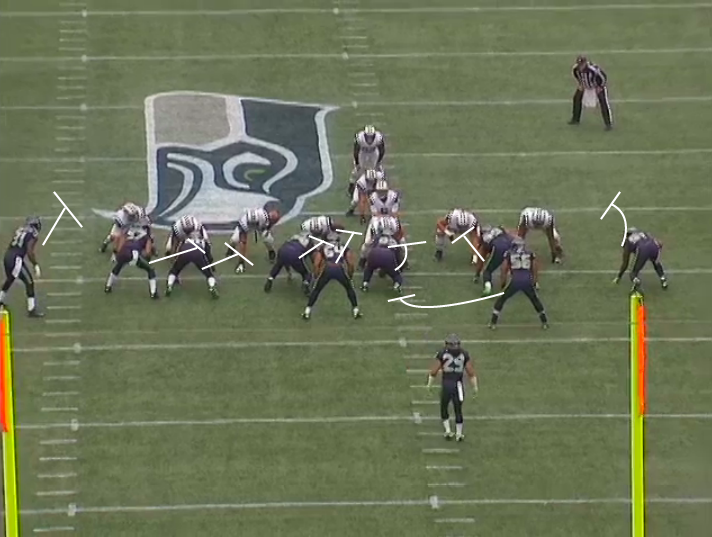 Ball is snapped. New York downblocks to their left, but pulls the left guard across the formation. He doesn't really get far in all the commotion that's caused by Bryant and Mebane in the middle. 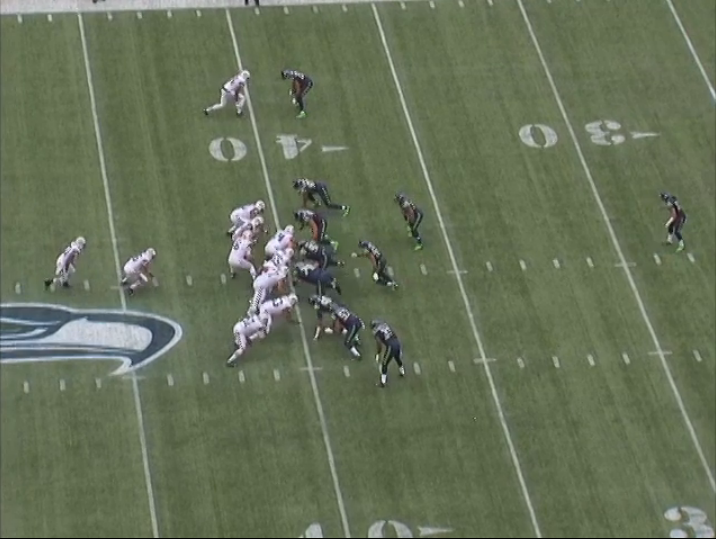 You can see Bryant, Mebane, and Branch all get an excellent push to the defensive right, but that's actually what New York is hoping for. The run is designed to go away from the blockers, following the fullback to the left (offensive right). 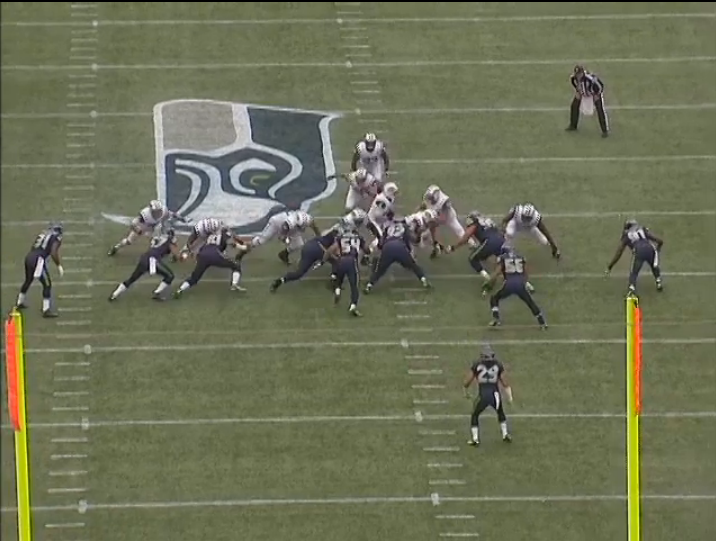 The key player here is going to be Mike Morgan, but he's helped out a lot by Jason Jones, as the two of them work together to push 6th OL Jason Smith into the backfield and actually toppl him over. Jones' ability to quickly penetrate the line allows Mike Morgan to first penetrate, then 'get skinny' and sneak through the line to blow up the run. 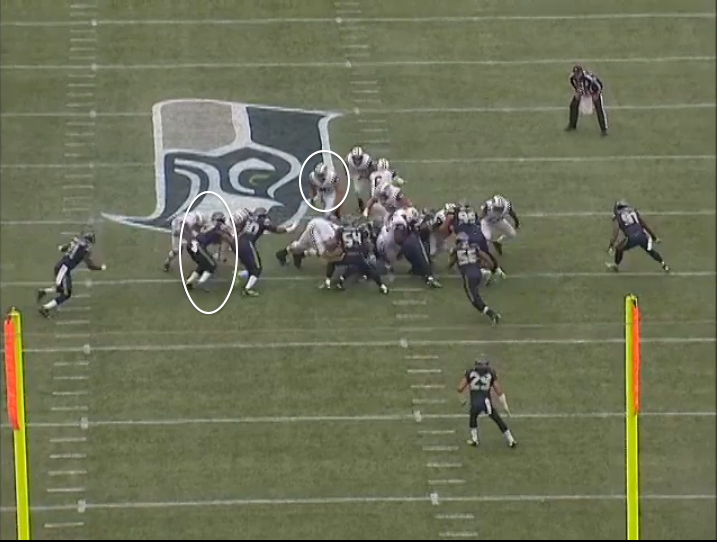 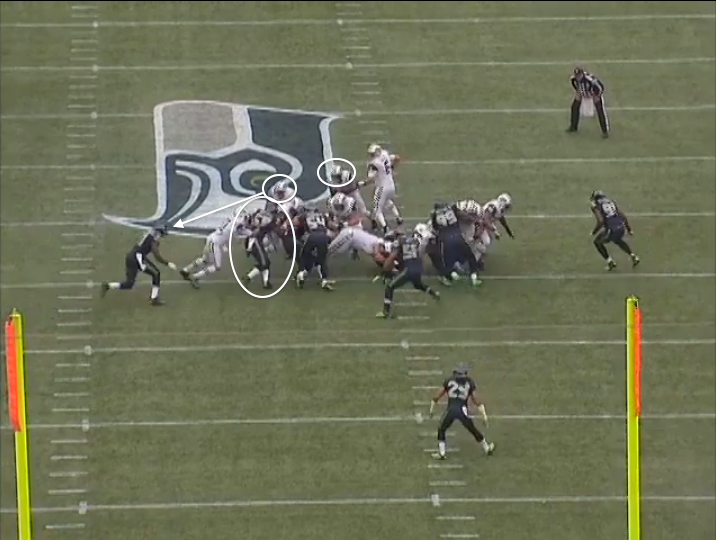 Meanwhile, Kam Chancellor is going to take on the fullback head-on. You can see Morgan sneaking through the jumble. 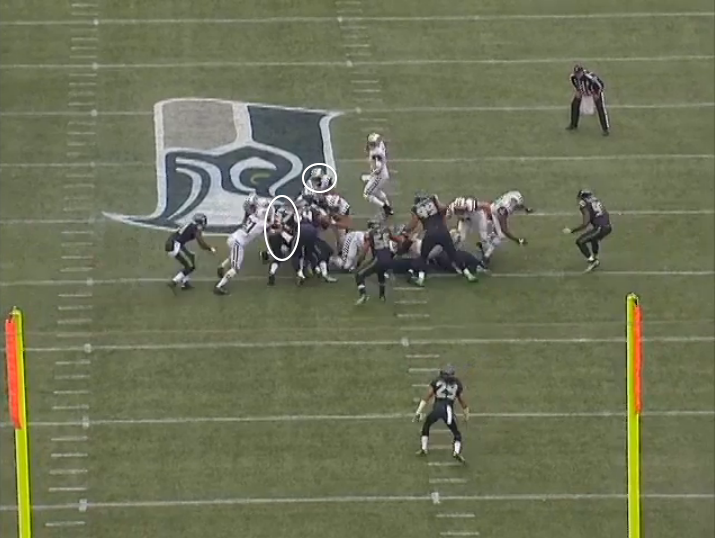 Morgan takes down Green, with some over-the-top help from Leroy Hill, who, for his part, has sniffed out the play very well from the weak side. 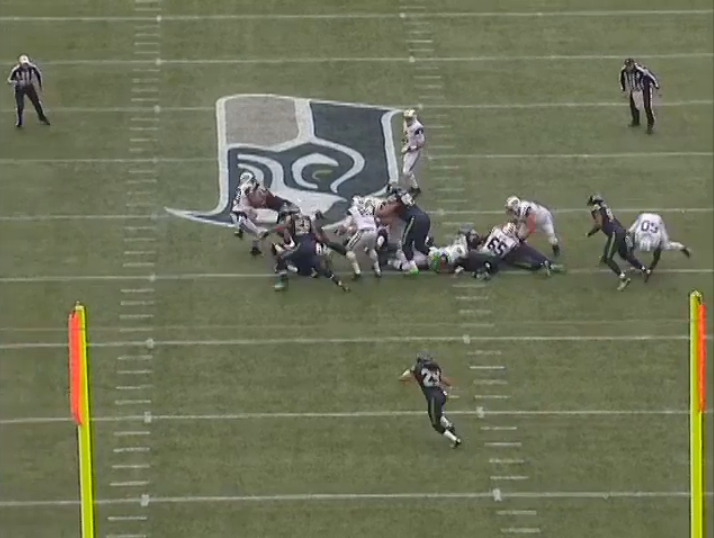 Now watch it in slow motion.

The impressive part I see is that Jason Jones and Mike Morgan work together to topple Jason Smith over at the snap, which allows Mike Morgan to sneak in behind Jones to blow the play up behind the LOS.

Dustin Keller tries to "reach" Morgan but he's too quick off the snap.

It's pretty impressive to watch the complete stonewalling that Seattle's defensive line demonstrates here. New York got absolutely no push at the snap, and three or four Seahawks were in the backfield in a flash.

Mike Morgan played a much more technically sound game last week after finding himself out of place at times and missing assignments at others versus Minnesota, when he came in for an injured K.J. Wright. It's nice, though, to know that Seattle's depth at a thin LB group can hold up over nearly two whole games and provide quality play; solid, not spectacular. Morgan's not as talented or instinctual as Wright, but he improved from week-to-week, and gained some valuable game snaps in the process (and Seattle still got two wins).

Much thanks again to BigTrain for providing such great gifs on a weekly basis!