Because you can't basically run the ball.

Back for more, are you? Please, if you haven't, get caught up on the previous posts of this topic here: Part 1, Part 2 and Part 3.

When we last left off, I was in the process of fleshing out what makes the ZBS so effective and glorified. The running game has been talked about so much in the past three articles that I really neglected on talking about the other side of the game - primarily involving the QB and WR of course.

While the ZBS may be one that is run dominant, it certainly doesn't mean that there are liabilities in the passing game. One of the reasons that guys like John Elway and Matt Schaub were/are able to put up huge numbers in addition to having a dominant running game was/is because of play action. By setting up the run, the defense is opened up to a lot of holes its coverage. Play action in the ZBS is also augmented by an athletic QB, who, while they may not be able to run, still hold enough credibility in finishing a rollout that he holds the backside LB and S away. This is why you see Wilson (and to an extent, Tavaris Jackson) always running out the rest of the handoff.

In terms of pass blocking, the ZBS is still quite different from traditional schemes, but less so than the other run schemes. Alex Gibbs himself doesn't seem to be as interested as discussing this matter when asked, and rightfully so - it's pretty much too basic and simplified to be broken down.

Footwork is one of the keys to becoming a good offensive lineman, and this is one of the few traits that Gibbs and Tom Cable emphasized and emphasize again and again in their schemes. Most of the time, when the offense is passing, the O-Line forms a pocket around the QB by dropping back, almost kicking their foot up to back-pedal. Their immediate instinct is to get as wide a base as possible and square up to the defender before they engage with their hands. This is why the tackles "turn" their shoulders and form what is typically called a pocket. 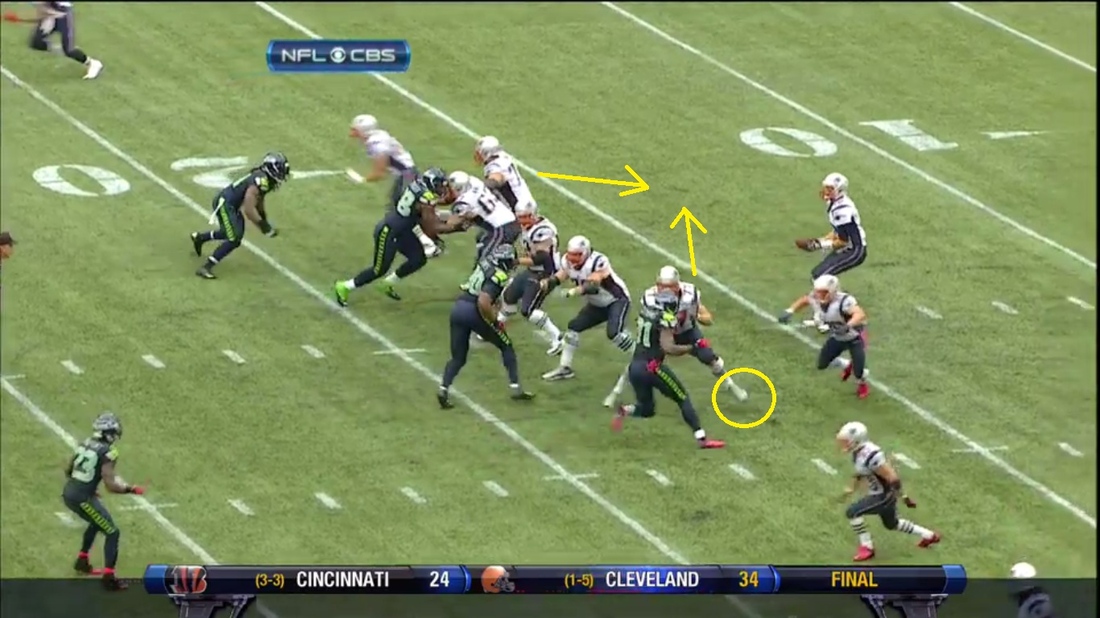 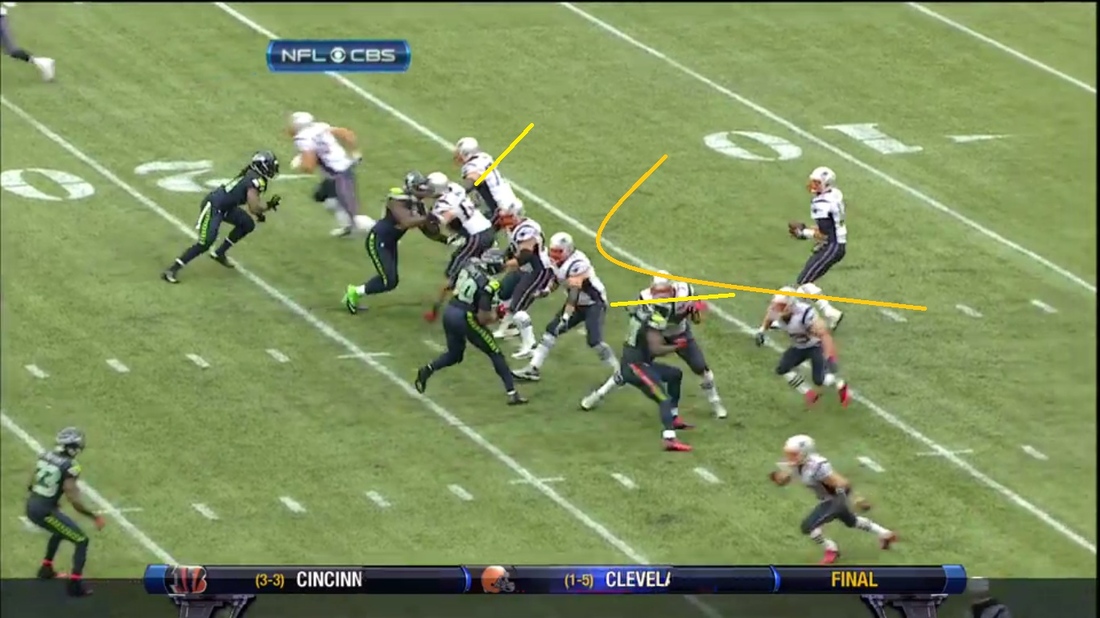 With the ZBS, it's a totally different story.

The first step that every O-Line takes in pass protection is actually flat and not angled: 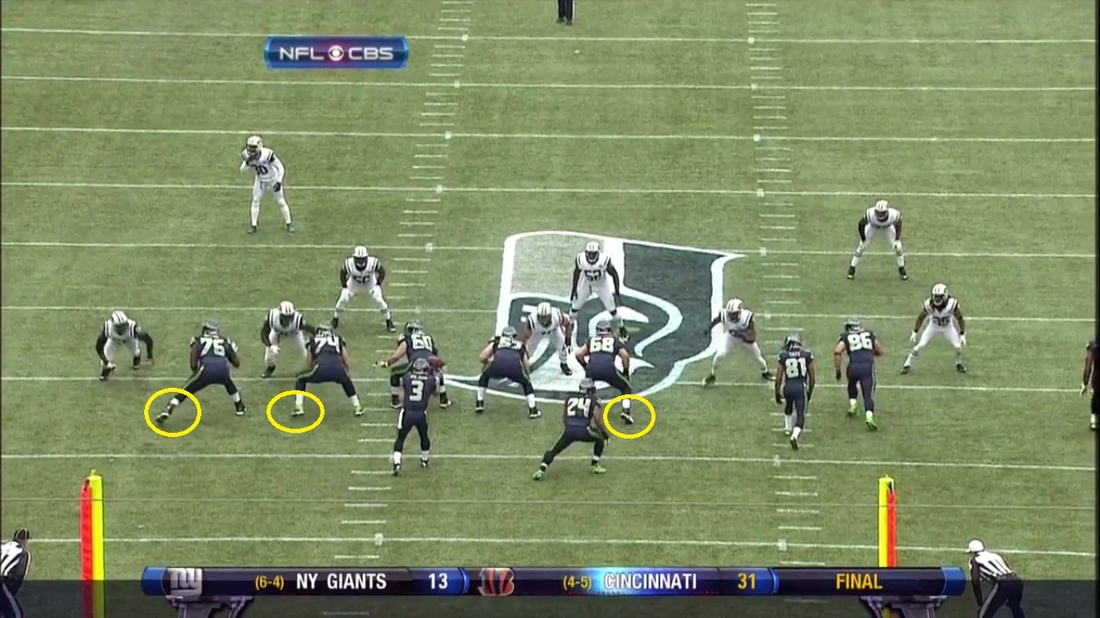 What this actually does is that the pocket actually becomes wider, rather than narrower, as compared to those of the Patriots' protection: 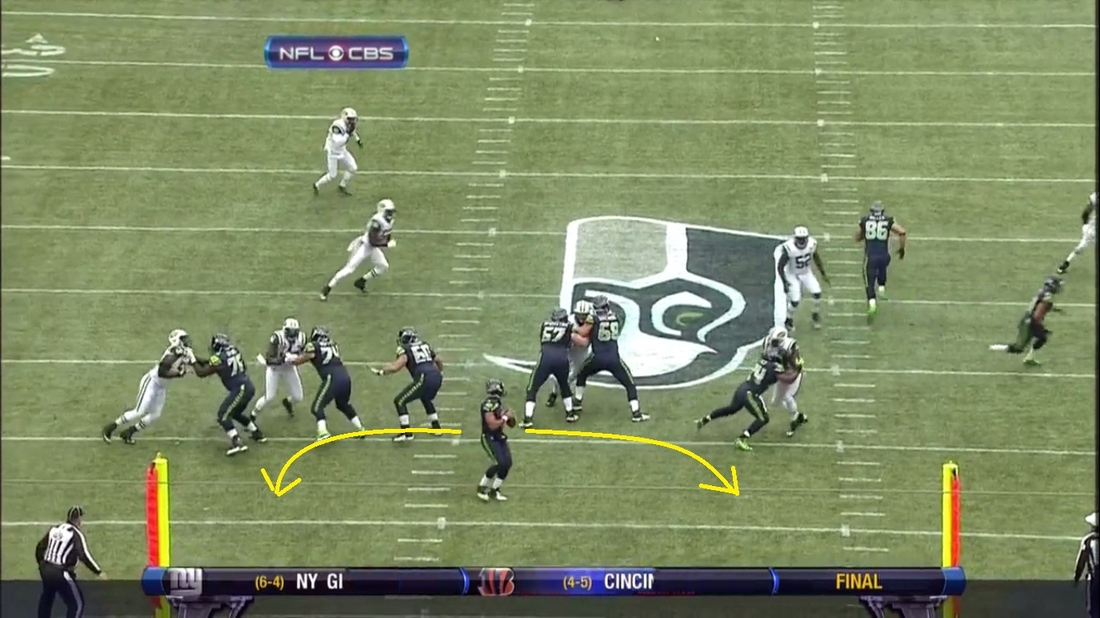 Essentially, this is what I categorize as a form of slide protection, where instead of reaching the guy lined up the defender, the OL will blocking the guy to the left of him or to the right of him depending on the call: 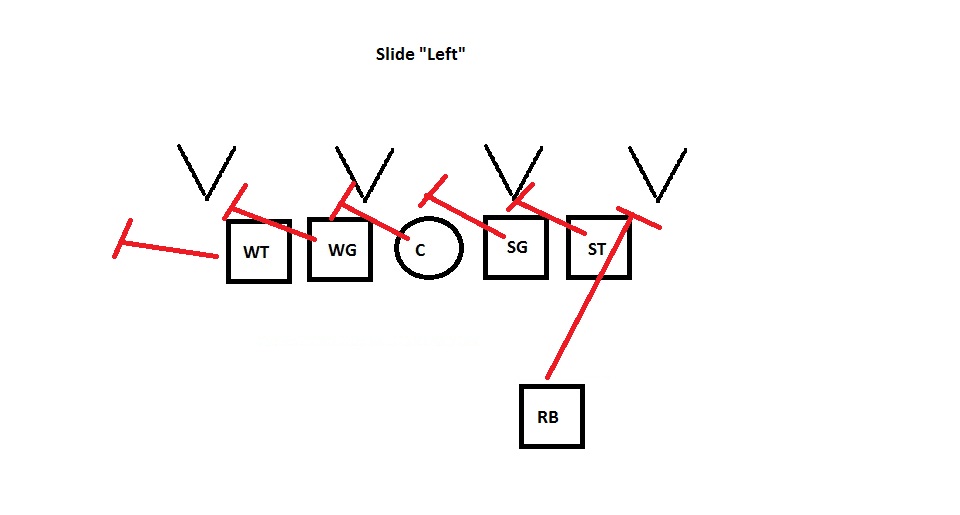 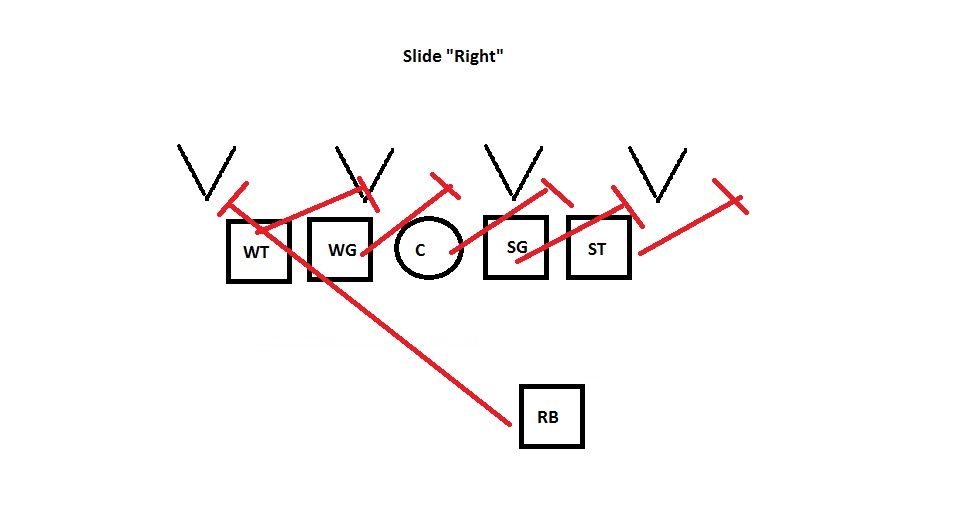 You can see here that the RB/FB and either OT has the job in setting the edge of either sides of the protection. The RB/FB must also react quickly to the block and meet the pass rusher up front. Notice also that the "slide" also dictates the OL's first step, something that looks eerily familiar... 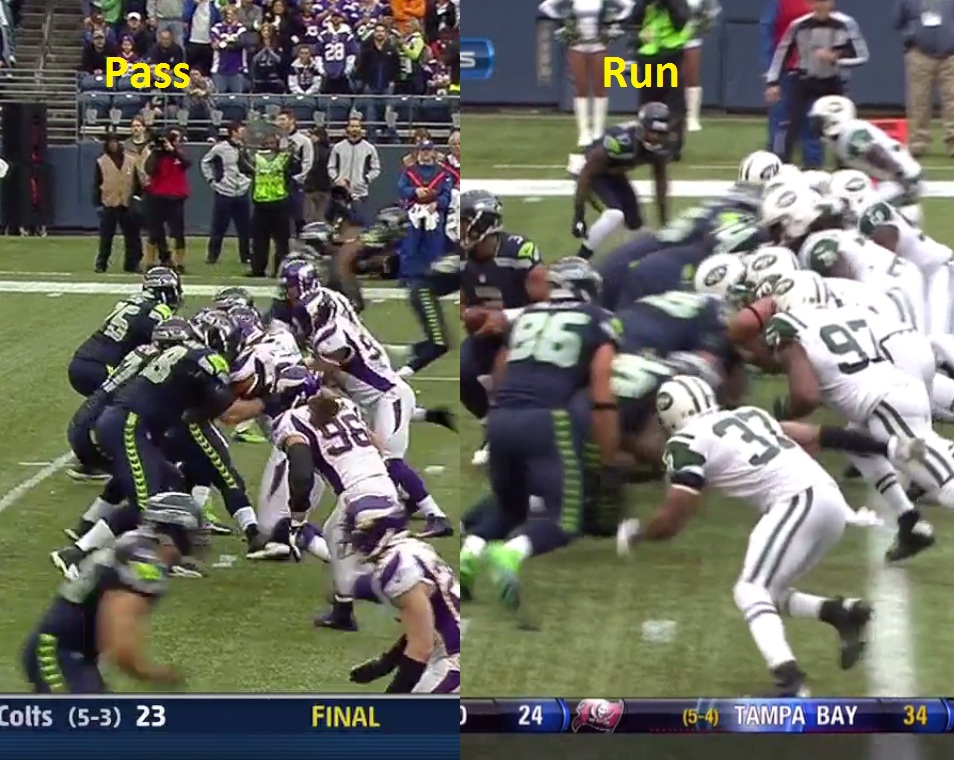 To the untrained naked eye, it seems that the OL's movement is quite similar, almost identical. This is in fact due to the scheme's ability to try to mix up protection schemes to punish the D for guessing. In a regular scheme, for example, if the OL always drops back his outside foot on every pass block, then the defensive coaches are smart enough to scheme a running blitz look in coverage simply by knowing how one foot works over the other. By having almost all of the run/pass block's first step be the same, it forces the D to play balanced, or even worse - cheat and get burned badly. The inclusion of play-action also helps sell the play enough for the LB that, along with the similar veins in first steps by the OL, might force them to over-commit and let loose in the middle (see: Part 2).

You may have noticed that in the protection play above that Lynch, the RB, sets the right edge of the protection rather than the RT Giacomini. It's a part of the slide protection in general, but Darrell Bevell also does a good job in incorporating play action within the blocking: 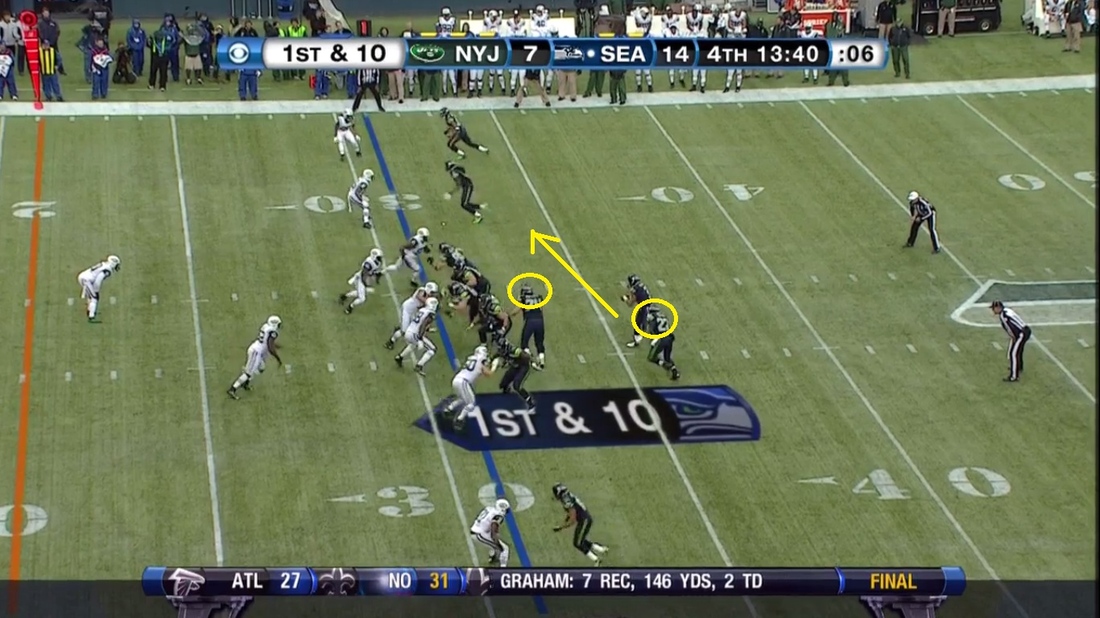 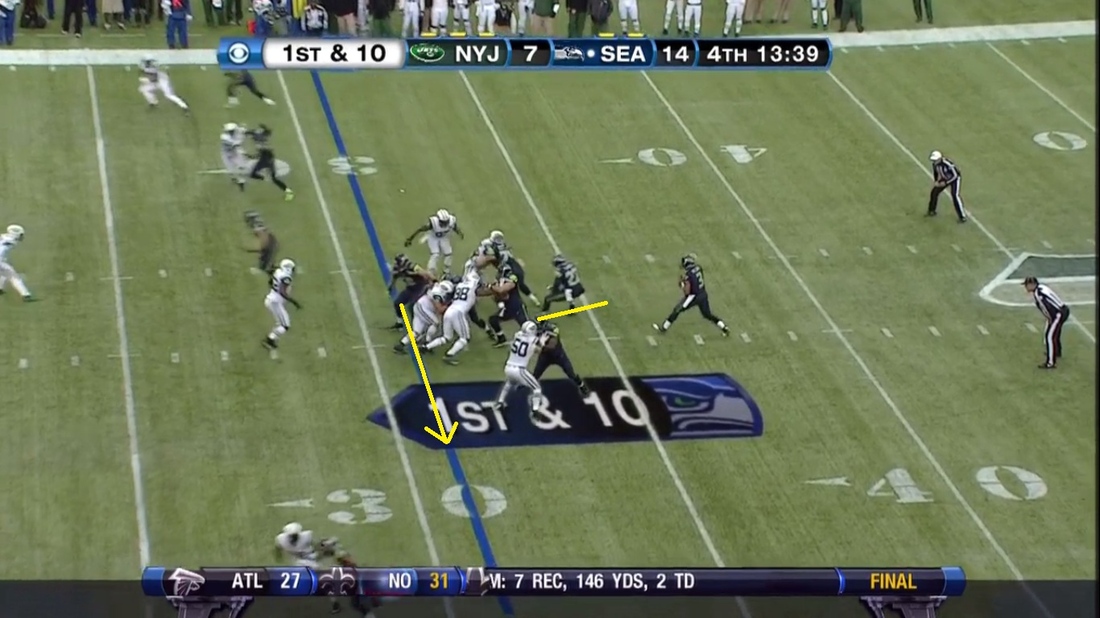 (Notice here that Moffit pulled from the left side, which, along with the route Turbin is running towards the right, sells the play action/possible run that holds off the MLB. Since the protection is slide right, Unger would be blocking Moffitt's man, and vice versa with Turbin setting the edge.)

The Motion Man: What can the H-Back do for you?

When I first delved into the style of Cable's ZBS, I mentioned the difference in his usage of the motion man, and how the second TE on the field (or the first, depending on the formation) serves as more in the vein of another blocker rather than an actual receiver in the field (barring play action of course).

With more research and analysis of the game film however, I realized that the motion man is not only important to the run game, but absolutely vital as a safety measure as well. In essence, the motion man is typically called on whenever the defense overloads or cheats itself against the box. 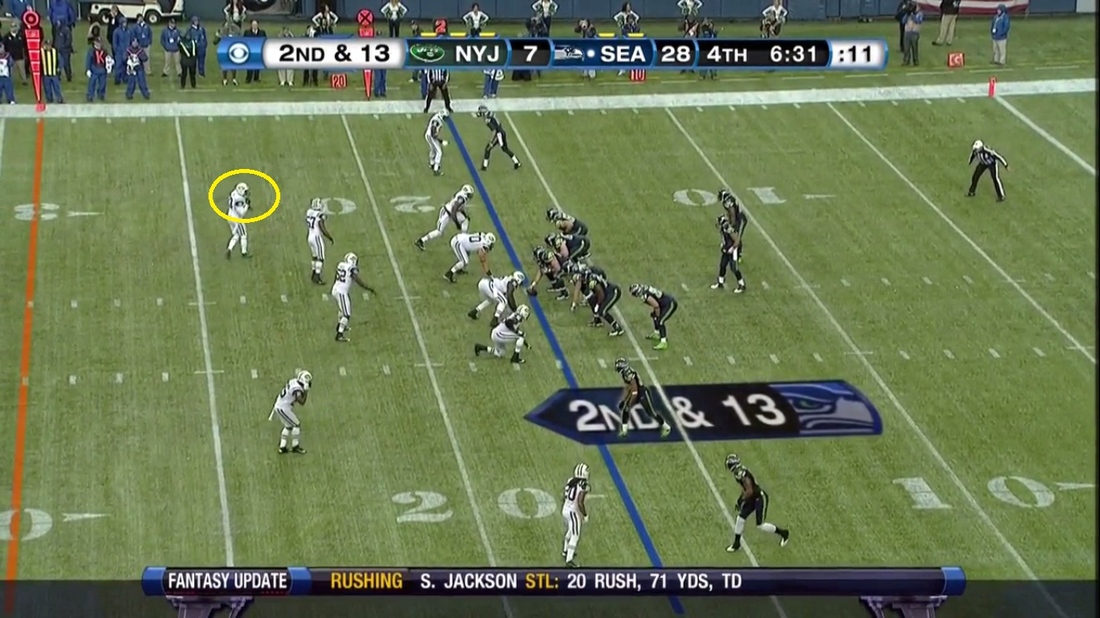 You can see here that the Jets safety, Laron Landry, is cheating inside the box by moving up from his supposed position. By counting alone, the Jets have 4 defenders to block on the playside, while the Seahawks only have 3. It doesn't help that Landry moved in on the same side as where the Seahawks will be running towards.

Wilson counters and motions Miller towards the other side of the formation: 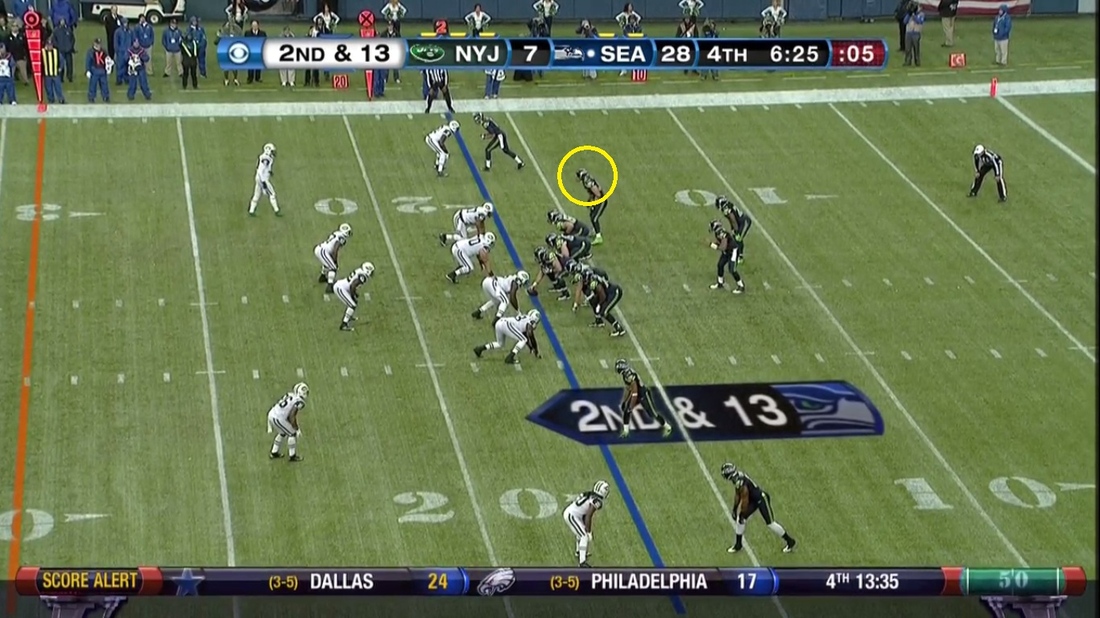 And what this does is quickly equalize the numbers (4 defenders on the strength vs. 4 blockers) and neutralize the threat the Jets brings. Miller ends up looking like he's running a route, forcing Landry to cover him rather than playing the run at 100%. Conveniently, this opens up the running lane which Lynch uses to get the first down. 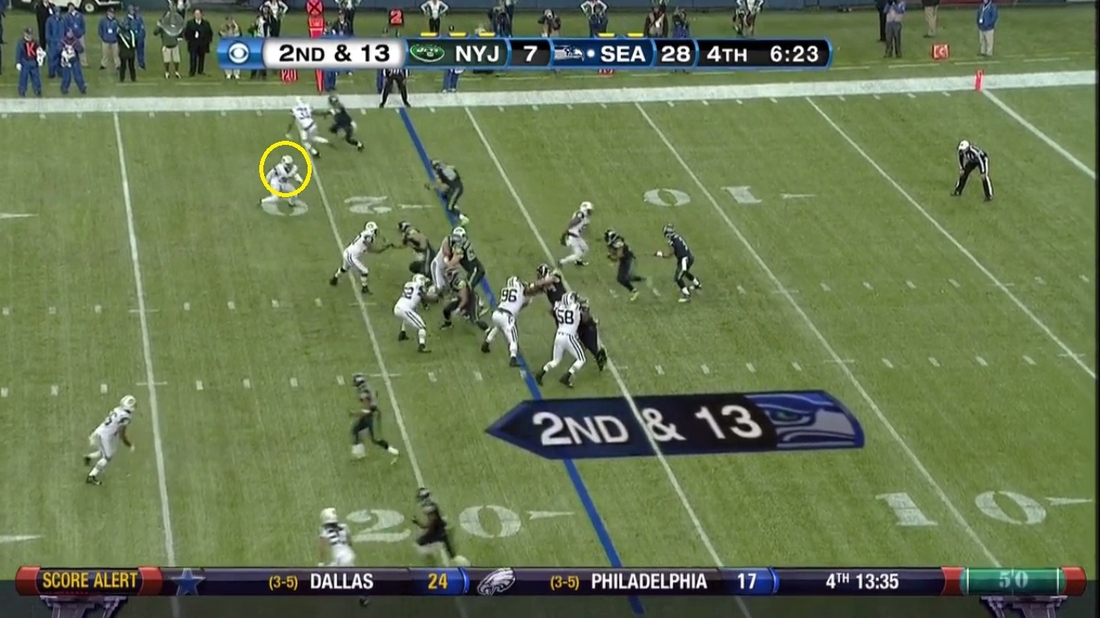 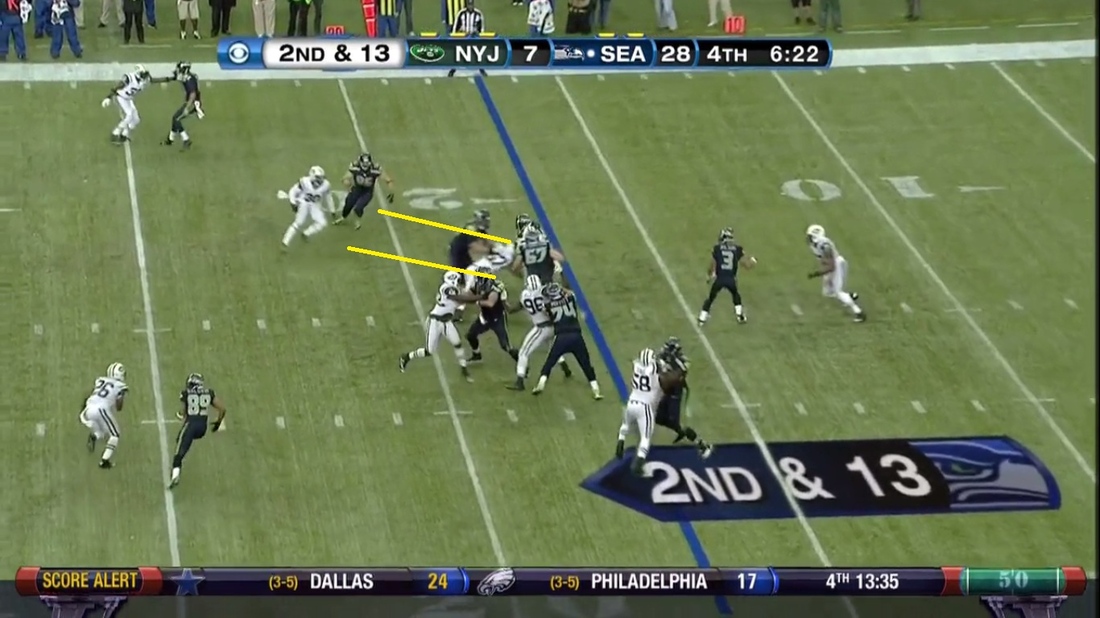 This is the main backbone of Tom Cable's ZBS and one of the main reasons why the team can run against the 8 men in the box. It is also why you see the Seahawks invest so much into the TE group and why there is a need to look into players that are both a catching and blocking threat.

During his presentation/review of the ZBS, Gibbs also mentioned how he preferred the usage of a TE as a lead blocker over the traditional FB:

"I do not like the FB in the backfield; he has a better angle if closer to the LOS...we sometimes let "[TE]" lead on inside zone. Either with pure zone rules (where he blasts a hole if there's none there, or goes on the near safety if there is a hole. Or with old fashion isolation blocking (where we just leave the TE with the LB). I like to do either of these, because it removes the WILL (Weakside LB) from folding back into the play."

What does this all mean? Well first of all, it means that the TE is issued the role of the FB at times, which is why you always keep hearing Danny and friends talking about the H-Back, not the TE. 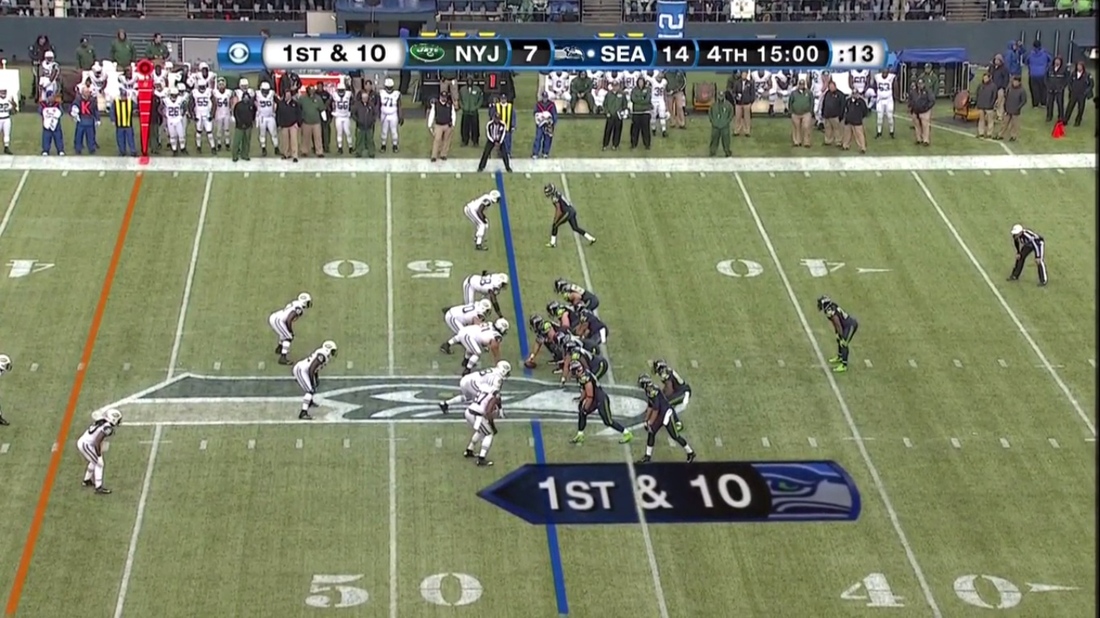 In the play above, the H-Back is Anthony McCoy. McCoy would be called in to motioning across the field and lead the run for the RB. Note how the OLB is lined up to the strength. 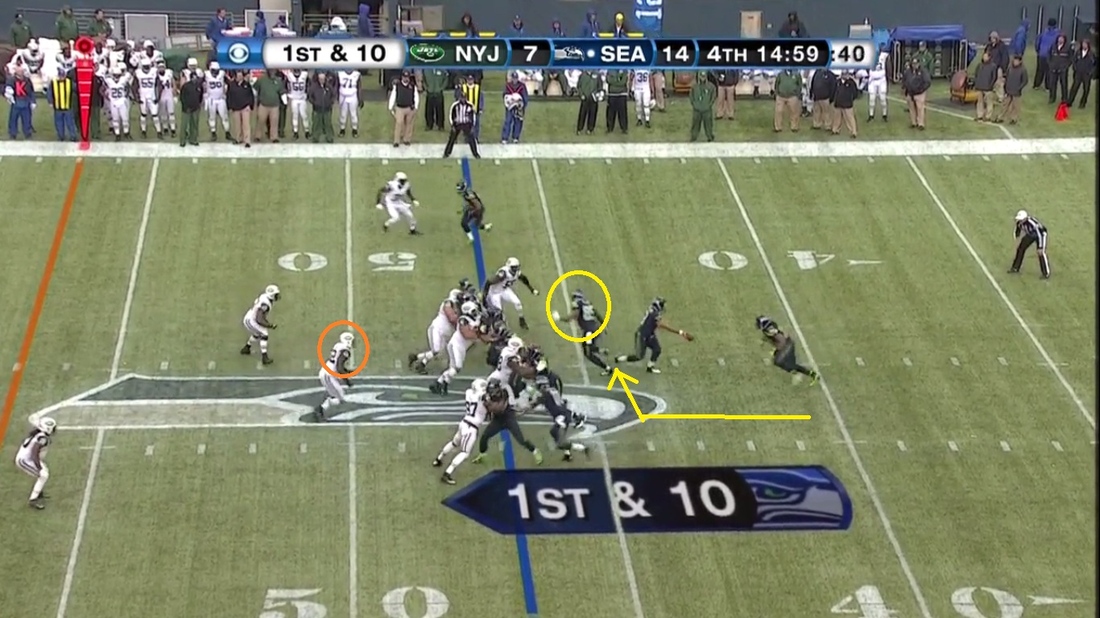 McCoy has a great angle in either sealing the DE coming up and allowing Lynch to run inside, or if he over-pursues, crashing down on him and letting Lynch run outside. Either way, it's a can't miss block by McCoy (and one that he excels in as we saw in Part 2). This is what Gibbs means by "blasting the hole" and creating a running lane for Lynch.

Meanwhile, we see that the (now) backside OLB runs inside. Why? Well, because the blocking is dictating that the hole will be to the left, and that it seems Lynch will be running inside with the handoff anyways. The formation also shows a good size gap between the blocks of Max Unger at Center and John Moffitt at Left Guard, which forces the OLB to come in for contain. But with just a simple cutback: 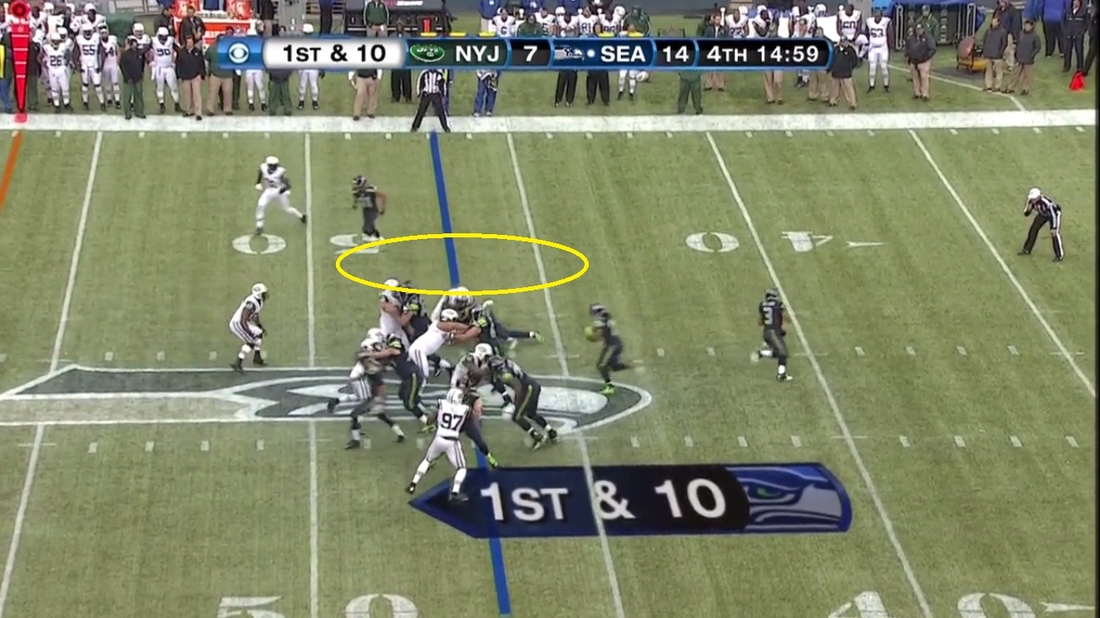 ...and the OLB can't come back to help. This leaves Lynch one-on-one with the MLB, which is a matchup the offense will take every time.

Creating Mismatches: Being Smart and Physical

Another big factor in the ZBS in general is that they take advantage of the defense by manipulating their own tools on offense. So much of the game is a chess match between the two teams that it seems impossible to simply beat a team physically to win, and having tall, lean players on your trenches doesn't seem to help either.

In this case, Cable uses as much as he could in looking for a weak point in the defense, and then trying to find different ways to exploit it. This can be a measure of height, athletic ability, size, strength and/or speed that can be achieved again through motion. 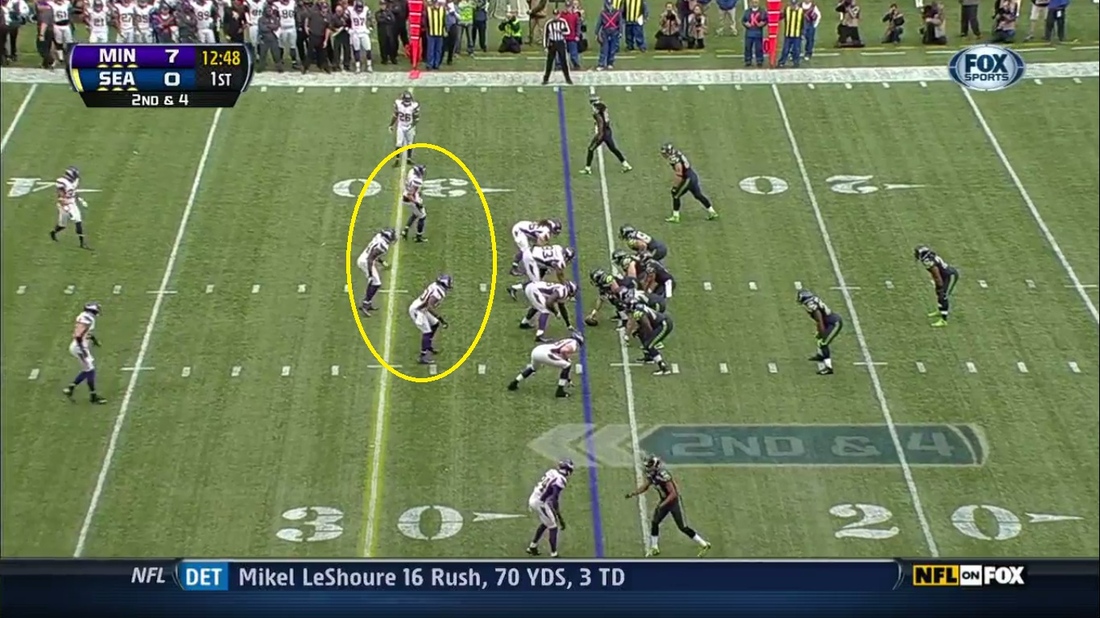 The Vikings are lining well to the strength here and are playing the down/distance and formation perfectly. Cue Miller motion: 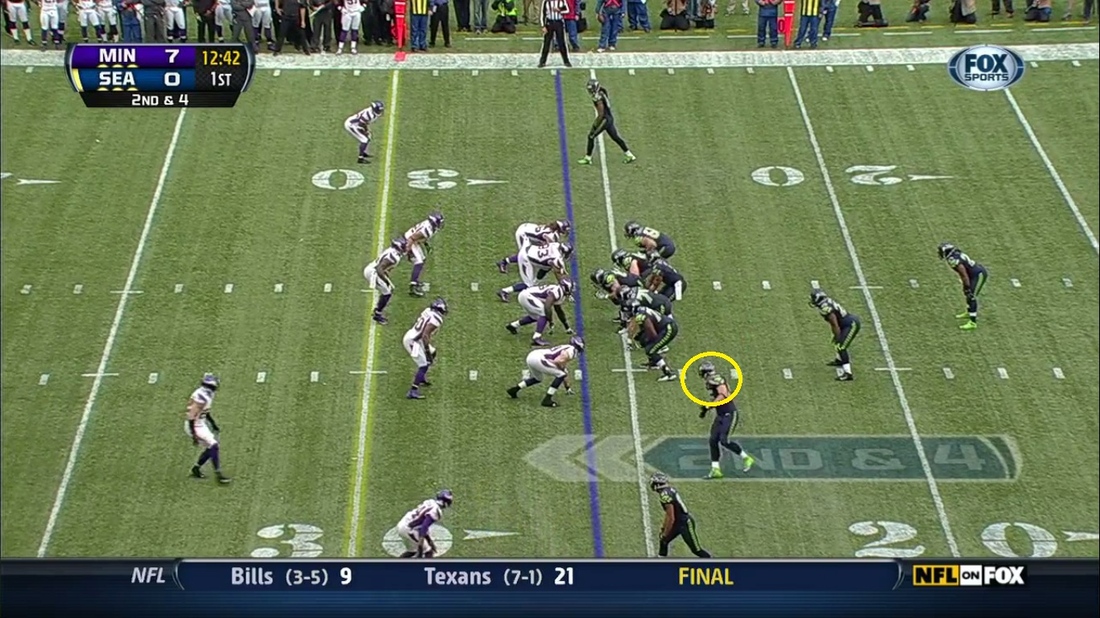 Wilson snaps the ball right as Miller gets set, and already I see a lot of things wrong with the "perfect" formation for the Vikings defense:

Easy first down by Lynch.

And this mismatch isn't simply limited to the TE: the mismatch can be used through speed too, as shown by the motioning of Sidney Rice: 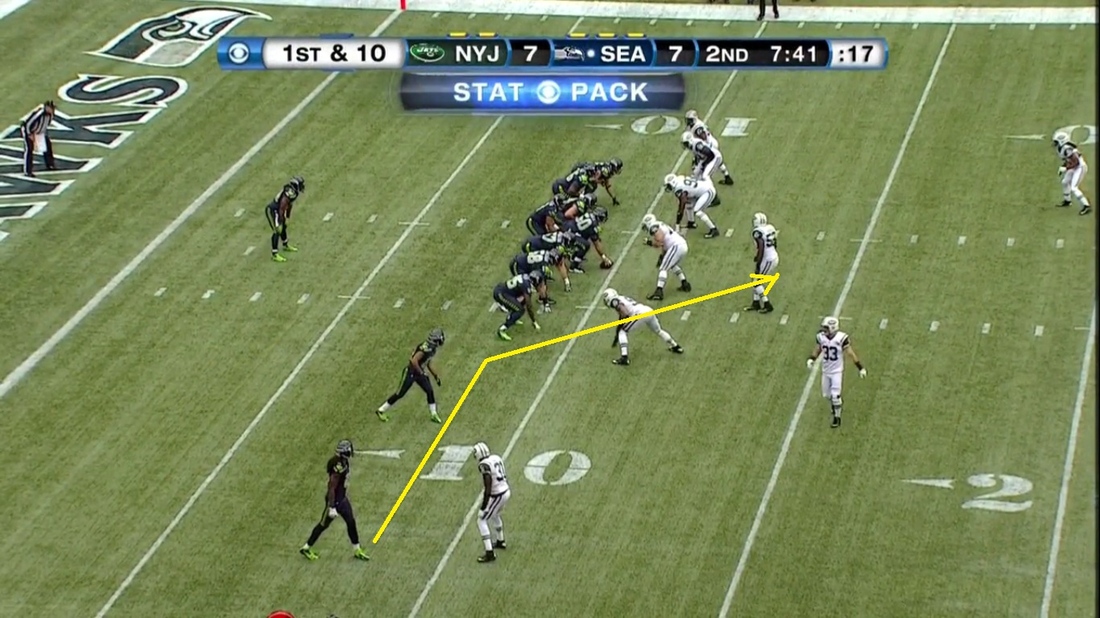 Here, Rice comes in and doesn't crack block (which, while different, would be an absolute stupidity due to his health), but he still crashes inside. What exactly does this create an effect on? 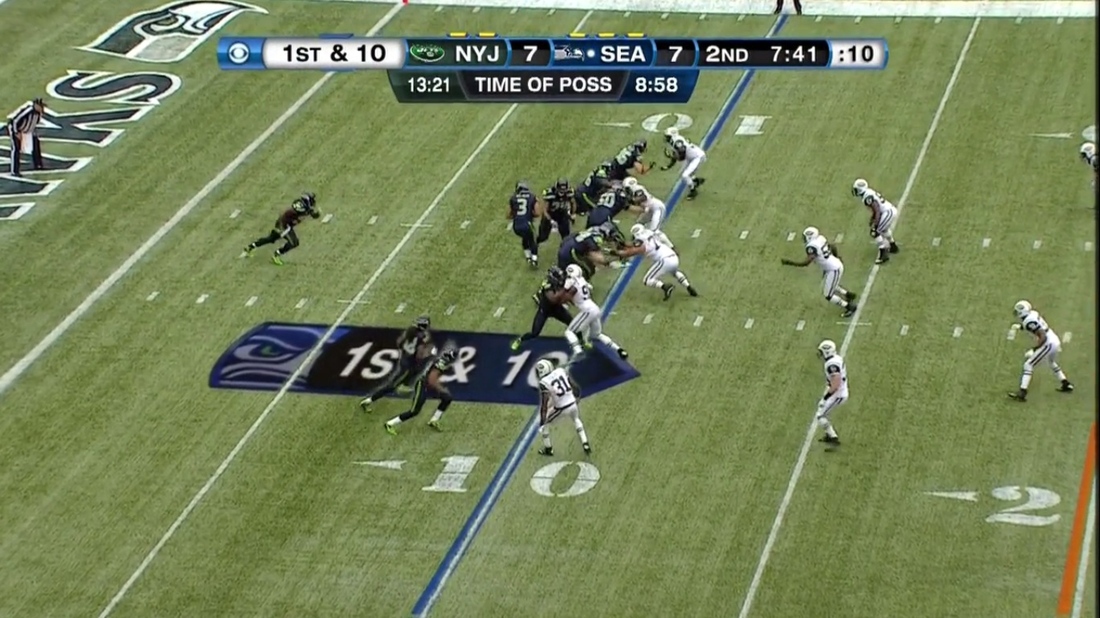 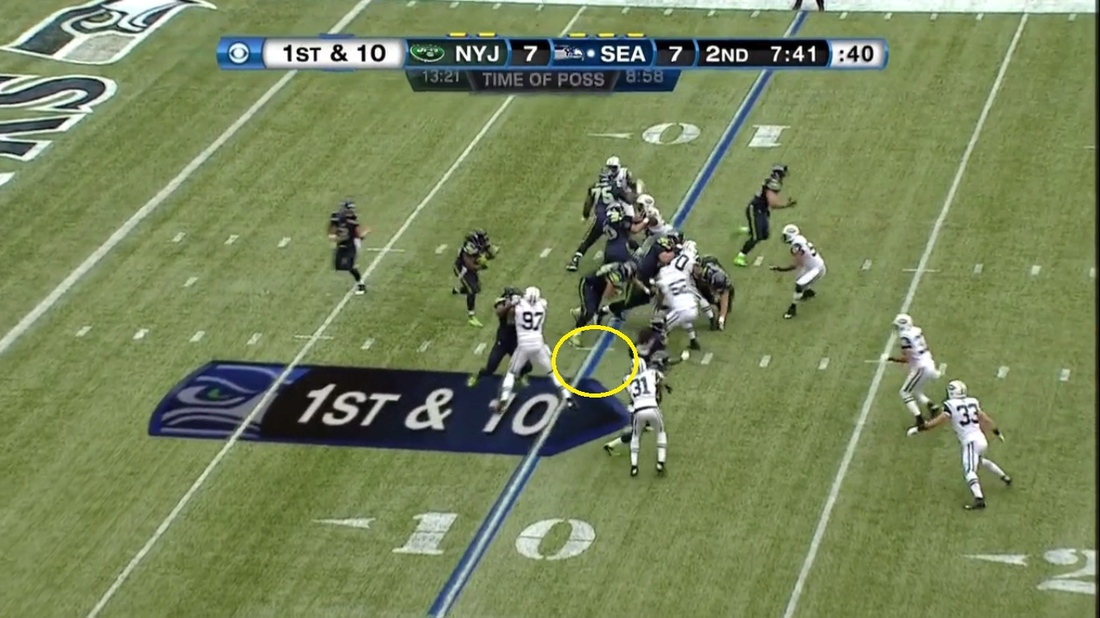 The motioning to the point of being right at the snap lets Tate get the inside block on the DB (who transitions his role from covering Rice to covering him). Rice's speed also lets him get to the second level immediately, where he cuts off the pursuing safety from the backside: 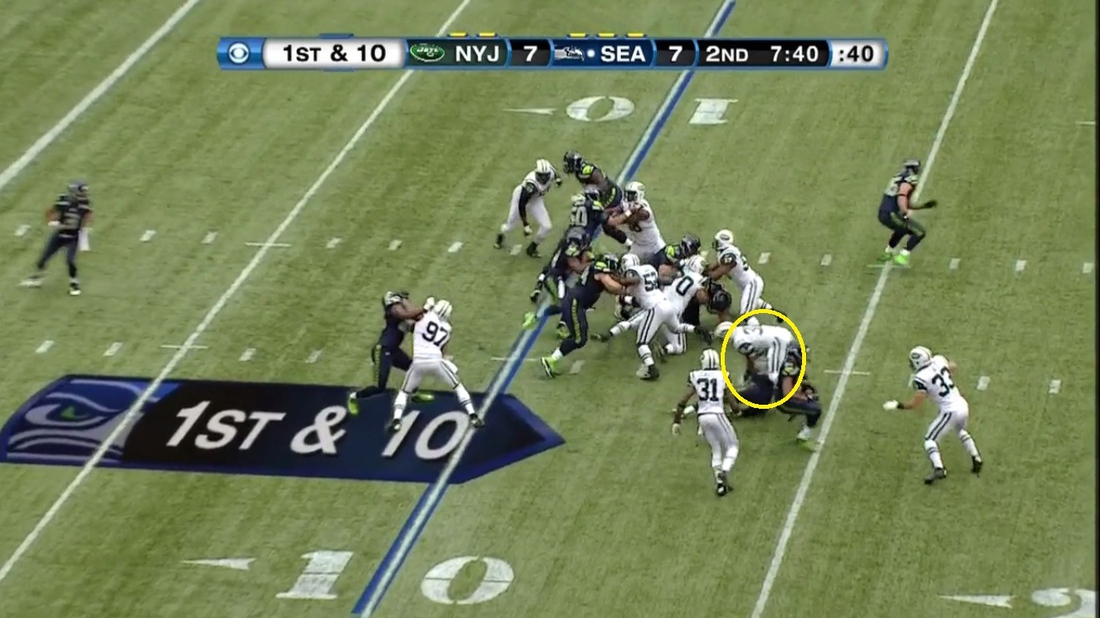 Had Lynch decided to cutback or read the hole differently, he could've gotten a good chunk of yards. He still gets a modest 5 yard gain here, and you can see up top that had he busted through the hole cleanly, he would've had a lot of open yardage and a Miller lead blocker to boot.