The Seahawks' player snap counts are out for Sunday's loss at the Miami Dolphins so let's take a look at a few notables. 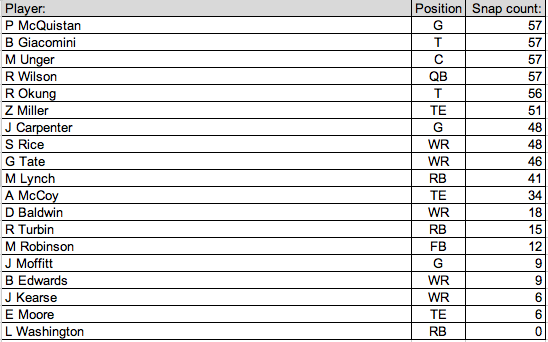 Paul McQuistan, Breno Giacomini, and Max Unger played every snap on the offensive line, and Russell Okung only missed one snap. I didn't hear about it during the game so I will have to investigate as to why he left for that one snap -- it might have been a weird formational look or perhaps he just got dinged up and had to go out for a play.

James Carpenter played 48 snaps and left briefly with a knee injury. He came back in and immediately gave up inside penetration on a wide zone play that resulted in a Marshawn Lynch loss. Carpenter went back out, but returned again shortly thereafter, for some reason. Regardless, Carp didn't look very mobile or healthy in this one as he nursed a knee tweak, but they stuck with him for all but 9 plays, in which versatile backup John Moffitt came in in relief.

Zach Miller and Anthony McCoy were again a big part of the gameplan, with Miller on the field for 51 snaps, all but six of the total offensive plays in the game, and McCoy in for 34. Evan Moore saw his snap count increase this week to 6 plays despite an early false start penalty. Seahawks' tight ends played a fairly big role in this game -- targeted seven times as a group (of Wilson's 27 total passes). Anthony McCoy had 2 catches for 23 yards, including a 3-yard touchdown pass, in which McCoy dragged along the back line of the endzone after starting out on the right wing, but after scrambling and buying time, Wilson found him in the opposite corner. McCoy's other catch was a big 20-yard first down catch on a 3rd and 4 on the Seahawks' final possession, a catch that put the Hawks into Miami territory with 2:17 remaining and a chance to win the game (that didn't end up happening, obviously).

Zach Miller had three catches for 16 yards, and Evan Moore caught his only target, a six-yard gain that resulted in a first down on 3rd and 4.

Sidney Rice and Golden Tate got the bulk of the receiver snaps, with Rice in for 48 plays and Tate 46. Tate had 4 catches for 56 yards, including a nice diving catch for 32 yards on a go-route. Sidney caught all 3 of his targets for 49 yards. Doug Baldwin saw 18 snaps and was targeted 4 times, but could only come down with 1 catch for 14 yards. Of all the Seahawks' major 'starter' type players on offense, I think Baldwin has the biggest chance to emerge as an impact player over the final five games . He hasn't really been completely healthy this year, but the escapability, agility and solid hands haven't really shown up like they did in his rookie campaign. I think that will change.

Braylon Edwards saw 9 snaps, and Jermaine Kearse got on the field for 6. Kearse caught his only target and it was a first down in a 3rd down situation early in the 3rd quarter. Edwards didn't get targeted, and just off memory, a good amount of his snaps came on run plays.

Marshawn Lynch saw 41 snaps, got 19 carries and was targeted in the pass game 3 times (caught 2). He turned those 21 touches into 47 yards. A game to forget. Robert Turbin was on the field for 15 snaps, carrying the ball twice and catching it thrice. His receiving production in this one was definitely encouraging, as he turned those three catches into 47 yards, including a long catch-and-run of 20.

Mike Robinson was only on the field for 12 snaps, which seems a little low for him, but he did score his first touchdown of the season on a four-yard play-action pass. 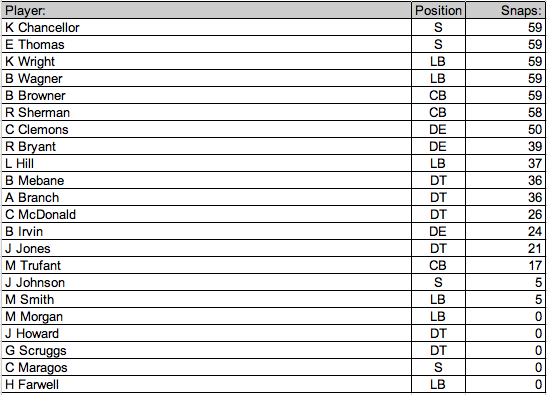 Kam Chancellor, Earl Thomas, K.J. Wright, Bobby Wagner, and Brandon Browner played every defensive snap for the Seahawks' defense. Richard Sherman only went out for one play, which I would guess was in a goal line or short yardage situation (which is typical).

Chris Clemons is a mainstay for this defense, usually only missing about two to six snaps per game, but actually ceded 9 in this one, with Bruce Irvin the obvious benefactor. Irvin saw 24 snaps on Sunday, or about 40% of defensive plays. Fellow pass-rusher Jason Jones saw 21 snaps, up from his 18 against New York. Jones had one pass defensed.

In the middle, Red Bryant got 39 snaps, several more than either Brandon Mebane or Alan Branch saw -- each saw 36 apiece -- in the defensive line rotation. Clinton McDonald got a heavy dose of action, logging 26 snaps, as Jaye Howard and Greg Scruggs were inactive.

At linebacker, Mike Morgan, after playing 36 snaps in K.J. Wright's stead last week against the Jets, didn't get on the field. Malcolm Smith saw 5 snaps in relief of Leroy Hill, who went out briefly with an ankle injury. Hill ended up playing 37 snaps.

All in all, a sub-par day for the defense, who only touched Ryan Tannehill one time - a Chris Clemons' sack. Bobby Wagner had a nice day though, and really should have had two interceptions, but his 2nd was called back because of an Earl Thomas roughing the passer penalty.