Picking only a top ten was super hard!

Share All sharing options for: Seahawks: Top Ten games from 2012

1. A shifting scene made up of many elements.

The magic word today was phantasmagoria, which I think is a beautiful word and also was completely apt for the article that I was planning to put together today. A list of the top ten games for the Seahawks in the 2012 season, which is absolutely a shifting scene of many elements but also full of fantastic imagery (Golden Tate, Sidney Rice, Russell Wilson, Richard Sherman, etc.) and definitely at times, illusions. Packers fans can attest to that.

Might as well let me sneak in just one HM, okay? This game ranks just outside of the top ten because the Cardinals pumpkined themselves into one of the worst teams in the NFL and seemed like a sure victory until John Skelton (Who has the arm of Tim Tebow without the legs or personality or fanbase) was knocked out of the game. This game only gets an honorable mention because the Cards are the worst. The only thing that could rank behind it this year is another loss to the Cardinals.

The Miami Dolphins lost to the Arizona Cardinals. The only thing good about this game is that Russell Wilson had a solid game on the road.

I could understand our offense losing games earlier in the year but this was the first real sign that our defense could lose games too. Seattle showed that they could come back from behind on the road in the fourth quarter and win and also that they could blow it and lose all in the same game. This was a terrifying loss for our future prospects because the Hawks couldn't hold a lead. Washington Redskins 2011 Loss Take 2. The Lions have a worse record than the Dolphins.

The Rams are not terrible this year but they are not good. You can't settle for field goals and turn it over three times and expect to win on the road, but it's also lame when you get beat by the kicker and punter. The Rams lost to the Dolphins and Jets.

If you asked me at just the right time of the day what teams Seattle beat this season, this is the game that I'm most likely to forget. I'm almost ashamed that Tony Romo was only picked off once. So ashamed that I ranked this game after a loss.

The 49ers are possibly the best team in the NFL and Seattle led this game in San Francisco at the half. They should have been up by more than 6-3, they shouldn't have got ramrodded by Frank Gore, they blew an opportunity to maybe take charge in the division. However, I thought that Russell Wilson turned his season towards the positive with his first half, when he handled his own against the 49er defense on the road on a short week. Since this game, Russ has been on fire.

I almost ranked this game at number six but picking out a road win is like going to the video store (because its 1999) and all they have is Failure to Launch. But then we found one copy of Roadhouse. Otherwise, the Panthers, though slyly okay at defense, are a team you should beat by more than the hair of your chinny chin chin. 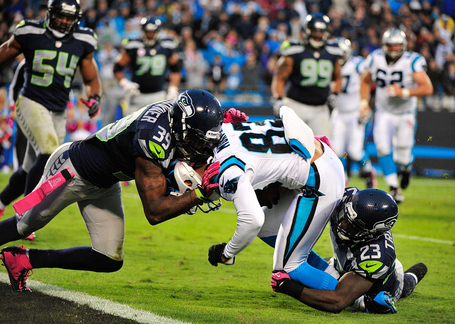 There's nothing finer than eating at your diner thoroughly destroying Rex Ryan, Mark Sanchez, and I guess Tim Tebow? An early case of the fumblesies made this game closer to begin with than it should have been. Still...

Though 20 points were doth allowed to the Vikings, it was all Adrian Peterson and he is the best running back in football, so no hard feelings. Otherwise, this was the most complete victory of the season and one that should have shown that this team could not be beaten by anyone. Except for the Miami flippin' Dolphins.

But Christian Ponder perfectly exemplifies how all non-Seattle quarterbacks have walked off of the Seattle field this season: 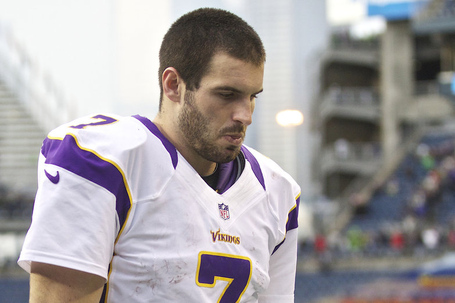 When I talk to Los Angelians about the Seattle Seahawks (or fans from other cities) they say, "Yeah, that defense is legit" or something along those lines. They might say the defense is "for real" or "really good" or "pretty cool, dude." I prefer anything that ends in dude, though. Why do they say that? Because this is the game that they saw the Seattle Seahawks play this season and yes, eight sacks on Aaron Rodgers, no touchdown passes allowed to one of the top three quarterbacks in the game, and shutting them down with Greg Jennings, will do that.

Sure, they remember how it ended, but they didn't forget that no matter how the game finished, it still finished by allowing 12 points to the Packers. But I'll remind you how it ended anyway. With what the white guy said:

Phew! I somehow managed to pick just my top ten favorite games from this season and put together one phenomenal phantasmagoria of phootball. Which games did I snub?!