The Seahawks & running back pass protection on play-action

Share All sharing options for: The Seahawks & running back pass protection on play-action

Russell Wilson's 6-yard touchdown pass to Golden Tate was, on several levels, a thing of beauty. The Seahawks trailed early after an embarrassingly bad defensive start, and the offense needed the neutralizer. On Seattle's first possession, two drops (well, one bad drop by Jermaine Kearse and another ball that Doug Baldwin laid out for that wouldn't have been a first down anyway) and a Russell Okung false start delayed the attempt to even out the score. However, after Marcus Trufant forced a Percy Harvin fumble (which he also recovered), the Seahawks were given a 2nd chance. They took advantage of it.

Marshawn Lynch ran twice to pick up a first down and the Seahawks were now on the six-yard line with a first and goal. If you're the Vikings, you're probably thinking your old friend Darrell Bevell is going to dial up a run in this situation, don't you? The answer for that can be found in their defensive formation/playcall. 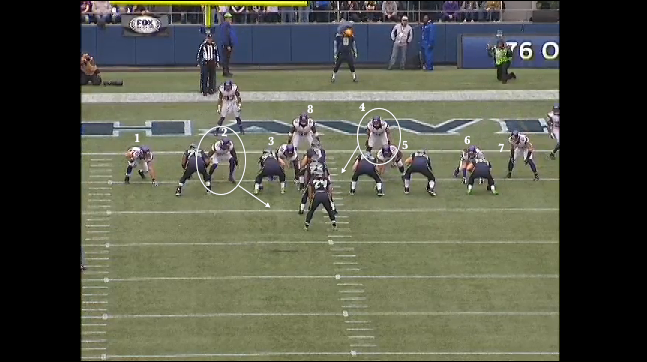 Eight men in the box as Seattle comes out of the huddle in 21 personnel, I-formation with Marshawn Lynch and Michael Robinson lined up behind Russell Wilson under center.

I've circled LB Erin Henderson (L) and (I think) LB Chad Greenway (R). One way to blow up the zone stretch plays that Seattle loves to run is to bring pressure through on the B and C gaps - or to the outside shoulders of the guard and tackle.

Teams will gameplan for this because Seattle's penchant to run left in these 'wide zone' plays is 2nd to none in the NFL.

In this case, Henderson is going to blitz though the weakside B gap. Greenway, on the right, is left manning the strongside and will either come in on a delayed blitz or bite hard on play-action as he comes in through A-gap.

Let's take a look at the play in full-speed and then break it down a bit. Just to really take in what I mean though, watch Michael Robinson and Marshawn Lynch:

Let's go through it.

Ball is snapped, and Erin Henderson comes through on the left side untouched. Michael Robinson, at fullback, meets him head on and does a superb job picking him up, taking him out of the play completely. Russell Okung, on the far left, does his job, Moffitt and Unger in the middle double down on the Minnesota DT, Paul McQuistan goes one on one with his pass rusher, and Breno and Miller double up on the edge. This looks like a run to Lynch right off McQuistan's left shoulder and that's what LB Greenway reads. There's always the chance he was in on a delayed blitz, but to me it looks like he's reading run hard and looks to hit Lynch in the backfield, as he initially takes one step back before crashing forward. 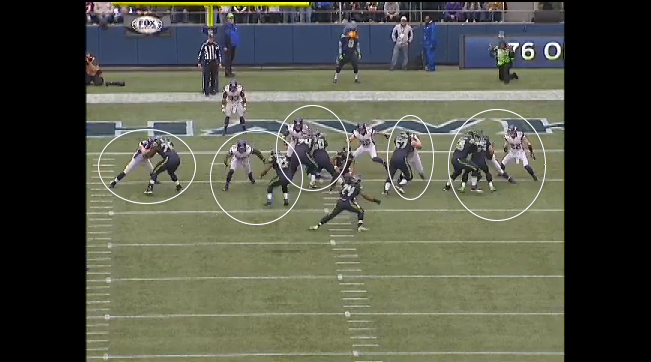 Lynch crashes into him hard - but as the play is designed, does not have the football. Wilson has pulled it up on a nice play-fake, and is now looking toward Sidney Rice on the slant. S Jarmarca Sanford has eyes on Wilson and initially reads the slant to Rice. This is a great job of Wilson to move the safety with his eyes/head, and Sanford bites in hard on Rice's route, allowing Golden Tate to run in behind him unabated.

See Lynch pick up Greenway. Wilson looks right to Rice on the slant. It draws in Sanford. 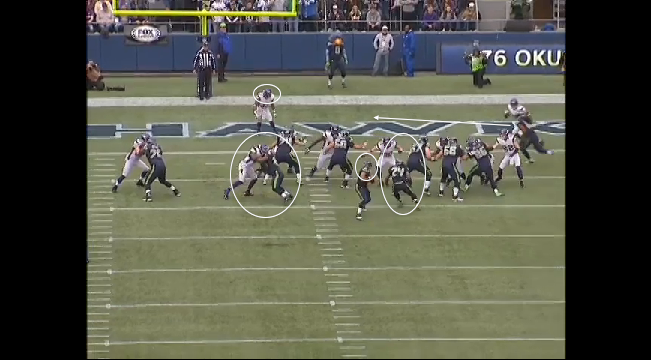 Now, see Tate running in behind him. Wilson's head and footwork are still following Rice across the field. 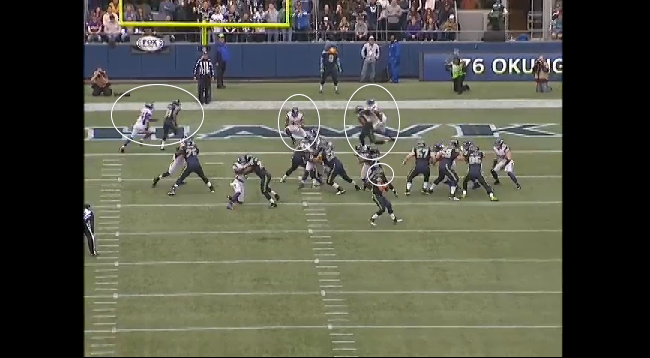 See Wilson's stance and gaze below. Sanford is in full-on pursuit of Rice now. 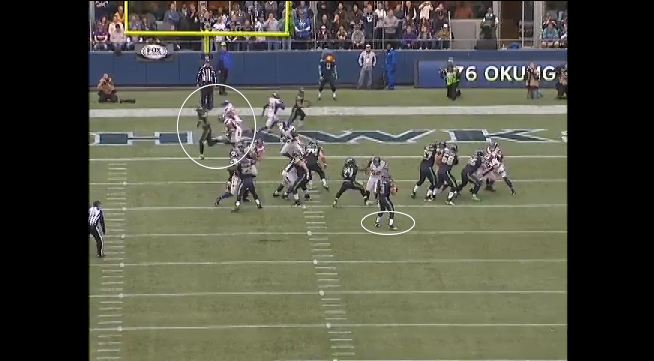 Here's a focused-in look at Wilson's footwork. You see his balance and base stay perfectly centered; Wilson doesn't step in the direction of his throw, but he's able to get more than enough on the throw to lead Tate perfectly. This kind of misdirection look-then-throw - selling a route one way and putting it out ahead of a receiver in another spot, is something you see a lot of the really good QBs accomplish, so it's an encouraging sign to see a rookie in Wilson already doing it to a degree.

Here's the behind shot as Wilson throws: 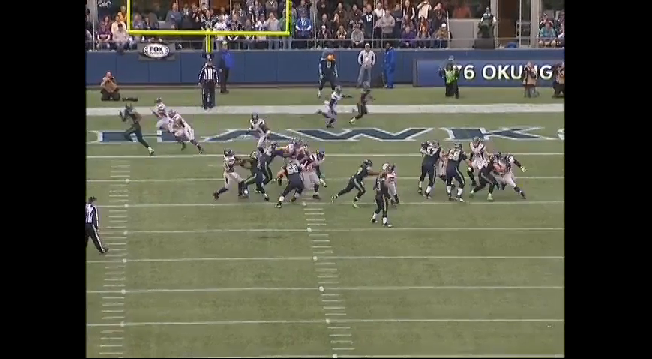 The pass is on the money to Tate, who makes a nice catch for the TD.

Re-watching it in full, it's remarkable how well Seattle's fakes work. The play-action fake sucks Greenway in and Lynch picks him up for a long enough time for Wilson to sit back and wait for the crossing routes to develop.

Wilson's gaze and footwork sells the route to Sidney Rice so well that middle deep safety Sanford is sucked up and then out as he takes Rice toward the sideline.

Wilson probably could've hit Rice here too with a well-placed ball, but went with the best option in this case - the option the coverage dictated - Tate, in single trailing coverage to the right.

Seattle gets New York this week and you know they'll be selling out to stop the run. With Rex Ryan at the helm you're sure to get some interesting blitzes thrown at you as well, so don't be surprised to see the Seahawks run a lot of two-back formations with blitz pickup responsibilities. With man coverage and single-high safeties in the secondary, Seattle will try to take advantage in similar ways to the play above.

Much thanks again goes to BigTrain21 for the excellent gifs he created this breakdown. As I've said before, his work really helps out in our analysis because watching a play in real-time makes it so much easier to appreciate all the moving parts of any given scheme.

Speaking of the Jets - if you're looking for Seattle Seahawks Tickets to the upcoming game at the CLink, make sure you check out Field Gulls' tickets page, brought to you by our partners at TiqIQ. It's a ticket price aggregator and it's honestly really excellent. With the Seahawks still in the playoff hunt, you may want to break open your piggy bank and say, "to hell with it, I'm going this weekend."