Much has been made of Russell Wilson's concerning habit of leaving the pocket early, particularly to the right, in the face of oncoming pressure. We've stressed here at Field Gulls, all along, that Wilson will need to develop as a pocket passer in order to become a consistent, high-level starting quarterback in the NFL and I certainly won't waver from that conviction. I think improvement has been made over the year, in this area, and there's a strong indication that Wilson's height issues can be mitigated to allow him to do this with creative scheming.

The overall vision of the offense is beginning to become more apparent and Wilson has begun to incorporate throws that weren't really even in the playbook to begin the year, most specifically, quick slants and dumpoffs over the middle. Wilson's pass depth/location breakdown going into the Detroit game was:

His pass depth/location breakdown, after efficient outings against the Lions and Vikings now sits at:

Chipping away at it. Similarly, I do feel like he's chipping away at that compulsive need to roll right outside of the oncoming left defensive end, and he's made some pretty impressive throws as he steps up into the pocket over the last two weeks. The two that come to mind instantly are two similarly styled laser p-rods to Sidney Rice running deep slants as Wilson stepped up and threw instead of breaking order and running.

While it's true that Wilson still, from time to time, will leave the pocket and roll out looking to keep plays alive instead of stepping up into the pocket, the other side of the coin has been that of late, his decisions to break the play and improvise have been more successful. I think this is a function of Wilson and his receivers learning to play together to make these situations more predictable and effective and conversely, less chaotic and random.

The Seahawks realized that they needed to improve the consistency of how often these improvised plays work - and to be honest, they probably hold Wilson's ability to scramble around and keep plays open as more of an asset than maybe Thomas or myself views it. Along with that belief, they've worked on QB-WR chemistry in this regard in practices and have made it a big focus.

Carroll mentioned this following the New England game, saying then that, "This week, we made a big point to the whole receiving crew and the quarterbacks and everybody that is catching the ball, that we have not taken advantage of Russell's movement. He's been getting out, and he's been running and making yards. And we made a big deal about it this week that there are huge plays there for us if we just look and fight harder to get open."

It's tough to practice a situation as random as Wilson deciding to scramble in the face of pressure, but I do think it's possible to improve the consistency of these types of plays by making it a focus and by getting to know tendencies. One of Russell's tendencies is to roll right while looking for a downfield option and effectively using the pumpfake to keep opponents off balance. We've seen Russ do it many times - sometimes he scrambles, sometimes he throws. The interception he threw to Rice at Detroit was an example of this and an example of a possible negative outcome, but there have been other instances where Russ keeps the play alive to pick up chunks of yardage where normally you'd see a sack.

Regardless, as Carroll pointed out above -- receivers need to work hard to keep the play alive -- work back to the football, double move downfield, drag parallel to Wilson or come back to him as a dumpoff option. Not coincidentally, Golden Tate and Sidney Rice seem to be the most adept at this (seriously, just watch Tate beg for the football with his two hands up in a ready position any time Wilson moves around).

On Sunday, Rice turned what could have been a sack or an unsuccessful scramble by Wilson on 3rd down into a touchdown, simply sticking with the play and seeing that Wilson was rolling out to the right.

On the broadcast view it's tough to see how nice of a play Sidney Rice makes by changing his route at the sight of Wilson leaving the pocket, in addition to Russell's deft pocket-stepup and strafe right, pump fake, and throw on the run for a touchdown glory). Let's go to the All-22 instead.

You can see below that John Moffitt has been badly beaten (with a nice spin move) and is now reeling. Sidney Rice is running a seam route from the slot, and is being marked by a linebacker. This is a nice mismatch. Wilson's primary appears to be Zach Miller though - and Wilson only has a chance to look toward him for a moment before he has to move to avoid being sacked. 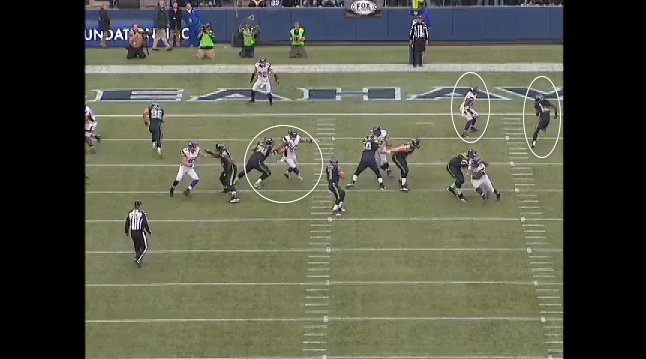 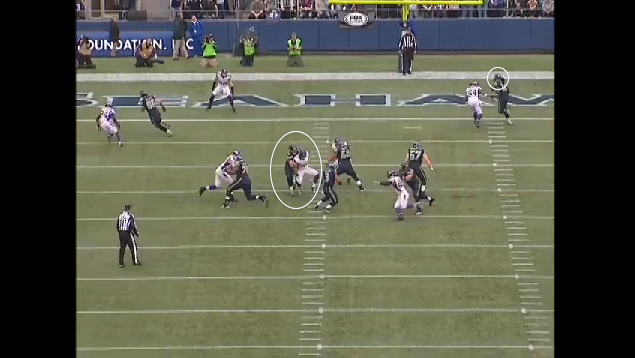 Key to the play - Rice looks back and sees Wilson take off to the right and jukes 3rd year LB Jasper Brinkley out of his jock. It's a bad matchup in the first place, but Brinkley has no chance once Rice cuts to the right. 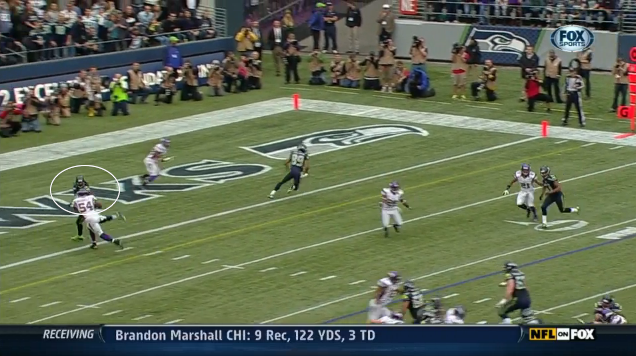 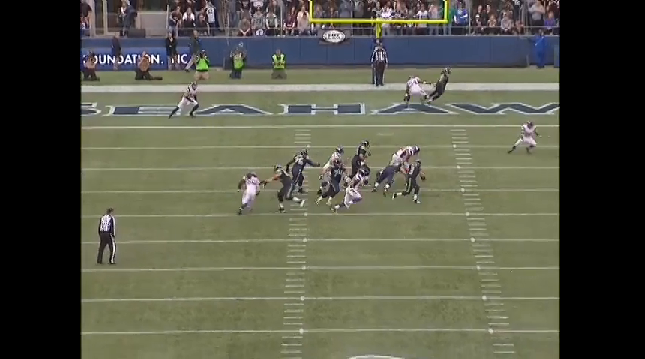 Wilson feeds him the rock with a quick throw. 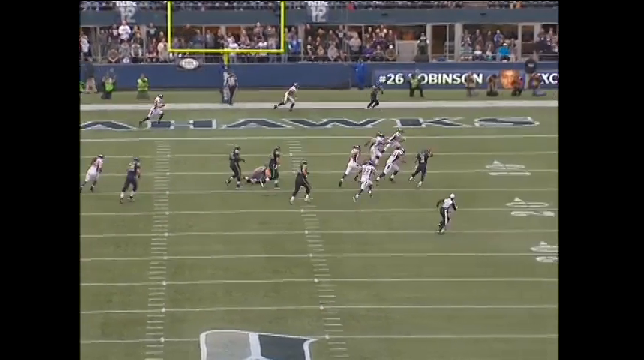 It's easy to break something down frame-by-frame and assign fault, but when you go back and watch the play in real time, it's always impressive just how quickly things happen. See:

Thanks as usual to BigTrain21 for the badass gif action.