"The Play-Pass is the one fundamentally sound football play that does everything possible to contradict the basic principles of defense. I truly believe it is the single best tool available to take advantage of a disciplined defense.

By using the play-pass as an integral part of your offense you are trying to take advantage of a defensive team that is very anxious, very intense and very fired-up to play football.

In highly competitive football, it is very unlikely that you will be able to run the ball so effectively that you will not need to do anything else to move the football. There is no question that having the play-pass, as a part of your offensive arsenal, can allow you to get a key first down or big chunks of yardage."

The Seahawks' offense, this season, has been characterized as a run-based zone blocking scheme that relies on play-action to take shots downfield and strike at opponents with chunk plays, particularly when teams start to sell out to stop Marshawn Lynch. I think over the past two games, the offense has become more balanced with short passes (possession passing) and a little more ingenuity and multiplicity in playcalling - screens, read options, etc., but by and large, play-action is a major, major part of the passing game. That's probably not going to change. No, let me correct myself: that's not going to change.

A team, and a quarterback, at some point, while trailing and low on time, is going to have to pass from the pocket or in the shotgun without the advantage of a play-action fake, because ultimately, teams are going to know you're not running the football. Outside of those situations though, play action can be relied on fairly consistently as long as you have the requisite ability to run the football.

The Seahawks used play-action exceedingly effectively in Sunday's win over the Vikings and apart from great execution, one of the main reasons that I would suggest for their success is that Minnesota defenders were overly keyed-up to stop Lynch. I made a comment in the Video Retrospective article the other day about Lynch blowing up a Viking defender and Nate astutely pointed out that Minnesota 'gave back as much as Lynch was giving.' It's true - if you watch the game, Lynch actually does take some fairly punishing blows and the Viking defenders were, for lack of a better word, amped up to stop the NFL's second leading rusher. They were getting in Lynch's face, talking trash, jumping around in celebration of big hits (even when Lynch picked up a first down on a run) -- and though Minnesota has what I'd call a disciplined defense, they were, expectedly, fired up to try and take down 'the beast' and any semblance of a Seahawks' run game.

That Vikings D has got pride, they've got a similar self-image as a tough, smashmouth football team that stops the run. As Bill Walsh says above, teams can take advantage of this over-eagerness to stop the run with the play-pass.

An anecdotal example of a play in which Pete Carroll talked about the proper use of play-action came early in the preseason, after a Matt Flynn interception against Tennessee. I remember vividly that Pete Carroll ascribed blame not to Flynn alone, but to (I believe) Robert Turbin for not running his play-action fake toward the line of scrimmage, instead picking up a blitz to the side of the pocket. This variation from the play-call spelled disaster for the Hawks.

When Turbin took himself out of the play as a threat to run, linebacker Colin McCarthy dropped back into coverage and right into Flynn's throwing lane, and when Flynn attempted to connect with his receiver on a quick slant, that ball was picked off. I'm not sure I had realized before that just how important a play-action fake is to the success of a call, and not only do the Seahawks game-plan to include it, they depend on it working.

The Seahawks ran a very similar play to that early in the fourth quarter on Sunday, but in this instance, an effective use of play-action allowed a throwing lane to open up so Russell Wilson could hit Sidney Rice with a quick slant for 13 yards.

Seattle leads 27-20 in this example, and are looking to get a clock-killing drive started. On 1st and 10 and with a lead, if I'm Minnesota, I'm thinking 'run' here. Robert Turbin is in the backfield next to Russell Wilson, and on the snap, they show what looks like their very effective read-option inside handoff draw - a play we've seen used with more frequency of late.

Instead of the handoff though, Russell Wilson pulls the ball back and fires a strike downfield to a slanting Rice. The major reason he's got a clear throwing lane though is that the play-action fake sucks LB Chad Greenway up to the line two or three steps and by the time he recovers he's way out of position.

"Linebackers are the players that are most affected by the play-pass because they have keys to read-whether the keys are to read the backs or linemen. Once they make a specific read, they are going to commit themselves to a run. The better job you do of faking, the more you can get a commitment from linebackers into the line of scrimmage.

It is important to note that all we are really talking about is to have the linebacker take a couple of steps-that is enough. It is not as though you have to baffle them and they come flying into the line of scrimmage and tackle a phantom ball carrier.

What happens is the effective faking may hold them (LB) stationary for a count or may get them to step forward or occasionally fill into the hole. It really is of no consequence how the linebacker is fooled because once he is hesitating and not quite sure, the damage should be done.

The receivers, meanwhile, are driving down the field and are working in behind them. The play-pass that holds linebackers and then throws between or behind them, is an excellent source for moving the ball for that critical first down.

In the case of Greenway, I actually kind of think this was the goal. Greenway had been getting up into Marshawn Lynch's face after tackles earlier in the game and you could tell he was generally, as Carroll might put it, jacked up to play some defense. The play-fake, directed at Greenway, worked like a charm and as Walsh points out, a couple of missteps is all it takes.

Unfortunately for the Seahawks, the drive stalled after this completion, and credit went to the Vikings for getting the Seahawks off the field. Seattle's defense returned the favor though, and the Seahawks forced a Minnesota punt from deep within their own territory. Russell Wilson and company took over at their own 47 and looked to pad their 7-point lead. The Hawks moved into Vikings territory quickly with a nice 23-yard pickup on a Marshawn Lynch screen play, but found themselves in a short 3rd and 1 situation two plays later from the Minnesota 31-yard line. Once again, play action would become a huge factor.

Seattle sells the P-A fake superbly - watch the linemen all move to their right in what's technically known as run-action. The linemen all do what they'd do on a real run play except Wilson doesn't pitch it to Lynch. He rolls out and finds Michael Robinson wide open in the flats for a key first down.

Watch the Minnesota linebackers and defensive line get sucked up and to their right. Greenway appears to recognize the misdirection but instead reads a naked bootleg, running to cut off Wilson and leaving Robinson alone. Zach Miller half-blocks half-runs a route but takes his playside defender well out of the action. LB Jasper Brinkley (#54) gets caught in no-man's land as he bites on the play-fake.

Just a well-executed play-action pass to preserve the drive and move to within more manageable distance for K Stephen Hauschka. The drive stalled but Hauschka hit the FG, to give Seattle a two-score lead. After Brandon Browner picked off Christian Ponder, Seattle retained the football at their 47-yard line with 5:27 remaining in the game and a ten point lead.

They had no intention of giving the ball back, nor did they have any intention of throwing the football. What followed was 10 straight runs (or nine runs and one Wilson scramble) before the Seahawks encountered their second fourth down situation of the possession - a 4th and 4 - on the Minnesota 15-yard line with just over a minute left.

Guess what play they ran to get that first down?

Hint: the exact same one. With similar results.

More from the venerable, the inimitable, Bill Walsh:

The defense has a difficult time accounting for the play-pass in terms of both preparation and actual game execution. If your line blocking and backfield faking is well-coordinated and well-executed, the defense must account for that in the running game. So, this is the one action that, along with other special plays, can disrupt defensive continuity.

This is why it is the best single tool in breaking a defense.

It can be can be run to gain a first down with a hooking type pass or it can be employed to score from down the field with a pass that goes beyond the secondary defenders. It is extremely difficult to stop a well conceived and executed play-pass unless the defense is concentrating on it.

And, when they begin thinking about whether a particular play can be a play-pass or a run, then the running game is enhanced measurably.

"Watch the quarterback here. You know what he does, instead of just turning around and handing the ball to Marshawn Lynch? He reverse pivots.

That action, in my opinion, helps to dictate this guy's flow (the OLB) out of the play. No reason he should get as out of whack, and out of his gap integrity as he does -- I think it's that little detail of Russell Wilson [the reverse pivot, that makes the difference].

Here's what Brock is talking about:

At the snap - Russell Wilson with a reverse pivot handoff. This immediately gets Erin Henderson's attention. He over-thinks it. 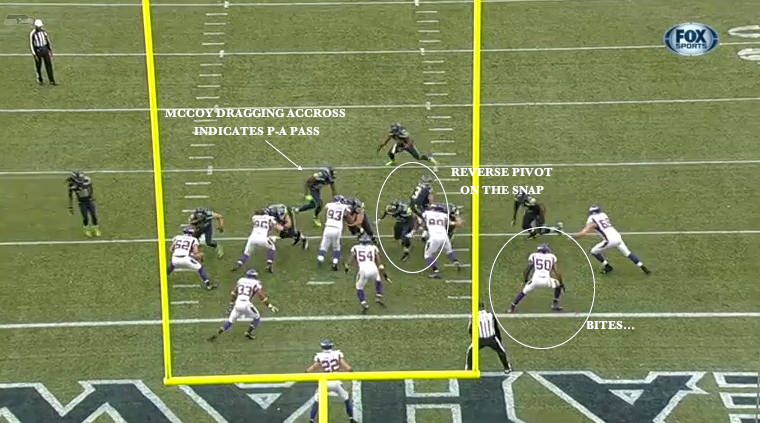 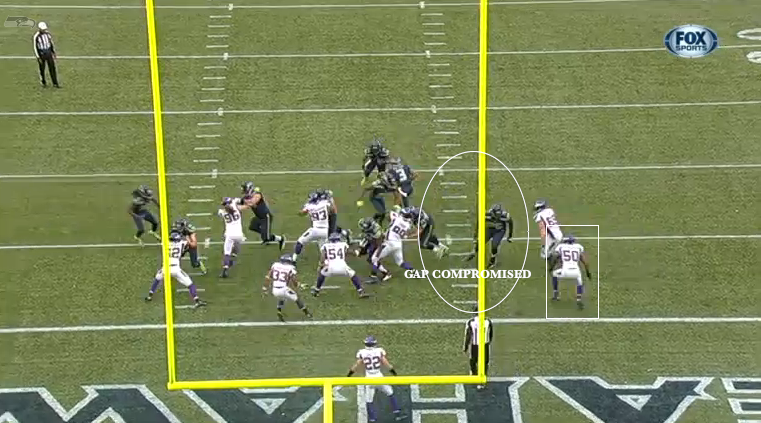 Lemuel Jeanpierre, in for an injured Max Unger, makes a nice block on #54 Jasper Brinkley.

(Just look at where Erin Henderson is standing. Just from the threat of play-action!) 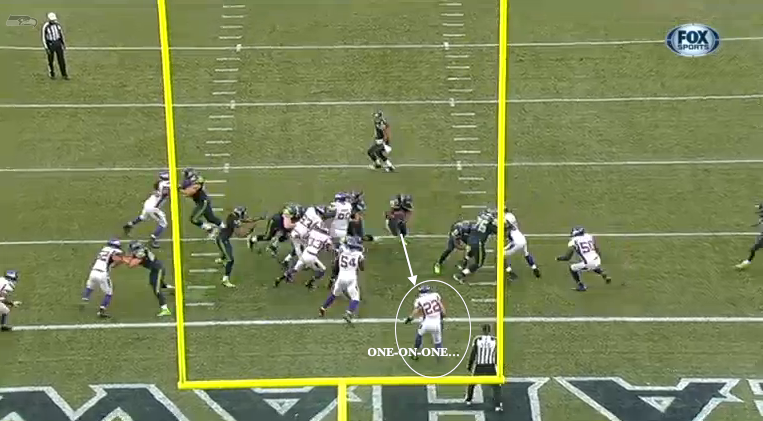 If this didn't get you excited about football I'm worried about you. In that spirit, if you're looking for Seattle Seahawks Tickets to the upcoming game at the CLink, make sure you check out Field Gulls' tickets page, brought to you by our partners at TiqIQ.

This post is sponsored by Jack in the Box.