The Seahawks, 49ers & the Pistol formation

Share All sharing options for: The Seahawks, 49ers & the Pistol formation

With the Seahawks matching up this week with Colin Kaepernick's San Francisco 49er offense, I thought it was important to talk a little bit about the Pistol formation. In most general terms, the Pistol is a truncated version of the "Shotgun" formation, but in its case, the quarterback is only about four-and-a-half yards behind center/line of scrimmage, instead of the customary seven or eight yards in a shotgun look. Further, in this look, the running back is directly behind the quarterback, instead of being offset, right next to him as you'd see in Shotgun.

The Pistol was pioneered by Nevada's Chris Ault in 2005, and was used extensively and successfully with Kaepernick in his career there. Now, of course, the 49ers run the Pistol looks, and the frequency of those looks has jumped up quite a bit over the past few games. It's almost a certainty that Seattle will have to deal with it on Sunday. Making the Pistol formation even more of a relevant topic for Seattle fans this week was that for the first time this season, I think, (probably ever, I'd guess), Seattle ran a couple of plays out of the formation as well.

First of all, I am not going to pretend to be a Pistol expert, so I scrounged up some articles that explain the scheme in great detail, which I'll link to below. Taking a few quotes from the different stories, though, should give you a general idea of why it's successful and why it's potentially an exciting wrinkle that the Seahawks could incorporate into their offensive toolbox. Just as the read-option package started as a trickle at some point midseason -- I wrote about the 'lead draw' back in Week 8, something that seems now like it was a precursor to the read-option -- I could see the Seahawks developing a package of plays that utilizes the look. Why not, really? It's a nice option for your team to have up its sleeve against teams that don't prepare themselves enough for it.

As its creater, Chris Ault, explained, the reasoning for placing the QB at 4 or 5 yards behind the LOS and the RB at 7 or 8 yards behind it, was that at those distances, it becomes exceedingly difficult for the linebackers to see the running back.

"I started calling the offense the Pistol -- the quarterback was the trigger, and the deep back was the hammer of the pistol," Ault explained to Yahoo! Sports' Doug Farrar. "We took the kids out on the field and ran all the tests on the depth of the back. We lined the tailback up three yards behind the quarterback (who was then 7.5 yards behind center). It was difficult to see the running back directly behind the quarterback three yards away. At five yards away, the linebackers could see the running back better. By having him seven yards deep, we can get the ball to him deeper than we would if the quarterback was under center."

Moreover, explained Chris Brown of Smart Football, it "removes any keys the defense can get from the alignment of the running back. If the runner is to the quarterback's left, any run play will probably be to the right."

"From the Pistol, the run could go in either direction. Moreover, the runner is deeper and set in the middle, so he can more closely emulate the downhill actions he'd take from under center. Relatedly, play-action can look more like traditional play action -- and thus hopefully be as effective as traditional play action -- than from the normal shotgun where everything looks more like a flash fake than anything else."

Talking big picture though, Brown notes, "the pistol gives a team the best of both worlds [pro style and spread style offense]: It has at its disposal all the Urban Meyer/Rich Rodriguez spread offense stuff, like the zone read and other gadgets, as well as the advantages of a "traditional" I-formation or pro-style single-back attack. Among these are that the runningback, aligning as he does behind the quarterback, tips no hand to the defense on the direction of the play, and the offense can get both good downhill running and play-action off those looks."

Chris Ault summarizes: "The back is hidden; he's completely concealed by our quarterback. When you have the traditional I back teams where the back is at seven yards it's a lot easier for those linebackers to key him. The beauty of the offense is that if you're an I-formation team like we were before we converted [and like the Seahawks are at their core], it fits into the same schemes that you were running. You just get the ball to that back sooner on run plays.

In other words, I love this.

Let's take a quick look at two plays the Seahawks ran out of Pistol formation looks.

The Seahawks come out in a Pistol formation. Someone can tell me if I'm wrong here, but I'm fairly certain this was the first time they've done it this season. Seattle in 12 personnel, two tight ends to the left and two receivers to the right. Incidentally, Seattle really seems to like to put their receivers on the same side these days, and just off the top of my head, it seems to be working well. Sidney Rice in particular seems to thrive in his 'move' role as the Z. 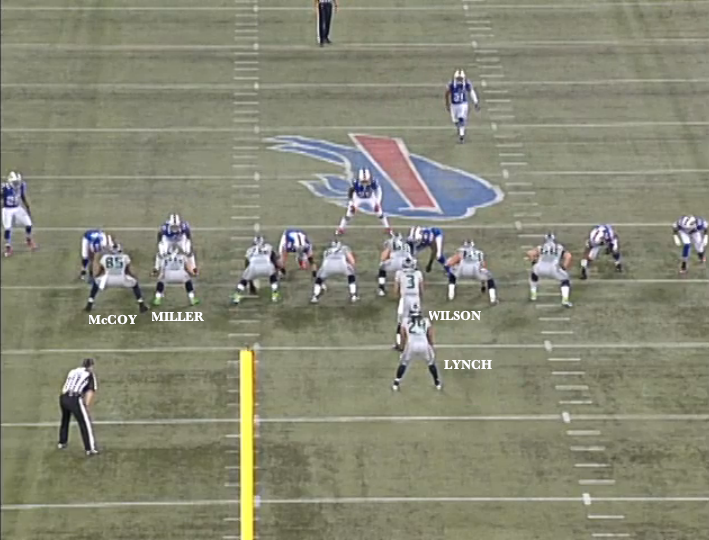 At the snap, everyone goes left, except for Breno Giacomini, who reaches out to block Mario Williams, and Anthony McCoy, who down blocks on the DE. 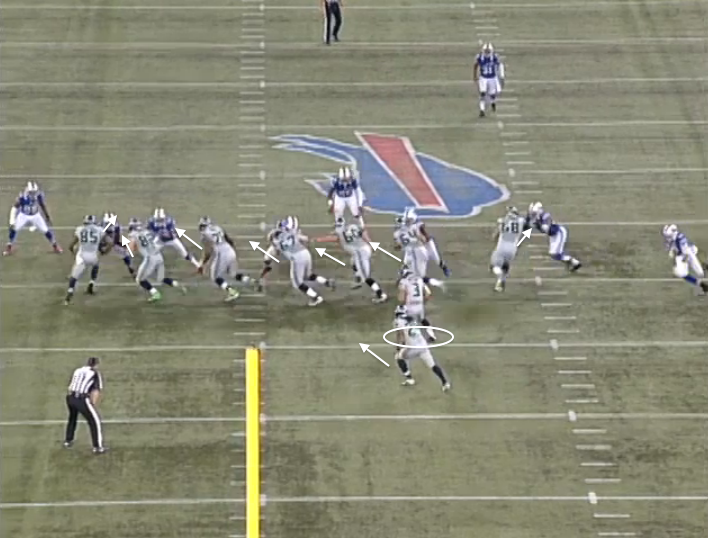 The key here, for this particular play, is the speed at which Russell is able to hand off the ball to Lynch. You'll see it below, but both players barely take two steps before the ball is in Lynch's hands. With the zone-stretch to the left, I have to imagine it's extremely difficult to see what the shit is going on behind the line for any Buffalo defender here. Gaps are moving, big bodies are flowing left, and with the Pistol look, it makes it tougher for linebackers to see Lynch, or the handoff. Just look at the sight lines below. 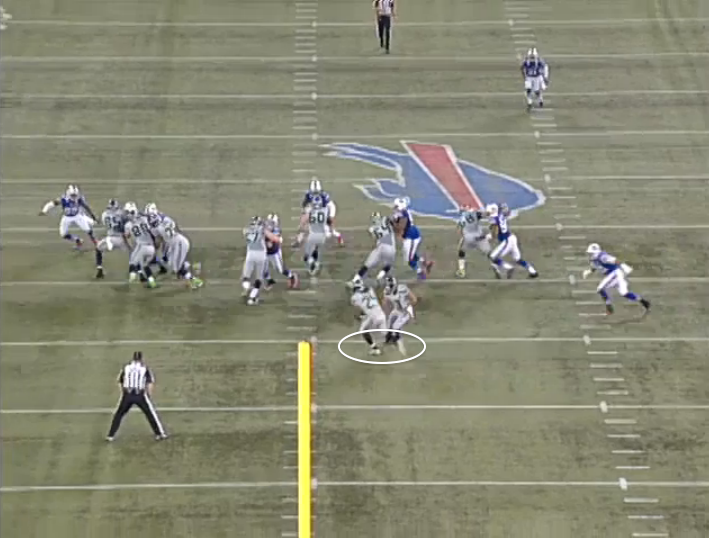 McQuistan sets a nice block, and Lynch works off of it. 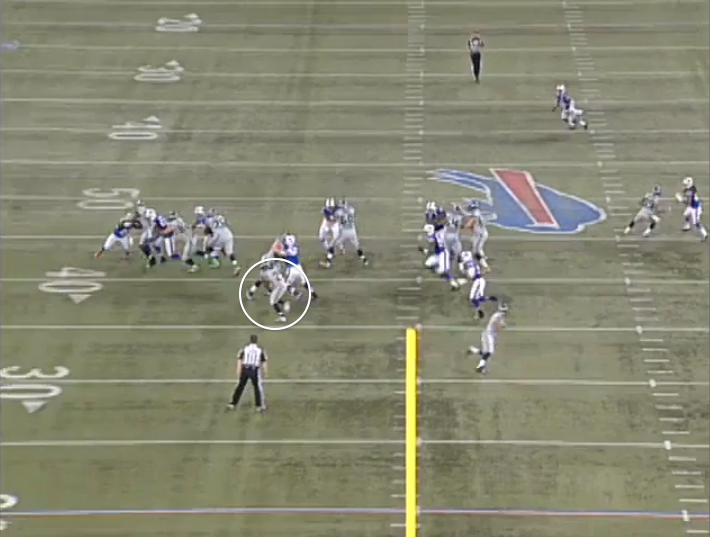 Nice 6-yard pickup on 2nd and 4. The key is the quickness of the handoff, the difficulty in seeing the ball/runner, and the fact that Lynch can run downhill instead of receiving the handoff at a standstill. This allows him to find a crease and hit it at a faster speed.

Now, this next play is kind of hard to decipher, to be honest. It's such a clusterf*ck of mistakes by the Bills that I actually don't have a good idea exactly whom was to blame.

I have the suspicion that it's #23 Aaron Williams that blows his assignment or gets the wrong coverage in mind. Let's look.

Pre-snap. Seahawks in their Pistol look, but have balanced out the formation by putting Rice on the left, tight. Williams is matched up with Tate at the top of your screen, playing press. 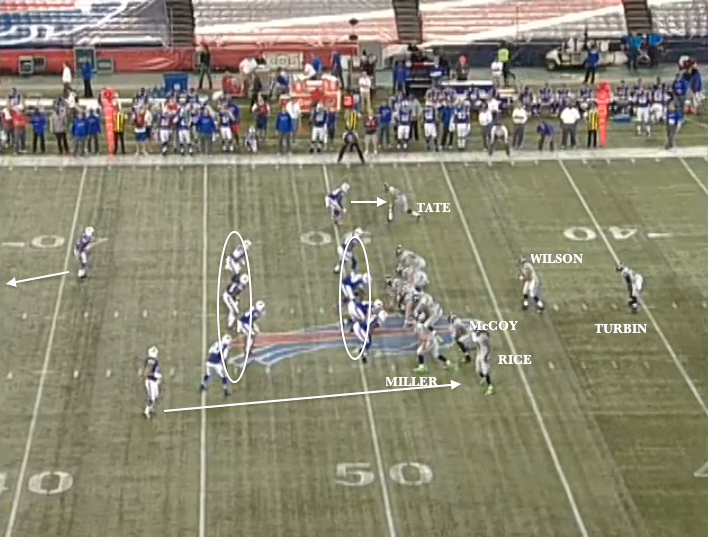 At the snap, the Bills drop back into a cover-3 look with man-underneath coverage. Only, Williams mirrors Tate as Tate runs a post-route, leaving the entire right side of the field wide open for Rice.

Below, you see the deep safety and CB Stephon Gilmore drop back into their thirds of the field. 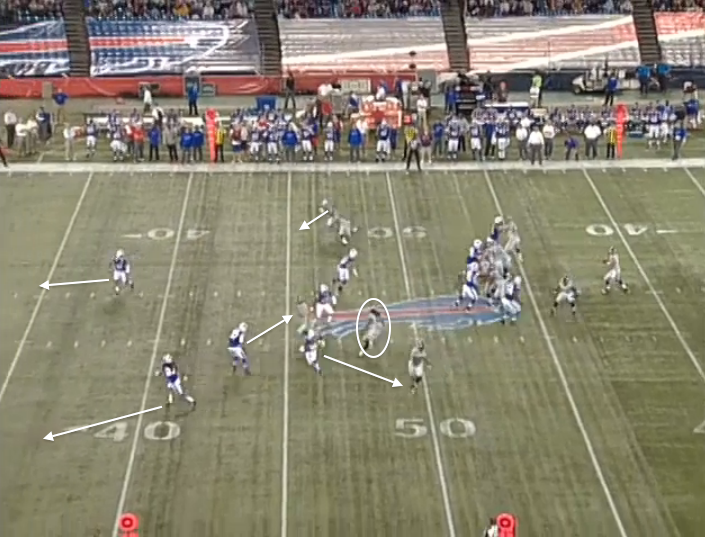 Rice drags underneath though, and as no linebackers pick him up, he ends up really, really, ridiculously good looking wide open. You can see that Williams is now trailing Tate with his back to that side of the field, and Rice is heading in that direction. 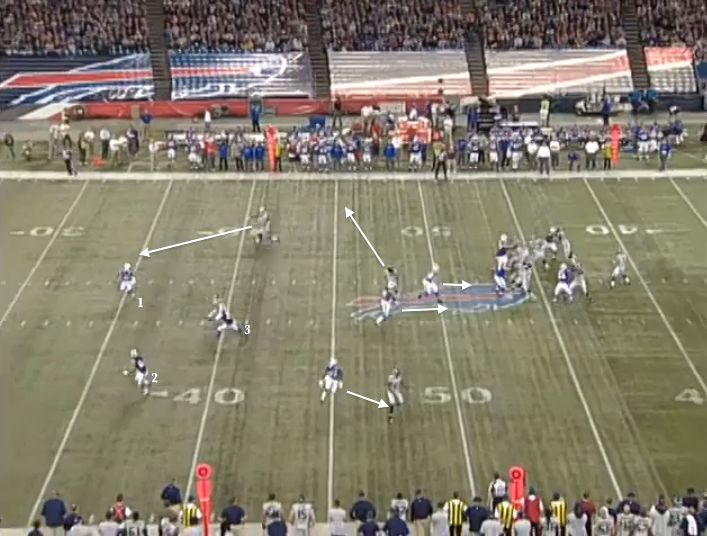 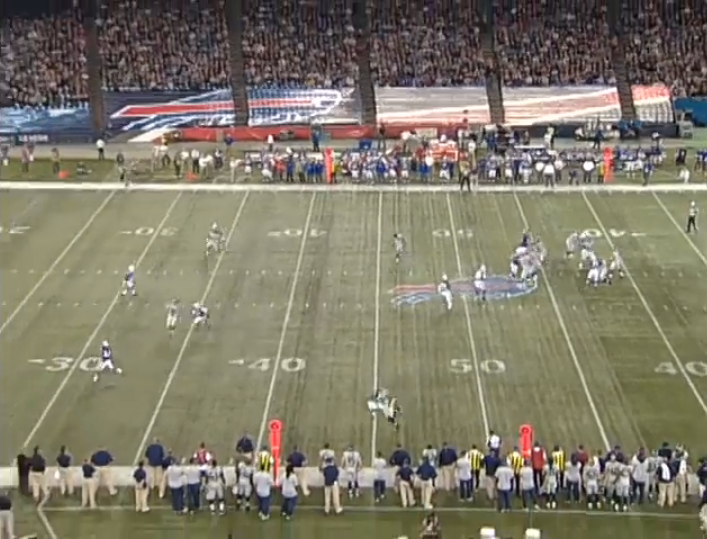 Let's check it in full-speed:

Now, here's where I think the Pistol look comes into play. Normally, without the threat of a run, linebackers would be getting into 'their drops' and trying to cover a certain area or mark a certain player. In this case, both of Buffalo's linebackers crash hard to their right - probably thinking another run was coming downhill, as the Seahawks did in the play above (and two or three possessions earlier in the game). Linebackers must key into certain signs, and quickly, and with both TEs to that side, and in the same formation as earlier, they were undoubtedly looking to take away that play.

Rice is able to cross, unabated, and the passing lane is bereft of any Bills' defender. Now, once Rice is past the intermediate level of the defense, I would guess that Aaron Williams probably should have been there to stop him from gaining 40-odd yards, but the misdirection caused by the Pistol look just may have provided Seattle the opportunity for a big gain.

The 49ers use much more variety and multiplicity in their Pistol looks, often times giving Kaepernick three or four options - to hand off, throw, or run it himself. They do read-option looks, triple-option looks, and it's going to be a challenge for Seattle to defend them. As ESPN's Liz Mathews pointed out on twitter, the 49ers have used pistol 33 times over their last two games, compared to only 30 times the first 12 games of season. With Kaepernick running the show, they've run more than 80% of the time from the Pistol, and have averaged 6.4 yards per rush. Yeesh.

Greg Cosell stated it simply and succinctly in his FantasyGuru.com Week 15 film notes, "Kaepernick gives the 49ers offense so much more than [Alex] Smith," and that the Niners "now have a multi-dimensional passing game, plus the dimensions of the "Pistol" and the read option." No me gusta.

Luckily, Bobby Wagner, playing at Utah State for the past several seasons, has seen Nevada's Pistol plays many times, and hopefully should have the defense a little bit better prepared.

Follow @FieldGulls on Twitter | Like Field Gulls on Facebook | Find Seattle Seahawks Tickets | If you're looking for tickets to any of the upcoming games at the CLink or looking to catch the Hawks on the road, make sure you check out Field Gulls' tickets page, brought to you by our partners at TiqIQ.

FOOTBALL OUTSIDERS: Innovative Statistics, Intelligent Analysis | Cover-3: Saturday Night Special
"When I presented this to my staff, they looked at me as if I had lost my marbles."

Deconstructing: Nevada's 'Pistol,' by any other name, would fire as sweet -
Since the dawn of the spread in major college football, we've seen a rise in two related phenomena: New and fairly innovative "spread" schemes (a good thing), and nicknames for those schemes (less so). In the '90s we had Nebraska's "Black Shirts" and the Arizona "Desert Swarm," while now we are treated to slightly less euphonic choices, like Texas Tech's "Airraid," the various "spread 'n shreds" of Rich Rodriguez, and now, the uninspiring "pistol" at Nevada.

American Football Monthly, Copyrighted Material
Without uncertainty, two of the most popular schemes in high school and college football today are the inside/outside zone play and the play action that results from it. Imagine the offensive productivity you’d have by being able to combine those two concepts while adding an element of misdirection? It’s exactly this kind of productivity that Chris Ault, head coach at Nevada, is having with the Wolf Pack since converting from an "I" formation to his own invention, the Pistol offense.

American Football Monthly - The Magazine For Football Coaches
We take an in depth look at the complementary play action pass game the Wolf Pack uses as a change-up when teams start to load eight or nine in the box to stop the run.