The Seahawks' game-winning drive in OT, part I

Share All sharing options for: The Seahawks' game-winning drive in OT, part I

The read-option is a play that we've broken down here a few times and it's something that the Seahawks are using situationally to exploit over-aggressive defenses or just to simply provide a different look to teams. The Seahawks aren't going to turn into Oregon and adopt the read-option look as the foundation of their offense, but it's a nice weapon to have at your disposal to be used when a weakness presents itself. That happened on Sunday, but it's not going to happen every week, I don't think.

The Hawks tried the read-option a number of times against Miami but the Dolphins' front-seven was extremely effective in stifling it. To take away the look, a defense has to be patient and disciplined, set the edge of the pocket, and Miami was able to do that consistently. Against Chicago, however, toward the end of the game, Russell Wilson and the Seahawks' coaching staff began to notice the Bears' defensive ends crashing hard to take away the run, and this is why Seattle looked to their read-option package of plays on their final two drives.

"I think that as the game went on, I continued to tell the coaches, and they saw it too as well," Wilson said after the game. "Hey, especially in that last 4th quarter [drive] and in the end of the game as well, the read options wide open, pretty much."

Seattle used the read-option look* on three plays during their 12-play, 97-yard go-ahead drive in the fourth quarter, and those three plays netted 30 yards. After the Bears inexplicably tied the game up to send it to overtime, the Russell Wilson, Marshawn Lynch and the Hawks leaned on the read-option look even more, showing the look on 8 of 12 plays, including the first two, which netted 25 yards on the ground, and the final play, in which Wilson faked the read option and passed to a dragging Sidney Rice for the game-winning score. I'll get to that. But first, I want to talk a little bit about how Seattle found themselves into the Bears' red-zone, looking to score a touchdown and end the game.

*It's notable that not all 'read-option' looks in the play package are actual 'reads'. As Greg Cosell points out in his notes from this week's film study, several of the Seahawks' read-options were disguised as reads but were really designed runs, either to Wilson or Lynch. Keep that in mind as I breakdown the following two plays -- maybe it's in nuance or just experience watching film in which Cosell can discern this, but for me, I'm not sure whether these are designed runs to Wilson/Lynch or 'reads'.

After winning the coin toss and after a touchback on the kickoff, Seattle took over at their own 20. They went right at the Bears with the read-option look. Rather mercilessly.

Let's take a look at a few keys to the play.

The Seahawks come out in "12" personnel, two tight ends and one running back, with Sidney Rice in the slot left, flanked by Golden Tate on the wing. Anthony McCoy is split out on the wing, and at 6'5, 250 or so, he's matched up now with 5'9, 185 pound cornerback Tim Jennings. This is why 'move' tight ends like Anthony McCoy are en vogue in the NFL these days - for creating matchup problems - and the nice thing about McCoy is that he's at least adequate at blocking in the open field. He certainly has a big size advantage, if nothing else.

The Bears counter in a cover-2 nickel look - the slot corner playing off of Rice a little bit, with two deep safeties and Brian Urlacher and Lance Briggs patrolling behind the line. 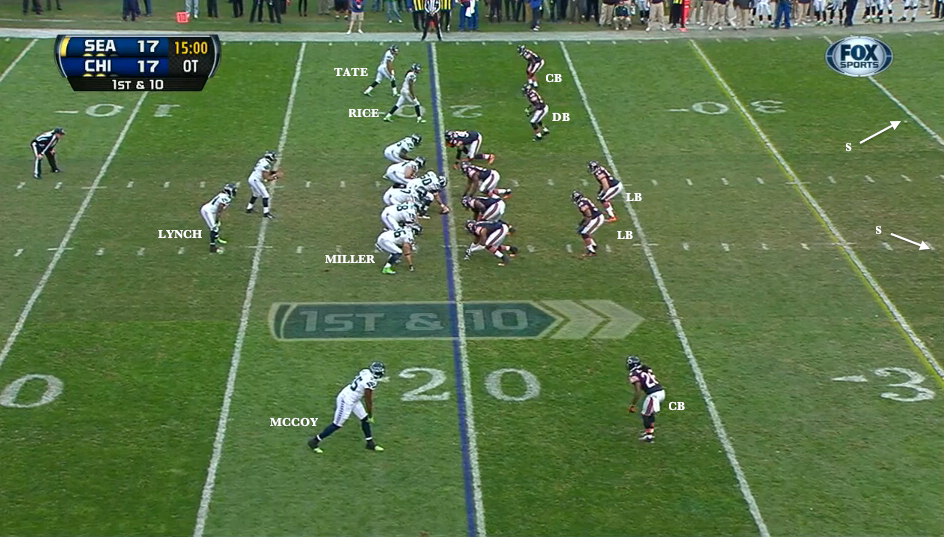 As the ball is snapped, DE Israel Idonije crashes hard in the direction of the Seahawks' zone-left look. Wilson reads his movement quickly (or the play was called this all-along, based on previous plays in which the Bears DE was crashing inside), and keeps the ball. The one wrinkle that the Seahawks incorporated in this look this week was to use Zach Miller on the play-side to reach-block the linebackers on the second level. In previous iterations, you'd see Miller either run out in a route or crack across the formation to take on a DE. In several instances on Sunday though, Miller would simply step out into the 2nd level and look to seal the outside linebacker to his side, toward the middle of the field. These little 'tweaks' in how the Seahawks look to block defenders make it very difficult to defend and hard to adjust to when you're in overtime with limited time between plays.

Anyway, also integral to the play, on the outside, Anthony McCoy will look to seal his defender toward the sideline. 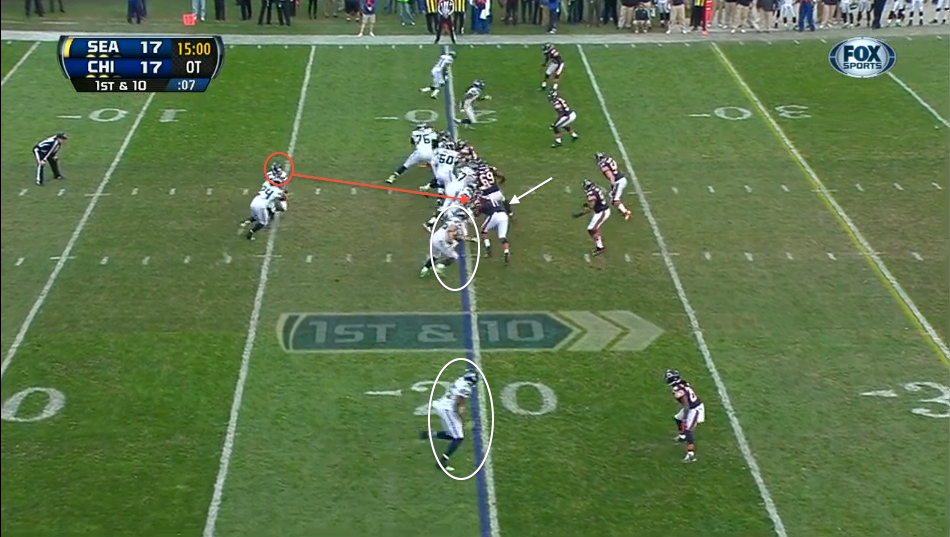 Idonije crashes hard toward the 'playside', if Lynch was indeed going to take the handoff. However, Wilson pulls the ball back and takes off the other direction. Idonije is now totally out of the play and this leaves Lance Briggs as the 'containment' player to the open side. 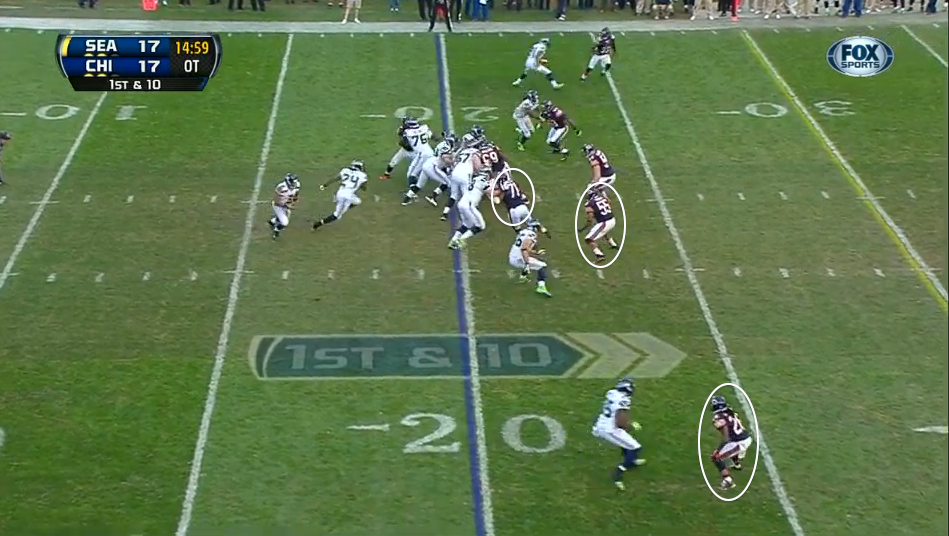 Miller does his job. So does McCoy. 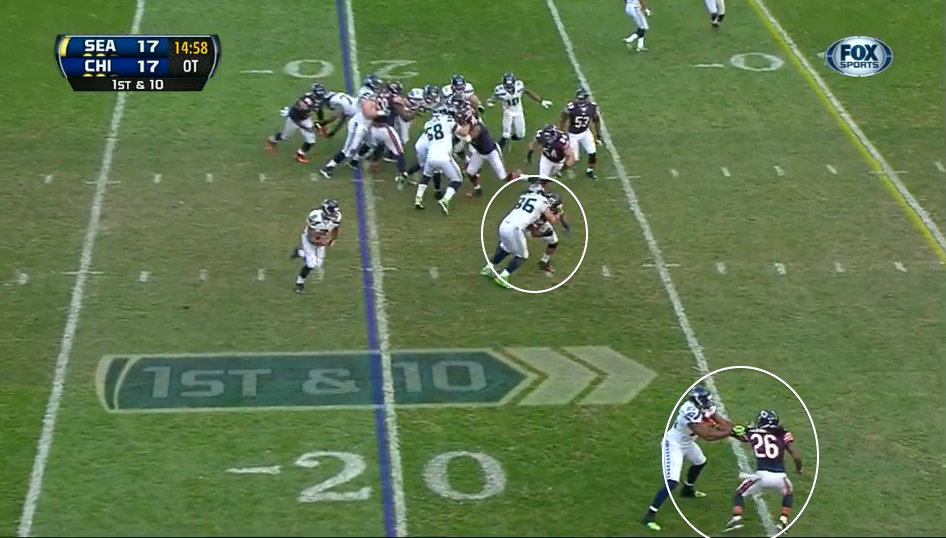 Wilson scampers for 11 yards. Let's watch it in real-time. Make sure to watch #71, DE Israel Idonije, as he runs himself out of the play. Watch Miller too -- he doesn't even bother looking like he's going to run a route, he just gets in a position to make a block for Wilson on the keeper. This was something that Miller did on almost every one of the read-option looks in overtime.

The very next play - because that worked so well, and maybe because Seattle is devious or something, they run the exact same look. Just to piss off Idonije, I think.

Now, on this play, Seattle brings out their old trusty 'lead draw,' which worked really well against the Lions, and which I broke down in more detail HERE. Essentially, it's a read-option look that pulls RT Breno Giacomini off the DE, (knowing that this time, Idonije will probably be less aggressive and frozen on the edge), and pulls him through the hole to take on the middle linebacker on the second level.

When the Seahawks come out in the exact same personnel grouping and exact same formation, the Bears pull S Craig Stelz up a little bit to meet Wilson should Wilson keep it. 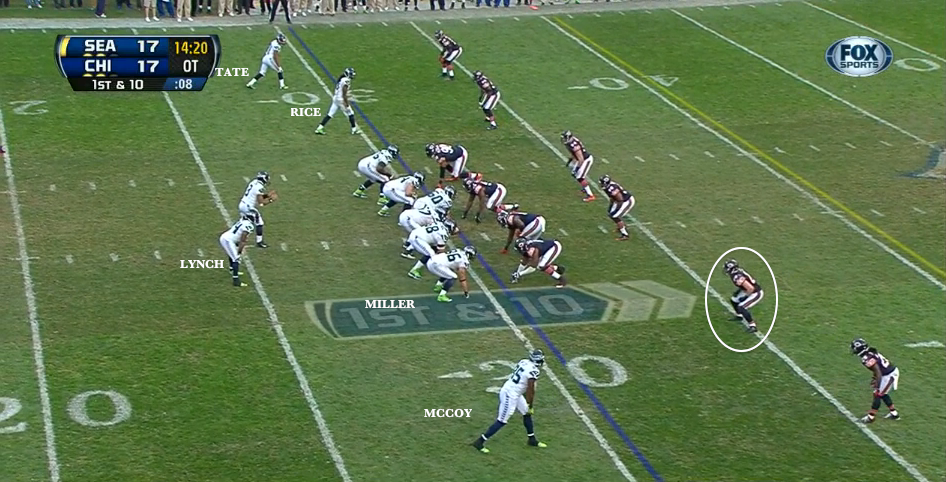 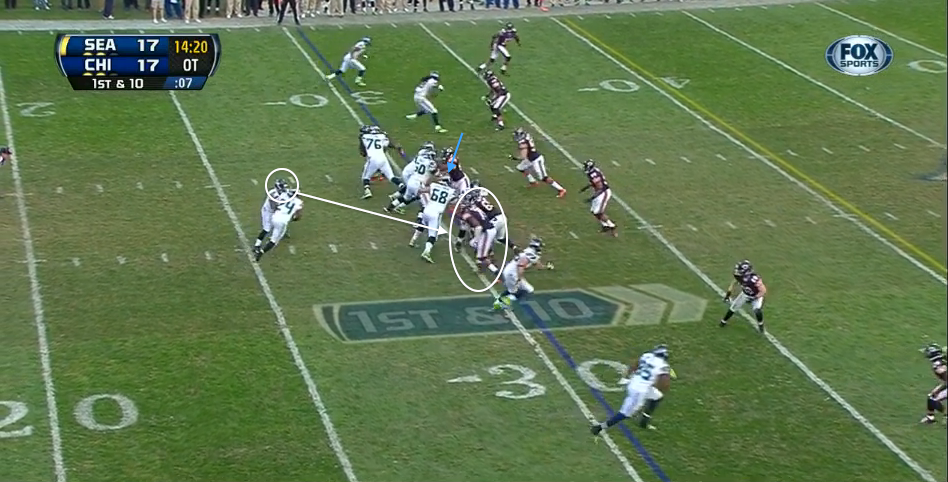 Idonije stays home versus Wilson, which allows Lynch more time and space to hit the hole. 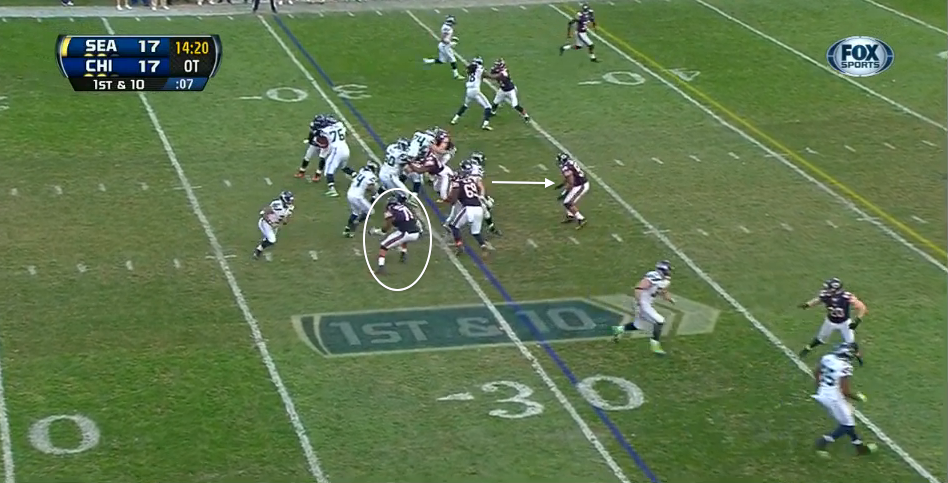 Breno seals Briggs to the sideline left, and Lynch deftly strafes through the newly created lane into daylight. He picks up 14 yards before he's slowed up by the Bears' secondary. 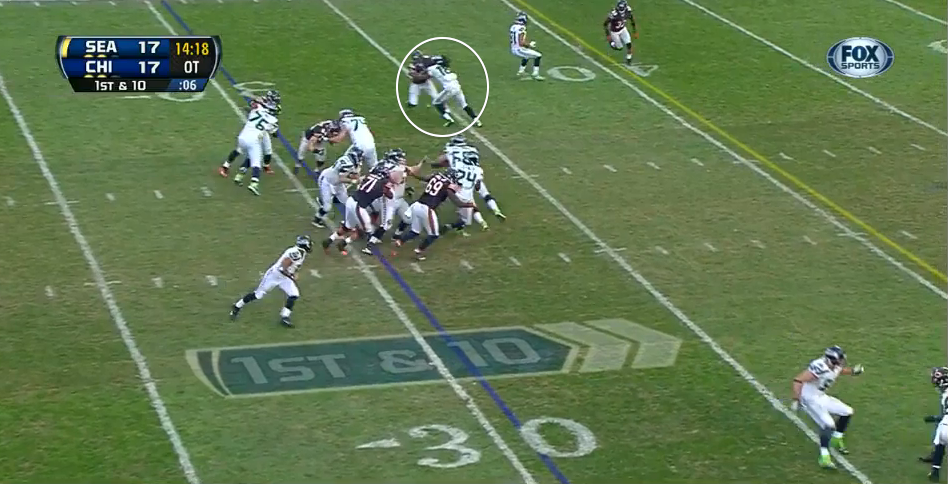 So, now the Seahawks have gained 25 yards on two quick plays and are threatening the Bears' side of the field. Not shabby.

The Seahawks run the exact same play (this time out of '11' personnel) for a third time straight, but as Breno pulls left, DT Henry Melton charges forward and into the backfield to grab ahold of Lynch. Idonije stays home on the edge as well, so this play would've been dead, regardless.

Seahawks line up in "21" personnel in I-formation. On play-action, Michael Robinson delays his release and then leaks through the line to the right. Wilson hits him with a low pass, which Robinson collects, and then turns downfield. He slows up before lowering his shoulder and trucks into CB Tim Jennings. The collision injures Jennings' shoulder but Robinson has picked up the lion's share of the 15 yards to go. Brings up a 3rd and 2.

Seahawks go back to the read option. Julius Peppers crashes hard on Lynch as Russell Okung downblocks. You can see him in the backfield below. 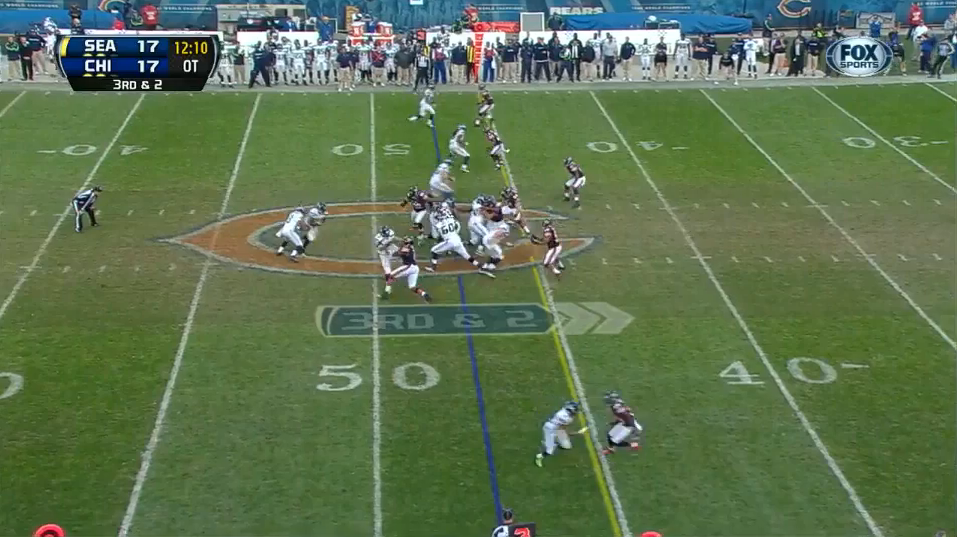 Wilson simply holds on the the football, using excellent downfield blocking by both Zach Miller and Sidney Rice, and picks up the first down, beating Urlacher around the edge and diving forward for five yards.

Seahawks run their normal zone scheme out of '12' personnel and pick up three with Lynch.

This is the play where Marshawn Lynch essentially steals the ball from Wilson as Wilson tries to pull it back. This will happen from time to time in the read-option. Literally - this is about the only time I've ever seen Wilson show frustration in his body language, and it's only for about a split second before he looks back into the sideline for the next play. The announcers talk about how much room Wilson had on the outside had he kept the ball. This sets up a big third down and five.

The camera crew, at this point, continually zooms in on Idonije as he huffs and puffs trying to get his wind. The Bears' defense looks gassed, and the big DE is the poster boy on this drive.

Seahawks go to "11" personnel with Tate, Rice, Doug Baldwin, McCoy and Miller; empty set shotgun. Bears rush four drop seven and Wilson has no where to go so he scrambles. And, he scrambles well against a tired-looking defense and seemingly easily picks up 12 to preserve the drive.

Seattle is now at the Bears' 25 yard line. They're within field goal range, but under the overtime rules, only a touchdown ends the game. I'll break down their next four plays in Part II.

Follow @FieldGulls on Twitter | Like Field Gulls on Facebook | If you're looking for Seattle Seahawks Tickets to the upcoming game at the CLink or looking to catch the Hawks on the road, make sure you check out Field Gulls' tickets page, brought to you by our partners at TiqIQ.