Share All sharing options for: The Seahawks' game-winning drive in OT, part II

Yesterday, I broke down the first eight plays of the Seahawks' overtime drive - those eight plays got them from their own 20-yard line to the Bears' 25, putting them into a position to threaten for a field goal or even the game-winning touchdown.

Before I break down the next couple of plays - I wanted to point something out about the way the Seahawks run their offense. This is something that Thomas has brought up in the past here and it's something that I've talked to Davis about as well, and Hsu brought up a sort of theory he has about it to me last night over text. He said to me - paraphrasing - that he's convinced that Seattle will run right into an 8- or 9-man front, - no audible, no check with me's - purposefully, once or twice per 'key' drive and maybe 4 or 5 times a game as a 'set-up' for their play-pass downfield stuff.

In this case, a set-up run into a heavy, run-stopping front may 'fail' in gaining yards but can succeed in getting the run defense amped up and looking to stuff it the next time they see that personnel look and their run keys associated with that particular play. This, perhaps, is what allows the Seahawks to run play-action so well and it's why Seattle is seemingly so stubborn to continue running the same zone-stretch plays over and over when they don't appear to be getting much traction with it. It's about the linebackers keying into certain looks - biting, or even just hesitating - thus allowing over-the-top play-action passing and deep, kill shots to be there when the Seahawks really need them.

Bill Walsh talked about this - saying that the play-pass "is the single best tool available to take advantage of a disciplined defense."

Well, I don't know if this is exactly what happened on Sunday, but when you look at the playcalling late, once the Seahawks were threatening the redzone, Bill Walsh's words about play-action definitely come to mind. I'll explain.

The Seahawks run zone-left out of the i-formation with Michael Robinson lead-blocking and pick up one yard. Bears showed an 8-man front, dropping a safety up into the box. 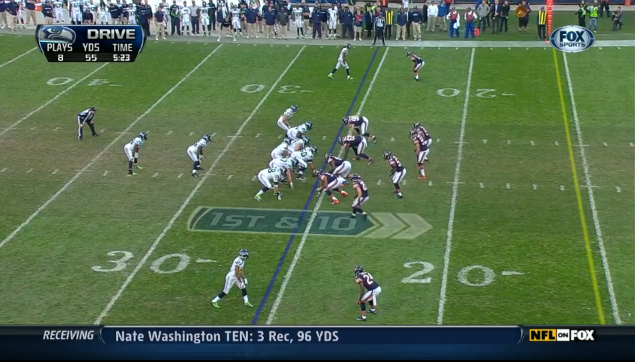 Ideally, with this run, I think the Seahawks would have liked to pick up at least 2 to 3 yards, obviously, but with Bevell and Carroll, everything feels like a 'set-up' for the next play or two.

Seattle goes back to the read option look - a package of plays that really helped them move the ball well on this drive. Henry Melton blows past John Moffitt on the snap though, and the handoff to Lynch is dead in the backfield. I heard Hugh Millen kind of blasting Moffitt's play earlier in the week, and this play was a good example of why.

It's now 3rd and 10. This isn't 'on schedule' by any means, and the Bears' defense is now really fired up, with Melton leading war cries, hooting, hollering and moving his arms about as the two teams come back to the line for the 3rd down play.

Tough to know what the Bears might be thinking in this spot. My guess is that they're keyed in on stopping a pass, but wary of the Seahawks' conservative nature and thus still keeping a draw play or a read option in the backs of their minds. Remember too, Wilson's movement ability on a key third down earlier in the drive had extended the Seahawks' possession.

The Bears are in a cover-2 nickel look, two deep safeties and a 3rd corner eyeing Doug Baldwin in the slot.

The Seahawks get creative with their zone-read package, and incorporate a nifty moving pocket look to give Russell Wilson time to let the play develop downfield and/or to give him a little room to improvise if need be. You can see the routes below, and note that RG Paul McQuistan will pull left at the snap and be replaced in pass pro to that side by Robert Turbin. 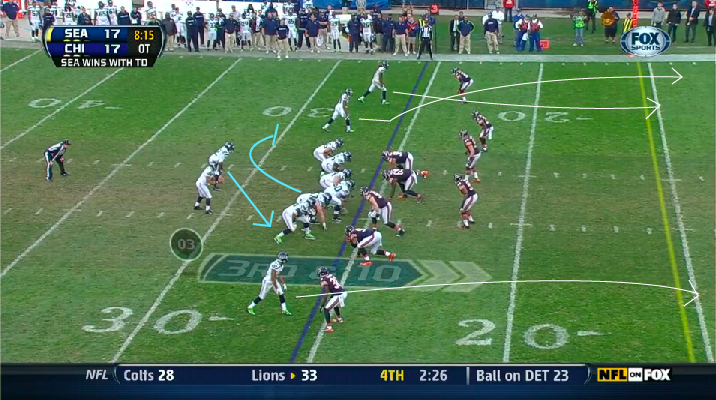 Ball is snapped, and the zone-read fake handoff freezes the linebackers. You can see all three intermediate defenders flat-footed in the frame below. McQuistan pulls left and the TE to the left, Zach Miller, sets the edge hard in conjunction with Russell Okung. He's hidden from view below. 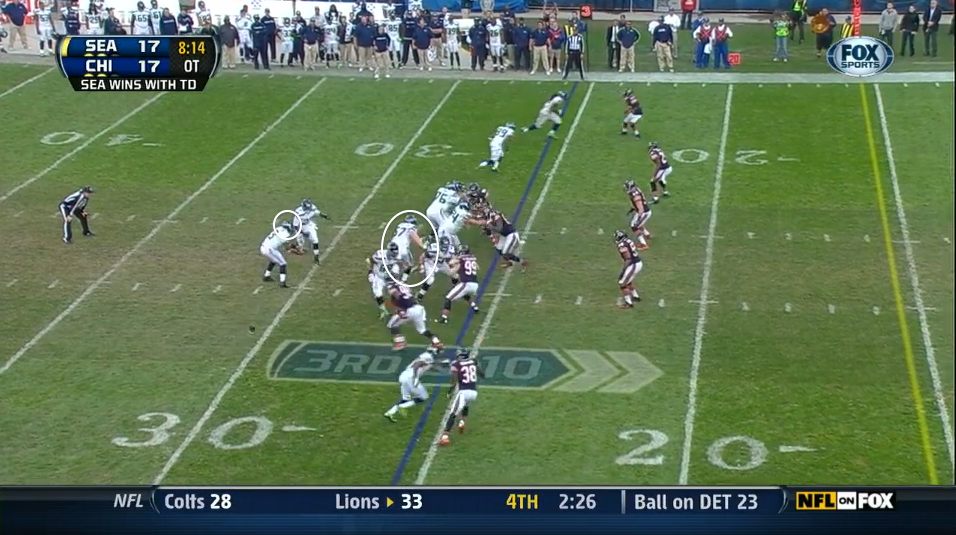 Okung lets Julius Peppers crash hard to the inside - almost like a trap play would do - and Wilson is already rolling out to the left. Now Brian Urlacher and Lance Briggs, along with the nickel corner Kelvin Hayden, are all still keying into Wilson in the case he's going to run it. This, more or less, allows Doug Baldwin and Sidney Rice to release into their routes to the left without much coverage underneath them. 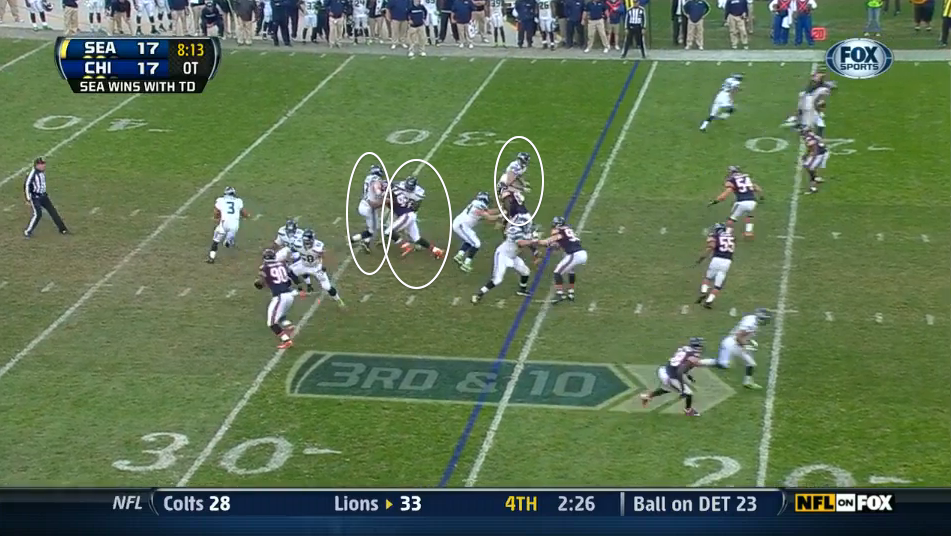 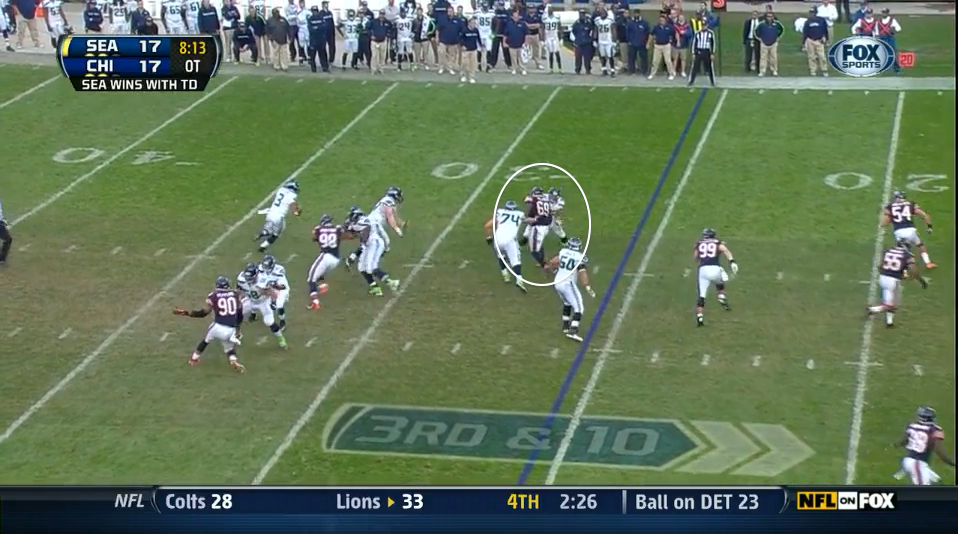 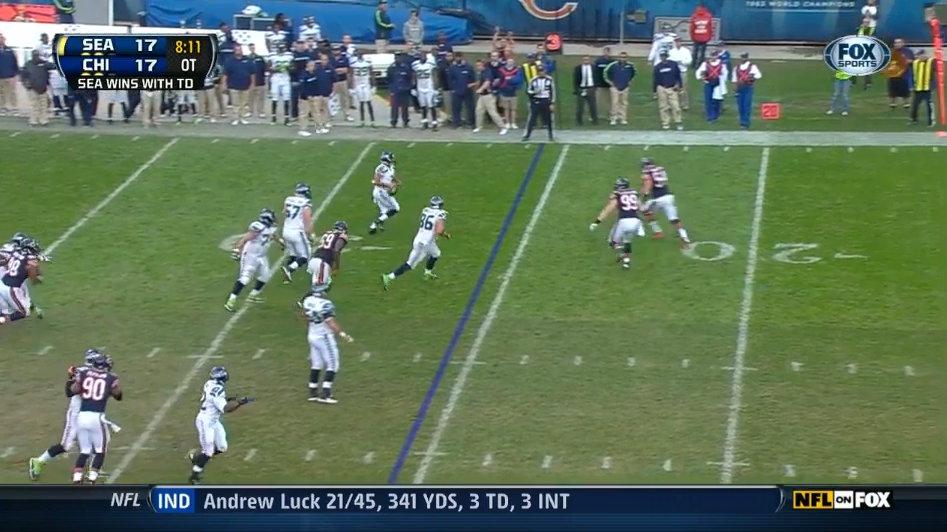 Wilson jogs left and completes a pass to a waiting Doug Baldwin on the sideline. Here's the All-22 - note the movement of the Bears' defenders on the snap. More than anything, I just think it's a pretty cool concept to incorporate the read-option look into a moving pocket half rollout type of protection concept. Wilson gets plenty of time to let the play develop against an aggressive and keyed up defensive line.

Just a moment's hesitation from the linebackers' corps at the snap. More importantly, note how well the route combinations between Sidney Rice and Doug Baldwin work in conjunction against the cover two. With Charles Tillman responsible for the flats, and the safety to that side responsible for the over-the-top stuff, there's a void in the middle for Rice to sit down into. Heydon's drop isn't quite deep enough and he's sufficiently worried about Wilson that he allows Rice to get a little deeper.

Not a real issue in this play though, as Baldwin gets away with a slight shoulder pushoff on an off-balance Tillman that sends the cornerback sprawling to the ground and leaves Baldwin wide open. 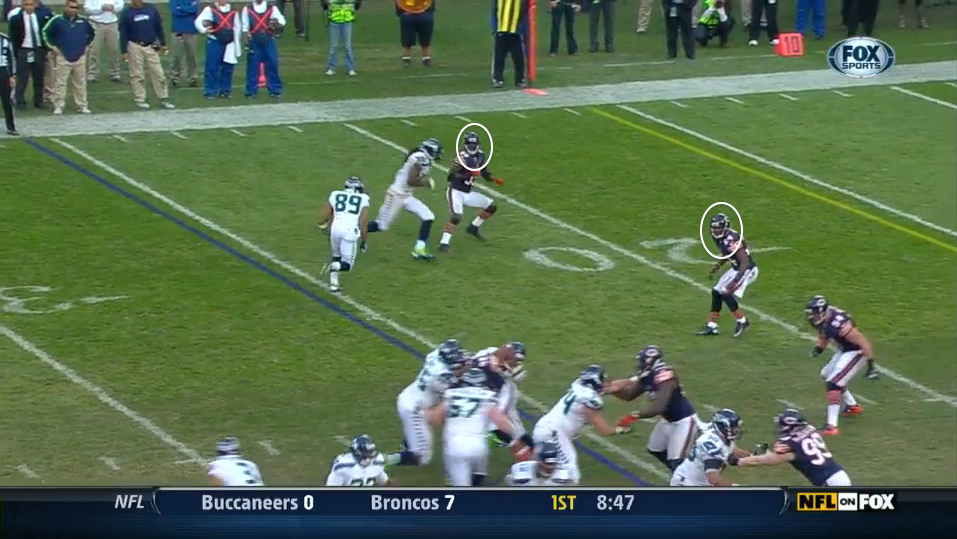 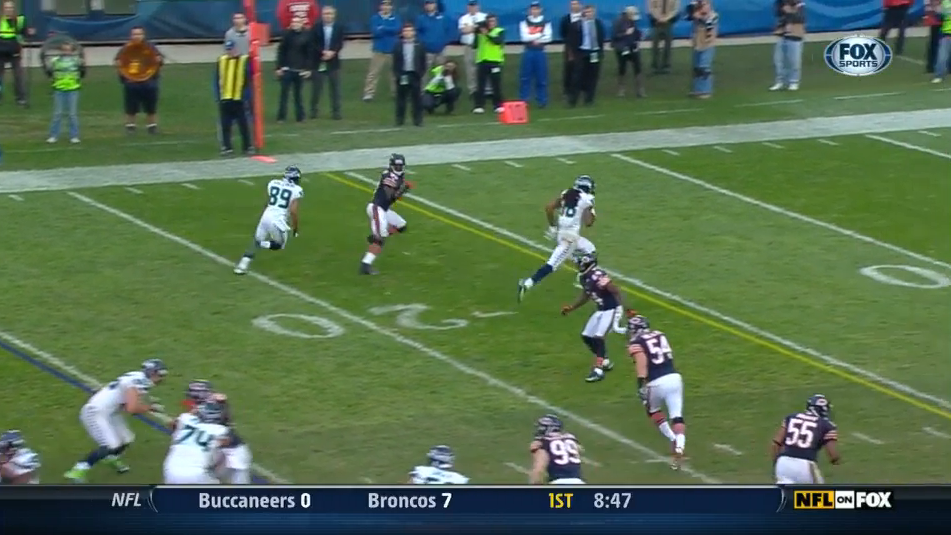 This is the point in which Baldwin gets away with one. 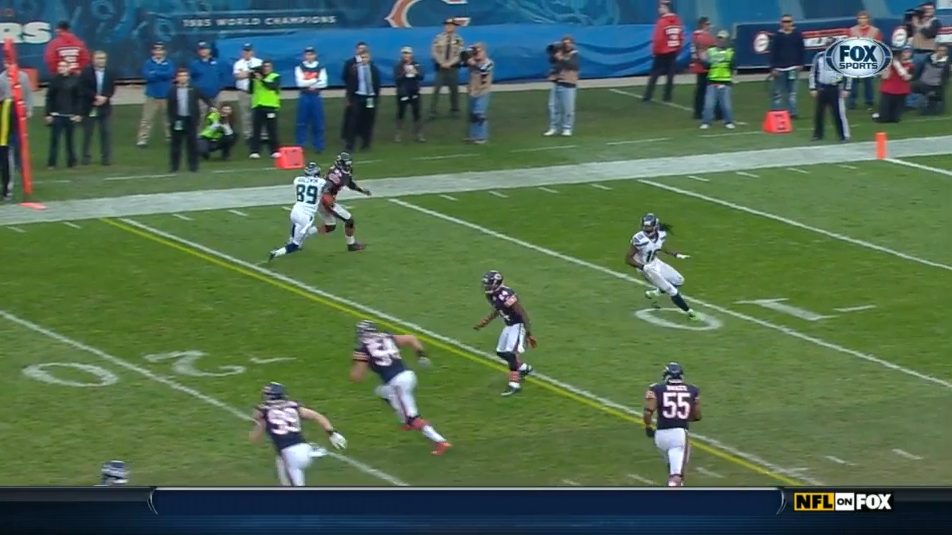 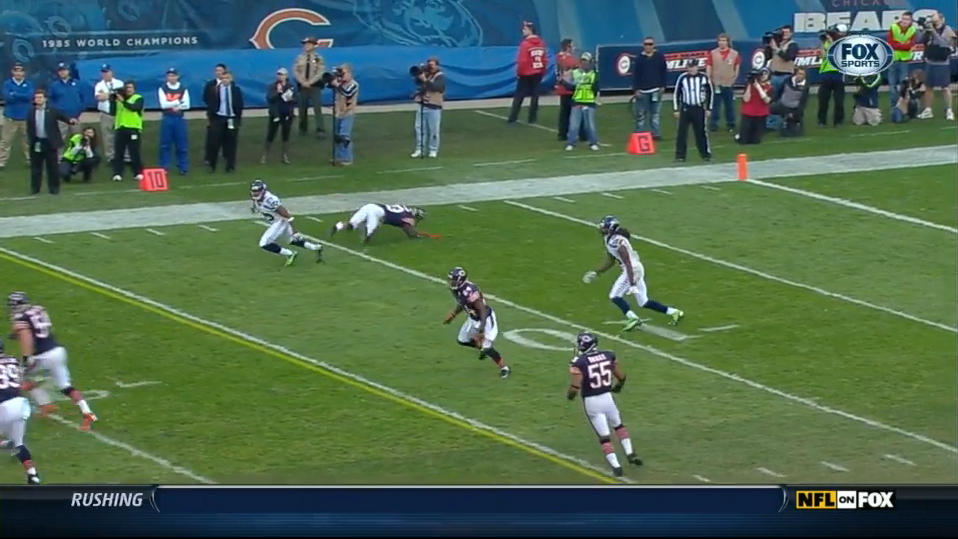 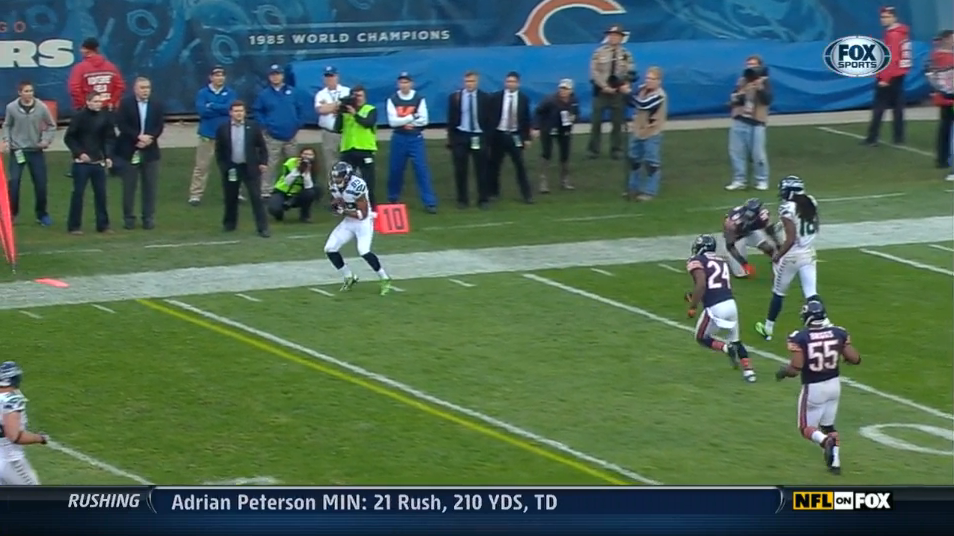 First down Seahawks. Urlacher now out with a hamstring injury.

Seattle is at the 13-yard line. On the previous five first downs in the drive, Seattle had run the ball, either out of a normal i-formation look or more commonly, out of a read-option look. Moreover, the Seahawks' final nine first downs, the week prior against Miami, had been runs. The Bears watch tape. They study tendencies and habits. They know better than we do that Seattle tends to get conservative in the red-zone. How many Bears' players, at this point, are going to be thinking a run is coming?

This, my friends, is why 'set-up' plays, into the teeth of 8- or 9-man fronts, though seemingly useless or stubbornly ineffective, can come in handy at key moments. I'm not necessarily saying that Darrell Bevell is a genius for his body of work in play-calling because sometimes this stuff just doesn't work, but this particular play-call - play-action underneath dragging route to Sidney Rice - was pure, unadulterated, perfection.

To set this play up, let's go back to Bill Walsh, because he's a little more credible than I am.

"Linebackers are the players that are most affected by the play-pass because they have keys to read-whether the keys are to read the backs or linemen. Once they make a specific read, they are going to commit themselves to a run. The better job you do of faking, the more you can get a commitment from linebackers into the line of scrimmage.

It is important to note that all we are really talking about is to have the linebacker take a couple of steps-that is enough. It is not as though you have to baffle them and they come flying into the line of scrimmage and tackle a phantom ball carrier.

What happens is the effective faking may hold them (LB) stationary for a count or may get them to step forward or occasionally fill into the hole. It really is of no consequence how the linebacker is fooled because once he is hesitating and not quite sure, the damage should be done.

The receivers, meanwhile, are driving down the field and are working in behind them. The play-pass that holds linebackers and then throws between or behind them, is an excellent source for moving the ball for that critical first down.

Seattle is going to run play-action again out of the read-option look. Not all 'play-pass' looks are going to feature Russell Wilson under the center, dropping back with his back to the line of scrimmage, faking the handoff and then turning around to find his open receiver. You can do play-action out of many looks, and the Seahawks' use of it out of shotgun looks has increased in frequency and in effectiveness.

Below you can see the route combinations. Golden Tate will run a post-route that will be of integral importance to the play, and Anthony McCoy is going to just run a 9-route that will take the corner to that side deep into the endzone. This is very important too.

Most important though: Rice's route is absolutely a thing of beauty as well. 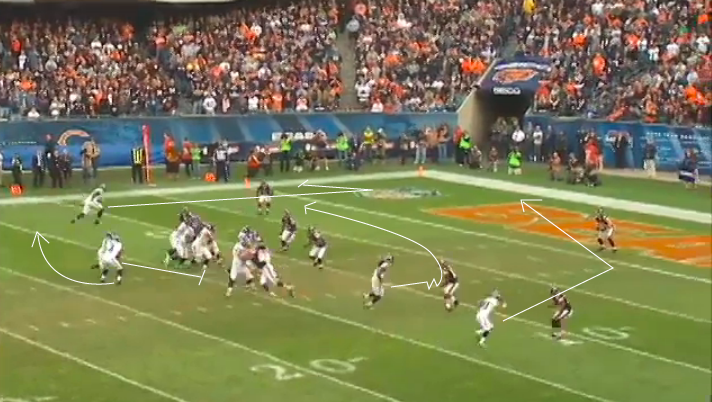 Ball is snapped, and holy crap look at those linebackers bite on the play-action. Tim Jennings has to mind Anthony McCoy to the top of your screen, and Charles Tillman, in coverage of Rice in the slot, has to mind both Rice and the incoming 'run' -- it's why playing the slot is a very, very difficult proposition.

Rice sets up his route like a pro. He comes off the line almost jogging, with his hips squared up to Tillman and approaching him like he's going to seal-block him to the sideline. Rice is a good run blocker, actually. I think he's pretty underrated for this, and his block in the slot on the nickel corner, had helped set up a Russell Wilson first down just several plays earlier on a 3rd and 2 read-option keeper (shown here). 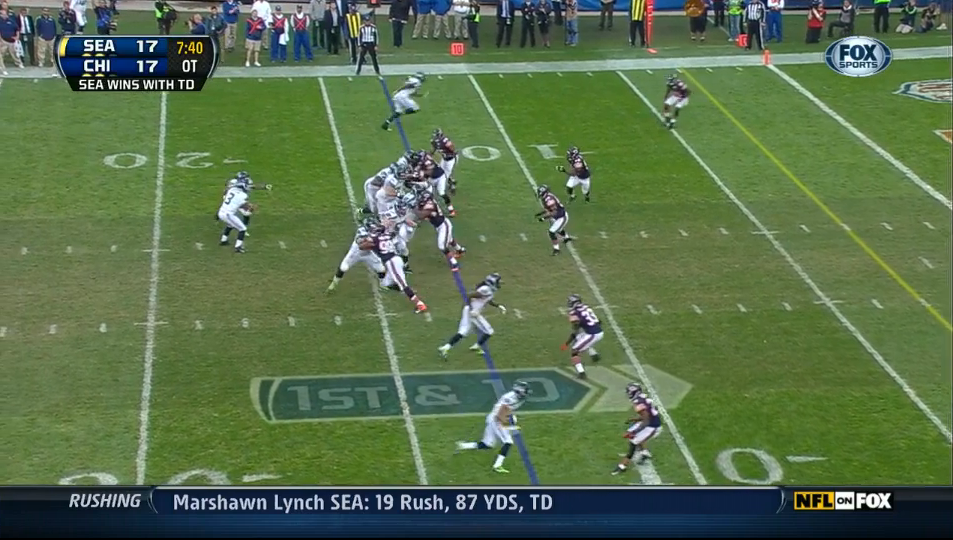 After a step or two, Rice goes to a slant-route and you can already see Tillman cheating a bit downhill a bit. 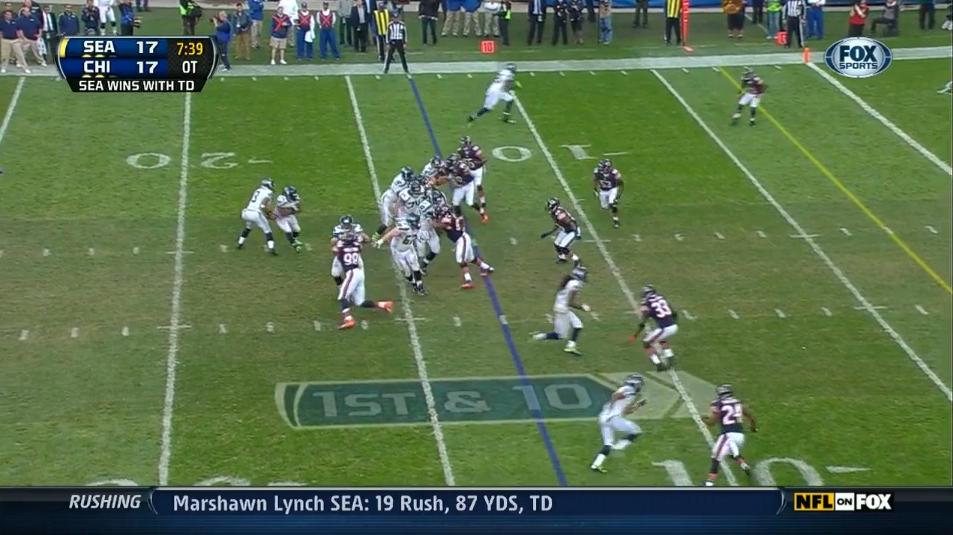 By the time Rice makes his cut upfield, Tillman is a step or two behind.

Also, keep your eye on Tate, to the right. 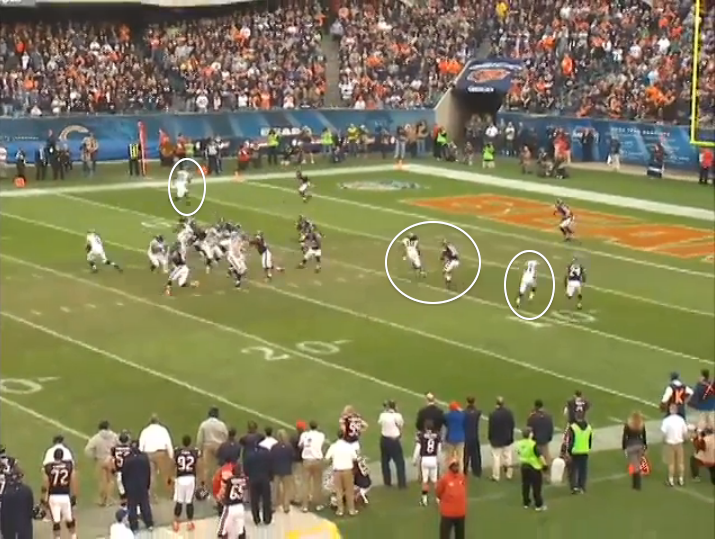 Wilson drifts left, just as he'd done on the play prior, and pump fakes to Anthony McCoy in the corner. This sticks Jennings to McCoy for the time being. The deep safety here just has an impossible choice, as he must decide to either stick with a post-route running Golden Tate or come down in coverage on Sidney Rice over the flats. He chooses to stay back. Rice now has several steps on Tillman. 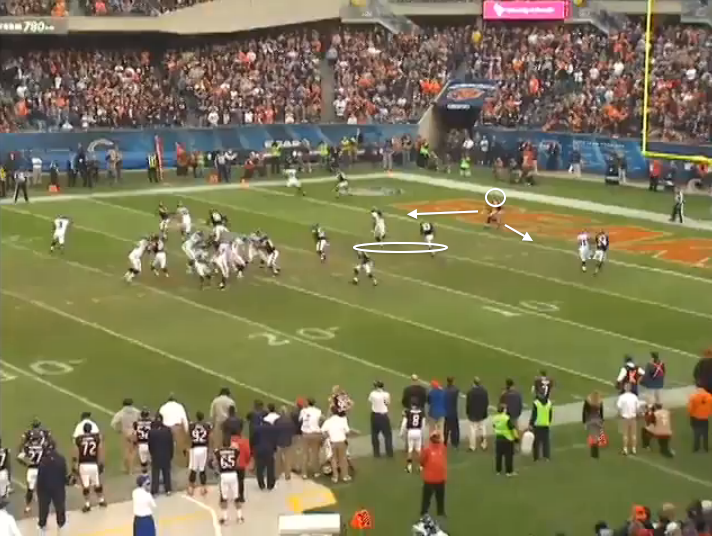 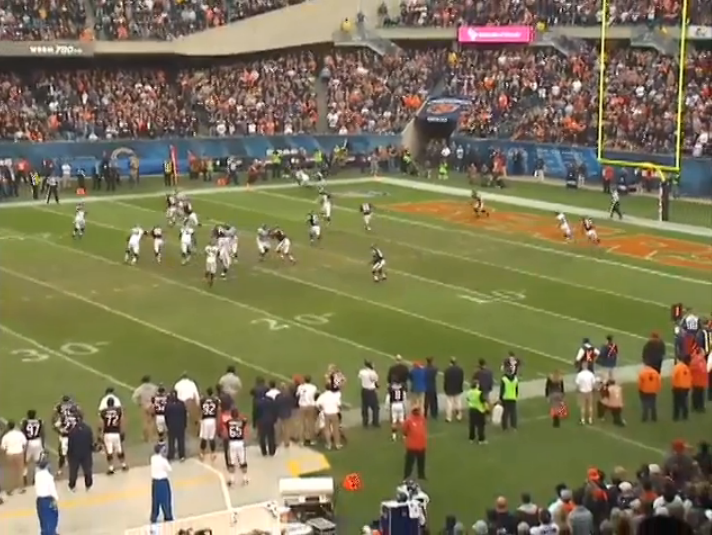 Wilson, after the game: "The last touchdown to Sidney Rice, we actually had the read option play on, but then we faked it and basically made it look like it was going to be the read option and Sidney Rice became open in the front of the end zone."

Play action is meant to manipulate a defense. Watch how effectively this play-action fake on the read-option look gets the Bears' linebackers to drop down and to the offensive right, leaving the intermediate left side of the field open for Rice. Without playaction here, you'd see linebackers dropping into zones and taking away throwing lanes.

Note the subtle pump fake by Wilson too, to keep Jennings from coming downhill to take away Rice before Rice could cross the goal-line.

Big thanks to David Hanson again for the giffage!

If you're looking for tickets to the upcoming game at the CLink or looking to catch the Hawks on the road, make sure you check out Field Gulls' tickets page, brought to you by our partners at TiqIQ.