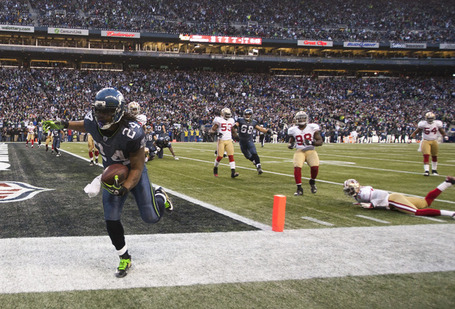 There is an argument that running back is a fungible position in the NFL, and that effective NFL RBs can be consistently drafted in the mid to late rounds. I’ve (without a shred of evidence) made the argument that maybe NFL scouting is just poor at identifying which college RBs will succeed in the NFL, and that is why you can draft them in the mid-late rounds. In this article, I wanted to test the assumptions that: 1) RBs are fungible, 2) effective NFL RBs are available to be drafted in later rounds, and 3) that NFL front offices are poor at identifying NFL caliber RB talent.

I evaluate five years of draft history from 2006-2010 (concentrating only on those backs in recent memory, and in the "pass happy" NFL era). I’ve decided to exclude the 2011 draft for the following reasons: 1) like other positions, there is a learning curve for RBs in the NFL and it is hard to assess players after only one year, 2) with the short offseason, players had less than normal time to learn offensive sets and coordination with blockers, and 3) we saw an inordinate number of season ending injuries among the 2011 draftees, in the preseason and early season - possibly related to the prolonged lockout and players not having ideal conditioning regimens.

I have excluded analysis of UDFA RBs as there is no reasonable way for me to determine the number of UDFAs who have churned through all the camps in the NFL, and thus no way to analyze the success rate of UDFA RBs (but it should be obvious that teams don't rely on finding their franchise RBs in the UDFA pool).

My subgroupings of successful RBs are wholly subjective; grading is pretty much only results-oriented – I am not evaluating vision, elusiveness, quickness, breakaway speed, catching ability, power or potential in any specific way, nor am I analyzing tape. Given the number of players involved in this analysis, I would assume that each person who reads this article will differ in the way they would rank at least several players. The point of this article is not to determine how players should be ranked, and the ensuing discussion should concentrate instead on the questions presented above – Are RBs fungible? Can you find a franchise-quality RB in the mid-late rounds? And, are NFL scouting teams poor at determining which players will succeed in the NFL?

For the purposes of this analysis, I have broken down player quality into 4 tiers:

- The first tier is RBs that I would call "franchise-quality RBs." Almost everyone would be satisfied with this player as their team’s starting RB, as in "I sure wish we had player X as our starter" or "if we lost our starter, I sure would be happy with player X." Knowing how they would perform at the NFL level, and in a vacuum (i.e. ignoring team needs), I wouldn’t think it a mistake if my team's FO spent a late first round pick on these players.

- The second tier is backs that I would term "successful NFL RBs," and have at least one of the following qualities: 1) has been a successful part of a backfield share, 2) has been a successful situational back, or 3) would qualify for the first tier excepting a history of injury (Steve Slaton comes to mind). Using the retroscope, I think of these players as previously worthy of a 2nd or 3rd round pick.

- The third tier is RBs that have been successful for short stints as a backup or a history of consistent but low level contribution. Mostly replacement quality, these RBs hang around in the league only because there aren’t enough 1st and 2nd tier RBs, and they are really only worth a late round (4-7) pick – again in retrospect.

- The fourth tier is backs that have had limited success in limited opportunities – basically non-factors in the league. When teams draft these players, two years later the GM asks the scout "Why did I listen to you about that guy? We could have drafted Doug Baldwin."

The year by year evaluation of RBs is quite long, so if you want to skip the gory details, after the jump search for the paragraph that starts with bold and italic text after a four line break…

In 2010, 15 backs were drafted, 3 in the first round. It is still quite early to stratify these players, but I’ll give my opinion.

Certainly, several players might prove themselves worthy of a better ranking, Spiller if he continues to progress as a WR, Best if he can avoid another (series of) concussion(s), and Starks based on his great playoff performance in the 2010 post-season. Many would probably argue about Tate, but he’s young, healthy, and the dropoff from Foster is pretty small. JMcKnight/ADixon/DKarim all had a small amount of effectiveness, but not enough yet in my eye to launch them into the discussion. The difficulty rating the 2010 draft class, and a brief look at what happened to the top 8 or so picks in the 2011 draft class convinces me that at the minimum, 2011 should have been excluded.

Beanie Wells, when healthy, looks like a 1st tier back, but hasn’t sustained it. Moreno, Brown, and Greene are all close to 2nd tier, mostly because of volume of opportunity, but all of them fail the eye test as franchise backs except when they are playing their very best football.

2008 was really a very very very deep draft and 28 backs were selected, 5 in the first.

What an exceptional year for RBs. If Hillis continues to fizzle next year, maybe he belongs in the second tier. Hightower was one of the toughest choices, he might be a 2nd tier guy, but I just don’t think a team would want to spend a 1-3 round pick on him for his production – he is not inspiring to watch. KSmith and Slaton have had stretches where they looked all of the world like franchise backs, but both were derailed by injuries – both still may get better. Maybe it’s a bit of homerism, but Forsett has been a good 3rd down back for 2 of his 4 seasons and decent in his other two. XOmon I think had an exceptional game at some point, but without looking up his stats, I just don’t think he qualifies for a significant contributor.

2007 was a very very very terrible year, although AP makes a valid attempt to salvage the class every season. 26 backs were selected, 2 in the first.

There is nothing higher than 1st tier for AP. Giants scored a bargain with Bradshaw at 250. There is probably a reasonable argument that Lynch is 2nd tier, especially if you are a Buffalo fan. But I’m pretty sure if Seattle could have drafted Lynch instead trading the pick away for Deion Branch, we would have loved it, so I’ll give him a 1st tier grade. Bush might have been 1st tier if not for McFadden.

Addai has struggled with injury, but he has performed as a franchise back when healthy, and he played a key role in the Colts Super Bowl season in 2006-7 as a rookie 1818 combined rushing and receiving yards and 10 TDs including the post season, with 143 combined yards in the Big Game – a player that pushes a team over the brink to a Super Bowl victory is absolutely worth a 1st round pick in my book. The renewed Reggie Bush in Miami might make an argument for him being a 1st tier RB, but I think he needs to have a similar follow up season (I wonder if it is an attitude change, or does New Orleans just have major flaws in its run game – see Mark Ingram this past season).


If you skipped the year-by-year babble, you can rejoin the conversation here. You might ask me, "What did I miss?", "So, that was a lot of information; what does that all mean?", or "I pretended to read it all but it was too much information in a difficult to appreciate format; would you help me out?" Well, let me summarize…

First round picks are highly likely to be significant contributors: Over five years of the draft from 2006-2010, 111 RBs were drafted, 17 in the first round.

Of the first round selections, 47% (8/17) are franchise-quality RBs, and 82% (14/17) are franchise-quality or successful NFL RBs. The 18% (3/17) of first round RBs who could be considered poor selections were Laurence Maroney (21st overall pick), Knowshon Moreno (12th), and Donald Brown (27th), all of whom were 3rd tier RBs and have had enough success in the NFL to remain on a roster with significant playing time beyond the average 2-3 year career of an NFL player.

It is rare for a first round RB to be a bust.

The 6 successful backs not selected in the first two rounds? Ahmad Bradshaw (7th round), Michael Bush (4th), Jamaal Charles (3rd), Kevin Smith (3rd), and Steve Slaton (3rd), and Peyton Hillis (7th). (Note: Four of these mid-late round selection successful RBs were selected in the deepest RB draft in years, and three of them [Charles, Smith, and Slaton] were drafted as the 8th, 10th, and 11th backs selected behind McFadden, Jonathan Stewart, Felix Jones, Mendenhall, CJ2K, Forte, Ray Rice, and the only real miss in the first 11, Jacob Hester).

13/16 (81%) of franchise quality RBs were drafted in rounds 1 and 2. And if you draft an RB (appropriately) in the first two rounds, you have about a 45% chance of getting your franchise back. But if you rely on mid-late picks (rounds 3-7), you have a slightly less than 4% chance of getting a franchise back. There is a 12.3 fold success rate on a round 1-2 pick vs. a round 3-7 pick – an incredibly strong odds ratio.

RBs are not fungible: This conclusion may seem to be bit of a stretch, but follow my logic: if draft-eligible RBs were really fungible, 1st and 2nd tier RBs would be evenly distributed throughout the draft, or even weighted towards the later rounds because teams would wait to draft them, and would never waste draft capital on a player.

The reality is that NFL front offices are very, very good at identifying which backs will be elite or even successful, and all of these players are drafted in the first two rounds.

Among the RBs drafted in the 1st and 2nd round, and among the RBs that have proven to be effective NFL players, you can argue there is some amount of fungibility among similar RBs, but no one can argue that you could replace Adrian Peterson, LeSean McCoy, or Arian Foster with Knowshon Moreno, BenJarvus Green-Ellis, or Ryan Torain (or whatever the Redskins flavor of the day is).

I think the answers to the original questions I posed are pretty clear:

1) Are RBs fungible? RBs available in the draft are not fungible. Elite college prospects and RBs that have proven success in the NFL may to some extent be fungible, though likely only among players that share similar ability (as broad as that might be).

2) Can you find a franchise-quality RB in the mid-late rounds? The odds of finding a franchise quality RB in rounds 3-7 are extremely low, less than 4% per pick. Franchise-quality RBs are almost always drafted by the end of the second round (81% drafted by the 64th pick). Successful NFL RBs that contribute significantly to the team are almost always gone by the end of the third round.