Seattle Seahawks: Each Game in a Picture

Share All sharing options for: Seattle Seahawks: Each Game in a Picture

They say that a picture says a thousand words. They also say that Eddie Murphy says A Thousand Words in his new hit comedy, coming soon to a theater near you. **SBN Editor pulls gun away from back of my head**

It's the off-season, which means that it's a time for reflection. A time to remember the season and learn from it and never forget exactly how the Seahawks wound up at 7-9. A time... well, come on... it's a time for me to think of shit to write when there aren't any games.

But this is a fun exercise because it was easy to write (about 15 words plus this) and it's really easy for you to read. Even if you don't speak English, you can understand this article. Well, not this part. Or this part. But the pictures part. You don't have to read a picture, because it says a thousand words. Why do you think I watch movies and don't read books?

Seattle played 16 games. They won almost half of them. They lost the rest. As best I could, here is each game in a single picture. I can't wait to hear you tell me how much of an idiot I am for choosing this picture and not that picture.

Just remember that the following takes about 18 seconds. It took me a lot more than 18 seconds to make it so I hope it's mildly enjoyable.

(If I could have asked God for just one picture from this game, it would have been Doug Baldwin telling the Giants fans "Shhhh") 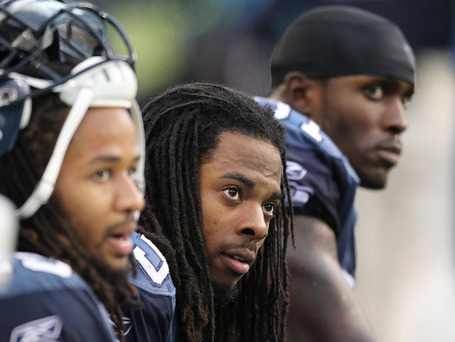 (They're sweeping Skittles, by the way)

Follow me on Twitter and check out my website. Please? I'm almost at 300 followers. Do you know how many readers Field Gulls has? A lot more than 300. To be fair, I don't tweet about Seahawks nearly as much as Danny @FieldGulls. I've written more words now about myself than I have about the Seahawks. My bad.