I don't really have any introduction for this edition. I put so much time into it, I guess I'll let the reviews speak for themselves.

By the time you get to the end of this, I'm halfway through week four and over 20% done with the project. Hope you are enjoying it. Also, see what's new at KennethAuthor.com, including The Perfect Date and Social Media Tips for the Blackout Drunk. 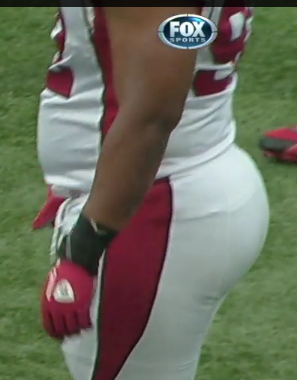 By the time you read this, Charlie will have already written about it. That's why I do butt pics, I guess. But let's not forget that Earl Thomas had an INT taken away by a Brandon Browner penalty or that Kam did this to Todd Heap: 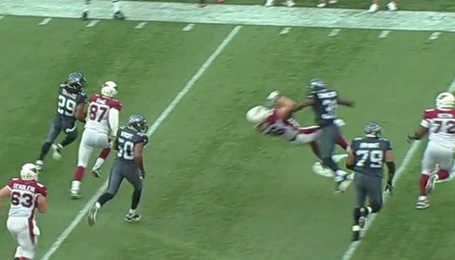 The Seahawks haven't had many number one wide receivers in their history. But Sidney Rice has all the tools. He caught this off of Adrian Wilson's face: 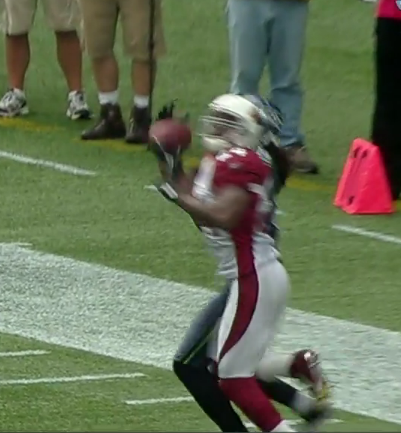 On this run you'll see Carpenter, McQuistan, and Unger around Marshawn Lynch, blocking. 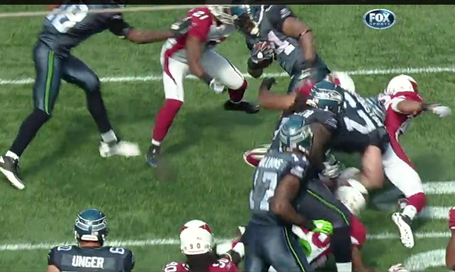 That's 20 yards down field. Great blocking on this play.

Larry Fitzgerald touchdown. It's not so much Brandon Browner getting burned by a superior player... but even the Hawks best player, Earl Thomas, can't up there either: 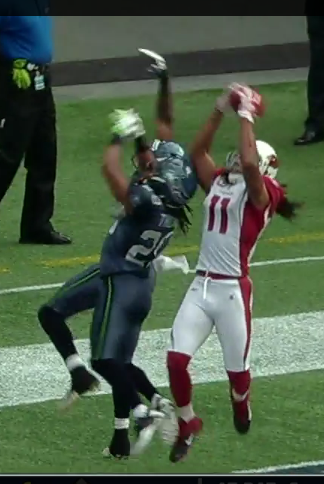 Seahawks catch a break at the end of the half. Kevin Kolb has a wide open Todd Heap in FG range, but he goes downfield instead and never looks at Heap. Marcus Trufant with the interception. 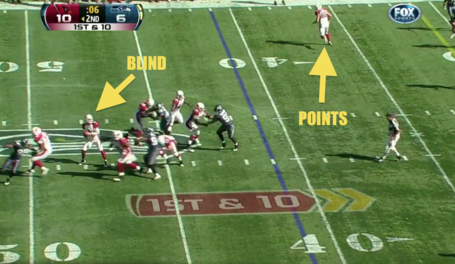 Chalk up one of Taravris Jackson's 13 interceptions on a desperation "Whatever" heave at the end of the half.

Jay Feely misses for the 2nd time of the game.

Kam Chancellor intercepts Kevin Kolb to essentially end the game. Hawks got luck that the Cards missed their opportunities, because they had a few of them and blew it. Sidney Rice is an exceptional wide receiver. Jackson didn't play bad. Browner had a hard time keeping up with Fitzgerald.

Matt Hasselbeck with a first quarter touchdown pass to Craig Stevens. Sometimes he does look like classic Matt. 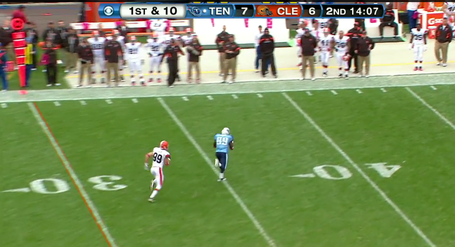 But when he gets past this without going out of bounds, its an 80 yard TD. 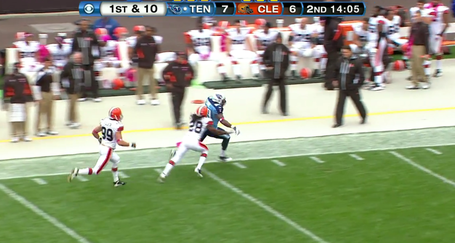 The Browns have Joe Haden and what seems like it could be a decent pass defense, but now Nate Washington has a 57 yard catch and run. The "allowing of the big play" thing is so reminiscent of recent Seahawk defenses.

Chris Johnson had 101 yards on 23 carries, but got 25 yards on one first quarter run.

Jordan Babineaux with a 97 yard INT return for a TD.

Easily one of the worst games that I've watched this season. All you need to know is: Colt McCoy threw 60 passes.

The combined record of these teams in the first half of the season was 11-5. In the second half: 4-12.

Andy Dalton is sacked and fumbled and the bal is recovered and returned for a Buffalo touchdown, but after further review is turned into an incomplete pass.

Andre Caldwell can't hold onto a pass and its snatched up by the Bills Bryan Scott, who returns it for the first TD of the game with a few minutes left in the first half. At this point, the Bills lead the NFL in interceptions with 7. They finished the year with 20. A minute later they get their eighth.

This is a catch by A.J. Green. He already had a 57-yarder in this game that was at least as impressive as this. 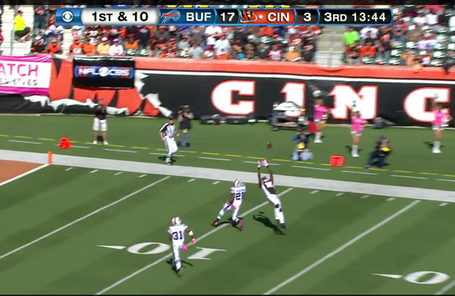 If you don't think Green is an elite wide receiver, you're just wrong.

On 3rd and 3 with under a minute, this stretch by Dalton proves to be the difference in the game. 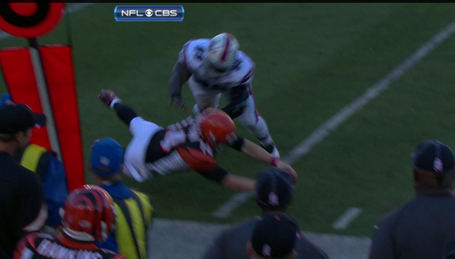 Mike Nugent a 43-yard game-winning field goal and the Bills blew this game. I'll never forget when they were America's Team.

Last week the Texans lost an exciting game to the Saints and the Steelers barely beat the Colts. Both teams are 2-1.

Houston drives 95 yards to open the game and take a 7-0 lead.

It's not good when your own star player tackles himself/gives himself up. Andre Johnson missed nine games this season with injury. 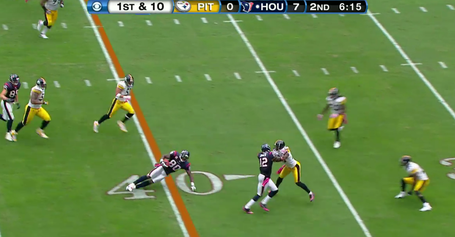 That was the last time of the year that they had Andre/Arian Foster/Matt Schaub/Mario Williams all healthy.

The Steelers were down at the Texans 6 yard line but a 15 yard penalty prevents them from scoring a touchdown and they attempt an end-of-half field goal instead. It is blocked and returned for a Texans touchdown but that's called back for this block in the back penalty: 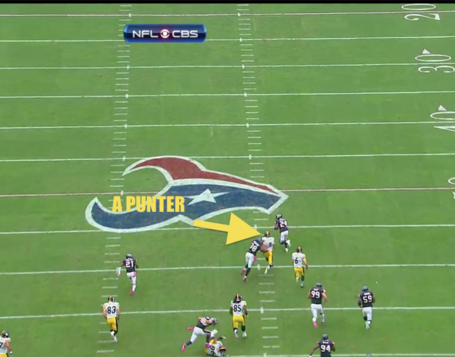 Danieal Manning (according to the announcing crew) blocks the kick and then blocks the punter who had no chance at making a play.

Pittsburgh scores 10 unanswered and it's tied at 10 with a quarter left.

Foster scores on a 42-yard TD shortly thereafter. The Steelers defense is not at all what it used to be.

I finally remember to focus on Mario Williams and he shows incredible speed off of the edge and gets a sack on Ben Roethlisberger that forces a Steelers punt with six minutes left.

Jonathan Joseph intercept Roethlisberger with a minute left and returns it for a TD, but roughing the passer...

The Steelers defense is a step behind where the Texans defense was at this juncture and I do wonder if the Steelers window is closing fast.

3:20 in the first and a Cam Newton pass is deflected and intercepted by D.J. Moore and returned for a TD.

Three minutes later he hits Steve Smith on a bomb and runs the ball in for a TD two plays later, showing why he could become the best player in the NFL.

With five minutes left in the half, Jay Cutler just threw his 2nd pass of the game and the Bears still lead 24-17.

Carolina closes it to 24-23 with a quarter remaining, but had a third quarter FG blocked. If they were more efficient in the red zone, the Panthers might have scored enough points in 2011 to overcome their defense.

After a Cutler INT, Olindo Mare misses a 52-yarder.

The Panthers squandered opportunities and lost a game they could have won and got a quality early-season victory but they lost. I do think the Panthers will compete for the playoffs next season however.

I can't say I'm all that interested in watching this one. No skipsies :(

Ryan Torain scores and it's 14-0, mid-2nd Q. The Rams have such a terrible offense, but they have an advantage over other terrible teams because they have Sam Bradford. If they get him a LT and a WR in the draft, they'll be much improved in 2012.

Austin Pettis is leveled on a punt return and it's the most exciting play of the game. 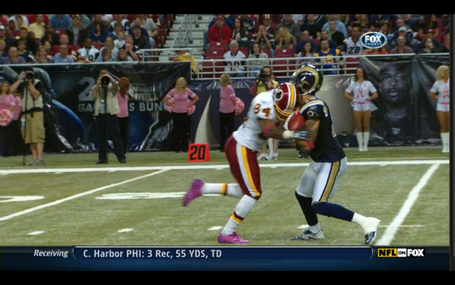 Wow, the Rams scored a touchdown on third-and-goal from the 15. I think that's the first time I've seen them get 15 yards all day. They blew their opportunities (and they had good ones) to tie the game, however.

Just wanted to point out those records.

It's halftime. Chiefs lead 9-7. Game is about that good to watch.

If this game were my dating profile, it would say Likes: Percy Harvin, Adrian Peterson. Dislikes: Donovan McNabb, Matt Cassel.

Vikings have a chance to take the lead late in the fourth, but then realized that they were relying on Donovan McNabb.

Just trying to make a push to do two more games today.

It's amazing how effortless Michael Vick makes a deep pass look. I feel like if he went to the Combine TODAY, he'd still amaze people.

The Eagles fall an inch short of a touchdown and then on the next play Ronnie Brown has a stupid fumble. Hold the ball? 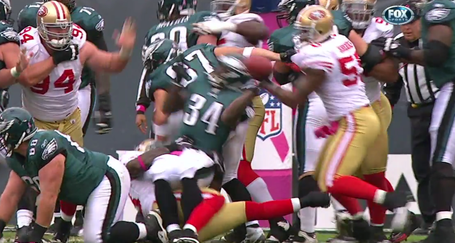 It's all Philly. Akers has had a kick blocked and missed a FG and it's 23-3 with 9 minutes left in the third.

By my count, the Niners used eight offensive plays to score 14 unanswered points on two drives.

DeSean Jackson is tackled by his shoelaces and just misses a looonnngg TD catch then Alex Henery missed a 39 yard field goal.

Henery missed ANOTHER short field goal and it's a six-point game, not a nine-point game. (There are no 9 pointers.)

The Eagles should have won this game going away, but holding penalties, fumbles, missed opportunities, and missed field goals cost them the W. Philly was talented enough athletically to beat the best, but bone-headed mistakes are the reason they missed the playoffs.

A 55-yard "pass" for Blaine Gabbert was thrown to Mike Thomas at basically the line of scrimmage and then run 55 yards.

The other Zach Miller catches a TD on a similar play that our Zach Miller dropped the ball. I also notice that they are both 86.

Daryl Smith intercepts Drew Brees deep in Saints territory and can't get past Brees to score and we all knew that was a major mistake, right? You've GOT to score there if you're Smith. 14-10 Saints.

Blaine Gabbert had a terrible game, going 16 of 42. They have no receivers but he's also really bad.